Age-related macular degeneration (AMD) is the leading cause of blindness in the elderly population and the prevalence is increasing in the world [1]. Drusen, a focal deposition of acellular debris between the retinal pigment epithelium (RPE) and Bruch’s membrane, is the clinical hallmark and usually the initial clinical finding of AMD. Amyloid β (Aβ) is known to be found in drusen [2, 3]. In addition, the deposition of Aβ in the subRPE space is also concomitant with several features of AMD in a mouse model of Alzheimer disease (AD) [4, 5]. It has been suggested that Aβ in drusen may be an important contributor to the development of AMD.

Drusen in AMD and senile plaque cores in AD are similar in that deposition of Aβ is found in extracellular space at later stages of both diseases. The role of extracellular Aβ in RPE is known to alter the tight junction without apoptosis [6]. Recent studies, on the other hand, suggest that accumulation of intraneuronal Aβ contributes neuronal apoptosis and may be an early event in the pathogenesis of AD [7, 8]. In this regard, we recently reported that intracellular Aβ contributed to the breakdown of outer blood-retinal barrier (BRB) in 5XFAD mice, a mouse model of AD, and suggested that intracellular Aβ could be also a key contributor to the development of AMD [9]. However, the precise mechanism of intracellular uptake of Aβ in RPE remains to be elucidated.

Receptor for advanced glycation end products (RAGE), a member of the immunoglobulin superfamily, is a multi-ligand receptor capable of binding diverse range of molecules including Aβ [10]. The receptor is known to be highly expressed in the RPE and levels of RAGE are significantly elevated in AMD, especially in RPE adjacent to drusen [11, 12]. RAGE is also known to participate in the uptake of Aβ from the circulation into the brain by endocytosis and transcytosis in endothelial cells [13, 14]. Recently, it has been suggested that RAGE-mediated signaling contributes to intraneuronal transport of Aβ [15]. Thus, we hypothesized that RAGE could contribute to intracellular transport of Aβ in RPE. If Aβ uptake is mediated by RAGE in RPE, anti-RAGE therapy could inhibit intracellular accumulation of Aβ, and subsequently prevent the breakdown of tight junction in RPE. This can expand the application of anti-RAGE therapy from AD to AMD [16, 17].

We have recently demonstrated that Aβ, endogenously generated from 5 mutant transgenes, accumulated in intracellular space at the RPE layer with thickened Bruch’s membrane and Aβ deposits, thereby attenuating tight junction of RPE in aged 5XFAD mice [9]. Exogenous oligomeric Aβ (OAβ)42 injection into subretinal space is also known to break tight junctions of RPE and result in disorganized and irregular staining of both ZO-1 and occludin on days 3 to 15 post-injection in both young and aged mice [6]. These findings led us to probe whether extracellular Aβ translocates into intracellular space and subsequently induces breakdown of tight junction of RPE in vivo. 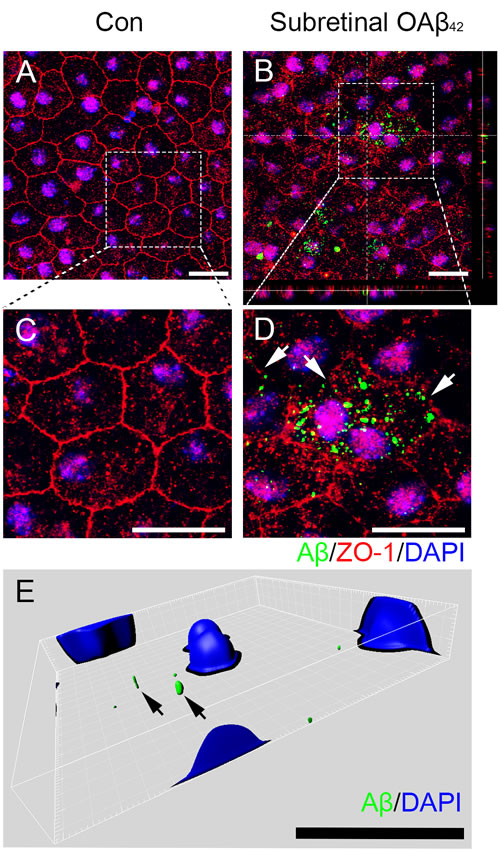 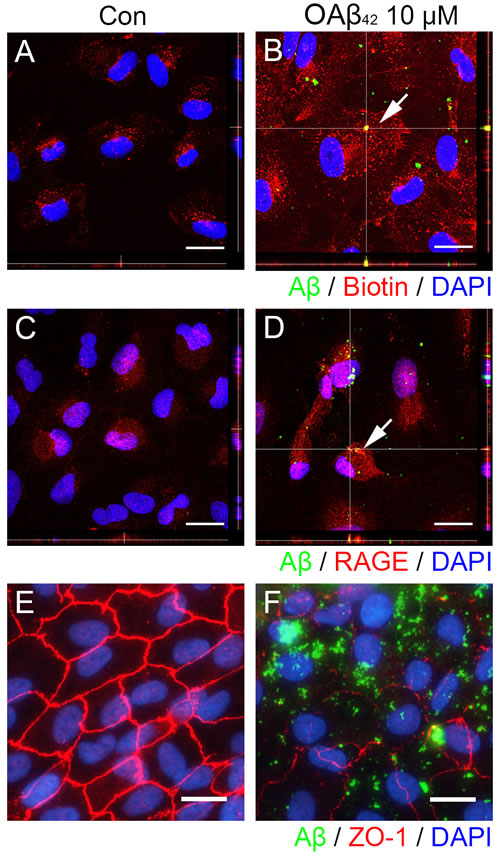 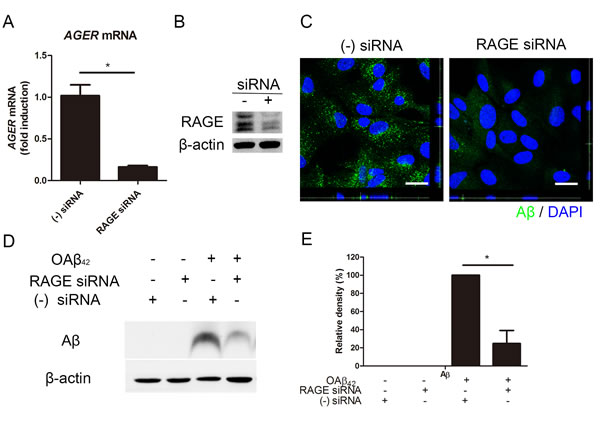 RAGE is known to activate multiple downstream signaling pathways as a signal transduction receptor [18]. Based on the previous study [15], we demonstrated that Aβ-induced RAGE signaling activation might lead to Aβ uptake into RPE. We first examined the effect of Aβ treatment on phosphorylation of p38 MAPK. Treatment of OAβ42 for 30 min showed a dose-dependent increase in phosphorylated p38 MAPK although it did not affect total protein levels of p38 MAPK (Figure 4A). 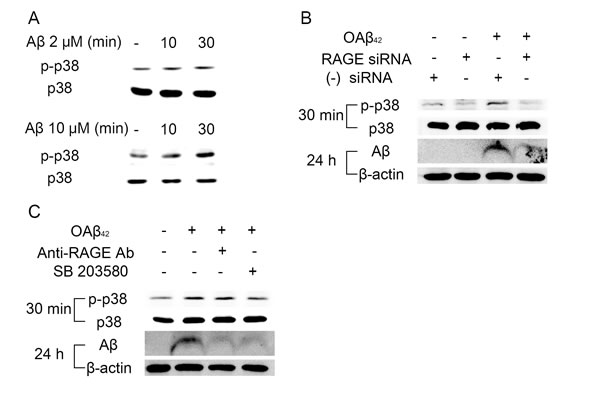 Figure 4: RAGE-mediated p38 MAPK signaling contributes to endocytosis of Aβ in RPE. A. RPE cells were treated OAβ42 2 μM or 10 μM for 30 min. Phosphorylation of p38 MAPK is increased at 30 min. B. RAGE siRNA was transfected in ARPE-19 cells. Negative siRNA was used as a control. RPE cells were treated OAβ42 10 μM for indicated time (30 min and 24 h). Phosphorylation of p38 MAPK and intracellular Aβ uptake are decreased in RPE with RAGE siRNA compared to RPE with negative siRNA. C. RPE cells were pretreated with anti-RAGE neutralizing antibody (20 μg/ml, 2h) and SB 203580 (10 μM, 30 min) and were treated with OAβ42 10 μM for indicated time (30 min and 24 h). Anti-RAGE neutralizing antibody and SB 203580 decrease intracellular Aβ in RPE. β-actin was used as an internal control. Figures were selected as representative data from three independent experiments.

To determine whether inhibition of intracellular Aβ uptake could prevent Aβ-induced tight junction breakdown in RPE, we analyzed tight junction expression in RPE using western blot. We demonstrated that intracellular uptake of exogenous OAβ42 was decreased in RPE with siRNA-mediated knockdown of RAGE (Figure 4B). Indeed, siRNA-mediated knockdown of RAGE diminished the uptake of Aβ which subsequently inhibited intracellular Aβ-induced tight junction breakdown in RPE (Figure 5A and 5B). Consistent with these data, treatment of p38 MAPK inhibitor (SB 203580) and anti-RAGE neutralizing antibody also showed protective effect on Aβ-induced decrease of occludin expression in RPE (Figure 5C).

To determine the role of RAGE on barrier function of RPE after Aβ treatment, we measured transepithelial resistance (TER) in RPE for 48 h. The mean initial TER of controls was 46±4.5 ohms·cm2 when they reached a plateau. Anti-RAGE neutralizing antibody was sufficient to inhibit a decrease of TER during 48 h after OAβ42 treatment (p < 0.05; Figure 5D). In addition, tight junction breakdown with ZO-1 disruption after OAβ42 was also attenuated when ARPE-19 cells were treated with either p38 MAPK inhibitor or anti-RAGE neutralizing antibody (Figure 5E). These data suggested that intracellular Aβ uptake by RAGE contributed to breakdown of tight junction in RPE. 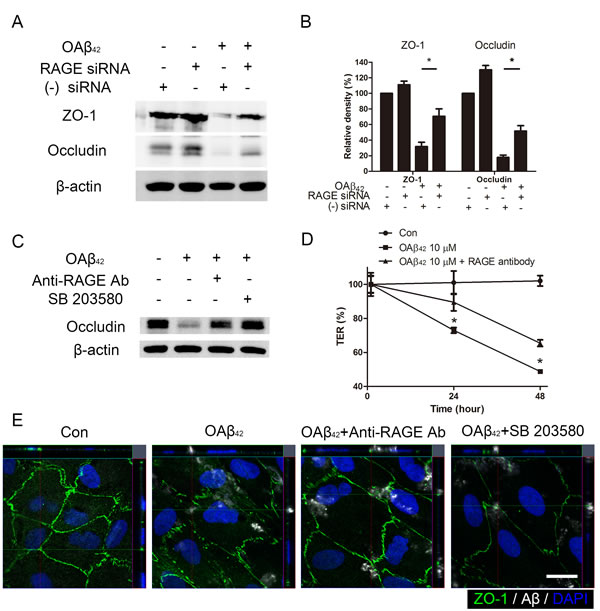 Regarding to Aβ uptake by RPE cells, the mechanism of intracellular uptake of exogenous Aβ is not established. Although the main role of RPE is phagocytosis, RPE phagocytosis showed a remarkable specificity toward ROS via αvβ5 integrin [20, 21]. There were also several endocytotic pathways suggested as possible uptakes of Aβ in neurons and endothelial cells, including α7-NAch receptor [22], NMDA receptor [23], LDL receptor-related protein 1 [24], and RAGE [14]. Among these candidates, we demonstrated that RAGE contributed to intracellular Aβ uptake in RPE. RAGE is also important in retinal aging [25]. It is known that RAGE distributed at apical membrane of the RPE [11, 26]. In line with our results, Aβ/RAGE-mediated p38 MAPK signaling contributes to Aβ transport and neuronal dysfunction [15]. Activation of endocytosis is essential in regulating the p38 MAPK activity in endothelial cells [27]. Despite the evident role of RAGE in endocytosis of Aβ in this study, phagocytosis or other receptor mediated endocytosis could also contribute to intracellular uptake of Aβ. In addition, we also hypothesized that RAGE-mediated signaling itself (i.e. GSK-3β or NF-κB related signaling pathway) could affect tight junction or Aβ-related pathology in RPE. Thus, those Aβ-related mechanisms on RPE pathology should be investigated in further study.

The limitation of the study is that ARPE19 cells generate less effective tight junction than human fetal RPE (hfRPE) cells for in vitro study. It is also known that the staining with occludin in ARPE-19 cells is not good as that in hfRPE [28]. Thus, it is better to show the distribution of ZO-1 tight junction protein in immunocytochemistry for tight junction evaluation in ARPE-19 cells. Nonetheless, this study for the first time demonstrated that intracellular Aβ uptake was mediated by RAGE via the RAGE/p38 MAPK-mediated endocytosis in RPE.

In conclusion, intracellular Aβ uptake was mediated by RAGE in RPE. Intracellular Aβ contributed to breakdown of tight junction in RPE via the RAGE/p38 MAPK-mediated endocytosis. Blockade of RAGE with anti-RAGE antibody could block the intracellular accumulation of Aβ, and subsequently prevent the breakdown of tight junction in RPE. Thus, we suggest that blockade of RAGE can be a potential therapeutic target in AMD. Further study is warranted to develop new modality of RAGE-specific inhibitor for the treatment of AMD.

All animal experiments in this study were in strict agreement with the Association for Research in Vision and Ophthalmology Statement for the Use of Animals in Ophthalmic and Vision Research and the guidelines of the Seoul National University Animal Care and Use Committee. Six-week-old, pathogen-free male C57BL/6J mice were purchased from Central Lab (Seoul, Korea).

OAβ42 solution were generated as the previously described method [9]. Aβ42 and FITC labeled Aβ42 (62-0-80B and 62-0-82B) were dissolved in hexafluoro-2-propanol (Sigma Aldrich, St. Louis, MO, USA) to a final concentration of 1 mg/ml at RT for 3 days. The peptide was aliquoted and dried under vacuum for 1 h. The aliquoted peptide was dissolved in DMSO to a final concentration of 2 mM. The protein concentration was measured using a BCA protein assay kit (Pierce Biotechnology Inc.). The Aβ42 stock in DMSO was diluted directly into DMEM/F12 at 10 μM, and incubated for 24 h at 4 oC to make OAβ42.

Biotinylation of cell membrane proteins was performed as previously described method [15]. ARPE-19 cells plated in 8-well culture slides were washed with PBS and incubated with PBS containing 300 μg/mL sulfo-NHS-SS-biotin at RT for 30 min. The biotinylation of membrane proteins was quenched using 1 M glycine in PBS at 4 oC for 15 min. After additional two brief wash with 100 mM glycine in PBS to remove the residual biotin, cells were incubated with OAβ42 at 37 oC for 1 h. Then, to terminate uptake of biotinylated proteins, cells were washed with cold NT buffer (150 mM NaCl, 1mM EDTA, 0.2% BSA, and 20 mM Tris, pH 8.6). Then, cells were incubated with 50 mM MesNa/NT buffer at 4 oC for 30 min.

The measurement of TER was performed by impedance analysis using EVOM2 TER (World Precision Instruments). Briefly, the cell covered transwell filters (0.4 μm, Corning Inc., NY, USA) coated with laminin were placed in this setup using 12-well plate. After stabilization of TER value on plateau, TER was measured with 10 μM OAβ42 and anti-RAGE neutralizing antibody (20 μg/ml) for 48 h. The TER value just after treatment was normalized to 100% for relative analysis.

Total RNA was isolated from RPE cells using TRIzol reagent according to the manufacturer’s instructions. cDNA was prepared with High Capacity RNA-to-cDNA kit. Real-time PCR was performed with StepOnePlus Real-time PCR System with TaqMan® Fast Advanced Master Mix and specific Gene Expression Assays (AGER and GAPDH). All procedures were performed in accordance with the MIQE guidelines. All material and machine used in Real-time PCR was purchased from Life Technologies.