Bladder cancer is one of the most common leading causes of cancer-related death in the world [1, 2]. Surgery, radiation therapy and chemotherapy are current major therapies for the treatment of patients diagnosed with bladder cancer but survival rate remains disappointed [3, 4]. One of the important reasons is lack of full understanding of the mechanism to treat bladder cancer. Recent studies suggest many oncogenes and tumor suppressors including long non-coding RNAs (lncRNAs) are key regulators for bladder cancer development. It indicates that lncRNAs may be novel indicators for treatment of bladder cancer.

Long non-coding RNAs (lncRNAs), which are greater than 200 nucleotides in length, involve in the development of various human diseases, especially in cancers [5–9]. PVT1 is upregulted in prostate cancer and associated with cancer development [10]. In ovarian cancer, PVT1 may be a vital downstream target for therapy [11]. Besides, PVT1 promotes progression of gastric cancer and hepatocellular carcinoma [12–14]. Furthermore, PVT1 overexpression acts independently of MYC to promote cell proliferation and suppress apoptosis in ovarian and breast cancer [15]. However, whether PVT1 also participates in development of bladder cancer is still unknown and needed to be studied.

Tetracycline-inducible system is the most widely utilized regulatory system and may be a useful tool in the emerging era of medical synthetic biology [16, 17]. The inducer, doxycycline, is nontoxic and used widely in preclinical and clinical studies [16]. It can control the expression of gene and may give us ideas to treat bladder cancer.

In this study, we found that PVT1 was upregulated in bladder cancer tissues and cells, and functioned as an oncogene in bladder cancer. shRNA sequences targeting PVT1 controlled by synthetic “tetracycline-on” switch suppressed the expression of PVT1 in response to different concentration of doxycycline and inhibited progression of bladder cancer.

PVT1 was upregulated in bladder cancer tissues, cells and its correlation with clinical pathologic factors

The relative expression level of PVT1 was detected by performing real-time qPCR in a total of 32 patients with bladder cancer. Compared with normal counterparts, the PVT1 expression was upregulated significantly in 62.5% (20 of 32) of cancer tissues (P < 0.01) (Figure 1A and 1B). Compared with the SV-HUC-1 cell line, the PVT1 expression was increased significantly in bladder cancer cells, T24 (P < 0.01) and 5637 (P < 0.001) (Figure 1C and 1D). As Table 1 showed, upregulation of PVT1 was highly correlated with bladder cancer histological grade (P = 0.028). TNM stage also had a high association with upregulated expression of PVT1 (P = 0.002). But gender, age, tumor size and lymph node metastasis had no associations with PVT1 expression level. These data indicated that long non-coding PVT1 may function as an oncogene in bladder cancer. Patients’ clinical parameters are listed in Table 2. 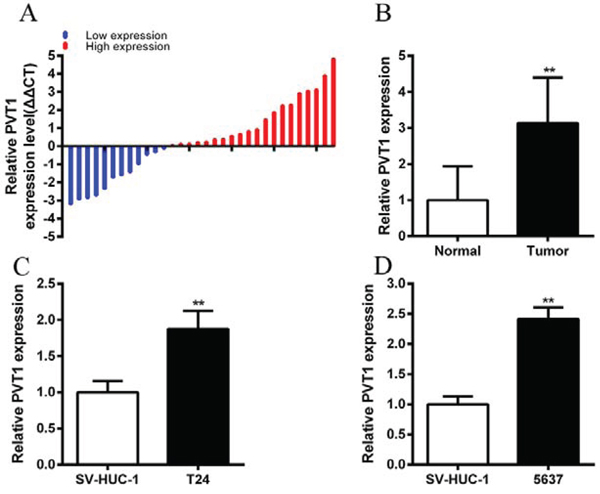 Table 2: Summary of clinicopathological features of tissues of bladder cancer

To investigate functional role of PVT1 in bladder cancer cells, qRT-PCR was used to measure the relative expression level of PVT1 at 48 h post-transfection in T24 and 5637. As shown in Figure 2A and 2B, the relative expression level of PVT1 in T24 and 5637 cells were down-regulated significantly by si-PVT1 (p < 0.001 in two cell lines). CCK-8 assay was performed to observe whether si-PVT1 suppressed the proliferation of T24 and 5637 bladder cancer cells. The results showed that si-PVT1 suppressed cell growth significantly in bladder cancer cells (p < 0.001 in two cell lines) (Figure 3A and 3B). Then, a more specific and sensitive method [18, 19], EdU assay, was carried out to further detect function of PVT1 in promoting cell growth. As shown in Figure 4A, more EdU positive T24 or 5637 cells in si-NC group and less EdU positive T24 or 5637 cells in si-PVT1 group were observed after transfection of the related siRNAs. EdU assay also showed that the number of EdU positive cells in si-PVT1 group was reduced by 40% in T24 (P < 0.01) and decreased by 50% in 5637 (P < 0.01) (Figure 4C and 4D). These results indicated that PVT1 promoted cell proliferation in bladder cancer. 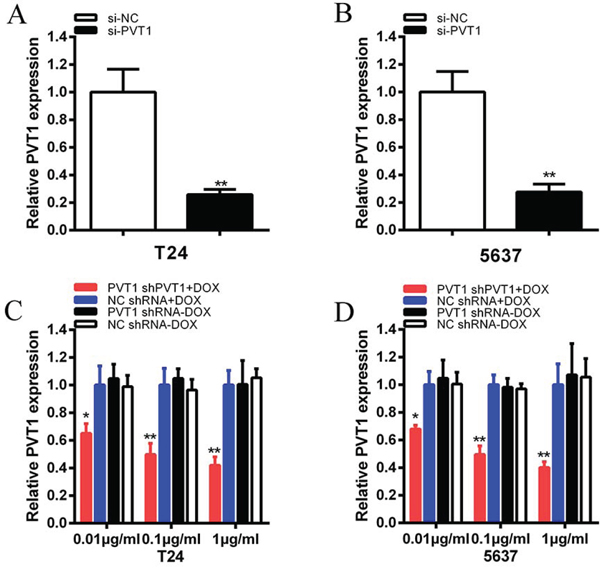 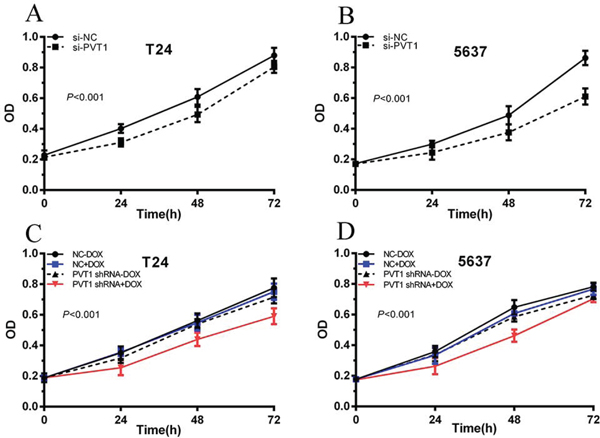 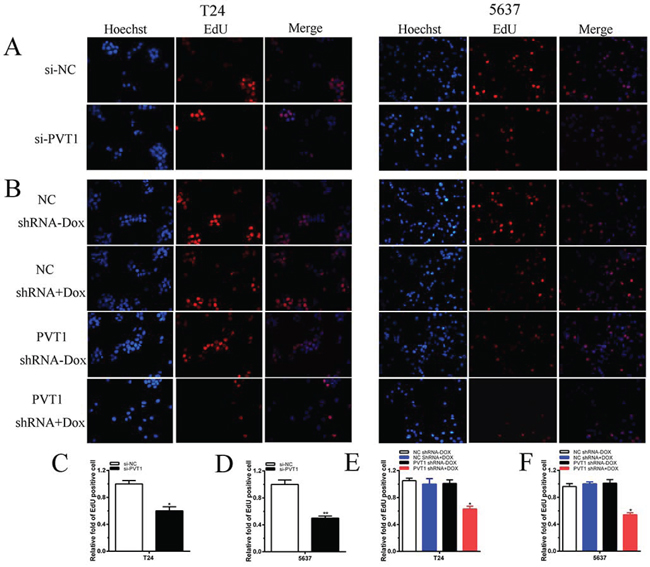 To investigate whether PVT1 suppresses apoptosis of bladder cancer cells, cells were transfected with si-PVT1 or si-NC and cell apoptosis was detected by the caspase 3 enzyme-linked immunosorbent assay (ELISA), Hoechst 33258 staining assay and flow cytometry assay. Compared with cells transfected with si-NC, the activities of caspase 3 (P < 0.01 in T24 cells; P < 0.001 in 5637 cells) and the apoptosis ratio (P < 0.01 in two cell lines) were increased significantly in cells transfected with the si-PVT1 (Figure 5A, 5B and 5G; Figure 6A and 6B). These results confirmed that PVT1 inhibited cell apoptosis in bladder cancer. 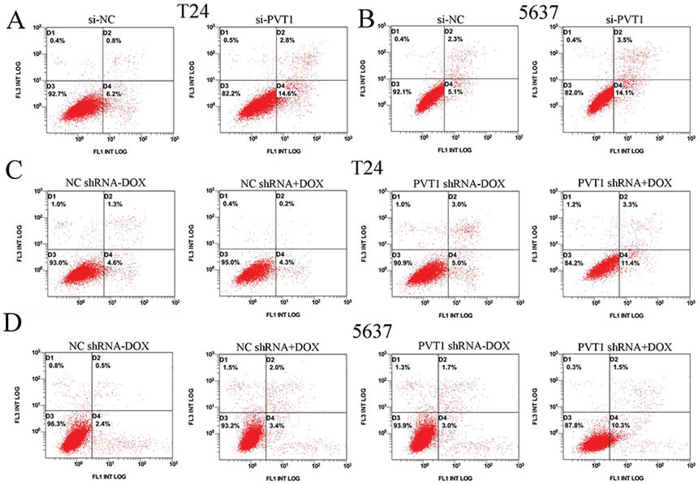 Tetracycline-inducible PVT1 shRNA down regulated expression of PVT1 in vitro

The relative activity of caspase 3 was detected using ELISA assay. The apoptosis ratio was tested using Hoechst 33258 staining assay and flow cytometry assay. The relative activity of caspase-3 was significantly increased when cells were treated with the PVT1 shRNA induced by 1 ug/ml doxycycline (P < 0.01 in two cell lines) (Figure 5C and 5D). In the results of Hoechst 33258 staining assay, the number of apoptotic cells in group transfected with tetracycline-inducible PVT1 shRNA was significantly larger than group transfected with the negative control vector (P < 0.01 in two cell lines) (Figure 5E, 5F, 5H and 5I). Compared with the negative control group, the number of early apoptotic cells was increased significantly in tetracycline-inducible PVT1 shRNA group (Figure 6C and 6D).

LncRNAs involve in gene regulation and extend our understanding of the biological behavior in diseases inclusive of cancers [20, 21]. As a famous oncogene in other cancer, PVT1 is located in chromosome 8q24 and is closely near MYC which promotes progression of bladder cancer [22, 23]. PVT1 is overexpressed in gastric cancer and promotes cell growth through repressing p15 and p16 [13]. Upregulation of PVT1 in hepatocellular carcinoma activates cell proliferation through stabilizing NOP2 [24]. Mouse PVT1 locus activates T lymphomagenesis through encoding several overexpressed microRNAs [25]. However, the association between PVT1 and bladder cancer is not clear.

In this study, we created the shRNA device controlled by the tetracycline-inducible switch and measured its anti-cancer effects. Our data suggested PVT1 was an oncogene in bladder cancer and the tetracycline-inducible shRNA targeting PVT1 inhibited the expression of PVT1 in a dosage-dependent manner, and suppressed cell growth and induced apoptosis in bladder cancer cells. However, we should consider that this tetracycline-induced device is not absolutely efficient. Efficiency of the device may depend on the transfection efficiency. Optimizing the transfection system or packing this device as lentiviral vector may be a good choice to solve this problem.

In conclusion, PVT1 promotes progression of bladder cancer cells. Using the principles of synthetic biology, we use the synthetic platform to construct the device regulated by one of the synthetic parts, tetracycline-inducible switch, to control the expression of shRNA targeting oncogene PVT1. Our results indicate this device can quantitatively inhibit cell proliferation and induce cell apoptosis in bladder cancer cells.

Thirty-two patients diagnosed with bladder cancer were included in this study. Bladder cancer tissues and matched para-cancer tissues were resected and then snap-frozen in liquid nitrogen quickly. Written formal approval was also acquired from all the patients. This research was admitted by the Institutional Review Board of Shenzhen Second People’s Hospital.

T24 and 5637 cells were transiently transfected with specific siRNA oligonucleotides, PVT1 siRNA, according to a previous study [28]. We chose the sequence, ‘CAGCCATCATGATGGTACT’, for further study. Non-specific siRNA (si-NC) and si-PVT1 were purchased from GenePharma, Suzhou, China. Bladder cancer cells were seeded in six-well plates and get 30–50% confluence before transfection. Cells were transiently transfected with si-PVT1 (100 nM) and si-NC (100 nM) by using Lipofectamine 2000 Transfection Reagent (Invitrogen, Carlsbad, CA, USA) according to the manufacturer’s protocol. Plasmid Midiprep kits (Promega, Madison, USA) were used to get the plasmid vectors (PVT1 shRNA, NC shRNA) for transfection.

The TRIzol reagent (Invitrogen, Grand Island, NY, USA) were used to extract total RNA from tissues or cells after transfection according to the manufacturer’s instructions. Total RNA was transformed to cDNA by utilizing PrimeScript RT Reagent Kit with gDNA Eraser (Takara, Dalian, China). The primer sequences were shown: PVT1 primers [22] forward:5′-GCCCCTTCTATGGGAATCACTA-3′, reverse: 5′-GGGGCAGAGATGAAATCGTAAT-3′; GAPDH primers forward: 5′-CGCTCTCTGCTCCTCCTGTTC-3′, reverse: 5′–ATCCGTTGACTCCGACCT TCAC-3′. A standard SYBR Green PCR kit (Takara, Dalian, China) was used for quantitative PCR (qPCR) and qPCR was executed in a final reaction volume of 20 μl according to the manufacturer’s instructions. GAPDH was used as the internal control and the data were normalized to the expression of GAPDH. The reactions were carried out on an ABI PRISM 7500 Fluorescent Quantitative PCR System (Applied Biosystems, Foster City, CA, USA) in triplicate. The results were analyzed by calculating the relative amount of PVT1 using the comparative ΔCt method. All experiments were carried out at least three repetitions.

Cell proliferation was monitored using Cell Counting Kit-8, CCK-8 (Beyotime Institute of Biotechnology, Shanghai, China) and 5-ethynyl-20-deoxyuridine (EdU) assay kit (Ribobio, Guangzhou, China), respectively, according to the manufacturer’s instructions. For CCK-8 assay, 5 × 103 cells per well were seeded in a 96-well plate for 24 hours, then transiently transfected with siRNAs or plasmids. CCK-8 assay was performed according to the previous study [29]. EdU incorporation assay was carried out according to previous studies [30, 31]. All experiments were performed in triplicate.

T24 and 5637 baldder cancer cells were transiently transfected with siRNA or plasmid in 12-well plates. After 48 hours, the activity of caspase 3 was detected by the caspase 3 enzyme-linked immunosorbent assay (ELISA) assay kit (Hcusabio, Wuhan, China) according to the manufacturer’s protocol. All experiments were performed at least three times.

Two days after transfection, the Hoechst 33258 staining kit (Life, Eugene, OR, USA) was utilized to observe the apoptotic cells induced by si-PVT1 or PVT1 shRNA plasmid [32]. Each assay was carried out at least three times.

Bladder cancer T24 and 5637 cells were transiently transfected with siRNAs or plasmid vectors. 48 hours after transfection, cells were harvested and then collected. The FITC Annexin V Apoptosis Detection Kit (TransGen, Perking, China) was utilized to double stain cells with FITC-Annexin V and PI according to the manufacturer’s instructions. Flow cytometry (EPICS, XL-4, Beckman, CA, USA) was utilized to observe cell apoptosis. In the graphs, cells were discriminated into dead cells, living cells, early apoptotic cells and late apoptotic cells. The ratio of early apoptotic cells was regarded as an observation index to compare the experimental group and negative group. Each experiment was done at least three times.

All data were presented as mean ± standard deviation (SD). All statistical analyses were executed by using SPSS 20.0 software (IBM, Chicago, IL, USA). Paired samples’ t test was used to analyze the PVT1 expression difference between bladder cancer tissues and para-cancer tissues. CCK-8assay data were analyzed by ANOVA and independent samples’ t test was utilized to analyze other data. A two-sided value of P < 0.05 was considered to be statistically significant.