Breast cancer is the most common malignant neoplasm among women in the world. It is believed to result from a complex interplay of genetic and non-genetic risk factors. Linkage and family-based studies have shown that germline mutations of high- and moderate-penetrance genes such as BRCA1/2, PTEN, ATM, CHEK2, TP53, PALB2, and BRIP1 account for 20%–25% of the genetic component of breast cancer [1]. Genetic association studies, such as genome-wide association studies (GWASs), have identified low-penetrance common variants (predominantly single nucleotide polymorphisms [SNPs]) associated with breast cancer risk. Since the first 3 GWASs that identified SNPs associated with breast cancer susceptibility were conducted in early 2007 [2–4], over 80 loci associated with increased breast cancer risk have been found [5–16]. These studies have suggested that high- and moderate-penetrance genes and GWAS-identified low-penetrance common variants together may explain about 50% of the familial risk of breast cancer [17].

Accumulating evidence has shown that certain genetic variations are associated with response to chemotherapy in patients with lung cancer [18, 19]. However, genetic variants associated with tumor response to specific chemotherapy regimens in breast cancer have rarely been studied [20–22]. Neoadjuvant chemotherapy is increasingly used for operable primary breast cancer because it yields survival rate at least equal to those of adjuvant chemotherapy [23–25]. Some of the most effective cytotoxic agents against breast cancer are the anthracyclines, which have formed the backbone of most adjuvant and neoadjuvant regimens for more than 2 decades [23, 26–29]. Another class of effective cytotoxic agents, taxanes (such as paclitaxel and docetaxel), are also used as standard therapy for breast cancer, as monochemotherapy, in combination therapy, or in sequential therapy [30–32]. As neoadjuvant therapy, taxanes have produced dramatic increases in response rates [33–35]. Still, only a minority of patients achieve pathologic complete response (pCR) after receiving either anthracycline- or taxane-based neoadjuvant regimens. Given the lack of a preferred neoadjuvant treatment regimen, identifying which patients are most likely to respond to a specific regimen could significantly improve breast cancer treatment outcomes and facilitate the development of targeted therapies. Since GWASs have been successful in identifying low-penetrance common variants for breast cancer predisposition, several studies have investigated the potential roles of GWAS-identified SNPs in the choice of neoadjuvant therapy and evaluation of patient prognosis [18, 19]. In the current GWAS, we aimed to identify associations between SNPs associated with breast cancer susceptibility and response to anthracycline- and taxane-based neoadjuvant chemotherapy in patients with breast cancer.

The demographic and clinicopathologic characteristics of the 960 breast cancer patients who received neoadjuvant chemotherapy and were included in the discovery or validation cohort are shown in Table 1. In the discovery stage, the pCR rate was 32.6%. In the validation stage, the pCR rate was 15.5% in patients who received anthracycline-based neoadjuvant therapy and 17.1% in those who received a taxane-based regimen.

The discovery cohort included 92 patients who each received 4 cycles of the anthracycline-based CTF neoadjuvant regimen. pCR was used to differentiate cases from controls. All individuals had < 10% of missing genotypes, and all were genotyped as females based on X-chromosome genotypes, and therefore all were included. GWAS was performed using PLINK on genotype data from 30 patients with pCR and 62 patients with non-pCR. Of 389,795 SNPs included in the analysis, 351 SNPs showed significant associations with pCR. We then employed 3 additional criteria to select SNPs for inclusion in the validation stage. First, the 351 SNPs that showed significant association with pCR were confirmed using a genome-wide significance at P < 1e-03 (Figure 1). Second, the data set was narrowed down to 32 SNPs that are known to be related to genes that correlate with cancer using a search of gene annotation databases and published literature (ORs ranging from 2.89 [95% CI, 1.53–5.48] to 6.14 [95% CI, 2.07–18.20]) (Table 2). Third, using unadjusted univariate Cox proportional hazard models (P < 0.05), we ended up with only 2 SNPs with a pCR rate that was significantly higher for both homozygotes (Table 3).

The two SNPs examined in the validation phase were marked by bold.

Table 3: SNPs for which homozygosity was significantly associated with pCR in the discovery cohort

Association of rs1799937genotype and response to anthracycline-based regimens

*A P value of < 0.05 was considered statistically significant.aAA vs GG; bAG vs GG; cCC vs TT; dCT vs TT.

Association between rs1799937genotype and response to taxane-based regimens

Further, we explored the association of rs1799937 with pCR in patients receiving taxane-based neoadjuvant chemotherapy. Rs1799937 genotypes were assessed by sequencing in an independent cohort of 467 patients who received taxane-based regimens. No association was observed between rs1799937 genotype and pCR status; the two homozygous genotypes showed similar pCR rates (17.1% vs 19.5%; P = 0.34, Table 5).

*A P value of < 0.05 was considered statistically significant.aAA vs GG; bGA vs GG.

Association between rs1799937genotype and survival 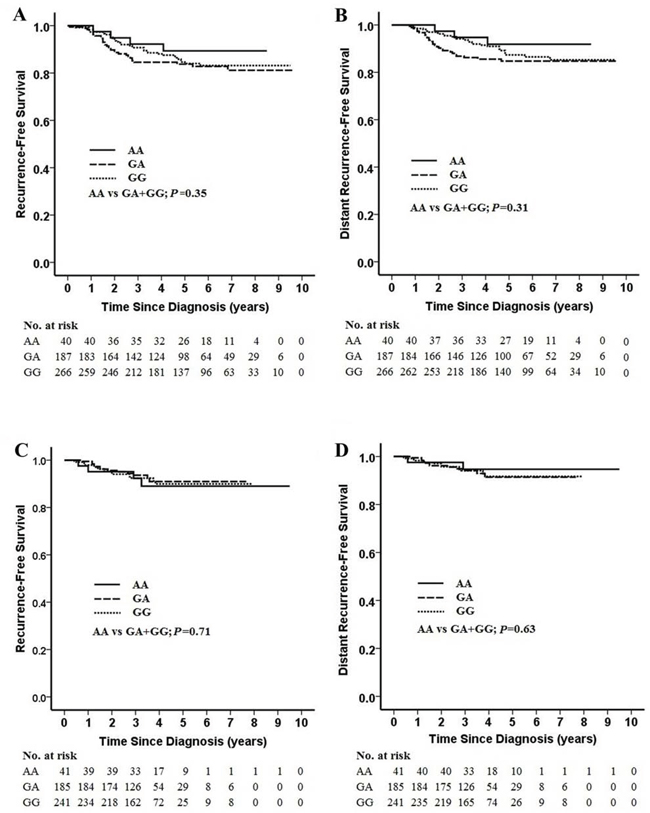 The rs1799937 A > G SNP is located in an intron region of the WT1 gene at 11p13. WT1 encodes a transcription factor that contains 4 zinc-finger motifs at the C-terminus and plays an important role in organ development and cell survival [36]. In addition to regulating nuclear transcription, WT1 is also involved in RNA splicing and metabolism [37, 38]. WT1 was first identified as a tumor suppressor gene in Wilms’ tumor. However, accumulating evidence has shown that overexpression of WT1 exerts an oncogenic effect in other tumors [36, 39, 40] and is linked to poor prognoses in leukemia and breast cancer [41, 42].

Previous studies have also shown that WT1 gene expresion is related to sensitivity to chemotherapy. Perugorria et al. have reported that WT1 knockdown markedly sensitized hepatocellular carcinoma cell lines to doxorubicin-induced apoptosis [43]. Interestingly, the effect of WT1 expression on apoptosis of hepatocellular carcinoma cells seems to be specific to doxorubicin, and not to other chemotherapeutic agents. Doxorubicin, an anthracycline, is a potent inhibitor of Top2 isozymes and exerts its genotoxic effect by impeding DNA duplication [44–36]. We speculate that rs1799937 may function by altering WT1 gene expression, thus rendering cancer cells in patients with the AA allele more sensitive to anthracycline-based chemotherapy.

In summary, our results indicate that anthracycline-based neoadjuvant chemotherapy may benefit breast cancer patients with the rs1799937 AA allele more than those with the GG allele. Therefore, further investigation of WT1 as a potential target of chemotherapy for breast cancer is warranted.

The discovery stage included 92 patients from a pool of 493 patients who had received 4 cycles of an anthracycline-based neoadjuvant regimen consisting of cyclophosphamide, pirarubicin (THPADM), 5-fluorouracil (CTF). This regimen included pirarubicin 35 mg/m2 i.v. on day 1 and day 8, cyclophosphamide 500 mg/m2 i.v. on day 1 and day 8, and 5-fluorouracil 200 mg/m2/day i.v. continuous infusion for 28 days, every 4 weeks. All the 92 patients received an identical CTF regimen with the same dosage and same number of cycles. There was no bias in terms of any patient characteristics. Using pCR, defined as the absence of invasive breast tumor cells in the breast and axillary lymph nodes after completion of neoadjuvant chemotherapy, the patients were divided into 2 pathologic response groups with 30 in the pCR group and 62 in the non-pCR group. In the validation stage, 401 patients who had received 2–6 cycles of CTF and 467 patients who had received a taxane-based regimen using paclitaxel were included.

In the discovery stage, we isolated DNA from peripheral blood lymphocytes using phenol-chloroform extraction and ultrapurification. Genotyping was conducted using Affymetrix Genome-Wide Human SNP Array 6.0 chips (Santa Clara, CA). We performed systematic quality control on the raw genotyping data to filter out unqualified samples and SNPs. As quality control, we excluded DNA samples that failed to be genotyped as female based on X-chromosome genotypes. SNPs were excluded if (1) they were not mapped on autosomal chromosomes; (2) they had a call rate < 95%; (3) they had minor allele frequency < 0.01; (4) they deviated from the Hardy-Weinberg equilibrium at P < 1e-05; or (5) their genotyping clusters had poor resolution. These led to a total of 389,795 SNPs to be analyzed using a GWAS toolset PLINK [47].

The genotypes of the patients with and without pCR were compared. We selected SNPs that were (1) associated with pCR in the discovery stage at P < 1e-03; (2) located in genes that have been correlated with cancer in gene annotation databases and published literature; and (3) associated with pCR status in the discovery stage at P < 0.05 using unadjusted univariate Cox proportional hazard models. Finally, 2 SNPs, rs1799937 and rs6044100, were identified.

For the validation phase, genomic DNA samples were extracted from peripheral blood lymphocytes of an additional 868 patients, including 401 who received anthracyclin-based regimens and 467 who received taxane-based regimens. Genotyping of the samples was conducted using a polymerase chain reaction/sequencing assay (ABI 3730 system, Applied Biosystems, Foster City, CA).

Association between SNPs and response to neoadjuvant chemotherapy in patients with breast cancer was assessed using logistic regression models and reported as odds ratios (ORs) and 95% confidence intervals (CIs). ORs were estimated for heterozygotes and homozygotes for the variant allele compared with homozygotes for the common allele. A logistic regression model was applied to determine whether a factor was an independent predictor of pCR in a multivariate analysis. Survival analysis was performed using the Kaplan-Meier curves. All statistical tests were two-sided. All statistical analyses were performed using SPSS 16.0 software (SPSS Inc., Chicago, IL).

33. Goble S, Bear HD. Emerging role of taxanes in adjuvant and neoadjuvant therapy for breast cancer: the potential and the questions. Surg Clin North Am. 2003; 83:943–971.

44. Gewirtz DA. A critical evaluation of the mechanisms of action proposed for the antitumor effects of the anthracycline antibiotics adriamycin and daunorubicin. Biochem Pharmacol. 1999; 57:727–741.