Surgical excision is essential for management of the rare and aggressive neoplasm adrenal cortical carcinoma (ACC). Five-year overall survival (OS) after surgery for ACC is dependent on disease stage, but for all stages the risk of death declines with time after surgery. We calculated the effect of post-surgical duration on conditional survival (CS) among ACC patients. A total of 641 patients with M0 ACC were selected from the Surveillance, Epidemiology, and End Results (SEER) registry (1988–2012). OS for the entire cohort at 1, 2, 3, 4, 5 and 6 years was 81.4%, 66.8%, 56.3%, 50.3%, 47.2% and 44.3%, respectively. CS for an additional year given prior survival for 0, 1, 2, 3, 4 or 5 years was 81.4%, 81.1%, 83.0%, 87.5%, 93.4% and 93.4%, respectively. Age, tumor stage, tumor grade and marital status affected OS and CS. Increases in 1-year CS over time were more pronounced in patients with poorer prognostic factors. With longer follow-up, tumor stage- and grade-dependent differences in CS decreased or even disappeared. CS may provide more meaningful life expectancy predictions for survivors of ACC than conventional survival analysis.

Adrenal cortical carcinoma (ACC) is a rare and aggressive neoplasm with a reported annual incidence of 0.7–2.0 cases per million [1, 2]. Most patients diagnosed with ACC present with advanced disease. For those with local or locally advanced disease, radical resection of the primary tumor is the only curative option [3–5]. Following curative resection, overall survival remains low, but the risk of dying of ACC is not constant over time, as most deaths occur within the first 2 years after the surgery. Consequently, prognosis (e.g., 5-year survival probability from the day of surgery) improves conditionally depending on the length of time beyond a critical preliminary period the patient has survived. This improvement in prognosis over time can be explained as a conditional probability of survival.

To our knowledge, there are no published studies examining conditional survival (CS) among patients with ACC. The rarity of ACC makes both prospective and retrospective single-institution or multi-institution studies difficult. The Surveillance, Epidemiology, and End Results (SEER) registry, though imperfect, is a valuable source of data on rare tumors, including ACC. For this study, we used recent data from the SEER registry on patients who had undergone surgery for ACC to calculate the conditional probability of survival. This enabled us to evaluate the utility of surgery for ACC from a new perspective.

The clinical stage classifications of ACC are shown in Table 1. In all, 641 patients with nonmetastatic ACC diagnosed between 1988 and 2012 were identified in the SEER database. All of these patients had undergone surgery to remove an adrenal tumor. Their relevant sociological, clinical and pathological characteristics are summarized in Table 2. The median age at diagnosis was 53 (18–89) years, and there were more women (63%, n = 402) than men (37%, n = 239). According to the tumor-staging classification suggested by the European Network for the Study of Adrenal Tumours (ENSAT), most patients had stage II disease (47%), followed by stage III (33%) and stage I (5%). The ENSAT stages were unknown in 15% of patients. Those with unknown stages were diagnosed earlier (median year of diagnosis 1998; P < 0.001) than those classified as stage I/II or III (median years 2005, and 2006, respectively). Differences in age, sex, tumor size, race, laterality and marital status were not statistically significant among the stage groups. Patients with higher stage disease tended to have higher grade tumors, a greater rate of lymph node resection and radiation therapy, and were more likely to experience a cancer-specific death.

Table 2: Relevant sociological, clinical and pathological characteristics of the entire cohort and patients segregated based on disease stage

Table 4: Conditional survival for an additional year among patients segregated based on prognostic factors

*The value at year N from diagnosis was the CS for an additional year at year N-1.

CS estimates are more encouraging than static survival probabilities (Figure 1). Patients who had survived >24 months after their initial diagnosis had a better 1-year CS than those who had survived <24 months since diagnosis. Age, tumor stage, marital status and tumor grade also significantly affected CS. The gains in 1-year CS over time were more pronounced in older patients (>53 years), those with an unhappy marital status (divorced, separated or widowed), or stage III or high-grade disease. These differences in CS between different stage and grade groups decreased with time from diagnosis, or even disappeared. 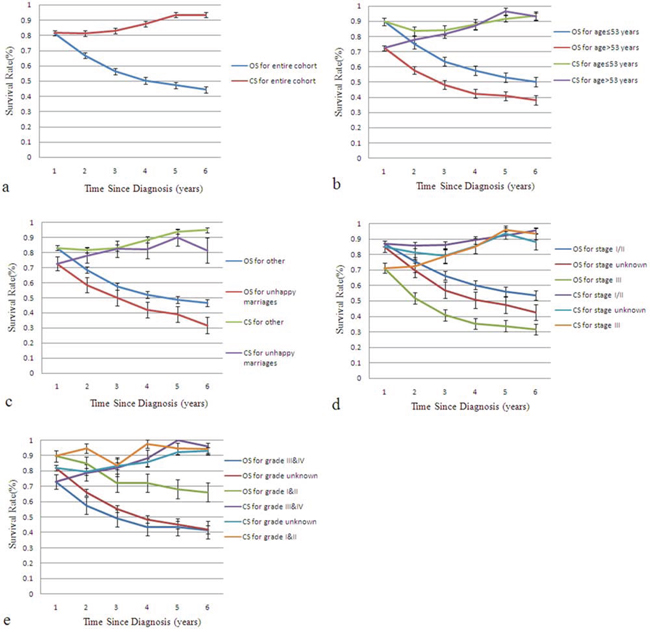 ACC is a rare malignancy that originates in the adrenal cortex and has a bimodal age distribution, with peaks in childhood and in the fourth to fifth decade of life [3]. Because ACC in children is more likely to be part of a rare hereditary syndrome [3], patients less than 18 years of age were excluded from our analysis to ensure we were focusing on the sporadic tumors that comprise most ACCs.

Surgery is the single most important intervention in the treatment of nonmetastatic ACC [5]. And even after recurrence or metastasis, surgery with the aim of tumor removal may be regarded as a potential treatment option [6, 7]. Icard et al. reported stage I, II and III 5-year survival rates after surgery to be 66%, 58% and 24%, respectively [8]. Ohwada et al. reported 5-year post-surgical survival rates of 20% and 40% for stages III and IV, respectively [9]. Using data from the SEER registry, Tran et al. found that the absence of cancer-directed surgery is a negative predictor of survival (hazard ratio, 3.341; confidence interval, 1.168–9.557) [10]. In the present study, we found that 5-year survival rates after surgery, and especially CS, justifies radical surgical resection in ACC patients, even those with advanced disease.

To our knowledge, this is the first study to address CS among patients with malignant ACC. Moreover, with 641 patients in the SEER registry (1988–2012), this is one of the largest studies of patients who have undergone surgery for non-metastatic malignant ACC. Compared to actual survival rates, CS probabilities appear to better reflect future survival of patients who have already survived for a given period of time.

Gains in 1-year CS over time are more pronounced in patients with poor risk factors than in those with favorable risk factors. For example, patients with advanced or poorly differentiated tumors have more pronounced gains than those with early-stage or well differentiated tumors. Kato et al. reported that the increase in median CS from 1 to 5 years after diagnosis is much slower in patients with prostate cancer (1.4-fold) than with lung cancer (13.0-fold) [11], reflecting the greater malignancy of lung cancer. Similarly, CS improved more in patients with colon [12, 13], ovarian [14] or rectal cancers [15] given poorer initial prognoses than in those with better prognoses. In the present study, CS improved over the first 5 years after diagnosis across all stages. For ENSAT stage III cancers, it improved from 72% at 1 year to 93% at 5 years, while for stage I/II cancers it steadily improved from 85% to 95% over the first 5 years. For most tumor types, CS at diagnosis is reportedly better in younger than older patients [16], and an unhappy marital status is associated with a higher risk of poor health [17]. CS thus improved more in older patients (>53 years) and those with unhappy marital status.

Although disease stage remains an important prognostic factor, earlier studies showed that between-stage differences in CS at diagnosis decrease with time from diagnosis, or even disappear [18, 19]. We found that for ACC between-stage differences in CS disappeared as follow-up became longer, and we observed a similar pattern for tumor grades. Although the effect of marital status on CS among ACC patients was not significant during the first 2 years after diagnosis, it became significant later during follow-up. The impact of age on CS was more complex. One year after diagnosis, older patients (>53 years) had worse 1-year CS, but this difference disappeared between the 2nd and 4th years after diagnosis. It then reappeared after 5 years, when older age became associated with a positive prognosis (see Table 4).

SEER data provide strong clinical insight into survival among patients in the U.S. with rare malignancies, including ACC. Although the overall quality of the SEER registry is impressive, it has several limitations [20]. The SEER registry does not always provide data concerning lymph node status. We treated the absence of data and negative lymph nodes as equivalent (negative). This is the main reason we did not assess the effect of lymphadenectomy, though it is an important prognostic factor in patients with ACC. Data concerning tumor markers, extent of surgery, completeness of resection and margin status were also unavailable. Although treatment with the adrenolytic drug mitotane or chemotherapy is important in advanced ACC cases and affects overall survival [21, 22], data concerning these drugs were not available in the SEER registry either. Finally, there is the unavoidable selection bias of all retrospective studies. Although these limitations may have played a role in the selection of available patients for this analysis, we remain confident that SEER audits medical records at participating institutions, enabling it to provide high quality data concerning ACC.

The SEER database was queried for patients over 18 years old diagnosed with ACC between 1988 and 2012. Based on the International Classification of Disease (ICD), patients with ACC were identified based on site (C74.0 or 74.9) and histologic subtype code (8370). Patients with distant metastases or other malignant tumors were excluded, as were those who had not undergone surgery for removal of their adrenal tumors.

The subjects' relevant sociological, clinical and pathologic characteristics were described using simple summary statistics. The χ2 test and analysis of variance were used to analyze categorical and continuous variables, respectively. The Kaplan-Meier method was used for univariate analysis of prognostic factors, and the log-rank test was used to calculate statistical significance. Multivariate analysis was performed using a Cox proportional hazard model and forward stepwise method to determine predictors of survival.

Actual survival curves were generated using the Kaplan-Meier method. CS was defined as the probability of surviving for an additional year on the condition that a patient had already survived for a designated length of time [25]. The mathematical definition of CS can be expressed as follows: Let S(t) be the traditional actuarial life-table survival at time t. Conditional survival, CS(y/x), is the probability of surviving an additional y years, given that the patient has already survived x years. CS can then be expressed as: CS(y/x) = S(x+y)/S(x). For example, to compute the 1-year CS for patients who have survived 1 year, the 2-year survival is divided by the 1-year survival.