Distribution of metastatic disease in the brain in relation to the hippocampus: a retrospective single-center analysis of 6064 metastases in 632 patients

This study aimed to investigate the patterns of brain metastasis and to explore the risk factors affecting hippocampus metastasis (HM). We retrospectively analyzed the clinical information of patients with metastatic disease in the brain. The associations between clinicopathologic variables with HM and peri-hippocampal metastasis (PHM) were evaluated in univariate and multivariate regression analyses. A total of 632 patients with 6064 metastatic lesions were recruited into the present study. Of these, 4.1% (26/632) of patients developed HM, and 5.5% (35/632) of patients developed PHM. Only 0.5% (31/6064) of metastatic lesions were located in the hippocampus and 0.6% (37/6064) were in the PHM. Age ≤60 years was an independent risk factor for HM (odds ratio [OR]: 2.602, 95% confidence interval [CI]: 1.115–6.076, P = 0.027) and PHM (OR: 2.555, 95%CI: 1.229–5.310, P = 0.012) in univariate and multivariate analyses. The hippocampus is a rare site of brain metastasis. Younger patients (age ≤60 years) had increased risk of developing HM and PHM. The current study provides the opportunity to investigate the clinical feasibility of hippocampal sparing whole brain radiation therapy, especially in older patients.

Approximately 10% to 80% of patients with malignancies may develop brain metastases from different primary tumor sites [1–4], and there are associated with a dismal prognosis. Whole brain radiotherapy may attenuate the symptoms of brain metastasis and prolong survival time [5]. Moreover, for patients with non-small cell lung cancer (NSCLC) or small cell lung cancer (SCLC), survival can be improved by prophylactic cranial irradiation (PCI) [6, 7]. However, whole brain radiotherapy may cause neurocognitive decline and significantly affect the quality of life (QOL) [8]. Radiation-induced damage to the hippocampus plays a considerable role in the neurocognitive decline of patients after whole brain radiotherapy [9].

The hippocampus, which is a neural structure located in the medial temporal lobe of the brain, has highly sensitive to radiation [10]. Studies have shown that the incidence of hippocampal metastasis (HM) is rarely compared to other sites [11–14], and these results support the hypothesis that hippocampal radiotherapy should be avoided. The Radiation Therapy Oncology Group (RTOG) 0933 trial found that hippocampal sparing whole brain radiation therapy (HS-WBRT) could lessen the effect of radiation on memory [15]. However, not all patients are suitable for HS-WBRT. Currently, an accurate tool to predict hippocampal metastasis is lacked. In this study, we analyzed the distribution of metastatic disease in the brain in patients with malignancies and further explored the factors influencing metastasis to the hippocampus. 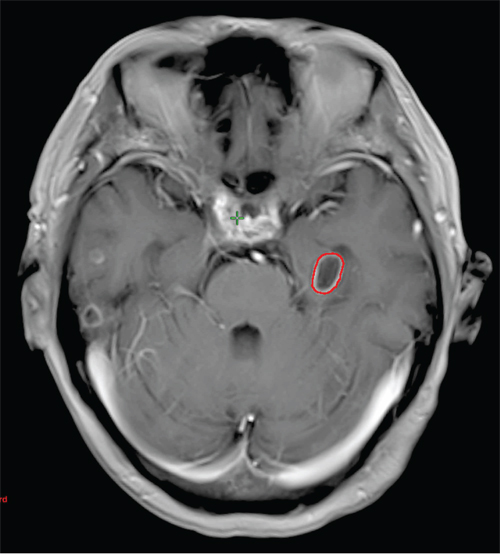 *Exclusion of metastases involved in hippocampus

In the present study, we retrospectively analyzed 632 patients with 6064 metastases resulting from extracranial malignancies. Our results showed that the incidence of HM and PHM was rarely (4.1% and 5.5%, respectively), and the risk for HM (OR: 2.602) and PHM (OR: 2.555) increased significantly in patients with age ≤60 years.

With advances in imaging and more effective systemic treatments improving survival of cancer patients, the probability of brain metastases maybe potentially increase. PCI may benefit patients with NSCLC or SCLC [6, 7]. However, it is imperative to balance therapeutic efficacy with the risk of radiotherapy-induced damage to the brain. Studies have confirmed that hippocampal radiotherapy may cause neurocognitive decline [8, 9]. In patients receiving brain radiotherapy, the dose of radiation to the hippocampus and temporal lobe may significantly influence cognitive function of patients [19]. The RTOG 0933 trial employed intensity-modulated radiation therapy (IMRT) for HS-WBRT, and the results showed that this technique could significantly improve memory and QOL [15].

In the RTOG 0933 trial, 4.5% of patients developed HM after HS-WBRT [15], while in a study by Oehlke et al., HM recurred in 10% of patients after HS-WBRT [17]. Although there is a potential risk of HM or PHM after HS-WBRT, it is important to develop tools to accurately predict HM or PHM. In a study of SCLC, Kundapur et al. found that the number of metastatic lesions was potentially related to HM (OR: 1.4, 95% CI: 0.9–2.2, P = 0.09) [18]. In the study by Oehlke et al., 10% (2/20) of patients developed new HM after HS-WBRT, and new HM occurred concomitantly with multiple other new lesions and not as isolated relapses. However, these lesions were not described in detail [17].

In this study, we found that advancing age was an independent risk factor of HM and PHM. The relationship between HM or PHM and age is unclear. However, studies have found that older age is a poor prognostic factor for survival in patients with metastatic disease in the brain [23–26]. The survival of younger patients with metastatic disease in the brain have a longer life expectancy, and the probability of progression of brain metastases may potentially increase, thereby increasing the probability of HM and PHM. In this study, we found patients with HM are often accompanied by the multiple brain metastases. However, due to the limitations of retrospective studies, we are unable to accurately obtain the time of brain metastases and HM.

Currently, the correlation between specific primary tumor site (including SCLC, NSCLS and melanoma, etc.) and the HM remains unclear [12, 18, 20, 21]. In our study, the risk for HM and PHM in patients with breast cancer was greater than that of patients with other types of cancers, but with no statistical significance. Given that the incidence of HM is very low, it is very difficult to use the type of cancer as to guide to determine whether this procedure is necessary.

There were several limitations to the present study. First, this is a retrospective review from single institution. However, to the best of our knowledge, this study had the largest sample size and our results are similar to other studies. Second, our results are absent the data of HM and PHM after whole brain radiotherapy.

In conclusion, the hippocampus is a rare site of brain metastasis. Patients with younger age had increased risk of developing HM and PHM. The current study provides the opportunity to investigate the clinical feasibility of HS-WBRT, especially in older patients

Patients were retrospectively reviewed from the First Hospital of Xiamen University between January 2008 and March 2015. These patients were pathologically diagnosed with extracranial malignancies and had brain metastases at initial diagnosis or follow up. The results of magnetic resonance imaging (MRI) including T1-weighted, postcontrast, and axial MRI images were available for all patients. The study protocol was approved by the ethics committee of the First Affiliated Hospital of Xiamen University.

Delineation of the hippocampus

Age, sex and primary site of malignancy were employed as the risk factors of HM and PHM.

All data were analyzed by using the SPSS statistical software package (version 16.0; IBM Corporation, Armonk, NY, USA). The χ2 test and the Fisher’s exact probability test was used for categorical variables and analysis of variance for continuous variables to compare the distribution of demographic data among patients with and without HM and PHM. The relationship between patients’ characteristics of HM and PHM were examined by univariate and multivariate logistic regression analysis. A P-value < 0.05 was considered significant in all analyses.