Background: Patients with stage II nasopharyngeal carcinoma were reported to benefit from adding cisplatin-based concurrent chemotherapy to two-dimensional conventional radiotherapy. But this benefit becomes uncertain in the intensity-modulated radiotherapy (IMRT) era, owing to its significant advantage.

Conclusions: In this study, low risk nasopharyngeal carcinoma patients who underwent IMRT could not benefit from cisplatin-based concurrent chemotherapy.

Nasopharyngeal carcinoma (NPC) is a malignancy relatively rare in Europe and the United States [1] but highly endemic in Southern China [2] and Hong Kong [3]. Radiotherapy is the mainly standard treatment. A recent phase III randomized trial showed considerable survival benefit from the combined treatment of cisplatin-based concurrent chemotherapy and two-dimensional conventional radiotherapy (2DCRT) for patients with stage II (the Chinese 1992 staging system) of this disease [4]. However, since intensity-modulated radiotherapy (IMRT) was known to be superior to 2DCRT in local control [5], it is a pivotal question whether patients in low risk of relapse, distant metastasis or death [e.g. T1N1M0, T2N0-1M0 or T3N0M0, based on the 2010 International Union against Cancer/American Joint Committee on Cancer (UICC/AJCC) staging system] can still obtain significant benefit from the additional concurrent chemotherapy in the IMRT era. Unfortunately, there is no convincing evidence from any large scale completed randomized controlled trial, due to the low incidence of NPC in most area, the small proportion of patients with early stage, and the recent application of IMRT in the endemic area. To address this question, we retrospectively analyzed data of 661 patients with stage T1N1M0, T2N0-1M0 or T3N0M0 who received IMRT with or without concurrent chemotherapy. We especially compared the survival outcomes of IMRT alone with IMRT plus cisplatin-based concurrent chemotherapy in a propensity score matched cohort, which was likely to mimic randomized trials [6]. This shall provide valuable support for treatment guidelines and suggestion for the future randomized controlled trials.

Table 1: Baseline characteristics of nasopharyngeal carcinoma patients treated with intensity-modulated radiotherapy with or without concurrent chemotherapy 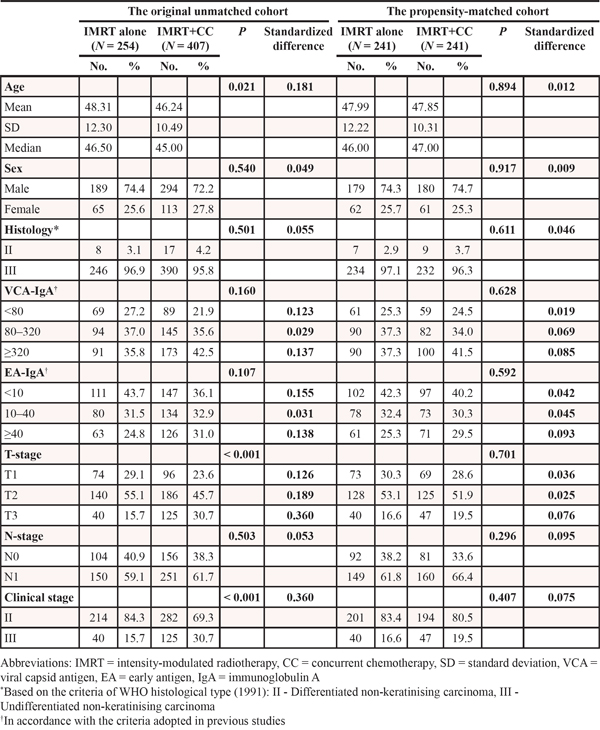 ‡Adjusted for the same covariates with a robust variance estimator to account for the clustering within matched pair.

Table 3: Subgroup analysis by prognostic factors in multivariate analysis in the propensity-matched cohort *

The most appealing finding of this large scale propensity score matched study is that the addition of cisplatin-based concurrent chemotherapy to IMRT did not lower the risk of death, locoregional relapse or distant metastasis in stage T1N1M0, T2N0-1M0 and T3N0M0 NPC.

So it was not absurd regarding the insignificant survival differences between IMRT alone and IMRT plus concurrent chemotherapy for low risk NPC in our study. Certainly, the average dose of cisplatin delivered in concurrent chemotherapy was lower than 200 mg/m2. Thus further prospective studies are warranted to confirm whether this should be responsible for the observed insignificant effect, as retrospective studies suggested that cumulative dose of cisplatin over 200 mg/m2 resulted in better OS in stage IIb and III (the 2002 UICC/AJCC staging system) patients who received 2DCRT or IMRT [18]. Possibly, concurrent chemotherapy with other more efficacious regimen might improve the survival. For instance, the induction regimen of taxanes (docetaxel or paclitaxel) plus cisplatin and fluorouracil (PF) was superior to PF alone in head and neck cancer [19–22] and neoadjuvant docetaxel and cisplatin significantly improved OS of advanced NPC when comparing to chemoradiotherapy alone [23]. Thus taxanes-based concurrent chemotherapy might be a potentially effective alternative [24, 25]. Additionally, concurrent chemotherapy with small molecular targeted drugs such as endostar (e.g., NCT02237924), nimotuzumab (e.g., NCT01074021) and bevacizumab [26] deserved further investigation in early stage patients. Despite the fact that these patients staged with T1N1M0, T2N0-1M0 or T3N0M0 usually have low risk of relapse and distant metastasis on the whole, selecting patients using molecular biomarkers [e.g., deoxyribonucleic acid (DNA) copy number of the Epstein-Barr virus] might be a valid approach to better survival.

Obviously, the treatment outcomes from the current study were higher than those from RTOG 0225 [27] and MSKCC [28] studies, but comparable to those from the similar early stage NPC study by Su et al [17]. The differences in tumor stage most possibly resulted in the big gap of survival between these studies. Specifically, 58.9% and 77% of patients included in RTOG 0225 and MSKCC studies were staged III and IV, respectively. These locoregionally advanced disease undoubtedly had low survival rate. Inversely, stage II patients had a 5-year OS rate of 85.8% and 5-year PFS rate of 77.8% when receiving 2DCRT without chemotherapy [4], and even achieved a 5-year disease specific survival rate of 97.3% from IMRT alone [17]. Secondly, only 33.8% of patients in RTOG 0225 (32% in MSKCC study) were Asian, and over 40% (35% in MSKCC study) of patients were diagnosed with WHO I/II histology. The differences in ethnicity and histology may also contribute to the survival disparities. For example, the 3-year OS rate was 90% in a report from Hong Kong [29], which was much higher than the 2-year OS rate of 80.2% in RTOG 0225. Finally, the small number of patients in RTOG 0225 and MSKCC study possibly caused the skewed results as well.

The major strength of this study lies in the investigation of concurrent chemotherapy effect in low risk NPC in the IMRT era with the largest sample size using propensity score matching and multivariate analysis. This greatly addressed the limitations of divergent confounders and selection bias associated with the retrospective assessment of observational data [30]. Of course, the unobserved differences between the two arms cannot be balanced or adjusted. Although the presented data was derived from a single institution in endemic area with expertise in diagnosing and treating this disease, it did provide the most convincing evidence before the final report of any phase 3 randomized controlled trial. Since data on DNA copy number of the Epstein-Barr virus was missing in most of cases, VCA-IgA and EA-IgA were taken as the surrogate.

The major limitation is the missing data on acute non-hematological and late toxicities because of the retrospective design and the long time span between the first and the last included case. The recorded hematological toxicities might also be inaccurate due to the absence of strict and regular detection during treatment. But the additional toxicity from concurrent chemotherapy and similar toxicity from IMRT in the two arms were expected. Owing to the low sensitivity rate of chest radiography compared with chest computed tomography (CT), some patients might be delayed in detecting lung metastasis and have falsely high DMFS rate as a consequence. But the intrinsic differences in DMFS might scarcely change, as the chance of delay was equal to patients in both arms. Another limitation caused by the retrospective design was the heterogeneity of chemotherapy regimens and doses, albeit we restricted to patients with cisplatin-based concurrent chemotherapy in the propensity-matched cohort. Yet this phenomenon was the exact representation of the clinical reality out of randomized controlled trials. Additionally, it was possible that patients in the IMRT alone arm had smaller tumor volume, for the absence of matching this characteristic because of the unavailable data in many cases. But importantly, prior study [31] indicated that the pretreatment tumor volume had limited prognostic value in early stage NPC compared with the usual T-stage and N-stage. Even though great tumor volume showed association with greater risk of local failure, this might be possibly compromised by the improved local control from IMRT [5]. Further prospective studies are warranted.

Between March 2003 and February 2013, 661 biopsy-proven, non-metastatic and treatment-naïve NPC patients who were at the age of 20 or above were entered into this study. All patients had complete pretreatment evaluation including patient history, physical examination, hematology and biochemistry profiles, fiberoptic nasopharyngoscopy with biopsy, magnetic resonance imaging (MRI) of the nasopharynx and neck, chest radiography or CT, abdominal sonography or CT, and Technetium-99m-methylene diphosphonate (Tc-99-MDP) whole-body bone scan or CT/MRI of bones. All the 661 patients were restaged with T1N1M0, T2N0-1M0 or T3N0M0 in accordance with the 2010 UICC/AJCC staging system for NPC.

All patients were treated by definitive IMRT with or without concurrent chemotherapy. The cumulative radiation doses were 66 Gy or greater to the primary tumor, 60–66 Gy to the involved cervical lymph nodes and 50 Gy or greater to potential sites of local infiltration and bilateral cervical lymphatics in 30–33 fractions. Further details of the radiation technique have been described previously [32]. Concurrent chemotherapy mainly consisted of 80–100 mg/m2 cisplatin- or nedaplatin-based regimen given every three weeks for two to three cycles, or 30–40 mg/m2 cisplatin- or nedaplatin-based regimen or 20–30 mg/m2 docetaxel-based regimen given weekly for up to seven cycles.

Patients were examined every 3–6 months during the first 3 years, and every 6–12 months thereafter until death. During this period, patients were assessed by history and physical examination and a series of conventional examination equipment (e.g., fiberoptic nasopharyngoscopy, MRI of the nasopharynx and neck, and distant metastastic work-up if indicated.) at each follow-up visit, to detect the possible relapse or distant metastasis. Local relapses were confirmed by biopsy, MRI scan, or both. Regional relapses were diagnosed by clinical examination and MRI scan of the neck and, in doubtful cases, by fine needle aspiration of the lymph nodes. Distant metastases were diagnosed by clinical symptoms, physical examinations, and imaging methods including chest radiography or CT, Tc-99-MDP whole-body bones scan or CT/MRI of bones, and abdominal sonography or CT. Patients without recent examination tests in the medical records were followed up by telephone call.

To reduce the interference of treatment heterogeneity, only 306 patients treated with IMRT plus cisplatin-based concurrent chemotherapy were selected to match those treated with IMRT alone using propensity score matching method. This method creates similar case (IMRT alone) and control (IMRT plus cisplatin-based concurrent chemotherapy) arms with balanced but not equal characteristics, and reduces possible biases to a minimum in a retrospective analysis [30]. Propensity scores were computed by logistic regression for each patient based on the following covariates, age, sex, histology (WHO II, differentiated non-keratinising carcinoma; WHO III, undifferentiated non-keratinising carcinoma [33]), titers of VCA-IgA and EA-IgA, T-stage, N-stage and clinical stage. Patients were then matched without replacement at the ratio of 1:1 on those scores, rather than the individual covariates. Covariates balance between the two sets were examined by t test (continuous variable), χ2 test (categorical variable) and standardized difference [34] for the original unmatched and propensity-matched cohorts.

OS (time from treatment to death from any cause), DMFS (time from treatment to the first distant metastasis) and LRFS (time from treatment to the first locoregional relapse) were estimated with the Kaplan–Meier method [35] and compared with log-rank test. Adjusted hazard ratios with 95% confidence intervals (with IMRT plus cisplatin-based concurrent chemotherapy as reference) were calculated using Cox proportional hazards model [36]. In the propensity-matched cohort, survival curves were compared using stratified log-rank test by matched pairs, and hazard ratios were estimated using Cox proportional hazards model with a robust variance estimator to account for the clustering within matched pairs [37]. Toxicities in both arms were compared with χ2 test and standardized difference [34].

We highly appreciate the anonymous editors and reviewers.

No external funding for this work.

This study was approved by the Institutional Review Board at Sun Yat-sen University Cancer Center, and individual informed consent was waived given the anonymous analysis of routine data. All clinical investigations have been conducted according to the principles expressed in the Declaration of Helsinki.

37. Austin PC. The use of propensity score methods with survival or time-to-event outcomes: reporting measures of effect similar to those used in randomized experiments. Stat Med. 2014; 33:1242–1258.