Recent reports suggested frequent occurrence of cancer associated somatic mutations within regulatory elements of the genome. Based on initial exome sequencing of 21 melanomas, we report frequent somatic mutations in skin cancers in a bidirectional promoter of diphthamide biosynthesis 3 (DPH3) and oxidoreductase NAD-binding domain containing 1 (OXNAD1) genes. The UV-signature mutations occurred at sites adjacent and within a binding motif for E-twenty six/ternary complex factors (Ets/TCF), at -8 and -9 bp from DPH3 transcription start site. Follow up screening of 586 different skin lesions showed that the DPH3 promoter mutations were present in melanocytic nevi (2/114; 2%), melanoma (30/304; 10%), basal cell carcinoma of skin (BCC; 57/137; 42%) and squamous cell carcinoma of skin (SCC; 12/31; 39%). Reporter assays carried out in one melanoma cell line for DPH3 and OXNAD1 orientations showed statistically significant increased promoter activity due to -8/-9CC > TT tandem mutations; although, no effect of the mutations on DPH3 and OXNAD1 transcription in tumors was observed. The results from this study show occurrence of frequent somatic non-coding mutations adjacent to a pre-existing binding site for Ets transcription factors within the directional promoter of DPH3 and OXNAD1 genes in three major skin cancers. The detected mutations displayed typical UV signature; however, the functionality of the mutations remains to be determined.

Emerging reports have identified frequent somatic mutations within regulatory sequences of the human genome [1-4]. Initially, the only regulatory mutations that are common in many cancers were reported in the core promoter of the telomerase reverse transcriptase (TERT) gene, which increase TERT transcription through creation of binding motifs for E-twenty six/ternary complex (Ets/TCF) transcription factors [1, 2, 5, 6]. Recent initiatives directed at genome wide search for non-coding regulatory mutations have uncovered alterations upstream of a number of genes [3, 4, 7]. In particular, the non-coding mutations in the succinate dehydrogenase complex, subunit D, integral membrane protein (SDHD) and diphthamide biosynthesis 3 (DPH3) promoters have been shown to affect Ets binding motifs and occurred in melanoma at frequencies of 4-10 and 13%, respectively [3, 4, 8]. The non-coding mutations add to the complexity of melanoma genome, which is characterized by one of the highest prevalence of somatic mutations [9-18].

In this report we show that typical ultraviolet (UV) signature mutations in the promoter region of DPH3 and oxidoreductase NAD-binding domain containing 1 (OXNAD1) genes (henceforth, called DPH3 promoter mutations), adjacent and within a preexisting Ets binding site, occur not only in melanoma but are common in basal cell (BCC) and squamous cell (SCC) carcinomas of skin. The mutations in the DPH3 promoter putatively abrogate the pre-existing binding motif for Ets transcription factors, whereas the mutations in TERT promoter result in de novo creation of those motifs.

Follow up sequencing of 304 melanomas showed that those mutations, lying within and adjacent to a preexisting Ets/TCF binding motif CCTTCCGG (CCGGAAGG on the reverse strand were present in 30 (10%) tumors (Table 1; Figure 1A, 1B). 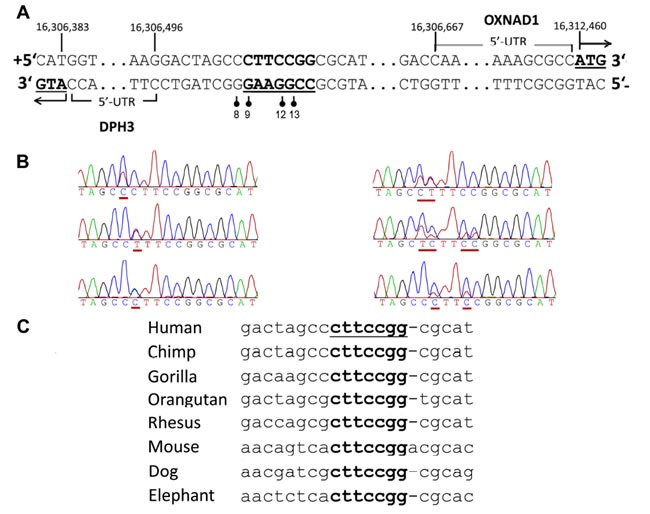 Figure 1: Recurrent somatic mutations in the DPH3 promoter region. A. The mutated positions (indicated with vertical bars with filled circles) in the promoter region of the DPH3 gene adjacent and within a predicted Ets/TCF binding site, which is shown in bold and underlined. Positions “8”, “9”, “12” and “13” correspond to the distance from transcription start site (TSS; RefSeq) of DPH3, which is transcribed from negative strand. Those mutated sites correspond to 163, 162, 159 and 158 bp positions from OXNAD1 TSS (RefSeq), respectively, which is transcribed from positive strand in opposite orientation. B. Representative Sanger sequencing chromatograms with mutated positions underlined. C. Multiple alignment of the mutated region from different species (UCSC genome browser, Multiz Alignments of 100 Vertebrates). The positions of mutations at “9”, “12” and “13” bp are conserved, the conserved motif is underlined. 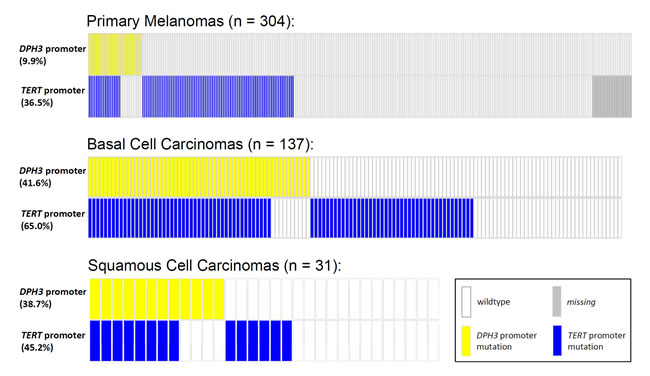 In Luciferase reporter assays carried out in two orientations, for DPH3 and OXNAD1, the promoter activity due to constructs with the -8/-9CC > TT tandem mutation was statistically significantly higher than the constructs with wild type sequence (P = 0.03 DPH3; P = 0.001 OXNAD1). The constructs with the tandem mutation showed 1.24 and 1.44 fold higher promoter activity than the constructs with wild type sequence for DPH3 and OXNAD1, respectively. The activity due to the promoter constructs with the -8C > T and -9C > T mutations was, though higher than the wild type constructs in both DPH3 and OXNAD1 orientations, but the differences were not statistically significant (Figure 3). We did not observe a statistically significant difference in the DPH3 transcription levels based on the mutational status of the DPH3 promoter in melanoma, melanocytic nevi and BCC tumors. In 20 tumors from SCC patients, seven with mutations and 13 without mutations, the DPH3 transcription was lower in tumors with mutations than those without (Suppl. Figure S3). We also did not observe any effect of mutations on the transcription levels of OXNAD1 gene in BCC (Suppl. Figure S4). 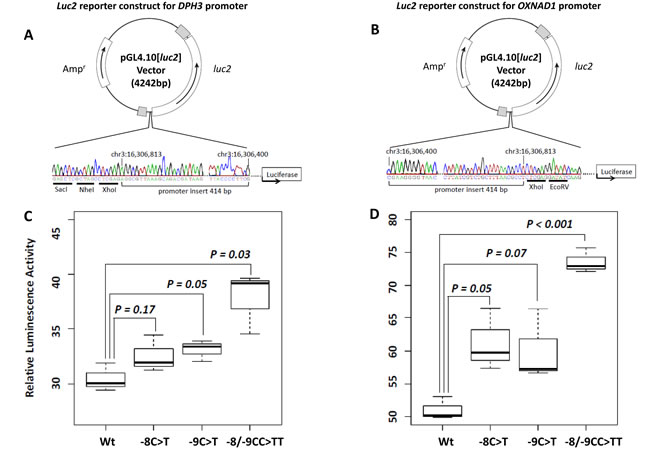 Figure 3: Luciferase reporter assays for the bidirectional promoter region. A.-B. Luciferase reporter constructs for DPH3 and OXNAD1. Promoter insert (chr3: 16,306,400-16,306,813, hg19 coordinates) was subcloned into pGL4.10[luc2] vector in two orientations: for DPH3 A. transcribed from “-” strand and for OXNAD1 B. transcribed from “+” strand. The correctness of insert orientations were confirmed by Sanger sequencing. The positive strand (containing luc2 ATG) sequence is shown for both constructs, which corresponds to the genomic DNA positive strand for OXNAD1 insert and negative strand in reverse orientation for DPH3 insert. The restriction sites in the vectors are underlined. C.-D. Relative luciferase activity due to different promoter constructs. DPH3 C. and OXNAD1 D. promoter constructs without mutations (Wt), with -8C > T, -9C > T and -8/-9CC > TT mutations were transfected into UKRV-Mel-21 melanoma cells. The reporter activity due to the inserts with the tandem -8/-9CC > TT mutation was 1.24 and 1.44 fold higher than with wild type sequence inserts for DPH3 and OXNAD1, respectively. The reporter activity in cells transfected with constructs with -8C > T or -9C > T mutations was higher than the wild type constructs but the differences were not statistically significant.

Whether the detected DPH3 promoter mutations affect transcription of adjacent genes or act as enhancers/repressors of some distant genes remains to be determined [7]. However, it may be pointed out that over-expression of Dph3 promotes the migratory ability of murine melanoma cells, whereas down regulation of Dph3 expression inhibited cellular invasion and metastasis in vivo [27]. The creation of Dph3 knock-out mice revealed that loss of both dph3 alleles causes a general delay in embryonic development and is embryonically lethal [28]. DPH3 encodes a short peptide involved in electron transfer during the synthesis of eukaryotic diphthamide and forms a complex with Kti13 which is involved in both tRNA and translational elongation factor 2 (EF2) modifications [30, 31]. Diphthamide is a modified histidine residue of archaeal and eukaryotic EF2 that helps in maintenance of translational fidelity and is itself a target of translational inhibitors, diphtheria toxin and Pseudomonas exotoxin A [32, 33].

The mutations in the DPH3 promoter were first reported in melanoma in a study based on genome wide search for mutations in the regulatory regions of the genome. The reported frequency of DPH3 mutations in melanoma from whole genome and exome sequencing data in the Cancer Genome Atlas (TCGA) approximated 16% (6/38) and 14% (25/176), respectively [4]. The sequence element with most frequent mutations was in proximity to Ets/TCF binding motif and earlier report suggested that the immediate adjacent frequently mutated nucleotide (-9 bp position) forms the part of ELF1 binding motif [3]. Members of the Ets transcription factor family are known to act as activators as well as repressors of transcription [34-36]. In the case of the DPH3 promoter the question of contributing transcription factors and the effect of the mutations remain elusive.

Although the luciferase reporter constructs with the -8/-9CC > TT tandem mutation showed statistically significant increased promoter activity for both DPH3 and OXNAD1 orientations in a melanoma cell line, we did not detect a statistically significant difference in the DPH3 and OXNAD1 transcription levels in melanomas and basal cell carcinomas. The expression of DHP3 was lower in SCC tumors with mutations than those without; however, the number of tumors investigated was limited. A plausible explanation for the observed increase in promoter activity and no effect on transcription could be due to fact that the mutations alter transient transcriptional responses or temporal patterns during cell cycle progression that are not readily detectable at the whole-tumor level as discussed earlier [4].

Primary tumors and corresponding blood samples from 21 melanoma patients for exome sequencing (Suppl. Table S1) and for follow up validation primary tumors from 304 melanoma patients, tumors and surrounding tissues from 137 skin BCC and 31 skin SCC patients (Suppl. Table S3) and 114 melanocytic nevi included in this study were retrieved from the biobank of the Instituto Valenciano de Oncologıa in Valencia, Spain. Of 114 melanocytic nevi, 16 were obtained from melanoma patients and 98 were from healthy individuals and of those 16 reported a family history of melanoma. Melanoma patients included in the study were classified according TNM staging system (based on the extent of the tumor (T), the extent of spread to the lymph nodes (N), and the presence of metastasis (M)) of the American Joint Committee on Cancer (AJCC) [37]. All BCC tumors were localized and did not include locally advanced tumors; SCC tumors were also localized without nodal or distant metastasis. Histological examination of the nevi included in the study showed that 11 were atypical, 84 compound, 4 congenital, 12 intradermal and 1 junctional. The nevi that carried DPH3 promoter mutations were compound and originated from individuals that did not have personal or family history of melanoma.

Ethical approval for the study from the institutional review board of the Instituto Valenciano de Oncologıa and written informed consent from all study patients were obtained. DNA samples from 70 tumors from urothelial bladder cancer patients, 70 gliomas, and 22 tumors from patients with squamous cell carcinoma of esophagus were retrieved from the departmental collection described previously in various studies [38-40].

Sequencing of 21 tumor/normal pairs was carried out on Illumina Hiseq2000 with paired-end 101-nucleotide reads using protocol provided by the manufacturer. Coverage statistics was generated by Flagstat and DepthOfCoverage functions from Genome Analysis Toolkit (GATK) version 3.1-1 for the capture regions with 50 bp padding [41]. The average coverage of x68 and x64 was obtained for DNA from tumor and blood tissues, respectively (Suppl. Table S4) .

Read pairs were mapped to the human reference genome (build hg19) using Burrows-Wheeler Aligner (BWA) version 0.7.5a mem function with default parameters [42]. BAM files were coordinate-sorted and duplicates were removed by Picard software version 1.102 (see URLs). Base quality score recalibration and local realignment around indels were performed by GATK prior to variant calling. Additional round of local realignment was performed jointly for tumor/normal pairs to avoid alignment differences in samples from one patient as suggested by GATK “best practices”. All preprocessing steps were performed for the capture regions with 50 bp padding.

Capture regions with 50 bp padding were used for variant calling to include flanking noncoding regions. Somatic single nucleotide variants were detected by Mutect algorithm [43]. The minimum base quality of 30 was required. Candidates with at least one high-quality base supporting alternate allele in the patient-matched normal sample were excluded. The C > T mutation at 16,306,505 was called in 2 samples (MEL11 and MEL12). Manual reviewing of the region using Integrative Genomics Viewer showed that sequencing reads supporting C > T mutations at 16,306,505 and/or 16,306,504 positions were present in 6 samples and out of those two samples had tandem CC > TT mutation (Suppl. Table S2) [44]. Mutect output examination revealed that the C > T mutation at 16,306,505 was originally detected in 4 samples but was filtered out in two because of the low allele frequency (“fstar_tumor_lod, possible_contamination” failure reason). The mutation at 16,306,504 was initially detected in two samples but was also filtered out.

The study was supported by the EU Transcan programs through German Ministry of Education and Science (01KT1511 and 01KT1402).