Wnt/β-catenin pathway, also called canonical Wnt pathway, is crucial to embryo development and adult tissue homeostasis [1, 2]. Aberrant activation of this pathway can cause uncontrolled cell growth and cell malignant transformation [1, 2]. This oncogenic pathway is initiated by some secreted glycoproteins, such as Wnt1 and Wnt3a. The binding of these Wnt proteins to their membrane receptor Frizzled and co-receptor lipoprotein receptor-related protein 5/6 (LRP5/6) leads to the dissociation of β-catenin from its degrading complex. Thereafter, β-catenin escapes from phosphorylation by glycogen synthase kinase 3β (GSK3β) and subsequent degradation by ubiquitin-proteasome system (UPS). The accumulated β-catenin in the cytoplasm translocates into the nucleus, and combines with transcription factor T cell factor/lymphocyte enhancer factor (TCF/LEF) (Figure 1). 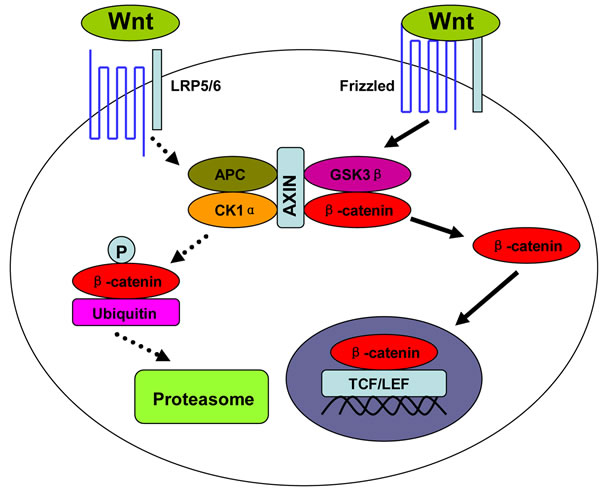 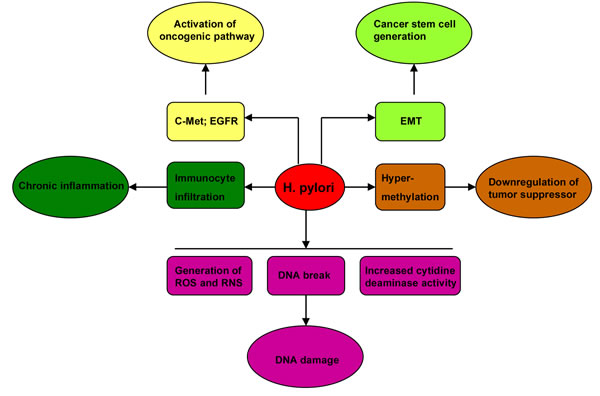 Activation of oncogenic c-met and EGFR by H. pylori 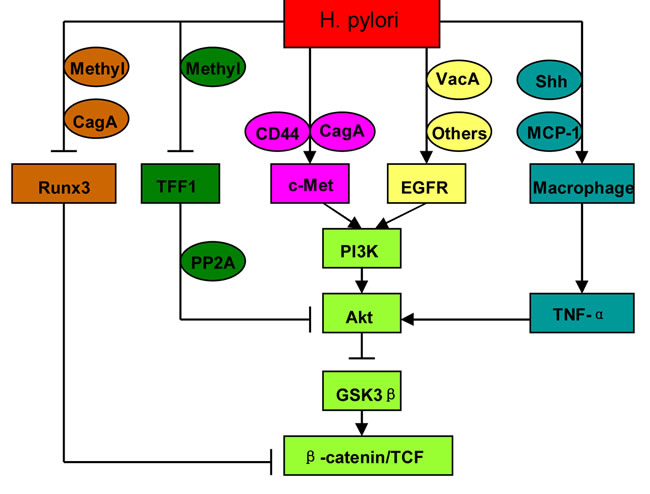 Downregulation of tumor-suppressor Runx3 and TFF1 by H. pylori

Runx3 is an important tumor suppressor for gastric cancer. Runx3 expression was frequently downregulated in gastric cancer cells because of promoter hypermethylation. The clinicopathological analysis on gastric cancers and premalignant lesions showed that Runx3 hypermethylation was correlated with H. pylori infection [45, 46]. In addition to gene hypermethylation, other mechanisms are also involved in H. pylori-induced Runx3 downregulation. CagA could directly associate with Runx3 through a specific recognition of the PY motif of Runx3 by a WW domain of CagA, and result in the ubiquitination and degradation of Runx3 [47]. CagA could also reduce Runx3 mRNA expression by inhibiting Runx3 promoter activity [48]. Runx3 suppressed Wnt/β-catenin pathway by forming a ternary complex with β-catenin/TCF4 [49]. Therefore, Runx3 loss upregulated the expression of Wnt/β-catenin target genes, and induced gastric carcinogenesis [50] (Figure 3).

MicroRNAs (miRs) are small noncoding RNAs that can up- or downregulate the expression of oncogenes and tumor suppressors. Some miRs, such as miR-101, mir-124a, miR-203, miR-210 and miR-320, were downregulated by H. pylori. MiR-101 and miR-320 were inhibited by H. pylori through CagA [64, 65]. Hypermethylation was responsible for miR-124a, miR-203 and miR-210 downregulation [66-68]. The reduction in expression of these miRs activated Wnt/β-catenin pathway in different cells or tissues [69-73], indicating that these miRs functioned as tumor suppressors. On the contrary, miR-21, miR-155, and miR-222 were upregulated by H. pylori [74-76]. These miRs stimulated Wnt/β-catenin pathway, and functioned as oncogenes or tumor-promoters [77-79]. The implication of these miRs in Wnt/β-catenin pathway in gastric cancer remains unknown. Actually, these miRs are candidates linking H. pylori infection with Wnt/β-catenin activation in gastric cancer (Table 1).

The effects of H. pylori on upstream molecules in Wnt/β-catenin pathway

Recently, a series of therapies antagonizing Wnt/β-catenin pathway have entered clinical trials. As Wnt/β-catenin pathway is essential for tissue homeostasis, it remains elusive about their clinical efficacy and safety [96]. H. pylori eradication can reduce the risk of gastric cancer, but it can not completely prevent H. pylori-related gastric carcinogenesis. One of the reasons is that the activation of oncogenic pathway, such as Wnt/β-catenin, has happened before H. pylori eradication.

This work was supported by National Natural Science Foundation of China (No. 81370517).

There is no financial conflict of interest concerning this study.