Background: Although biliary tract cancers (BTC) are common in older age-groups, treatment approaches and outcomes are understudied in this population.

Patients and Methods: Data from 913 patients diagnosed with BTC from January 1987 to July 2013 and treated at Princess Margaret Cancer Center, Toronto were analyzed. The differences in treatment patterns between older and younger patients were explored and the impact of age, patient and disease characteristics on survival outcomes was assessed.

Conclusion: In this large retrospective analysis, older patients with BTC are less likely to undergo an intervention. However, active therapy when given is associated with similar survival benefits, irrespective of age.

Tumors of the gastrointestinal tract commonly occur in older people. However, therapeutic strategies for most cancer types have been developed primarily in younger patients, with strict protocol exclusion criteria in clinical trials rendering many older patients ineligible [1]. With the aging of the global population there is growing interest and experience in outcomes for older patients. For the more common cancers, there are elderly-specific randomized controlled trials and robust age-specific subgroup analyses of large studies, the results of which guide our treatment decisions in the clinical setting. However, there is a paucity of such data for rarer tumors. Biliary tract cancers (BTC) incorporating gallbladder cancer, intrahepatic, extrahepatic and perihilar carcinoma, are uncommon, with 10,310 new cases and 3,230 deaths from bile duct cancers (excluding intrahepatic cholangiocarcinoma) and gallbladder cancers in the United States in 2013 [2]. Although the peak age for BTC is the seventh decade [3], treatment approaches and outcomes for BTC are understudied in this population.

We thus undertook this study to compare treatment approaches and outcomes for patients <70 years to those ≥70 years with a diagnosis of biliary tract cancer. Because of the sharp increase in the prevalence of age-related changes between ages 70 and 75 years [4, 5], and with approximately 90% of people showing clinical signs of aging by the age of 70 [4], we chose this as our age cut-off. We sought to identify if older age was associated with non-receipt of active treatment (surgery, chemotherapy) and whether survival outcomes differed between older and younger patients receiving therapy.

Factors associated with receipt of therapy

Table 3: Factors associated with interventions in the overall population 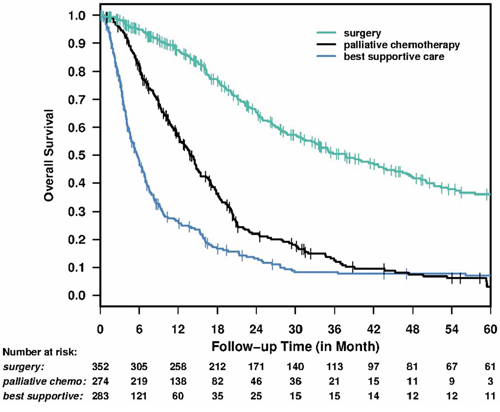 Figure 1: Overall survival for all patients by treatment group. 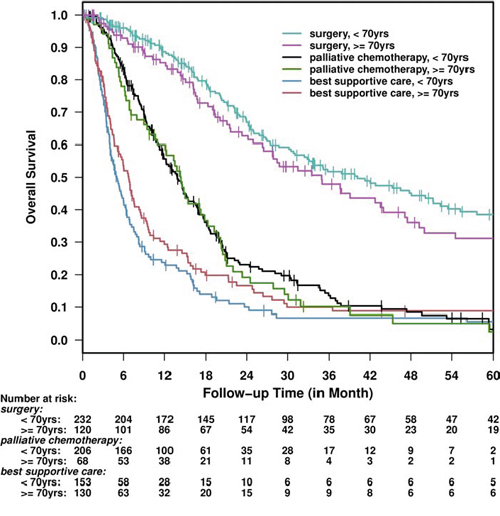 In our study, similar proportions of older (38%) and younger (39%) patients underwent surgery. Early stage disease (stage I/II) and ECOG PS < 2 were associated with surgical intervention and survival outcomes did not differ between older and younger patients. In comparison, older age was associated with non-receipt of palliative chemotherapy (p = 0.0007). However, similar survival benefit from chemotherapy was observed irrespective of age.

A small number of observational cohort studies have addressed the issue of surgery in older patients with BTC, most of which failed to show age to be an independent risk factor influencing short- and long-term survival after surgery [18]. A retrospective study from Japan reported outcomes for 54 patients ≥75 years and 152 patients <75 years following resection of gallbladder cancer [19]. Approximately 58% of patients in both age groups underwent a radical resection and survival rates were similar between the two age groups. In another small series (n = 31) Sawada et al reported outcomes for patients with hilar cholangiocarcinoma undergoing surgical resection [20]. There were no differences in postoperative morbidity rates between younger and older patients, 13% and 33%, respectively (p = 0.23) and overall 5-year survival rates were similar. This study confirmed that although surgical resection for hilar cholangiocarcinoma in the elderly is associated with relatively high morbidity rate, it is feasible. A larger study from Korea compared outcomes for older (n = 326) and younger (n = 205) patients with BTC [21] following treatments including surgery, chemotherapy and radiation therapy. Compared to our population, a lower age cut-off of 65 years was used. There was no difference in the frequency of surgery by age group in this series, and age was not a factor associated with survival in the surgical patients.

There is even less data regarding chemotherapy outcomes in older patients with BTCs. The ABC-02 trial established the combination of gemcitabine and cisplatin as the standard of care for patients with advanced BTC [22]. The BT22 study in Japan was launched at the same time as the ABC-02 study and confirmed a better outcome from combination therapy with cisplatin and gemcitabine versus monotherapy with gemcitabine alone [23]. In the ABC-02 study the median age in the gemcitabine alone group was 63 years and in the combination arm 64 years. In the BT22 study, the median ages were 67 and 65 years, respectively. Although patients up to the age of 85 were included in these studies, subgroup analyses on tolerance and efficacy in the elderly were not performed.

A number of smaller institutional studies assessing outcomes of chemotherapy in older patients have been reported. Kuriyama reported the impact of single agent gemcitabine (n = 13) as compared to BSC on survival in 28 patients aged 70 years or over with unresectable BTC [24]. The median overall survival was 9.1 and 2.9 months, for the treated and BSC groups respectively, with a 1 year survival rate of 15% and 7%, respectively. Kou et al compared outcomes for 94 older patients (≥75 years) and 309 younger patients (<75 years) receiving chemotherapy for advanced BTC [25]. There was no difference in the median overall survival between the elderly group (10 months) and younger group (11.5 months) reported.

In the study by Lee et al, older patients (≥65 years) underwent less chemotherapy (p < 0.001) than their younger counterparts, however, survival was comparable between the two groups [21].

Limitations of our study include a lack of data regarding surgical procedures performed, although all surgery was done with curative intent. In addition, intrahepatic, extrahepatic and gallbladder cancers were grouped together. However, the numbers of patients with each tumor type were equally distributed by age group and data from the United Kingdom ABC-02 study demonstrated that site of tumour within the biliary tract did not affect survival [26]. Our study also lacks data on toxicity from systemic therapy which is difficult to capture reliably retrospectively. There were only 64 patients ≥80 years and therefore meaningful sub group analysis was not possible in this cohort. Finally, this study includes data from a single-institution. However, Princess Margaret Cancer Center, as part of the University Health Network in Toronto, and the largest cancer center in Canada, is a tertiary referral center with local, regional and provincial referral pathways and thus captures data from a diverse population. Notwithstanding these limitations, this is the largest study (n = 913), comparing outcomes in older and younger patients referred to a tertiary referral centre with BTC treated with surgery, chemotherapy and best supportive care and includes patients treated in the era of cisplatin/gemcitabine doublet therapy for advanced disease and thus provides meaningful information which can help guide discussion and decisions regarding treatment in older patients in the clinical setting. Our study confirms that older patients with BTC are less likely to be offered chemotherapy compared to younger patients. However, active therapy results in similar survival benefits, irrespective of age. Given the heterogeneity of the older population, integrating assessments to better biologically stage these patients should lead to better treatment decisions. There is a growing body of evidence supporting the use of comprehensive geriatric assessments in guiding treatment decisions in older patients with cancer [27–32] and in addition, there are assessment tools available to better predict tolerance and toxicity to chemotherapy in this population [33, 34]. Treatment decisions for BTC in older patients should thus not be guided solely by the biological age of the patient, and active management should be considered for this patient population if deemed appropriate following clinical assessment.

Data were summarized for all patients and by treatment group. Frequency and percentage were reported for categorical variables, and median and range for continuous variables. Among patients who underwent surgery or palliative chemotherapy, Chi-square tests were used to test the differences in demographics and disease characteristics between older (≥70 years) and younger patients (<70 years). A generalized logistic regression was performed to identify factors associated with receiving interventions vs. best supportive care, and variables included in the analysis were age, gender, ECOG PS, CCI score, stage and site of primary. Odds ratio (OR) with 95% confidence intervals (CI) was reported, with an OR > 1 indicating a higher chance of receiving an intervention.

Survival was calculated from the date of diagnosis to date of death or censored at last follow-up date, using the Kaplan-Meier method. Date of death was obtained from patients notes or, when not documented, from the Cancer Care Ontario Registry. The Cox proportional hazards model was used to examine survival outcome by age group. Factors were included in the multivariable analysis if they reached a significance level of p < 0.25 on univariable analysis. Hazard ratio (HR) was reported, with a HR < 1 indicating a lower risk of death. Statistical analysis was conducted using SAS v9.3 (Cary, NC).

This study was supported by the Division of Medical Oncology, Princess Margaret Cancer Centre, Toronto, Canada.

No disclosures or conflicts of interest.