Background: To investigate the role of PD-L1 expression in tumor recurrence and metastasis in Chinese patients with breast cancer.

Breast cancer is currently the second leading cause of tumor-related death for females worldwide [1]. Despite the development of treatments for breast cancer, more than 50% of invasive breast cancer patients have developed distant metastases within ten years, causing treatment failure [2]. Interestingly, in recent years, immune therapy has become an emerging effective treatment for several cancers.

Recently, extended adjuvant endocrine therapy was shown to benefit patients with hormone receptor-positive breast cancer in the large sample size randomized ATLAS study [3]. However, the recurrence of breast cancer remained high in realistic clinical practice. Therefore, finding an effective biomarker to select patients with breast cancer who are at a high risk for tumor recurrence or metastasis is an urgent task.

The risk of tumor recurrence is reasonable within the 5-yearfollow-up period following treatment with adjuvant tamoxifen; however, a number of patients with luminal B/HER2 negative subtype tumors presented tumor recurrence after the 5-year period following treatment with tamoxifen [2]. Several predicting tools including Breast Cancer Index (BCI), Oncotype DX recurrence score, IHC4 [4], andHOXB13/IL17BR (H/I) [5]were used to predict the risk of late disease recurrence. Although several predicting markers have been developed, no precise factor existed that could predict the long-term survival of breast cancer patients. The primary cause of recurrence or metastases from operable breast cancer was immune resistance produced by the tumor. Immune activity plays a role in cancer metastatic immune checkpoint agonist drugs have been approved for use in treating melanoma. Previously, the PD1/PD-L1 pathway was reported as the primary factor promoting tumor recurrence or metastasis. PD-L1, which is major ligand of PD-1, is expressed in a variety of cancers. Studies have shown PD-L1 inhibition is effective treating in many malignant tumors such as non-small cell lung cancer (NSCLC) [6], renal cancer [7], triple-negative breast cancer [8] and bladder cancer [9, 10].

In total, 870 Eastern Asian patients with invasive breast cancer were enrolled in this study. The median age at diagnosis was 47.0 years (range, 21–84 years). The baseline characteristics of these patients are listed in Table 1. PD-L1 expression was more common in patients with tumors that were larger than 2cm, with lymphvascular invasion, a higher tumor grade, as well as negative ER and PR status. 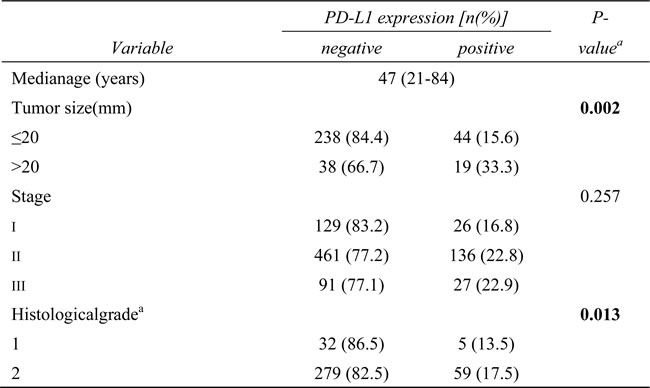 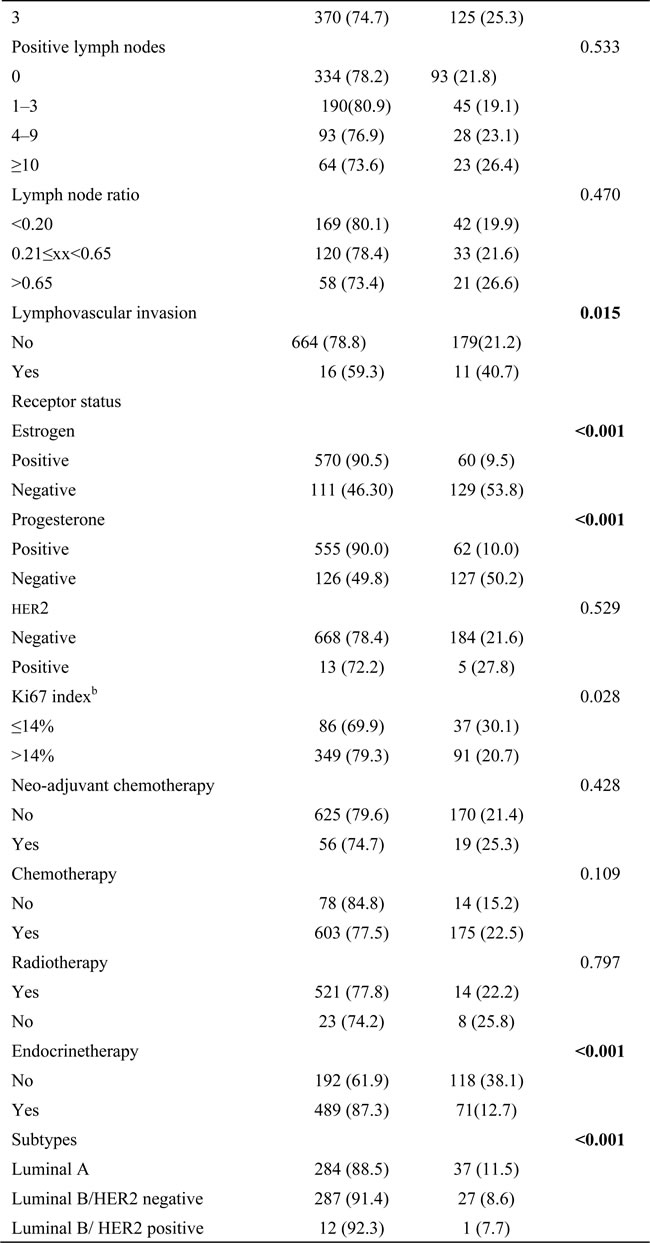 PD-L1 was found at the membrane or in the cytoplasm (or both) of tumor cells by immunohistochemical staining (Figure 1). IntratumorPD-L1 expression was observed in 189 (21.7%) patients. The relation of PD-L1 expression with various clinicopathological parameters is shown in Table 1. 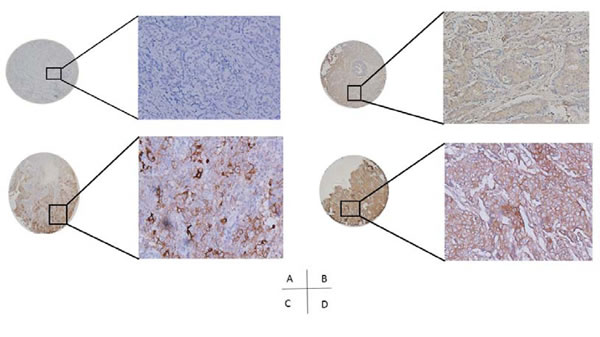 In addition, patient characteristics were more associated with the probability of positive PD-L1 expression. Therefore, we used a nomogram to predict which subtype of patients was more likely to present high PD-L1 expression. Nomogram analysis focused on clinical characteristics to predict PD-L1 positive. The results was to distinguish which subtype of patients with breast cancer should be detect PD-L1 concurrent with ER/PR/HER2 after breast surgery. in addition, our data also showed that patients with the following characteristics were more likely associated with high PD-L1 expression: larger tumor size, lymphovascular invasion, advanced nodal stage, negative ER status, negative PR status as well as HER2 status (Figure 2). 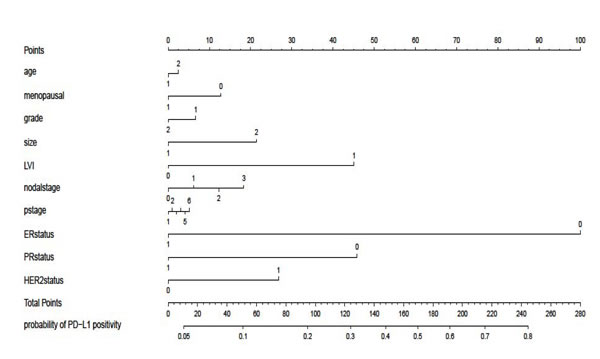 Relation between PD-L1 expression and prognosis 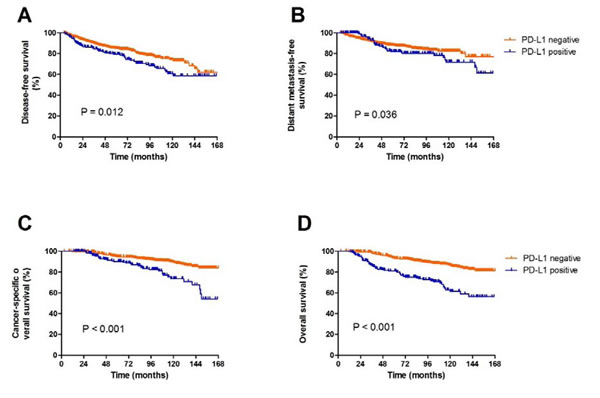 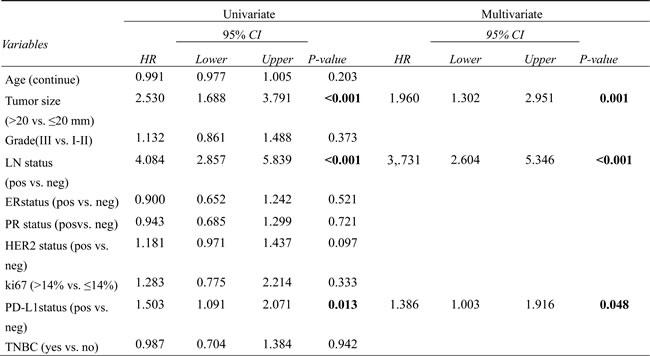 In addition, a larger tumor size, positive lymph-node status, and PR-negative, triple negative and PD-L1-positive expression were associated with poorer OS (Table 3). In the multivariate analysis, a tumor size larger than 2 cm, positive lymph-node status and PD-L1-positiveexpression proved to be independent negative prognostic factors for both DFS and OS (Table 3). 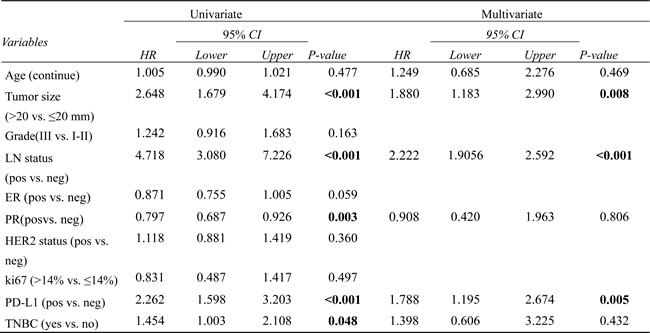 Programmed death 1 (PD-1) is a co-inhibitory receptor that is expressed on the membranes of activated T and B cells [6] and that plays an important role in tumor immune escape [7, 8]. The major ligand for PD-1 is PD-L1, which is expressed in a variety of cancers [9]. Adaptive immune responses that includePD1/PD-L1 expression are associated with breast cancer relapse. PD1/PD-L1 is an important axis that plays important roles in the infiltration of various immune effectors and in the propensity to relapse with metastatic disease. Recent evidence suggests that activation of the PD-1/PD-L1 pathway represents one mechanism that allows tumors to elude the host immune system [16-18]. Previous studies have reported that PD-L1 is involved in the negative regulation of immune response binding to PD-1 receptor and results in cancer cells evading the host immune surveillance, finally promoting metastasis [10-12].

In addition, several studies found that other malignant oncogenic genes regulated the expression of PD-L1; for example, the EGFR pathway induces PD-L1 expression [21-23]. One limitation of the present study is that no relation was found between the breast cancer-associated gene HER2 and PD-L1. Previous studies have shown that PD-L1protein or mRNA expression levels in breast cancer tumor samples were associated with large tumor size, high tumor grade, more positive lymph-node involvement, ER-negative status, PR-negative status, ERBB2-positive status, and high proliferation, as well as unfavorable molecular subtypes such as HER2-enriched breast cancer or TNBC [12, 14, 15, 17, 24]. However, a recent study showed that high PD-L1 mRNA levels were associated with better prognosis [18]. An in vitro study indicated that PD-L1 expression was shown to be higher in a basal type of breast cancer cells than in luminal type cells [13]. In this study, our analysis of breast tumor samples from 870 patients, we demonstrated that PD-L1 was more common in patients with the following clinical characteristics: larger tumor size, more positive lymph node involvement, higher historically tumor grade, higher ki67 index, more LVI and negative relation with both ER and PR.

Apart from our analysis, no studies have used a model to predict the probability of PD-L1 expression according to clinical variables. In our study, we used a logistic regression model help to determine those patients who were likely to have high PD-L1 expression. This finding has not reported previously. This model will help to select those specific patients that should be tested for PD-L1 expression and may be applicable for use in clinical practice.

This study was approved by the Sun Yat-sen University Cancer Center review board.

All patients were diagnosed with invasive ductal breast cancer with pathological confirmation at our institution from April 2000 to April 2012. All patients underwent breast conservation therapy or mastectomy. These patients received adjuvant chemotherapy and/or radiotherapy as needed according to the routine clinical practice of our center. Patients with ER/PR-positive tumors received adjuvant endocrine therapy.

Slides were stained using a Ventana Discovery XT automated system (Ventana Medical Systems, Tucson, AZ) with proprietary reagents according to the manufacturer’s protocol. Briefly, slides were deparaffinized on the automated system with EZ Prep solution (Ventana). A heat-induced antigen retrieval method was used withCell Conditioning 1 solution (Ventana). The concentration of rabbit primary antibody that reacts to PD-L1 (Cell Signaling Technology, Beverly, MA) was 1:100 in Dako antibody diluent; slides were incubated with this antibody overnight at 4°C. Then, the slides were incubated with Ventana Omni Mapanti-rabbit secondary antibody for 60 min. AVentana Chromo MapKit was used for antibody detection, and then the slides were counterstained with hematoxylin. Next, the slides were dehydrated and cover slipped as per normal laboratory protocol. All slides were independently examined by two pathologists; both of whom had no prior knowledge of the clinical parameters of the patient. Discrepancies were resolved through the simultaneous re-examination of the slides using a double-headed microscope by both pathologists. PD-L1-positive scoring denoted staining of over 5% of the tumor cell membrane with or without cytoplasm staining.