Efficiency of CD19 chimeric antigen receptor-modified T cells for treatment of B cell malignancies in phase I clinical trials: a meta-analysis

Chimeric antigen receptor (CAR) modified T cells targeted CD19 showed promising clinical outcomes in treatment of B cell malignances such as chronic lymphocytic leukemia (CLL), acute lymphoblastic leukemia (ALL) and other indolent lymphomas. However, the clinical benefit varies tremendously among different trials. This meta-analysis investigated the efficacy (response rates and survival time) of CD19-CAR T cells in refractory B cell malignances in Phase I clinical trials. We searched publications between 1991 and 2014 from PubMed and Web of Science. Pooled response rates were calculated using random-effects models. Heterogeneity was investigated by subgroup analysis and meta-regression. Fourteen clinical trials including 119 patients were eligible for response rate evaluation, 62 patients in 12 clinical trials were eligible for progression-free survival analysis. The overall pooled response rate of CD19-CAR T cells was 73% (95% confidence interval [CI]: 46-94%). Significant heterogeneity across estimates of response rates was observed (p < 0.001, I2=88.3%). ALL patients have higher response rate (93%, 95% CI: 65-100%) than CLL (62%, 95% CI: 27-93%) and lymphoma patients (36%, 95% CI: 1-83%). Meta-regression analysis identified lymphodepletion and no IL-2 administrated T cells as two key factors associated with better clinical response. Lymphodepletion and higher infused CAR T cell number were associated with better prognosis. In conclusion, this meta-analysis showed a high clinical response rate of CD19-CAR T cell-based immunotherapy in treatment of refractory B cell malignancies. Lymphodepletion and increasing number of infused CD19-CAR T cells have positive correlations with the clinical efficiency, on the contrary, IL-2 administration to T cells is not recommended.

CD19 is an antigen expressed restrictively to normal and malignant B cells but not to other normal myeloid, erythroid, megakaryocytic, or multilineage bone marrow progenitor cells [17]. Therefore, CD19 is an attractive target for immunotherapies against B-cell malignancies. Compared with regular chemotherapies, application of CD19-CAR T cells showed better clinical outcomes and prognosis in treating refractory B cell malignancies. A complete remission rate of 90% and sustained remissions of up to 2 years has been reported in a clinical trial about CD19-CAR T cell therapies in patients with relapsed or refractory ALL [14]. In a recent published clinical trial of CD19-CAR-T cells in treatment of CLL patients, 3 of 4 patients achieved complete remission lasted for 23 months [7]. They also reported 8 of 11 lymphoma patients achieved remission lasted for 23 months. However, the clinical benefit varies broadly among different trials. In Savoldo’s study, only two lymphoma patients achieved stable disease for 3 and 10 month but followed with disease progression [13]. In Cruz’s study, only half patients achieved completed response and partial response [3]. These variations among studies might due to the different execute procedures such as the design of CAR structure, methods to introduce CAR into T cells, original T cell sources (autologous or allogeneic), T-cell culture conditions, lymphodepletion regimen, cytokine supports for T cell infusion, CAR T cell infusion schedule and dosage of CAR T cell. However, the key factor for better efficiency still remains unclear. A systematic review has examined the efficacy of CD19-CAR T cell therapies but the result was limited because only 5 clinical trails included in this review [18]. In this meta-analysis, we aimed to investigate the efficiency of CD19-CAR T cells immunotherapy on current published Phase I clinical trials. We also explored the factors affected the efficiency of CAR T cells immunotherapy using meta-regression analysis. 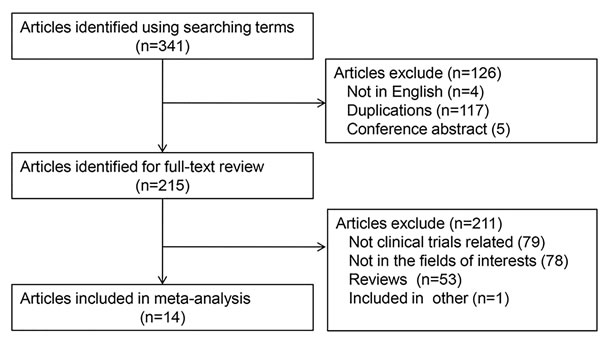 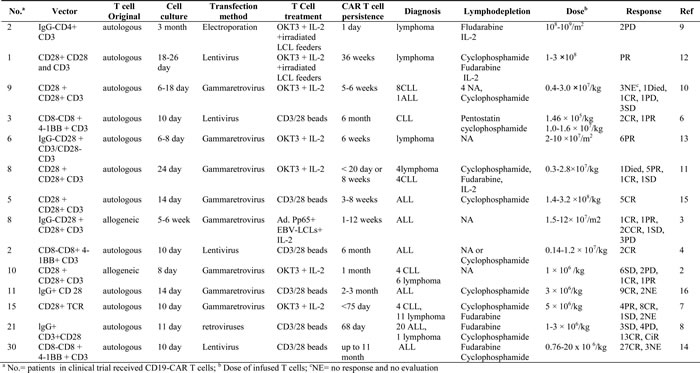 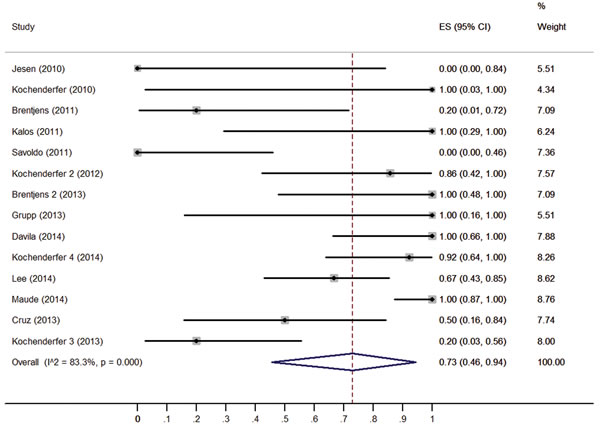 Figure 2: Forest plot for response rates and confidence intervals in each study and the overall. 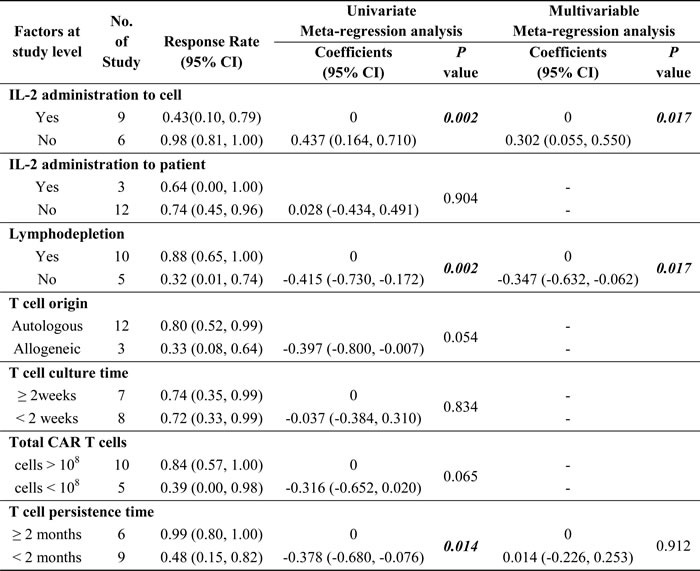 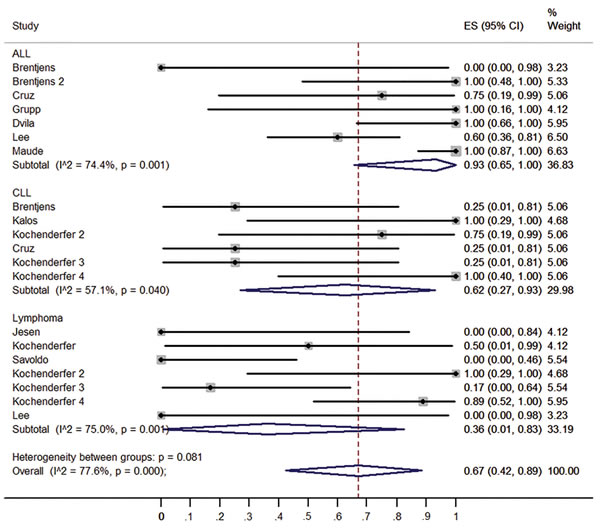 Figure 3: Forest plot for response rates and confidence internals in ALL, CLL and lymphoma patients. 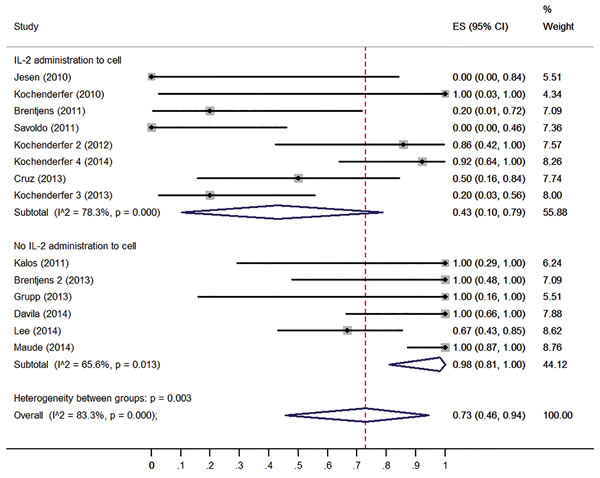 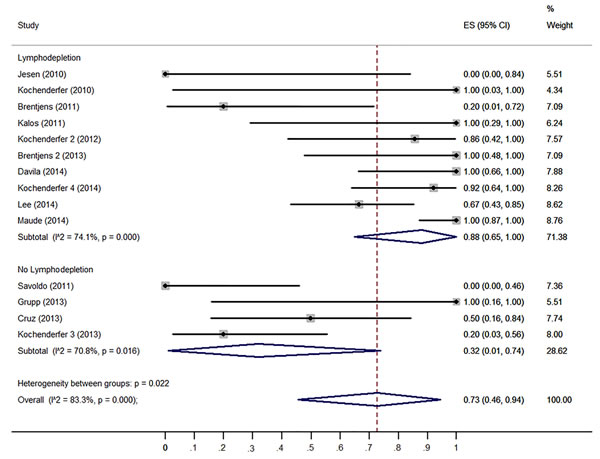 The 6-month and 1-year PFS for total 62 patients were 80.0% and 76.3% respectively (Figure 6A). The median interval of PFS was 7.0 months. Only lymphodepletion and infused CAR+ T cell number were associated with better prognosis (Figure 6B, 6C). The 6-month PFS for patients administrated with lymphodepletion regimen before T cell infusion was 94.6%, significantly higher than 54.5% in patients without lymphodepletion (P < 0.001). The 6-month PFS for patients infused more than 108 CAR+ T cell was 94.4%, significantly higher than 58.6% in patients infused less than 108 CAR+ T cell ( P < 0.001). The survival curves of other factors were list in Supplemental Figure 6. Cox proportional hazards regression model showed that lymphodepletion was independently associated with better prognosis (Table 3).

It is recommended that cytokines can be useful in improving the expansion of First generation CAR, and potentially benefit on Second/Third generation CAR T cells. As cytokine support, IL-2 can promote T cell expansion in vitro to improve treatment outcome in CD19-CAR T cell immunotherapy [29]. But our findings showed that no IL-2 administration to T cells associated with better clinical response. Compared with First-generation CARs with only a CD3 intracellular signaling domain, Second-generation CARs include another single costimulatory domain derived from either CD28 or 4-1BB [1, 30]. Second-generation of CARs showed superior outcomes in both animal study and clinical trials [1, 30]. First generation of CARs failed to elicit robust cytokine response, including IL-2 can support T cell expansion upon repeated exposure to antigen [30]. The key advantage of Second generation CARs was the induction of IL-2 secretion and T cell proliferation upon CAR cross-linking [30]. Among the fourteen trials in this Meta-analysis, thirteen clinical tirals used the Second generation CAR T cells, and part of them didn’t use IL-2 during CAR T cell culture. In these clinical trials without IL-2 administration to T cells, anti-CD3/anti-CD28 mAb-coated magnetic beads were used to stimulate T cell expansion. CD28 stimulation may play a positive role for CAR T cell proliferation. For proliferation, CD3 antibody can provide an initial activation signal, but proliferation is dependent on co-stimulatory CD28 [31]. Both CD4+ and CD8+ T cells contribute to the in vivo expansion of CAR+ T cells [13]. CD4+ T cells respond well to CD3/CD28 stimulation. Moreover, IL-2 might limit clonally expansion and the accumulation of antigen-speciﬁc effector T cells by promoting activation-induced cell death [32-33], but CD3/CD28 can increase T cell proliferation without provoking early cell death [34]. The difference between patients received IL-2 administrated T cell and no IL-2 administration T cells may come from either IL-2 or anti-CD28. However, the difference between IL-2 stimulation and CD3/CD28 stimulation still needs more verification. There was no difference between patients administrated with IL-2 or not in lymphodepletion regimen.

On-target/off-tumor effect and cytokine-released syndrome (CRS) are two major safety concerns for CAR T cell immunotherapy. On-target but off-tumor effects result from the immune response in normal cells with the CAR-targeted antigens. B-cell aplasia is an on-target but off-tumor effect of CD19-CAR-directed therapies [10-11]. CRS can be caused by cytokine secretion in response to the activation of CAR T cells. CRS is often accompanied by macrophage activation syndrome, which is characteristic of hyperinflammation with prolonged fever, hepatosplenomegaly, and cytopenias [4]. Among these trials involved in this meta-analysis, the infusions were well tolerated without any immediate adverse side effects in two trials [3, 13]. But grade 3 and grade 4 severe adverse effects associated with CD19-CAR T cell infusion were reported in all the other twelve trials, much of the toxicity that occurred in these patients was because the elevations in inﬂammatory cytokines. The adverse effects, fever, rigors, and dyspnea were commom within the first 24 hours, but can be controlled either by reducing the dose or between IL-6 blocker tocilizumab treatment. On-target/off-tumor effect and B cell aplasia, was reported in six trials. However, lymphodepletion, total number of CAR T cells and T cell persistence might also correlate with the toxicities, but in this study we didn’t evaluated the potential factors associated with toxicities.

To improve efficiency and reduce the toxicities, several new strategies are recruited for CAR T vectors. Inducible Caspase 9 (iCasp9) was integrated to CAR construction as “safety switch” to control the on-target/off-tumor toxicities [35]. The combination of CAR and a second chimeric costimulatory receptor can increase the tumor target specific and avoid side effects [36]. Modification CAR T cells to secrete IL-12 or using native virus-specific T cells to transducer with CAR vectors can exhibit longer persistence time of CD19-CAR T cells in microenvironment in order to enhance the efficiency [37-38]. CTLA-4 and PD-1 are two important immune checkpoints negatively regulating T cell activation. Blockade PD-1, PD-L1 or CTLA-4 can prolong the efficiency of activated T cell during immune reaction [39-40]. Combination of CD19-CAR T cells with PD-1/PD-1 or CLTA-4 antibodies has the possibility for better clinical outcomes.

We searched for articles published from Jan 1, 1991, to December 31, 2014 with key words “chimeric antigen receptor” combined by “AND” with “CD19” in both MEDLINE and Web of Science. Two authors (TF Z and CL) identified articles eligible for further review by screening tittles and abstracts. When a study was considered relevant, the article was reviewed thoroughly. Only literatures published in English and reported clinical trials with the application of CD19-CAR T cells in treatment of refractory B cell malignancies including B-ALL, B-CLL and lymphoma were eligible for further review.

Metaprop is a statistical program implemented to perform meta-analyses of proportions in Stata13.0 (Stata Corp, College Station, TX) [42]. Metaprop implements procedures which are specific to binomial data allows computation of exact binomial and score test-based confidence interval. It provides appropriate methods for dealing with proportions close to 0 or 100%. By using Metaprop, no studies with 0% or 100% proportions were excluded from the meta-analysis. The Freeman-Tukey double arcsine transformation was used to compute the weighted pooled response rate.

We used the Cochran’s Q test to assess between-study differences and the I2 statistic to quantify the proportion of observed inconsistency across study results not explained by chance. If the heterogeneity among trials were very large (I2 statistic>75%), the observed difference between the response rates cannot be entirely attributed to sampling error and other factors such as differences in study population, etc. could also contribute. Thus, a random effects meta-analysis was used to pool the response rates of CD19-CAR T cells in refractory B cell malignances in Phase I clinical trials. The pooled response rate describes the mean of the distribution of the estimated response rate.

All the factors analyzed in univariate meta-regression analyses were evaluated for CD19 CAR T cell immunotherapy prognosis according to progression-free survival (PFS). The interval for PFS was defined as the time from CAR T cell infusion to disease progress. PFS curve was estimated by Kaplan-Meier method and compared by log-rank test between each factors analyzed in univariate meta-regression analyses. The Cox proportional hazards regression model was used to identify independent prognostic factors. A two-sided P value was considered as statistically significant.

The authors have declared that no conflict of interest exists.