An investigation of interactive effects of exogenous and endogenous factors and tumor molecular changes can lead to a better understanding of tumor molecular signatures in colorectal cancer. We here report a molecular pathological epidemiology study in a large cohort of 945 colorectal cancer patients. Mutations of KRAS (36.6%) and BRAF (3.46%) were nearly mutually exclusive. KRAS-mutated tumors were more common in female patients (odds ratio [OR] = 1.68; P = 0.0001) and never smokers (OR = 1.60; P = 0.001). Whereas BRAF-mutated tumors demonstrated no discrepancy in aspects of gender and smoking status compared with wild-type tumors. In addition, tumors with BRAF or KRAS mutations were in correlation with elevated serum level of carbohydrate antigen (CA19-9) and carcinoma embryonic antigen (CEA) and the combination of serum biomarkers and molecular mutation status may enhance the more precise risk stratification of CRC patients. Further studies are needed to define the mechanism brought about by the aforementioned epidemiologic and clinicopathologic characteristics that may help optimize cancer prevention and precision therapy.

Colorectal cancer (CRC) is a heterogenous disease evolving from the accumulation of genetic and epigenetic modifications [1–3]. Mutations within the KRAS and BRAF oncogenes lead to constitutive activation of epidermal growth factor receptor (EGFR) signaling pathway. KRAS is mutated in 35%–40% CRC and with more than 95% mutations in codons 12 and 13 [4]. Mutation of KRAS oncogene is an early event in development of these cancers, exerting a strong influence on the growth of colonic polyps and early cancers [5]. Robust evidence suggests the predictive value of KRAS mutation in metastatic CRC treated with anti-EGFR targeted therapy [6, 7]. However, the biological and functional consequences of KRAS mutations at codon 12 may be different from those at codon 13 [8, 9]. It has been suggested that patients whose tumors harbor a KRAS Gly13Asp mutation may benefit from anti-EGFR mAb therapy [10–12]. Our previous reports have also demonstrated that KRAS codon 12 mutation, but not codon 13 mutation, is associated with more positive lymph nodes and higher pTNM stages in colorectal cancer [13]. On the other hand, BRAF c.1799T > A (p.V600E) mutation occurs in less than 10% of patients and are a strong negative prognostic marker [14, 15].

To data, few studies have evaluated the associations of epidemiologic factors and tumor molecular features. Consequently, using collected patient questionnaire data from the database of the Department of Pathology, Cancer Hospital, along with the corresponding KRAS and BRAF mutational status, we evaluated the associations between tumor molecular and epidemiological features.

A total of the 945 cases were analyzed for KRAS, BRAF gene mutations, MMR status and completed patient questionnaire registration. Of these, 945 (100%) and 924 (97.8%) yielded KRAS and BRAF mutation status, respectively. There were 346 (36.6%) tumors that had KRAS mutations, whereas 32 (3.46%) tumors had a BRAF mutation. The distribution and frequencies of the epidemiological characteristics are summarized in Table 1.

Others are two-sided χ2 test

Associations between factors and mutation status 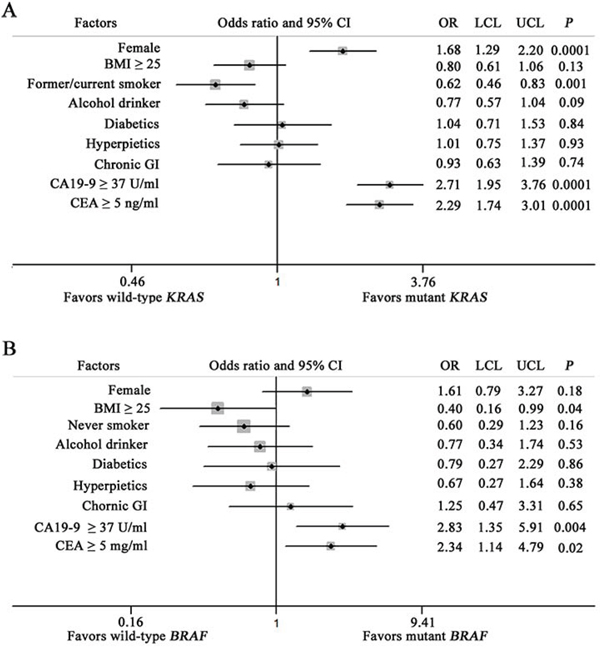 In the analysis using multivariable logistic regression models, we reviewed epidemiological characteristics in Table 2. As shown multivariably, tumors with KRAS mutation were statistically associated with female patients, never smokers and elevated serum level of CA19-9 and CEA. In addition, patients with BRAF-mutated tumors were statistically significantly to have elevated serum level of CA19-9.

Molecular pathological epidemiology, which was first consolidated by Shuji Ogino and his colleagues, is a relatively new field of epidemiology based on molecular classification of cancer [16]. In recent years, there has been a new direction of this field where we examine an interactive effect of tumor molecular features and lifestyle or other exposure factor on tumor behavior [16–19]. Furthermore, molecular pathological epidemiology has specific strengths on optimizing colorectal cancer prevention and precision therapy. To the best of our knowledge, this is the first study to summarize epidemiologic (ie, cigarette smoking and alcohol drinking) features associated with the KRAS and BRAFV600E mutation status of tumors in a large cohort of Chinese patients.

Cigarette smoking history is a known risk factor for developing colon cancer [20]. Studies have shown that carcinogens found in tobacco smoke can induce cancer-related base substitutions, such as G:C → A:T transitions in RAS oncogenes [21]. However, several large studies have indicated that cigarette smoking was more closely associated with incident CRCs characterized by KRAS mutation-negative rather than KRAS mutation-positive status [22–24]. This is in line with our observations that colorectal cancers from patients with a history of current or former smoking were less likely to harbor a KRAS mutation. Although smoking is not associated with the risk for colorectal cancer with KRAS oncogene mutations, it may be an early event in the development of colorectal cancers that arise through other underlying genetic pathways, such as mutations in the adenomatous polyposis coli (APC) tumor suppressor gene, P53 over-expression or absence of MLH1 protein expression [25, 26]. Recently studies from the large case-control study suggested that smoking is related to CIMP (CpG Island Methylator Phenotype) and BRAF mutations in colon cancer, rather than with microsatellite-unstable cancer [18, 27, 28]. Our study reveals an association between current or former smoking history with the presence of BRAF mutations in tumors (43.7% vs 31.9%), although this did not reached significantly difference due to small sample size. Tobacco exposure has been shown to stimulate DNA methyltransferase activity that is associated with CIMP and BRAF mutations [29, 30]. Previous data indicate that the CIMP-high subgroup, which exhibits a very high frequency of cancer-specific DNA hypermethylation, is strongly associated with epigenetic inactivation of MLH1 and BRAF mutation. [31] Therefore, the BRAF mutation can serve as a surrogate marker for the CIMP-high group showing sporadic dMMR status.

To our knowledge, this is the first study to suggest that patients with BRAF or KRAS mutated tumors were more likely to have an elevated preoperative serum level of CA19–9 and CEA. CA19–9 and CEA are widely accepted tumor serum biomarkers for CRC and elevated preoperative CA19–9 and CEA level have been considered as an independent prognostic factor for DFS (Disease Free Survival) in CRC patients [32]. Recent studies have been suggested that a high preoperative serum CA19-9 level was a significant marker of poor prognosis in patients with all stages of CRC [33]. Strong prognostic effect of KRAS and BRAF mutations were previously reported by Maughan et al. in COIN trial and the OS (Overall Survival) was shorter for patients with any mutation of the two oncogenes compared with all wild-type, irrespective of treatment received [34]. Therefore, tumors with BRAF or KRAS mutations were in correlation with elevated serum level of tumor biomarkers of CRC and the association of tumor biomarkers and molecular status may indicate the poor prognosis of these patients. Further work needs to estimate the more precise risk stratification of CRC patients based on the combination of serum biomarkers and molecular mutation status.

Our study had several limitations associated with its retrospective nature and single center design. Patients recollected the answers to several questions from memory when filling out the form, hence possibly introducing reporting errors while classifying several patient risk characteristics such as smoking and alcohol history and chronic GI conditions. Moreover, we did not examine rare common mutations in KRAS codons 61, 146 and NRAS mutations, which seemed to be negative predictive factors to anti-EGFR therapies.

In conclusion, our study suggests that specific epidemiologic characteristics are associated with KRAS and BRAF mutations in a large cohort of Chinese CRC patients. KRAS-mutated tumors are more common in female patients and never smokers. Tumors with BRAF or KRAS mutations were in correlation with elevated serum level of tumor biomarkers of CRC and the combination of serum biomarkers and molecular mutation status may enhance the more precise risk stratification of CRC patients. Further studies are needed to define the mechanism brought about by the aforementioned epidemiologic and clinicopathologic characteristics that may help optimize cancer prevention and precision therapy.

The tumor molecular and epidemiological records of 945 patients with corresponding paraffin-embedded material available for molecular analysis were retrospectively collected from the Department of Pathology, Cancer Hospital, Chinese Academy of Medical Sciences, Beijing, China from December 2011 to December 2013. Patients who had a history of preoperative radiochemotherapy or gastrointestinal surgical resection were excluded. The results of pathological characteristics between KRAS and BRAF mutations of these patients were published in the previous study [13]. The study was approved by the Institute Review Board of the Cancer Hospital, Chinese Academy of Medical Sciences. The methods were carried out in accordance with the approved guidelines. Each participant signed an Institutional Review Board approved informed consent in accordance with current guidelines.

Assessment of KRAS and BRAF c.1799T > A (p.V600E) mutational status was performed in the Molecular Pathology Laboratory of Department of Pathology, CICAMS as previously reported [13].

The primary objective of this study was to identify distinct epidemiological features associated with specific KRAS and BRAFV600E mutation status. Differences of patient characteristics and epidemiological factors in the two-dimensional cross-comparison were evaluated statistically by Pearson’s χ2-test or Fischer’s exact test. Statistical tests were two-sided, and P < 0.05 were considered significant. Logistic regression models were used to detect associations of these characteristics with each of the specific KRAS mutations and provided estimates of odds ratio (ORs) and confidence intervals (CIs). Statistics were carried out using SPSS software (version 16.0 of SPSS, Chicago, IL, USA).

This work was supported by a grant from Youth Backbone Program (to Jianming Ying) of Cancer Hospital, CAMS, Beijing, China, the Natural Basic Research Program of China (973 program 2014CB542002) and the National Natural Science Foundation of China (81401984).