Breast cancer (BC) is the second most common cancer worldwide, with an estimated 1.67 million new cases diagnosed in 2012 (25% of all cancers) [1]. By far, BC is the most common female cancer in China, with 187213 new cases in 2012. However, in 2012 the 5-year prevalent cases were 697327 [1]. The gap between incident number and prevalent number indicated a big health care demand for Chinese BC patients that the more prevalent patients the more health services required. Currently, the screening program was inadequate to reduce BC burden in China [2].

Current clinical evidences showed that cancer immunotherapy has been becoming the promising approaches which enhance the microenvironment anti-cancer ability and reject the T cell exhausting [3]. The mechanism of immunotherapies included stimulation and redirection of the cellular immune responses to cancer cells and the action of cell lysis [4]. Dendritic cells (DC) are the antigen-presenting cells and able to promote the generation of helper T cells and cytotoxic T cells. DC acts as effective T-cell stimulators and induces a tumor-specific immune response. Cytokine induced killer (CIK) cells are ex vivo-expanded T lymphocytes—a subset of T lymphocytes with a natural killer T-cell phenotype expressing both the CD56 and the CD3 markers, present non-histocompatibility complex cytotoxicity against target cells [5, 6]. Our previous study indicated that high-dose chemotherapy combined with dendritic cells-cytokine induced killer cells (DC-CIK) improved both progression-free and overall survival in metastatic BC patients [7]. Continuous DC-CIK infusions were capable of improving clinical efficacy, physical activity and cellular immunity among advanced malignancy patients [8]. Recently such combination of chemotherapy and adoptive T cells generated the encouragingclinical benefits for young triple negative breast cancer (TNBC) patients [9]. In a meta-analysis, DC-CIK cell therapy markedly prolonged survival time by 1-year more, enhanced immune function by NK cell increase, and improved the clinical efficacy [10]. Increasing evidences suggest that DC-CIKs can increase the survival and quality of life among BC patients. It was emerging to explore the significant predictive and prognostic biomarkers for immunotherapy to prospectively evaluate clinical treatments.

T lymphocyte subtypes were observed to be associated with BC patients’ survival [7]. Increased level of tumor-infiltrating regulatory CD4+CD25+ T lymphocytes was related with lymph node metastasis among BC patients [11]. Intratumoral CD4+CD25+ regulatory T cell number was a prognostic factor for progression-free and overall survival for BC patients with neoadjuvant and adjuvant chemotherapy [12, 13]. However, it is not feasible to obtain re-biopsies for T cell infiltration tests among advanced BC patients. Thus there was an increasing demand that whether alternatively monitoring the circulating T lymphocytes to predict the prognosis of cancer patients rather than tissue biopsy tests. We have previously reported that peripheral blood CD8+CD28− subsets could be used as the independently prognostic factor in metastatic BC [14]. There are more and more BC patients receiving DC-CIK infusion treatment worldwide but the markers of predicting the clinical responses and outcomes were few determined. Additionally, triple negative BC patients (TNBC) were reported to have special immunological characteristics by elevated expression of immune genes, suggesting the potential bebefuts from immunotherapy [15]. This study aimed to investigate the prognostic effects of peripheral blood but not tissue infiltrating CD4+CD25+ T cells for BC patients receiving DC-CIK infusions, to testify the feasibility and values of T cell subsets proportion as substitute biomarkers for breast cancer patients.

Table 1: Characteristics for BC patients with low and high CD4+CD25+ T lymphocytes

Peripheral CD4+CD25+ proportion of T cells was not related with BC patients’ progression-free survival, the median survival time being 37.0 months in patients with the proportion less than or equal to 5% and 28.0 months in patients with the proportion more than 5% (p > 0.05, Figure 1a). CD4+CD25+ proportion in peripheral blood had a significant association with overall survival (Figure 1b). Median survival length was 97.8 months among patients with proportion less than or equal to 5%, in contrast with 46.8 months among patients with CD4+CD25+proportion more than 5% (p = 0.02, Table 2). More than 5% CD4+CD25+proportion in peripheral blood increased the relative risk of death to 1.65 (95%CI 1.04, 2.62) with confounder adjustment (Table 2). Positive progesterone receptor and endocrine-therapy increased the overall survival too (Table 2). 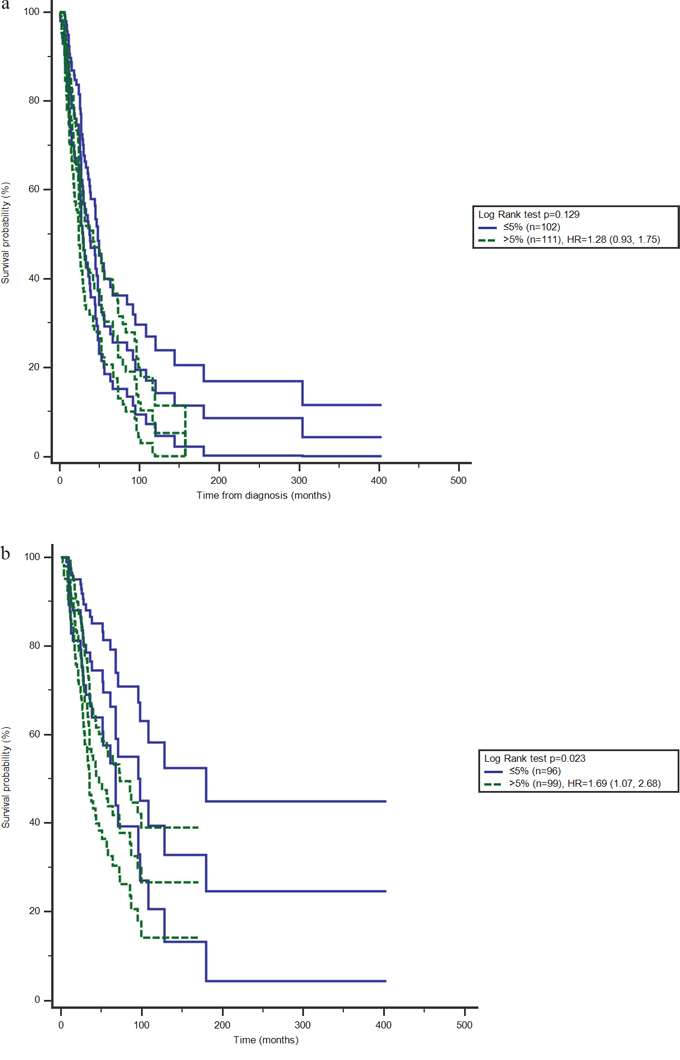 Figure 1: Effects of CD4+ CD25+ proportion of T cells on survival with 95%CI among BC patients, a. progression-free survival, b. overall survival. 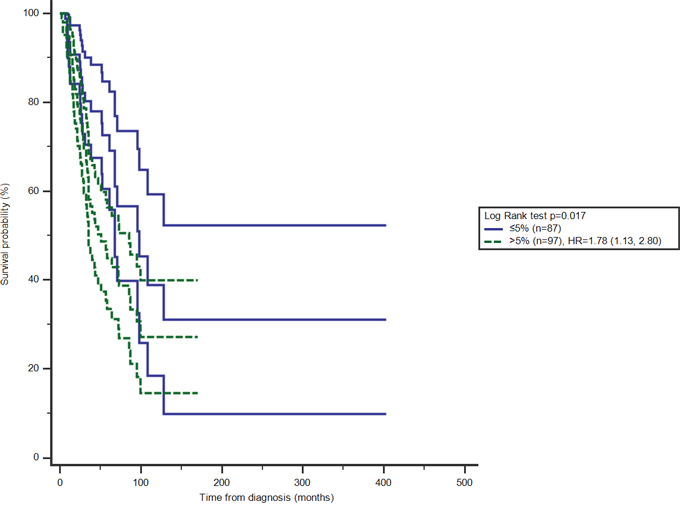 Figure 2: Effect of CD4+CD25+proportion of T cells on overall survival with 95%CI among BC patients in stage ≤ II. 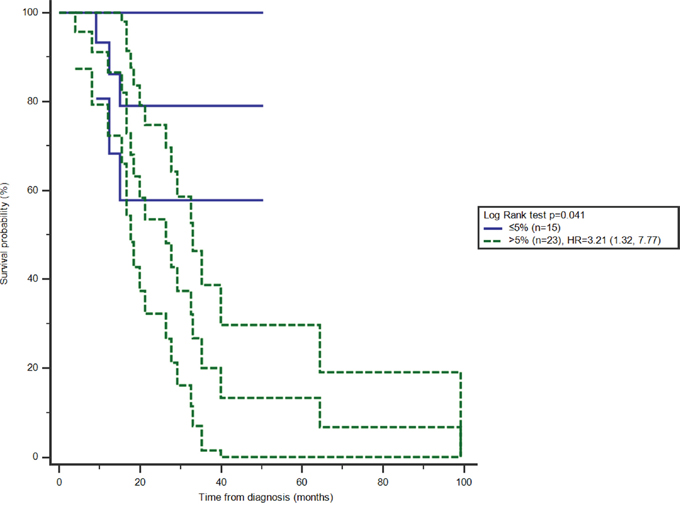 Figure 3: Effect of CD4+CD25+proportion of T cells on overall survival with 95%CI among TNBC patients.

FOXP3 is a marker for immunosuppressive CD4+CD25+ regulatory T cells. In TNBC patients, more than 15 FOXP3-positive CD4+CD25+ regulatory T per 10 high power fields in the peritumoral area was an independent prognostic factor for overall survival and progression free survival with hazard ratios of 2.4 (95% CI 1.0–5.6; p = 0.049) and 2.0 (95% CI 1.1–3.6; p = 0.032), respectively [23]. High FOXP3+ tumor infiltrated lymphocyte levels were strongly associated with prolonged recurrence-free survival among TNBC patients but not ER-negative cases [24]. Compared with Lunimal A, TNBC patients had higher levels of IL-5, IFN-γ, IFN-α2 and TNF-α, indicating the particular immune function [15]. Early stage of BC intended to have high level of IL-2 [25]. Higher average numbers of FoxP3+ cells were also significantly associated with larger tumor size [26]. The high immunity in early stage might explain the prognostic effects of CD4+CD25+ T lymphocytes in stage 0 I and II. The particular immune profiles in TNBC and early stage cases might induce the prognostic effect of CD4+CD25+ T cells and the potential immunotherapeutic targets among these patients.

DC-CIK infusion was related with BC survival and improvement of immune function. Ren et al reported combined therapy of chemo and DC-CIK immunotherapy increased the progression-free and overall survival of metastatic BC [7]. DC co-cultured with CIK cells was capable of reducing the number and function of CD4+CD25+ T cells [31, 32]. One of our data also presented an improvement in immune function and BC clinical outcome from DC-CIK infusions [8].

Since there were increasingly evidences that cancers included immunogenetic or non-immunogenetic types, we were not able to discriminate the types for those BC patients. The T cell infiltration in tumor microenvironment was not identified as well. This will lead to further studies on the precise immune modulators and determine the choices of immunotherapy including therapeutic vaccines and cytokines combinations. The sample size in subgroups was limited for estimation and introduced false-negative findings possibly. Missing data in collection was another limitation in this study.

This study was approved by both Peking University Cancer Hospital and Beijing Shijitan Hospital Institutional Review Board. Written consent was obtained from all patients.

251 Patients were invited into the study between January 2007 and June 2011. All patients were eligible for receiving standard salvage chemotherapy and had at least an Eastern Cooperative Oncology Group performance status of 0–2 and a life expectancy at least three months. We excluded patients that had already received immunotherapies following chemotherapy. 34 cases failed to test CD4+CD25+ proportion of T cells in peripheral blood after DC-CIK therapy and were excluded. After recruitment, the included 217 subjects were followed up every three months though telephone interview and collected the data of progression and survival status till March 31, 2012. The start time of follow-up was defined as the diagnosis date and 7.8% cases were lost to followup finally. One cycle DC-CIKs treatment included three infusions and T lymphocyte detection was performed at the end of the first DC-CIK cycle.

Two milliliters of heparinized peripheral venous blood was obtained from each patient. Whole blood (100 μl) was incubated in the dark with primary antibody at 4°C for 15 min. After hemolysis for 10 min, samples were centrifuged for 10 min at 1,500 rpm at room temperature, and then washed twice in PBS and subjected to flow cytometric analysis. Primary antibodies included: anti-CD3-PC5 (Beckman-Coulter), anti-CD4-FITC (Beckman-Coulter) and anti-CD25-PE (BeckmanCoulter).

The median percentage of CD4+CD25+proportion of T cells was 5% in total peripheral T lymphocytes and set as cut-off point for two groups (≤5% vs. >5%). The statistical analyses were conducted under SPSS software 17.0 version. Age was analyzed by Wilcoxon-Rank Sum test between the two groups. Stage, HER2+ status, estrogen receptor, progesterone receptor, molecular subtypes, chemotherapy, radiotherapy and endocrine-therapy were analyzed through Chi-square test. Association between CD4+CD25+ proportion of T cells, progression-free and overall survival was estimated by Kaplan-Meier method with Log-rank test. The Kaplan-Meier survival curve and 95% confidence interval (95%CI) were displayed by MedCal software (https://www.medcalc.org/index.php). Cox hazard proportion regression model was used to estimate the hazard ratio (HR) and 95%CI, where survival was set as dependent variable and independent variables included CD4+CD25+ proportion of T cells, age, progesterone receptor, chemotherapy, endocrine-therapy, and radiotherapy. All comparisons were conducted two-tailed tests with significant level of 0.05.

As intra-tumor infiltrating T cells, peripheral blood of CD4+CD25+ T cells could be regarded as an alternative biomarker to predict the clinical outcomes among whom exposure to DC-CIK infusions, especially among early stage and TNBC patients.