Background: Young non-small cell lung cancer (NSCLC) patients under the age of 40 can further be categorized into different age subgroups. Whether they have homogeneous clinical features and survival outcomes remains unexplored.

Methods: Information of 4623 NSCLC patients up to 40 years old from 1988 to 2012 was retrieved from the Surveillance, Epidemiology, and End Results (SEER) database. Clinicopathologic characteristics and survival outcomes were compared between patients diagnosed at 18–30 years old (younger group) and those at 31–40 years old (older group).

According to the recently released global cancer statistics [1], lung cancer is the leading cause of death from malignancy among males in both more and less developed countries, and the leading cause of cancer death among females in more developed countries. Non-small cell lung cancer (NSCLC) in young adults (≤ 40 years old) accounts for a very small proportion as this disease usually occurs in people at older age. Several population-based studies have compared the characteristics between young and old patients with NSCLC using age thresholds ranging from 40 to 50 [2–8]. Young patients with lung cancer were more likely to be females and have adenocarcinoma histology, while the prognosis of young lung cancer patients compared to the older counterparts was controversial [2–8]. However, NSCLC patients under the age of 40 can further be categorized into different age subgroups (for example, 18–30, 31–40). Whether they have homogeneous clinical features and survival outcomes remains unexplored. This study aimed to compare clinicopathologic characteristics and survival outcomes in age subgroups of young NSCLC patients (below 40 years) using the Surveillance, Epidemiology, and End Results (SEER) database. 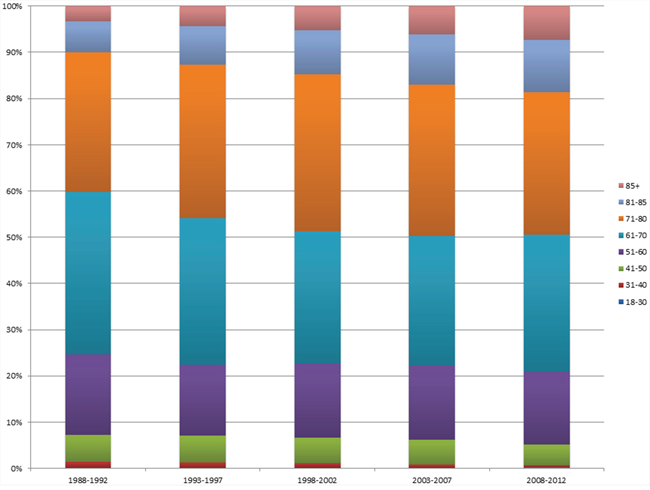 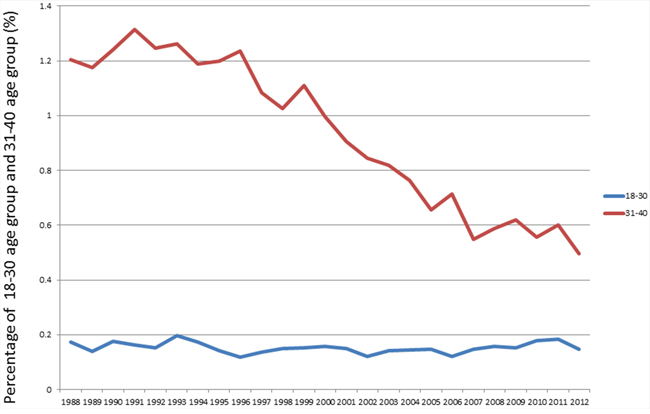 Figure 2: The proportions of patients in the two younger age groups of “18–30” and “31–40” among all lung cancer patients over time.

Table 1: Clinicopathologic characteristics of young non-small cell lung cancer patients under 40 years old according to age at diagnosis (18–30 and 31–40)

Figure 3: Comparison of lung cancer-specific survival in two A. or four B. age subgroups.

When we limited the survival comparisons between the “18–30” and the “31–40” age subgroups in stage I, stage II, stage III or stage IV patients, we found that the younger patients had significantly better LCSS in stage I (P = 0.038) and stage IV (P < 0.001) groups. There was a trend towards higher LCSS for the younger group with stage II or stage III disease, although statistical significance was not achieved (Figure 4). 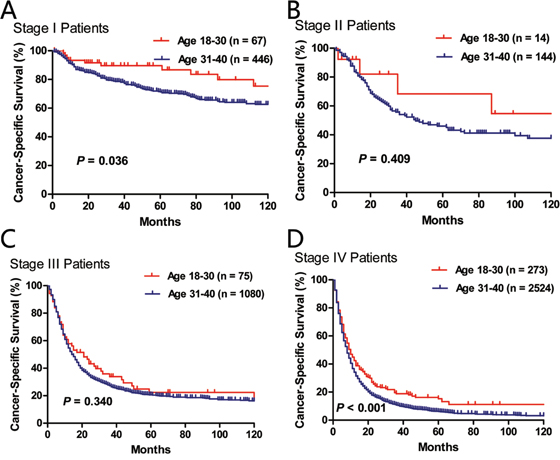 Several population-based studies have investigated the clinical features and prognosis of young NSCLC in comparison to their older counterparts. The cutoff age to denote a young lung cancer patient ranged from 40 to 50 years. However, young age also contained wide age range of population, which suggested that different age subgroups of young NSCLC might have distinctive clinical characteristics and survival outcomes. Therefore, we compared the clinicopathologic characteristics and survival outcomes in age subgroups of young NSCLC patients under 40 years old in this study.

Using SEER database, Anish Thomas and colleagues found that the incidence of NSCLC in the young (< 40 years old) decreased from 1978 to 2010 [9]. Our data further showed that the percentage of patients in the “18–30” age group was stable over the years. However, the proportion of patients in the “31–40” age group decreased over time. A previous study reported that lung cancer death rates in young adults aged between 30 and 39 years correlated strongly and inversely with the individual state tobacco control efforts [10]. Better tobacco control is one of the possible reasons for the decreasing incidence of lung cancer in patients 31–40 years old. Lung cancer in patients under 30 may be more closely correlated to biological factors, although these information were not available in SEER database.

We observed a higher proportion of “18–30” years-old patients were diagnosed after 2000 compared to the “31–40” years-old group (80.2% vs. 63.7%, P < 0.001). Gender distribution was not significantly different in the two age subgroups, although previous studies found a higher proportion of female patients in the young NSCLC [4, 6, 7]. In a previous report using SEER database, Subramanian and colleagues [4] found that African Americans were more prevalent in NSCLC patients younger than 40 compared to those who were older than 40 and suggested that lung cancer might affect African Americans at an earlier age [4]. In contrast, we observed a significantly higher proportion of African American in the “31–40” age subgroup compared to the “18–30” age subgroup (18.0% vs. 12.8%, P = 0.008).

As disease stage was usually the most important prognostic factor, we conducted stage-wise comparison of LCSS between the two age subgroups. Patients under 30 years old had significantly better LCSS in stage I (P = 0.038) and stage IV (P < 0.001) groups than patients diagnosed at 31–40 years old. Although statistical significance was not reached, there was a trend towards higher LCSS for the younger group with stage II or stage III disease. This result suggested that the association between better LCSS and young patients under 30 was not likely to be confounded by disease stage. Multivariate survival analysis adjusted for race, sex, year of diagnosis, histology, AJCC stage, tumor grade, surgery and radiotherapy also demonstrated the independent role of younger age as a positive prognostic factor.

Molecular mechanisms underlying lung cancer occurring at a young age have been explored in terms of gene polymorphisms [11–13], although there was still insufficient explanation regarding the early onset and distinctive prognosis of this lung cancer subgroup. We hope the results of our study will encourage more research in this field.

This retrospective study was based on publicly available SEER database. Data were retrieved through online access using the SEER*Stat software Version 8.2.1 (http://seer.cancer.gov/seerstat). Informed consent of this study was not required. The Institutional Review Board of Shanghai Chest Hospital approved this study.

In this study, young NSCLC patients were stratified into two (18–30 and 31–40) or four (18–25, 26–30, 31–35 and 36–40) subgroups according to age at diagnosis. Pearson's χ2 test or Fisher's exact test was used to compare the clinicopathologic characteristics in different age subgroups. Kaplan-Meier method with log-rank tests were used for survival comparisons in univariate analysis. Multivariate survival analysis was performed using the Cox proportional hazards regression to identify independent prognostic factors. Hazard ratio (HR) and its 95% confidence interval (CI) were calculated. Statistical analysis was conducted in SPSS 16.0 (SPSS Inc, Chicago, IL). The yearly bar graph and the line chart showing the proportions of patients in the “18–30” and “31–40” age subgroups among all lung cancer patients were made by Excel. All tests were two tailed, and P < 0.05 was considered as statistically significant.

The authors acknowledge the efforts of the Surveillance, Epidemiology, and End Results (SEER) program tumor registries in the creation of the SEER database.

All authors confirm that there has been no funding to support the research in regard to the paper.