Background: Bisphosphonates have exhibited anti-tumor activity in non-small cell lung cancer (NSCLC). We aimed to evaluate whether the combination of bisphosphonates with tyrosine kinase inhibitors of EGFR (EGFR-TKIs) could obtain a synergistic effect on advanced NSCLC patients with EGFR mutations.

Conclusions: Concomitant use of bisphosphonates and EGFR-TKIs improves therapeutic efficacy and brings survival benefits to NSCLC patients with EGFR mutation and bone metastases.

Lung cancer is the most common cancer worldwide [1]. Non-small-cell lung cancer (NSCLC) accounts for 85% of lung cancer and is often diagnosed at an advanced stage (inoperable stage IIIB or stage IV). For patients with advanced lung cancer, the incidences of bone metastases at diagnosis and at follow-up are approximately 30%-40%. Median overall survival time is <6 months and the 5-year survival rate is <5% [2]. Bone metastases may lead to skeletal-related events (SREs) such as bone pain, hypercalcemia, spinal cord compression, and pathologic fractures. Median survival time after the first SREs in patients with advanced lung cancer with bone metastases is only 4.1 months and SREs tend to have worse survival [3, 4].

Bisphosphonates are stable analogues of inorganic pyrophosphate that induce osteoclast apoptosis, inhibit bone resorption, osteoclast formation and recruitment [5]. Among the new-generation bisphosphonates, Zoledronic acid is efficient for the prevention of skeletal complications and generally recommended in patients with symptomatic bone metastases. Recently, preclinical data have shown that zoledronic acid might exert anti-tumor effects in NSCLC, including the inhibition of tumor cell proliferation, invasion, angiogenesis, and micrometastasis [6–10]. Clinical data also suggest that bisphosphonates may exhibit anti-tumor activity and prevent tumor progression of NSCLC [11, 12].

One hundred and fourteen patients (mean ± SD: 59.05 ± 11.2, range 36–85, male 43.9%) with metastatic NSCLC (stage IV) received EGFR-TKIs as first-line treatment between 1st January 2008 and 31st October 2013 were included in this study. All patients harboring EGFR activating mutations were confirmed by ARMS-PCR or sequencing. In 114 patients, 73 (64.0%) were 19-del mutation and 41 (36.0%) were L858R mutation. The number of patients receiving gefitinib, erlotinib and icotinib treatment was 81, 16 and 17, respectively. In these 114 patients, 62 patients had bone metastases. Among these 62 patients, 43 were bisphosphonates users and 19 were nonusers due to oligo, small and asymptomatic bone metastases. In another 52 patients without bone metastases patients, none of them received bisphosphonates. Those patients who have received bisphosphonates, 35 were treated with zoledronic acid (4 mg monthly) and 8 with pamidronate (90 mg monthly). Therefore, among all the 114 patients, 71 were treated with EGFR-TKIs alone and 43 with EGFR-TKIs plus bisphosphonates. During EGFR-TKI treatment period, there was no one SREs occurrence in EGFR-TKIs alone group. In all patients, 109 had adenocarcinoma histology, 5 patients had squamous cell carcinoma. Nine of 114 (7.9%) patients had postoperative recurrent disease. All the distributions of clinic-pathologic characteristics were well balanced between the two treatment groups and were shown in Table 1. 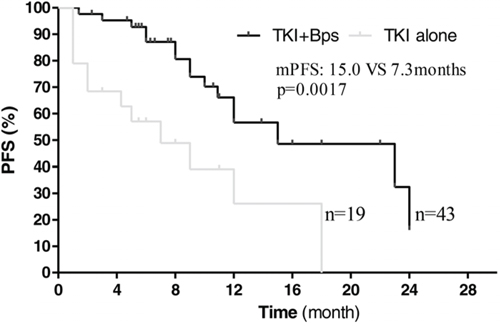 Figure 1: Kaplan–Meier curves showing progression-free survival, stratified by the use of bisphosphonates. 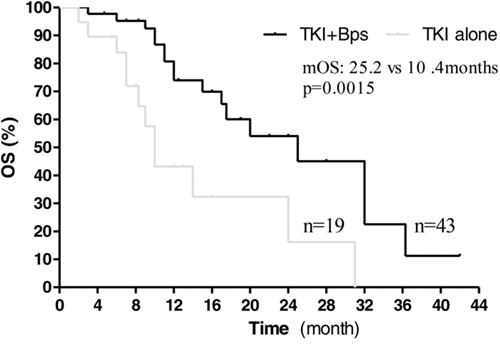 Figure 2: Kaplan–Meier curves showing overall survival, stratified by the use of bisphosphonates. 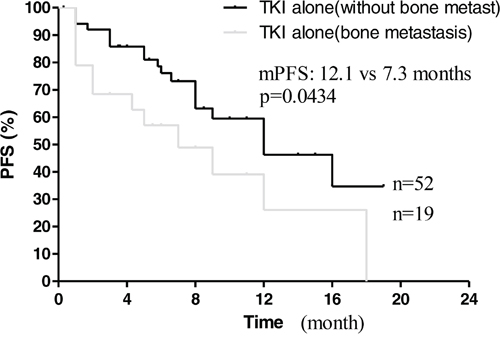 Figure 3: Kaplan–Meier curves for progression-free survival are shown for patients with bone metastases. 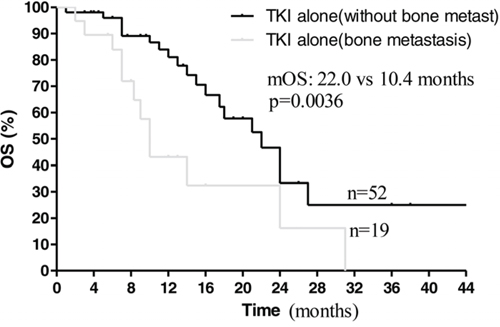 Figure 4: Kaplan–Meier curves for overall survival are shown for patients with bone metastases. 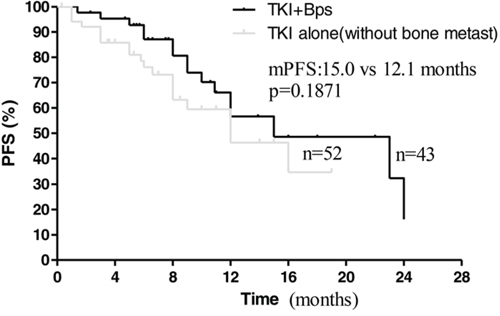 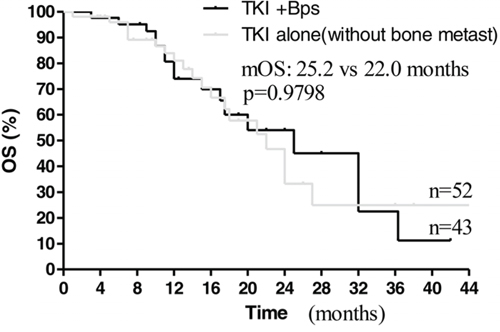 In addition, the proportion of the 114 patients who responded during the treatment period (the best overall response of CR, PR, or SD) in the EGFR-TKIs alone group was lower than combination group (80.28% vs 90.69%, P = 0.299), but the difference was not statistically significant.

Univariate analysis of factors associated with PFS and OS

Table 2 gives an overview of all previously described prognostic factors assessed by univariate analysis. The results showed that baseline hemoglobin (Hb) was associated with PFS (p = 0.012) and OS (p = 0.005). The Hb and alkaline phosphatase (ALP) in mPFS and mOS univariate analysis with a P-value <0.2 were included in multivariate model (Cox regression) to determine their independent effects.

Multivariate analysis of factors associated with PFS and OS

During the EGFR-TKIs treatment course, there was no SREs occurrence in those patients with bone metastases. Therefore, we speculated that the prolonged PFS and OS with EGFR-TKIs plus Bisphosphonates treatment did not result from SRE-prevention benefits of bisphosphonates. Currently, serial preclinical studies have confirmed that bisphosphonates have direct antitumor effects on a variety of tumors, including NSCLC [23–25]. The mechanism includes regulating cell cycle, inducing tumor cells apoptosis, inhibiting tumor cell invasion and metastasis, affecting tumors molecular signal pathways, regulating immune microenvironment and anti-angiogenesis [24–29]. However, there are two researches studied whether bisphosphonates treatment NSCLC without bone metastasis could improve survival [30, 31]. One randomized, phase III study evaluated whether zoledronic acid could delay disease progression or recurrence in patients with controlled stage IIIA/B NSCLC after first-line therapy [30]. Another randomized, phase 2 study evaluated the ability of zoledronic acid to augment the cytotoxic effects of the combination of docetaxel/carboplatin and to delay disease progression in patients with inoperable stage IIIB or IV NSCLC [31]. In those two studies, zoledronic acid treatment did not improve the survival. Furthermore, even in a clinical trial in NSCLC patients with bone metastases, the combination of bisphosphonates and docetaxel also failed to improve the survival when compared with docetaxel alone [32]. These investigations suggested that clinical effects of bisphosphonates treatment alone or combining with chemotherapy on NSCLC patients are limited.

Two preclinical studies showed that combined treatment with gefitinib and zoledronic acid produced a tumor-suppressing effect significantly, which was more effective than the individual antitumor effect of gefitinib or zoledronic acid in vitro and in vivo [10, 33]. One study showed that gefitinib could inhibit ERK1/2 and Akt protein phosphorylation, result in tumor cells arrest in G1 phase and induce apoptosis [10]. Zoledronic acid could not only inhibit ERK1/2 and Akt activating in NSCLC, but it also could inhibit STAT3 activating in other tumors. Another study showed that zoledronic acid plus gefitinib could synergistically inhibit ERK1/2, Akt and STAT3 activating, which were the major signaling pathways of EGFR [33]. As known, re-activations of Akt and STAT have proven to be important for EGFR-TKIs resistance [34, 35]. The effects of bisphosphonates on downstream signaling of EGFR might bring potential clinical benefits for NSCLC patients with EGFR mutation and who received EGFR-TKIs treatment. In this study, our data revealed that EGFR-TKIs plus bisphosphonates indeed prolonged PFS and OS in EGFR mutation NSCLC patients who received EGFR-TKIs as the first-line therapy. There was other clinical evidence of survival benefits treated with bisphosphonates and EGFR-TKIs in some malignancies with bone metastases [16, 17]. A multicentre retrospective study indicated that bisphosphonates combined with sunitinib improved the response rate, PFS and OS in renal cell carcinoma with bone metastases [16]. Another retrospective study of 76 patients with metastatic renal cell carcinoma revealed that concomitant use of bisphosphonates and EGFR-TKIs in renal cell carcinoma patients with bone metastases probably improved treatment efficacy [17]. Therefore, we considered that bisphosphonates actually could enhance, even sensitize the effects of EGFR-TKIs on NSCLC patients with EGFR mutation. The effects of bisphosphonates on signaling of EGFR-TKIs resistance are speculated to be different from chemotherapy resistance, this may account for the enhanced antitumor effects and prolonged PFS and OS.

We have to admit that our study has some limitations. First, in this retrospective clinical study, we are unable to exclude all the possibility of unequal distribution of unidentified clinic-pathologic parameters in each group. In addition, the number of cases in each group is relatively small, which might bias the results. Second, percentage of EGFR 19-del mutation (64%) is higher than L858R mutation in exon 21 (36%) in this study. As we know, 19-del mutation and L858R mutation each accounts for about 40–45% in all EGFR mutations of NSCLC [36, 37]. Previous study found that, 19-del mutation is more sensitive to EGFR-TKIs compared with L858R mutation [38, 39]. Therefore, different composing of cases may affect the results. Third, this study included 5 patients with squamous cell carcinoma, they all received EGFR-TKIs monotherapy. Previous studies have found that, even with EGFR mutations in squamous cell carcinoma, it is still the inferior efficiency treatment with EGFR-TKIs than adenocarcinoma with EGFR mutations [40]. Actually, we analyzed our data and get similar results when excluding the five patients (Supplementary Figure 1–6, S1–S6). Finally, bisphosphonates used in this study were mostly zoledronic acid, while treatment using other bisphosphonates were rare. Therefore, whether other bisphosphonates could improve patients survival combined with EGFR-TKIs needs further investigation.

One hundred and fourteen metastatic NSCLC patients (stage IV) with EGFR mutations were treated with EGFR-TKIs between 1st January 2008 and 31st October 2013, in two cancer centers (West China Hospital of Sichuan University and the Second People's Hospital of Sichuan, Sichuan province, China). Patients were eligible for inclusion in this study if they were 18 years of age or older, had been diagnosed as advanced NSCLC (stage IV), contained EGFR activating mutation, and received first-line EGFR-TKIs treatment, at least 1 measurable tumor lesions as evaluated by imaging detection. Patients who stopped EGFR-TKIs before completing 4 weeks of EGFR-TKIs treatment were excluded.

Follow-up time was defined as the time from EGFR-TKIs treatment initiation to 31st October 2013. During the treatment, all patients underwent chest CT-scan every 2–3 months. Bone metastases assessments were detected by CT scan, MRI and/or bone scintigraphy. Tumor response was defined according to the Response Evaluation Criteria in Solid Tumors 1.1 (RECIST 1.1) criteria. Treatment associated toxicity was evaluated according to the National Cancer Institute Common Terminology Criteria for Adverse Events (NCI-CTCAE) version 4.0.

Progression-free survival and OS distributions were estimated using the Kaplan–Meier method and survival curves were compared with log-rank test. Univariate and multivariate Cox proportional hazards regression analyses were performed to determine independent prognostic factors for disease survival. All the variables with significant association in univariate analysis (by Kaplan–Meier with a P-value < 0.2) were included in multivariate model (Cox regression) to determine their independent effects. The relative risk (RR) and 95% confidence intervals (CI) were calculated. The value of p less than 0.05 was considered statistically significant. Data were analysed using the SPSS 16.0 (SPSS Inc., Chicago, Illinois) software package.

This work was supported by the National Natural Science Foundation of China (No.81472197).

The authors indicate no conflicts of interest.