Lenalidomide (CC-5013, Revlimid) has been approved by the Food and Drug Administration to treat patients with multiple myeloma because it has potent anti-myeloma activities and a better toxicity profile than thalidomide. Lenalidomide's anti-myeloma mechanisms include tumoricidal, immunomodulatory, anti-inflammatory, and anti-angiogenic properties. The direct tumoricidal effect of lenalidomide occurs through caspase activation and apoptosis induction. [1] It also disrupts the stromal cell-enriched tumor microenvironment and inhibits angiogenesis. [2, 3] Lenalidomide enhances immune cell function not only by activating T and NK cells and increasing their cytokine secretion but also by decreasing IL-6 secretion in vitro. [4, 5] Lenalidomide synergistically enhances antibody-dependent cell-mediated cytotoxicity in myeloma cells. [6] All in vitro preclinical studies suggest these dual tumoricidal and immunomodulatory activities for lenalidomide. However, the principal action of lenalidomide in the anti-myeloma immune response in vivo is unclear.

Our preliminary data showed that 5TGM1 cells were resistant to lenalidomide in vitro and in severe combined immunodeficiency (SCID) mice but were sensitive to lenalidomide in an immune response-dependent manner in immunocompetent C57BL/KaLwRij mice in vivo. Therefore, 5TGM1-bearing C57BL/KaLwRij mice were taken as an ideal model for investigating the anti-myeloma immune action of lenalidomide in vivo. Here, we found that lenalidomide failed to prolong the survival of mice after CD4+ T cell but not CD8+ T cell, B cell, or NK cell depletion and this was associated with a stronger Th1 response. These results suggest that CD4+ T cells are indispensable to a lenalidomide-mediated anti-myeloma immune response in vivo. 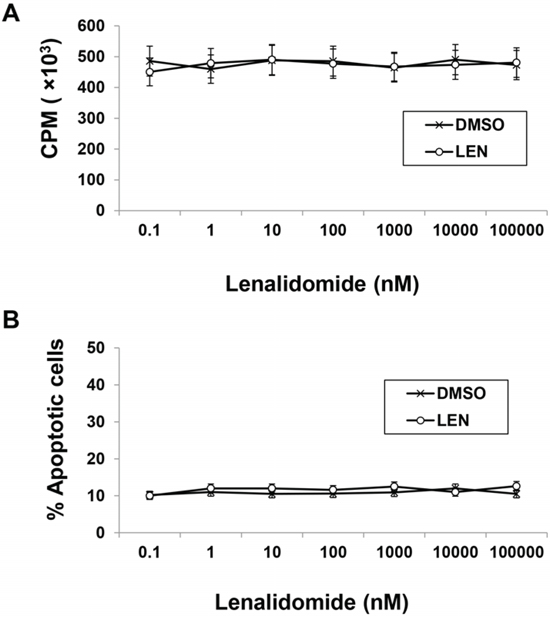 Figure 1: Murine myeloma 5TGM1 cells are resistant to lenalidomide in vitro. 5TGM1 cells were cultured for 72 hours in the presence of the indicated concentrations of lenalidomide or equal volume of DMSO (vehicle control). A. Cell proliferation was assessed by 3H-thymidine incorporation assay. B. Apoptosis was assessed by annexin V and PI staining. Results of three independent experiments are shown. LEN, lenalidomide; DMSO, dimethyl sulfoxide.

A 7-day culture with 100 μM lenalidomide did not affect 5TGM1 growth or apoptosis (data not shown). Because lenalidomide had no direct cytotoxicity on 5TGM1 cells in vitro, we next determined whether lenalidomide had any effect on the tumor cells in vivo. As shown in Figure 2A–2C, lenalidomide inhibited tumor growth and prolonged survival of 5TGM1-bearing C57BL/KaLwRij mice. Notably, 2/12 mice treated with lenalidomide were tumor-free at post-inoculation day 90 (Figure 2B–2C, P < 0.05). However, in immunodeficient B6-SCID mice, which lack T and B cells, lenalidomide treatment failed to inhibit tumor growth (Figure 2D–2E, P > 0.05) or prolong survival of tumor-bearing mice (Figure 2F, P > 0.05). That lenalidomide had no direct tumoricidal effect on 5TGM1 cells in vitro and inhibited myeloma growth in immunocompetent but not immunodeficient mice indicates that the host immune system must play an important role in the anti-myeloma activity of lenalidomide in vivo and this activity can be studied in the 5TGM1-bearing C57BL/KaLwRij model. 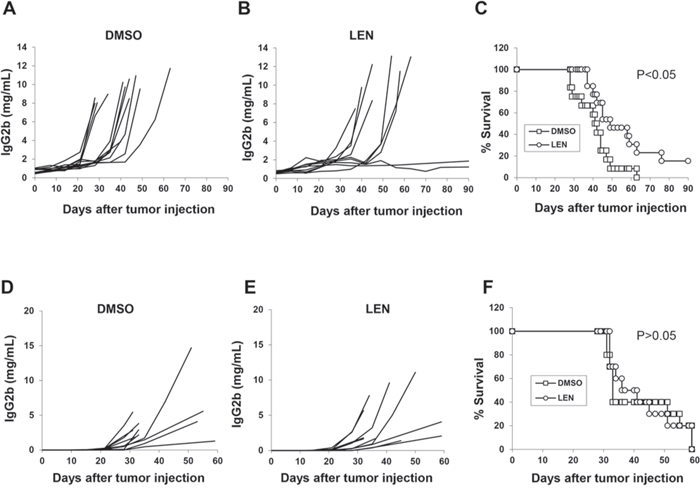 Figure 2: In vivo effect of lenalidomide in myeloma-bearing mice. C57BL/KaLwRij (A–C, 12 mice per group) or B6-SCID (D–F, 10 per group) mice were challenged with 2 × 106 5TGM1 cells via intravenous injection. After 1 week, mice received intraperitoneal injections of lenalidomide (25 mg/kg/day) or equal volume of DMSO for 21 consecutive days. Serum samples were collected weekly, and tumor burden was monitored by measuring circulating IgG2b M-protein. Concentration curves of serum IgG2b M-protein from mice receiving DMSO as vehicle control A and D. or lenalidomide B and E. C and F. Mouse survival curves. LEN, lenalidomide.

Next, we investigated whether the lenalidomide immunomodulatory effect depends on T or B cell activity. Depleting CD4+T cells significantly enhanced tumor growth and shortened survival (Figure 4A, 4B and 4E; P < 0.01, vs. isotype control). Depleting CD8+ T cells or B cells did not significantly affect tumor growth or survival (Figure 4A, 4C, 4D and 4E, P > 0.05, vs. isotype control). These in vivo results demonstrated that CD4+ T cells but not CD8+ or B cells are crucial in the lenalidomide-mediated anti-myeloma immune response in vivo. 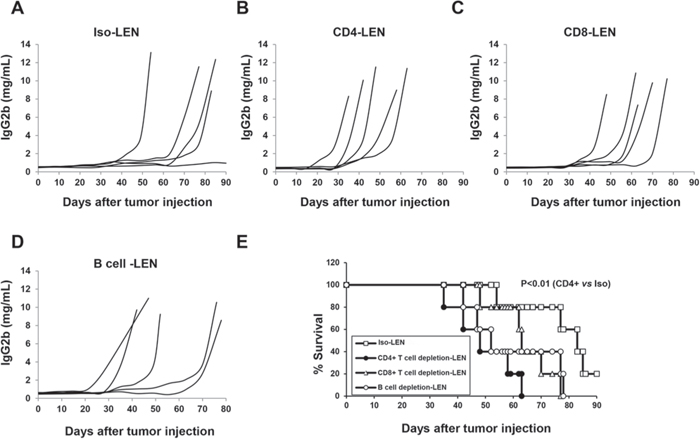 To further understand how lenalidomide affects immune cell function in vivo, 5TGM1-bearing mice were sacrificed 1 week after the final lenalidomide injection and the splenocytes were harvested, analyzed directly or restimulated ex vivo (see below) before assay. 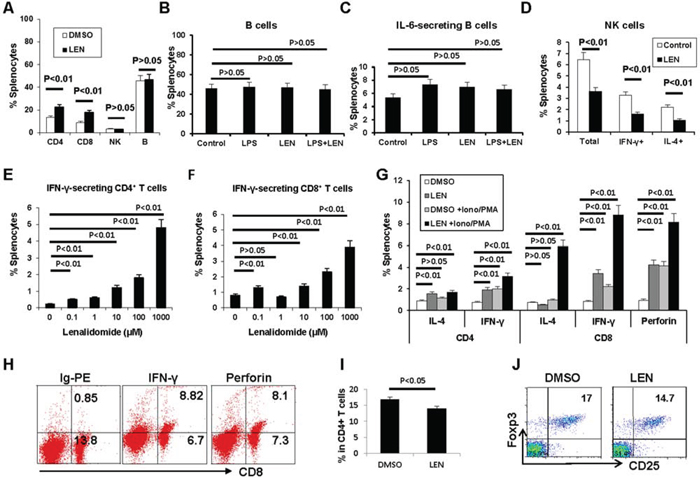 After restimulation of splenocytes with lenalidomide for 72 hours ex vivo, the B cell population showed no significant change even when treatment was combined with LPS (Figure 5B–5C; P > 0.05). The total number of NK cells, including IFN-γ-secreting and IL-4-secreting NK cells, decreased (Figure 5D; P < 0.01).

Lenalidomide, a second-generation immunomodulatory drug, exhibits antitumor activity. Lenalidomide-containing therapeutic regimens resulted in higher response and improved outcomes in the patients with MM relapse or with refractory MM [10, 11]. Previous studies demonstrated that lenalidomide had a direct tumoricidal role by inducing apoptosis and blocking tumor cell proliferation [12, 13]. Recent in vitro studies showed that lenalidomide bound to cereblon and then selectively degraded specific transcription factors — the Ikaros family zinc finger proteins 1 and 3 (IKZF1 and IKZF3) — which were necessary for myeloma survival [14, 15]. However, it is essential to investigate how lenalidomide modulates the immune response in vivo. Considering the complicated effects of lenalidomide on tumor cells and immune cells, the mechanistic study of immunomodulation is limited by the availability of a suitable tumor model that can separate these two effects. In the current study, we found that a murine myeloma cell line, 5TGM1, was totally resistant to lenalidomide toxicity in vitro. Most importantly, we found that lenalidomide inhibited tumor growth and prolonged the survival of 5TGM1-bearing C57BL/KaLwRij mice; however, it failed to inhibit tumor growth of 5TGM1-bearing SCID mice. Those results demonstrated that lenalidomide affect 5TGM1-bearing mice survival in an immune response-dependent manner only. This 5TGM1 myeloma model facilitates study of the immunomodulatory role without the direct tumoricidal effect of lenalidomide in vivo.

Our data showed that lenalidomide enhanced IFN-γ production in CD4+ T cell in vitro and in vivo, suggesting an increased Th1 response after lenalidomide treatment. Th1 polarized immune responses are associated with CD8+ T cell-mediated cytotoxicity against tumor cells and induce tumor regression. After lenalidomide treatment, CD8+ T cells produced more IFN-γ and perforin, which is consistent with the enhanced Th1 response. The cytotoxic effect of CD8+ T cells can be inhibited through recruitment and/or conversion of natural or adaptive Tregs. Our data showed that the number of Tregs was somewhat decreased in tumor-bearing C57BL/KaLwRij mice after lenalidomide treatment. An in vitro study by Luptakova et al demonstrated that lenalidomide resulted in T cell polarization toward a Th1 phenotype characterized by increased IFN-γ secretion of T cells while decreasing the number of Tregs [18], which is consistent with our in vivo data.

Although cereblon is essential for lenalidomide-mediated direct tumoricidal activity against myeloma, it also mediated T cell activation by lenalidomide or its analogues because knockdown of cereblon in primary human T cells abrogates drug-induced IL-2 expression [21]. Furthermore, lenalidomide promoted the cereblon-dependent destruction of Ikaros proteins [15]. IKZF1 (Ikaros) directly bound to the promoter region of T-bet, the master regulator of Th1 cell differentiation, and suppressed IFN-γ production and promoted Th2 polarization [22]. IKZF2 (Helios) directly bound to Foxp3 promoter and up-regulated Foxp3 expression, which results Treg differentiation [23]. IL-2 transcription was suppressed by IKZF3 through binding of its promoter. Thus, although it is not known whether lenalidomide can degrade IZKF2 as well as IZKF1 and IZKF3, it seems that lenalidomide can promote T cell activation by down-regulation of IZKF1, polarize Th1 response by degradation of IZKF3, and may slightly decrease Treg by down-regulation of the Ikaros family.

Male C57BL/KaLwRij mice were purchased from Harlan, and CPB.B6.CB17-PrkdcSCID/Szj (B6 SCID) mice were purchased from Jackson Laboratory. The Institutional Animal Care and Use Committee of the University of Texas M.D. Anderson Cancer Center approved the study. The 5TGM1 myeloma cell line was derived from 5T murine myeloma that spontaneously arose in C57BL/KaLwRij mice and was cultured in Iscove's modified Dulbecco's medium (Invitrogen) supplemented with 10% heat-inactivated fetal bovine serum (Atlanta Biologicals), 100 units/mL penicillin-streptomycin, and 2 mmol/L L-glutamine (Invitrogen).

In vivo therapeutic effect of lenalidomide

The inhibitory growth effect of lenalidomide on myeloma cells was assessed by 3H-thymidine incorporation assay. Briefly, cells were plated in 96-well plates at a density of 5 × 104 cells/well and treated with different concentrations of lenalidomide for 72 hours. 3H-thymidine, 1 μCi, was added to each well, and the cells were incubated for an additional 16 hours. The cells were washed, and the radioactivity was measured using a scintillation beta-counter (PerkinElmer Life and Analytical Sciences, Shelton, CT). The data are expressed as the percentage of the DMSO control value.

An annexin V-binding assay was used to detect the induction of apoptosis. Cells were seeded in 48-well plates with different concentrations of lenalidomide for 72 hours. To quantify the percentage of cells undergoing apoptosis, cells were washed twice with cold phosphate-buffered saline (PBS) and then resuspended in 1X binding buffer at 1 × 106 cells/mL. Subsequently, 100 μl cell suspension solution was transferred into a 5-mL tube and 5 μl annexin V and PI were added. The tubes were gently vortexed and incubated for 15 minutes at room temperature in the dark. Then 300 μl 1X binding buffer was added and analyzed immediately using a FACScan flow cytometer (Becton Dickinson, San Jose, CA). The number of apoptotic cells was determined by counting annexin V-positive cells.

An aliquot of freshly isolated cells from the spleen of lenalidomide/DMSO treated C57BL/KaLwRij mice was incubated with fluorescent isothiocyanate (FITC)-, phycoerythrin (PE)-, or allophycocyanin (APC)-conjugated monoclonal antibodies (mAbs) against CD4, CD8, B220, or NK1.1 (eBioscience, San Diego, CA) for 30 minutes at 4°C, and then washed twice and analyzed by flow cytometry. Another aliquot of freshly isolated cells was incubated with 1 μM lenalidomide or DMSO (vehicle control) with and without LPS (100 ng/mL) or ionomycin (1 μg/mL) plus PMA (300 ng/mL) at 37°C for 72 hours. These cells were then subjected to CD4, CD8, B220, or NK1.1 cell surface staining, and then treated using a Cytofix/Cytoperm kit (BD Biosciences) for intracellular staining for IL-4, IFN-γ, perforin or Foxp3 (eBioscience, San Diego, CA).

In vivo T cell, B cell, and NK cell depletion

All assays were performed in triplicate and expressed as mean ± SE. Statistical significance was determined by Student's t test. Mouse overall survival was determined using the Kaplan-Meier method. P values < 0.05 were considered significant.