As published recently in Cancer Cell, p53 impairs the apoptotic response to chemotherapy and clinical outcome in breast cancer. I discuss that, while treating tumors lacking wt p53, this phenomenon can be exploited to protect normal cells from chemotherapy because all normal cells have wt p53. Also, several therapeutic paradigms can be reassessed, including the role of cellular senescence in cancer therapy.

By demonstrating that p53-mediated senescence impairs the apoptotic response to doxorubicin (Dox), a DNA damaging and p53-inducing drug, Lozano and co-authors suggest the reassessment of the paradigm for p53 in cancer therapy [1]. Taking up this invitation, I will discuss how to spare normal cells from chemotherapy, while eliminating cancer cells lacking wt p53.

In cell culture, any cancer cell can be killed by chemotherapy. But chemotherapy poorly discriminates cancer and normal cells. It damages both types of cells. Side effects limit the therapy, precluding the elimination of cancer cells(see appendix footnote 1). If we could protect vital normal tissues from chemotherapy without protecting cancer cells, then we could cure cancer.

Although this topic is not addressed by Lozano and co-workers, the paper hints on the solution. As described, doxorubicin-treated p53 mutant tumors failed to arrest proliferation, leading to abnormal mitoses and cell death, whereas p53 wild-type tumors arrested, avoiding mitotic catastrophe and cell death [1]. In tumors lacking p53, this can be exploited for selective protection of normal cells from chemotherapy. Let us see how.

From drug to drug combination

The solution is to use two drugs (Fig. 1B): the first drug will induce p53 and the second drug will cause catastrophe during mitosis [2, 3]. Then, as Russian proverb goes, both “the wolves are sated, and the sheep are intact.” Low doses of Doxorubicin, which arrest cells with wt p53, do not arrest cells lacking wt p53. Cells lacking wt p53 enter mitosis. If such cells are treated with mitotic inhibitors (MI), then they, for sure, undergo mitotic catastrophe. In apoptosis-prone cells, this culminates in apoptosis (see appendix, footnote 2).

As a p53-inducing drug, Doxorubicin can be substituted with low doses of etoposide, actinomycin D and leptomycin. In cell culture, these agents protected normal cells as well as cancer cells with wt p53 from mitotic inhibitors (MI) such as paclitaxel, docetaxel, vinblastine and nocodazole as well as inhibitors of mitotic kinases [2-10]. Especially Actinomycin D could be used at extremely low concentrations [6, 8].Still, even at low doses, DNA-damaging p53-inducing drugs may be viewed as too damaging. Also, they may arrest certain types of cancer cells by p53-independent mechanism, requiring the inclusion of Chk1 inhibitors in the combination [11]. DNA damaging drugs can be substituted by Mdm2 inhibitors such as nutlin-3a and MI-219, which induce p53, without DNA damage [12-15]. Mdm2 inhibitors can be used for protection of normal cells during chemotherapy of tumors lacking p53. Nutlin-3a selectively protects cells with wt p53 [7, 10, 16-18]. In animals, Mdm2 inhibitors do not have dose-limiting side effects [14, 19, 20]. And most importantly, nutlin-3a decreases side effects of chemotherapy in mice [20]. The main disadvantage of Mdm2-inhibtors is that they are not approved yet for clinical use. Nutlin-3a analogs are undergoing clinical trials as anti-cancer drugs not as protective agents. They may (or may not) fail as anticancer drugs. But their utility, as protective drugs, is valuable. P53 may cause senescence and reversible quiescence [21-28]. A brief treatment with Nutlin-3a induces reversible arrest in most normal cells [29, 30] (see appendix, footnote 3). Still, to avoid senescence caused by nutlin-3a in some cell types, rapamyin can be added to the drug combination (Fig. 1C). Not only does rapamycin suppress the conversion from reversible arrest to senescence [22, 31] but it also can protect normal cells from chemotherapy [17, 32]. When normal cells are firmly protected, then additional drugs can be added to the combination to increase apoptosis in cancer cells (Fig. 1C). For example, cancer cells arrested in mitosis by MI become extremely sensitive to TNF and TRAIL. During mitosis, transcription is inhibited and this sensitizes cells to TNF and TRAIL. When transcription is inhibited, TNF can induce apoptosis even in the most apoptosis-reluctant cells [33], a goal of cancer therapy (see the next section). An example of cyclotherapeutic combination (footnote 4) containing 4 drugs is: nutlin-3a + rapamycin followed by paclitaxel + TRAIL.

Furthermore, the strategy to protect normal cells is not limited to targeting wt p53 (or loss of p53). It may involve other targets present or absent in cancer cells [34, 35]. For example, Rb is often lost in human cancer, rendering cells resistant to arrest caused by CDK4/6 inhibitors [36]. Yet, CDK4/6 inhibitors arrest normal cells. Therefore, co-administration of PD0332991 (a CDK4/6 inhibitor) plus carboplatin provided protection of bone marrow, without protection of Rb-deficient tumors [37]. Similarly, administration of PD0332991 to mice reduced treatment toxicity of radiation without compromising the therapeutic tumor response [38, 39]. Loss of Rb and p53 coincided in the most aggressive cancers [40, 41], rendering them a perfect target for cyclotherapy.Also, fasting can selectively protect normal cells from chemotherapy and decrease side effects in patients [42-45]. Among other effects, fasting inhibits the nutrient-sensing mTOR pathway [46]. Noteworthy, a combination of rapamycin and metformin protected normal cells from MI [17]. Furthermore, the combination of a protective drug (a substrate of Pgp/MRP) plus a cytotoxic drug (not a substrate) selectively kills multidrug resistant cancer cells, while sparing non-resistant cells [4, 47-49]. Finally, there are several other strategies of selective protection of normal cells [50-58]. 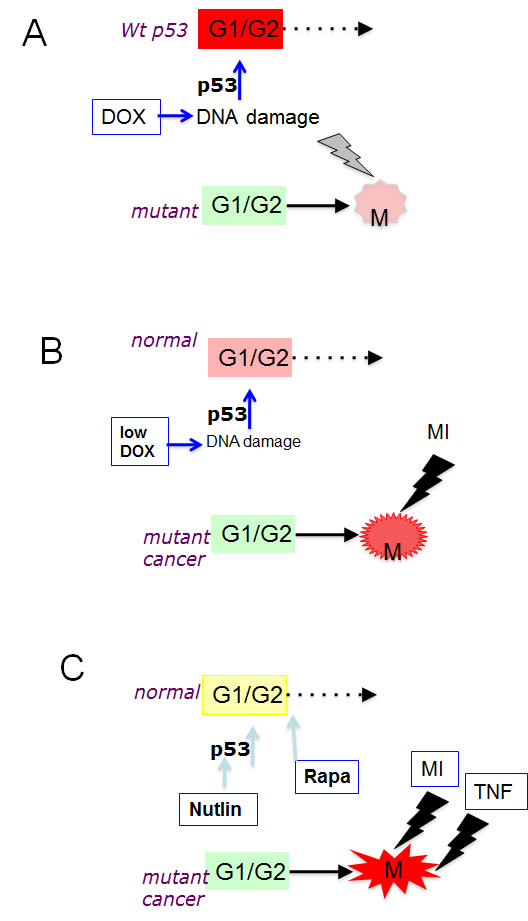 It is difficult enough to treat cancer. Why should this be done in the hardest way: by using a single drug and scrambled combinations, instead of cyclotherapeutic and other ordered combinations? In analogy, it is difficult to write poems like Pushkin, for instance, but absolutely impossible to write them by using one letter. By using at least 2 “letters”, we can increase a therapeutic window. And by using 4 or 5, one can design effective and selective therapy. Still, p53-dependent cyclotherapy will eliminate cells with mutant p53 while sparing cancer cells with wt p53, thus selecting for wt p53 tumors. And such therapy cannot be used against wt p53 cancers to start with. Of course ordered combinations are not limited to targeting p53 [34, 35, 48].

One general solution is alternating super-combinations: ordered (cyclotherapeutic) combinations can be alternated with other modalities such as conventional therapy, cancer- and tissue- selective drugs [59-63]. For example, nutlin-3 is cytotoxic to cancer cells with wt p53 [19, 64, 65]. While causing response, nutlin-3a (as any drug) will select for drug (nutlin) resistance. In fact, nutlin-3a selects for mutant p53 [66]. Then the therapy with nutlin-3a can be followed by cyclotherapeutic combination. This alternating strategy was recently discussed in detail. Like letters (drugs) can be combined in words (ordered combinations), the words can be combined in phrases.

Cell senescence is not first choice

An important point to reassess is whether senescence is a goal of cancer therapy. Fifteen years ago, it was accepted that it is apoptosis that is a goal [67-70]. In fact, chemotherapy induces apoptosis in curable malignancies such as leukemia, lymphoma and childhood cancers. Unfortunately, most common cancers are apoptosis-reluctant. In most common cancers, apoptosis is not a predictive marker of the therapeutic response. However, one may argue that these cancers are poorly curable exactly because chemotherapy does not induce apoptosis. So it is not that apoptosis is not a goal, simply it is not easily achievable in the majority of cancers. (Note: Still certain drug combinations cause apoptosis in the most apoptosis-reluctant cells. These combinations could be used when normal cells are protected as shown in figure 1C). In apoptosis-reluctant cells, standard chemotherapy cause either slow cell death or senescence (at low drug concentrations). Therefore, it was suggested that senescence is a feasible goal [71, 72], perhaps because it can by induced in common cancers by almost any cytostatic drug. Conventional anti-cancer drugs at low concentrations all induce senescence in cell culture but do not cure cancer patients. Either they do not induce senescence in the organism or senescence is not sufficient or both.

The paper by Jackson et al demonstrated that senescence is not effective, whereas apoptosis is effective [1]. Furthermore, a senescent phenotype including hyper-secretory and pro-inflammatory features seems to be counter-productive [1], in agreement with an existing paradigm [71, 73]. Senescence is a form of cell-cycle arrest, when oncogenic and growth-promoting pathways are still active [74]. Whereas cell-cycle arrest is a barrier to cancer growth (by definition), a senescent phenotype (due to over-activation of growth-promoting pathways in arrested cells) is not [74]. Two therapeutic approaches can be suggested. First, senescent cells can be further targeted [75]. Second, rapamycin can partially suppress the senescent phenotype without abrogating cell cycle arrest [31]. If the senescent phenotype is not of any importance for anti-cancer therapy, co-treatment with rapamycin will not prevent antitumor effect of doxorubicin. This could be tested in the Lozano model [1]. Noteworthy, rapamycin can be employed to prevent senescence of normal cells (Fig. 1C) and cancer cells. And the same modalities (rapamycin, metformin, nutlin-3a, fasting) can be used for protection of normal cells and for cancer prevention [76-80]. And calorie restriction and rapamycin extend lifespan in diverse species [81-83]. This may be not a co-incidence. But this is a topic for another article.

Footnote 1: In cancer patients only a few types of cancer are curable by chemotherapy alone. Curable cancers arise from tissues prone to apoptosis such as lymphoid, testicular, embryonic and placental/endometrial. For example, testicular germ cell tumors with wt p53 are very sensitive to p53-inducing chemotherapy [84, 85]. Following therapy, relapsed tumors often lack wt p53 and are resistant to therapy [86-88]. Most common (aging-related) cancers such as breast, prostate, colon, gastric, thyroid, pancreatic, lung are hardly curable by chemotherapy, because they are not more sensitive to chemotherapy than normal cells are. In such cases, chemotherapy cannot eliminate cancer cells, without destroying normal cells of vital tissues.

Footnote 3: The choice between quiescence and senescence is determined in part by the activity of the nutrient-sensing, growth-promoting mTOR pathway [24-28, 93-96]. When the cell cycle is arrested (by any means) but growth-promoting pathways are not, then cells become senescent. Rapamycin decelerates geroconversion (the conversion from reversible arrest to senescence) [22, 31]. By inhibiting gerogenic pathways such as mTOR, nutlin-3a by itself can suppress senescence, thus causing reversible arrest instead [21-23].

93. Leontieva OV, Blagosklonny MV. DNA damaging agents and p53 do not cause senescence in quiescent cells, while consecutive re-activation of mTOR is associated with conversion to senescence. Aging (Albany NY). 2010; 2: 924-935.