To compare the log odds of positive lymph nodes (LODDS) with the number of positive lymph nodes (pN), lymph node ratio (LNR), removed lymph node (RLN) count, and negative lymph node (NLN) count in determining the prognosis of patients with esophageal squamous cell carcinoma (ESCC) after esophagectomy. The records of patients with ESCC who received esophagectomy were retrospectively reviewed. The log-rank test was used to compare curves for overall survival (OS), and Cox regression analysis was performed to identify prognostic factors. The prognostic performance of the different lymph node staging systems were compared using the linear trend chi-square test, likelihood ratio chi-square test, and Akaike information criterion. A total of 589 patients were enrolled. Univariate Cox analysis showed that pN stage, LNR, RLN count, NLN count, and the LODDS were significantly associated with OS (p < 0.05 for all). Multivariate Cox analysis adjusted for significant factors indicated that LODDS was independent risk factor on overall survival (OS), and a higher LODDS was associated with worse OS (hazard ratio = 3.297, 95% confidence interval: 2.684–4.050, p < 0.001). The modified Tumor-LODDS-Metastasis staging system had better discriminatory ability, monotonicity, and homogeneity, and better optimistic prognostic stratification than the Tumor-Node-Metastasis staging system in determining the prognosis of patients with ESCC. The LODDS staging system was superior to other lymph node classifications in determining the prognosis of patients with ESCC after esophagectomy. LODDS may be incorporated into esophageal staging system if these results are eventually confirmed by other studies.

Esophageal cancer (EC) is a common malignancy of the gastrointestinal system, and esophageal squamous cell carcinoma (ESCC) is the major type of EC in China [1, 2]. Currently, the pathologic nodal (pN) stage of EC is determined by the number of positive lymph nodes (PLNs) [3]. However, inaccurate lymph node dissection and pathological evaluation may cause understaging of pN stage and inappropriate treatment, the so-called phenomenon of stage migration [4, 5]. There are several nodal staging systems which have been proposed and investigated to provide a more accurate nodal staging system, including the lymph node ratio (LNR), the number of removed lymph nodes (RLNs), and the number of negative lymph nodes (NLNs) [6–13]. The number of RLNs is an important indicator of the accuracy of staging. However, the therapeutic and prognostic value of the number of RLNs remains controversial [7, 14–16]. In addition, for node-negative EC patients, the LNR status is the same as pN0 classification, and thus LNR does not provide a more accurate prognosis than Tumor-Node-Metastasis (TNM) staging. Moreover, several studies have suggested that a higher number of NLNs is associated with better survival [9–11].

Prognostic impact of the LODDS on OS 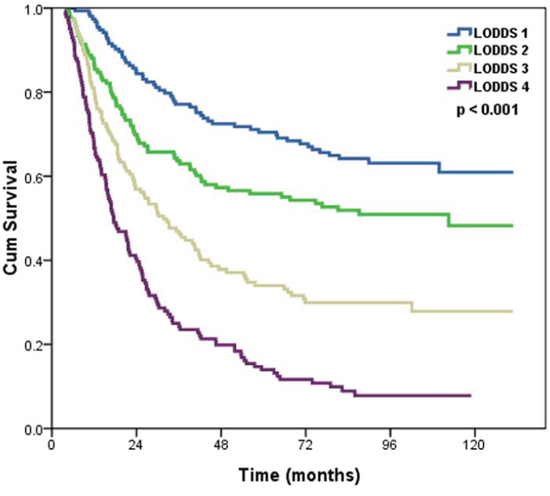 Figure 1: Effects of the LODDS on the survival of ESCC patients.

Figure 2: Effects of the LODDS on the survival of ESCC patients with pT1–2 stage A, pT3 stage B.

Figure 3: Effects of the LODDS on the survival of ESCC patients with pN0 stage A, pN1 stage B, pN2-3 stage C.

Figure 4: Effects of the LODDS on the survival of ESCC patients with G1 A, G2 B, and G3 C. disease.

As expected, analysis of patients by cancer stage from the 2009 UICC/AJCC classification system indicated poorer OS in patients with more advanced cancer (p < 0.001) (Figure 6A). We developed a Tumor-LODDS-Metastasis (TLM) staging system by replacing the pN stage with the 4 different LODDS classifications. In this new staging system, there was no patient with stage IA. Survival analysis showed that the TLM staging system was also effective in predicting the survival of patients with ESCC (p < 0.001) (Figure 6B).

Lymph node status is one of the most important factors used to predict survival in ESCC patients. In the original TNM staging system, lymph nodes were simply categorized as absent (N0) or present (N1) [29]. However, there is increasing interest in using the detailed status of lymph nodes for determining the prognosis of patients with EC. The staging system for EC from the 7th edition of the AJCC/UICC reclassified the pN stage according to the number of PLNs [3]. However, the number of RLNs affects the number of PLNs, so staging by PLN count alone has limited use because it may lead to stage migration [4, 5]. In recent years, several nodal staging systems including LNR, RLN count, and NLN count indicated that these parameters had prognostic value for EC patients [6–13]. The LODDS value is a novel indicator of lymph node status that has the potential to further improve the accuracy of pN classification and thereby provide a more reliable and accurate prognosis.

Recent studies that considered the LODDS focused on colorectal cancer, gastric cancer, and pancreatic cancer. These studies showed that use of the LODDS may help to provide a more accurate prognosis of such patients, and that it was superior to other systems used for the staging of lymph nodes [17–23]. To the best of our knowledge, the present study is the first to confirm the prognostic performance of the LODDS in ESCC.

The current study had several limitations that should be considered. First, this was a single-center retrospective analysis. Thus, prospective studies are needed to confirm our results. Second, we excluded patients with stage IV EC, so the relevance of our findings to these patients is unclear. In addition, we used cut-off points of LODDS classification determined according to the interquartile range. To date, no study has investigated the use of LODDS classification in EC, and so the optimal cut-off points have not yet been established.

In conclusion, our findings indicate that the LODDS is independently and significantly associated with survival of patients with ESCC, and that its prognostic value is superior to the other lymph node staging systems including pN stage, LNR, RLN count, and NLN count. LODDS may be incorporated into esophageal staging system if these results are eventually confirmed by other studies.

We retrospectively reviewed the records of patients with ESCC who received radical esophagectomy from October 2002 to March 2007 in Sun Yat-Sen University Cancer Center. The inclusion criteria were: (i) resectable thoracic ESCC with radical esophagectomy and lymph node dissection; (ii) staging as pT1–3N0–3M0 according to the 7th edition of the American Joint Committee on Cancer and the Union for International Cancer Control (UICC/AJCC) TNM staging system; (iii) negative surgical margin (R0); (iv) no preoperative radiotherapy or chemotherapy. Patients died within 3 months after esophagectomy were excluded. This study was approved by the ethics committee of Sun Yat-Sen University Cancer Center. All patients provided written consent for storage of their information in the hospital database and for use of this information in our research.

Patient clinicopathologic factors including sex, age, pathologic tumor (pT) stage, pN stage, histologic grade, tumor location, LNR, RLN count, NLN count, and LODDS were used to assess the risks of overall mortality. The pT and pN stages were determined according to the 7th edition of the AJCC/UICC staging system. The total number of RLNs was the number of dissected lymph nodes from the cervical, intrathoracic, and abdominal regions. The number of NLNs was obtained by subtracting the number of PLNs from the total number of RLNs. The LNR was defined as the ratio of the number of PLNs to the number of RLNs. The LODDS was defined as log10([PLNs + 0.5]/[NLNs + 0.5]), in which 0.5 was added to both the numerator and the denominator to avoid an infinite number [24].

Surgery was performed according to our previously reported [6, 11]. Briefly, all patients received radical esophagectomy and lymphadenectomy. The most common surgical approaches included the left thoracotomy, the Ivor-Lewis approach, and the cervico-thoraco-abdominal procedure. Extensive lymph node dissection in the posterior mediastinum and abdomen was routinely performed. The lymph nodes in the middle and lower mediastinum, including the periesophageal, parahiatal, subcarinal, and aortopulmonary nodes were systematically dissected. In the abdomen, an upper abdominal and retroperitoneal lymph nodes dissection was performed including the celiac, splenic, common hepatic, left gastric, lesser curvature, and parahiatal nodes. Cervical lymphadenectomy was not routinely undertaken. Three-field lymphadenectomy was performed in those with suspected supraclavicular lymph node metastasis.

Follow-up after surgery consisted of a hospital visit, telephone call, or mail. In general, patients were scheduled for clinical follow-up every 3 to 6 months, including a physical examination, laboratory tests of complete blood counts, liver function test, chest radiography, ultrasonography, esophagography, and endoscopy. In addition, a fluorine-18-fluorodeoxyglucose positron emission tomography scan was performed if necessary. The endpoint of this study was overall survival (OS). OS was calculated as the time from the date of diagnosis to the date of death from any cause or the date of the last follow-up.

All data were analyzed using the SPSS statistical software package (version 16.0; IBM Corporation, Armonk, NY, USA). The χ2 and Fisher’s exact probability tests were used to assess differences in qualitative data. Recognizing that RLN count, NLN count, and LODDS may have been incompletely counted or affected by natural inter-individual variation in nodal distribution, there were examined as a categorical variable based on quartiles. The optimal cut-off point of RLN count and NLN count was 14 and 13, respectively, according to our previously reported [9]. The survival curves were plotted by the Kaplan-Meier method and p-values were calculated using the log rank test. Cox regression analysis was performed to identify significant prognostic factors. A p-value less than 0.05 was considered statistically significant.