Almost one million new cases of stomach cancer were estimated to have occurred in 2012, making it the fifth most common malignancy in the world. More than 70% of cases occur in developing countries and half of the world’s total cases occur in Eastern Asia [1]. Etiologically, gastric cancer is associated with the combined effects of environmental factors and susceptible genetic variants, including the accumulation of genetic and epigenetic alterations [2–4]. H. pylori infection, smoking, and ingestion of salt-preserved foods and salt are regarded as risk factors for gastric cancer [5]. Approximately 1–3% of gastric cancer is hereditary diffuse gastric cancer. In roughly 30% of familial gastric cancers, a germline mutation in one allele of the E-cadherin gene (CDH1) can be identified. Inactivation of the second allele occurs either by mutation or hypermethylation. The estimated life-time risk of developing gastric cancer in carriers of a CDH1 mutation is 67% in men and 83% in women [5–7]. According to a recent study that performed targeted deep sequencing in 167 cases of gastric cancer, TP53 was among the most commonly mutated genes (35%). Other frequently mutated genes identified were PI3KCA (6%), CTNNB1 (5%), KRAS (5%) and SMAD4 (4%) [8]. A number of tumor suppressor genes, such as hMLM1, p14, p15, p16, GSTP1, RASSF1, COX-2, APC, CDH1, CDH4, DAP-K, THBS1, TIMP-3, RARβ, MGMT, CHFR, DCC, RUNX3, TSLC1, BCL2L10, IRX1, CMDM and UCHL1, are frequently silenced by hypermethylation in gastric cancer [9–12].

Naked cuticle homolog1 (NKD1) and 2 (NKD2) are two mammalian orthologs of drosophila naked cuticle [13, 14]. NKD1 is located in human chromosome 16q12.1, which has frequent loss of heterozygosity in human breast and hepatocellular carcinoma [15–17]. NKD2 is located in chromosome 5p15.3, and loss of heterozygosity is frequently found in this region in colorectal and gastric cancer [18, 19]. In both zebrafish and mice, NKD inhibits canonical and non-canonical Wnt signaling [14, 20, 21]. Myristoylation of mammalian NKD2, but not NKD1, interacts with the cytoplasmic tail of TGF-α and accelerates TGF-α processing and cell-surface delivery [22]. In addition, overexpression of TGF-α protects the NKD2 protein from rapid ubiquitin-mediated proteasomal degradation in an EGFR-independent manner in HEK293 cells [23]. NKD2 has been reported to suppress tumor growth and metastasis in osteosarcoma [24]. In this study, we focused on the epigenetic changes and mechanisms of NKD2 in human gastric carcinogenesis. 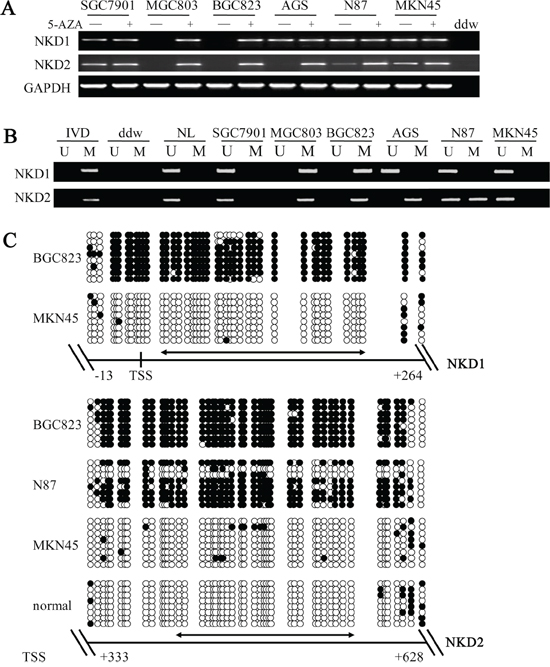 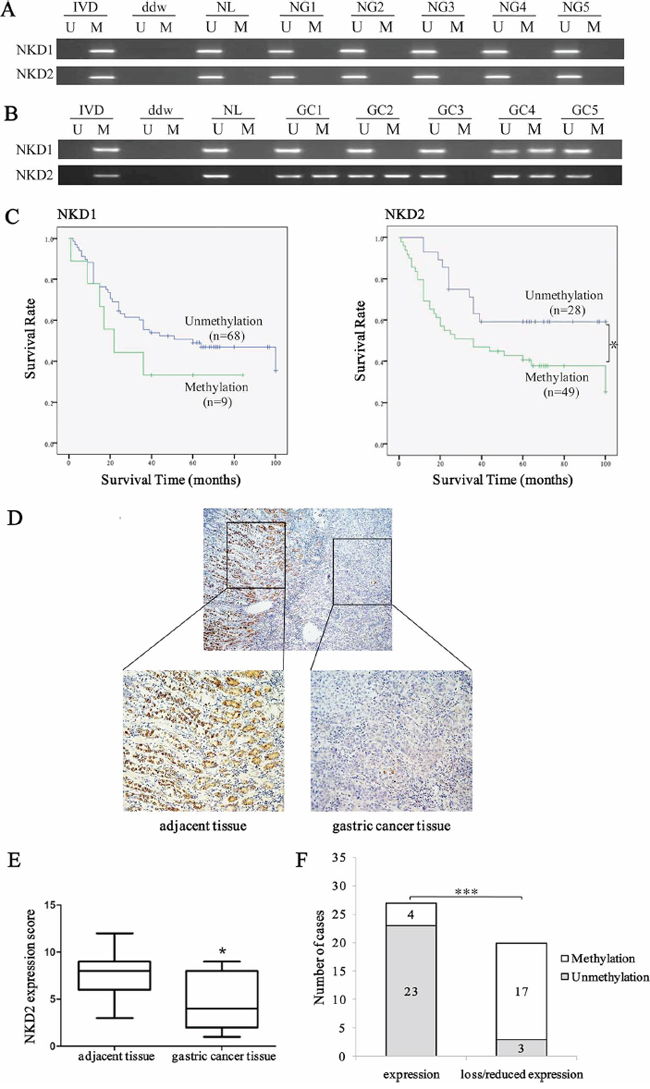 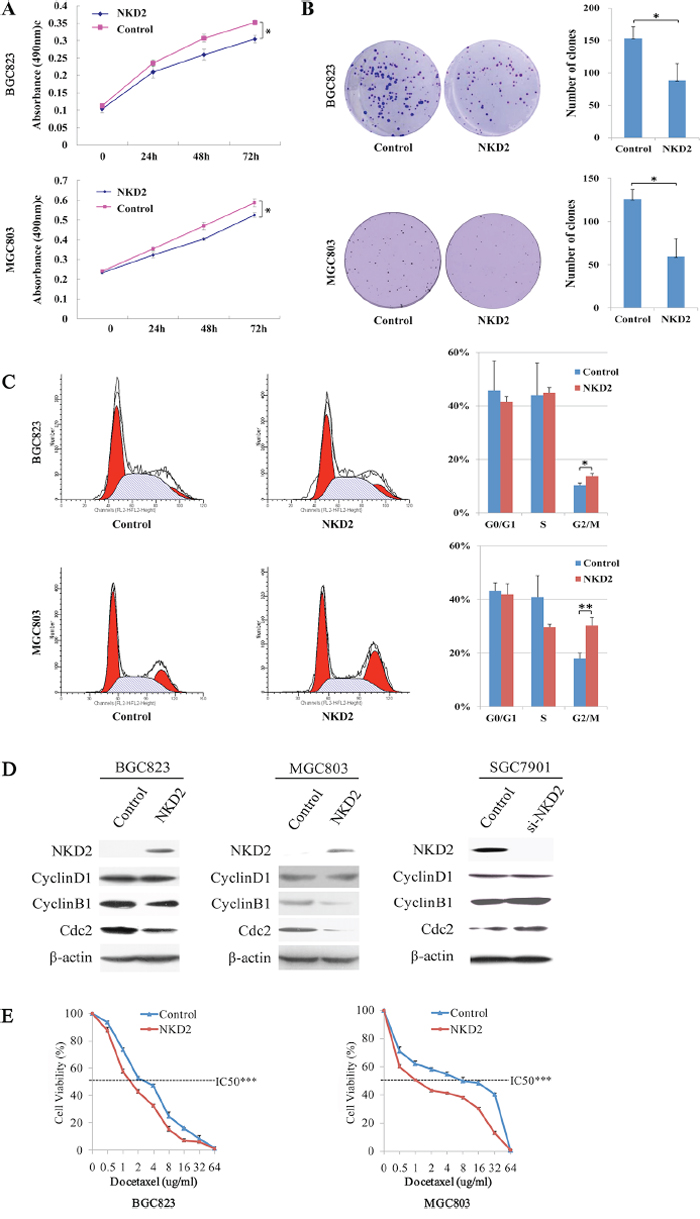 Docetaxel, a microtubule inhibitor, exerts its effects on the G2/M checkpoint. To determine whether NKD2 is involved in docetaxel sensitivity, we examined the cell viability of NKD2 unexpressed and re-expressed BGC823 and MGC803 cells after docetaxel treatment. The correlation of cell viability and docetaxel concentration was shown in Figure 3E. The IC50 of docetaxel was 3.019 ± 0.093 vs. 1.761 ± 0.054 ug/ml (P < 0.001) in BGC823 cells and 5.099 ± 0.339 vs. 1.433 ± 0.068 ug/ml (P < 0.001) in MGC803 cells before and after restoration of NKD2 expression. These results indicate that NKD2 functions as a mitotic inhibitor in human gastric cancer cells and sensitizes these cells to docetaxel. 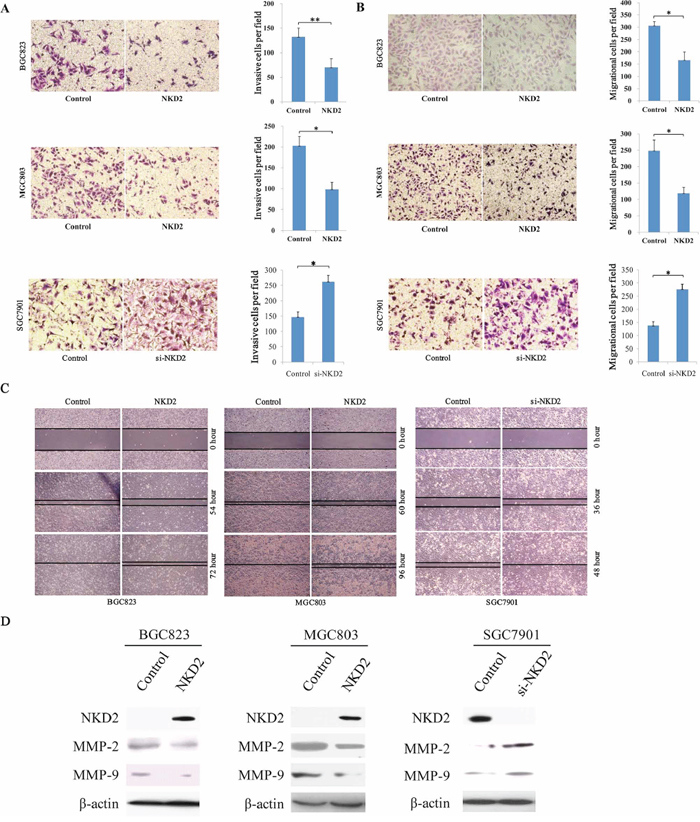 The wound healing assay was also employed to measure the cell migration ability. As shown in Figure 4C, the migration of BGC823 and MGC803 cells was apparently suppressed after re-expression of NKD2. And the migration ability of SGC7901 cells was promoted by knocking down NKD2. To further validate the effect of NKD2, the expression levels of MMP-2 and MMP-9 were detected by western blot. As shown in Figure 4D, the expression levels of MMP-2 and MMP-9 were reduced after re-expression of NKD2 in BGC823 and MGC803 cells. The inhibitory role of NKD2 in MMP-2 and MMP-9 expression was further validated by the knocking down of NKD2 in SGC7901 cells. These results demonstrate that NKD2 suppresses gastric cancer cell invasion and migration.

NKD2 has been shown to negatively regulate canonical Wnt signaling through an interaction with Dishevelled. To explore the mechanism of NKD2 in gastric cancer, a Topflash reporter and TCF/LEF luciferase reporter assay were used in BGC823 cells. As shown in Figure 6A, relative luciferase activity was not changed after co-transfection of NKD2 with wild type or mutant type of β-catenin in BGC823 cells (P > 0.05) These data suggest that the activity of the TCF/LEF reporter was not affected by NKD2. The expression of Dvl-2, the NKD2 binding protein, was not changed before and after re-expression of NKD2 in BGC823 and MGC803 cells. No obvious Dvl-2 expression changes were found in SGC7901 cells before and after the knockdown of NKD2 (Figure 6E). These results demonstrate that NKD2 does not directly inhibit canonical Wnt signaling. 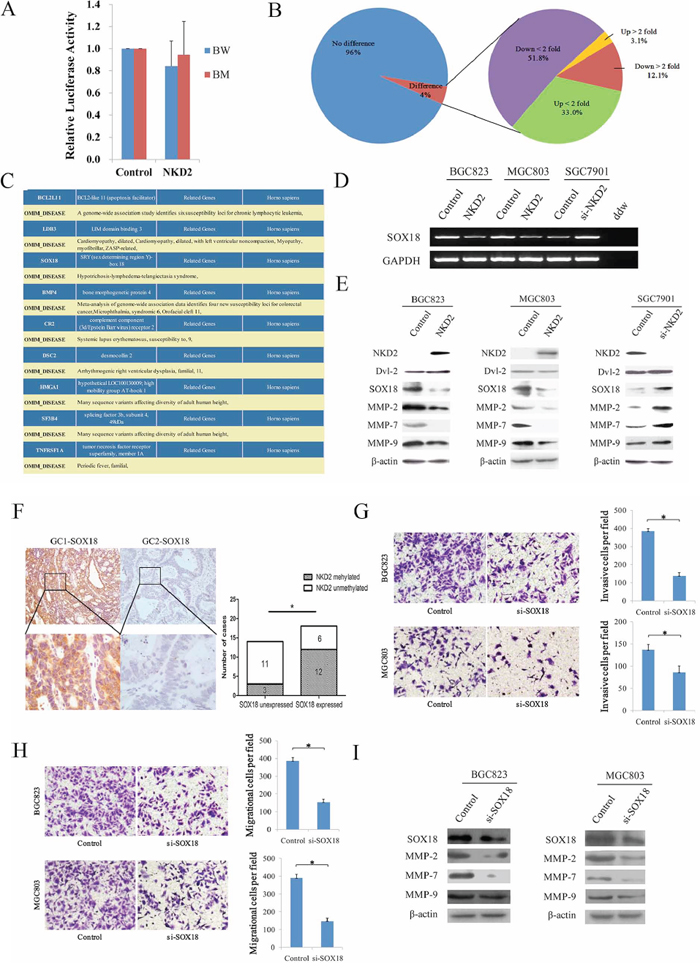 To further understand the mechanisms of NKD2 in gastric cancer progression, a gene expression array was employed. The gene expression profile was analyzed in NKD2 re-expressed and unexpressed BGC823 cells. Among a total of 31741 genes, expression changes were found in 1376 genes (P < 0.05). Among these genes, 43 genes were up-regulated and 167 genes were down-regulated more than 2-fold (Figure 6B). DAVID software (http://david.abcc.ncifcrf.gov/home.jsp) was employed to obtain the disease related genes. Among these apparently changed genes, BCL2L11, LDB3, SOX18, BMP4, CR2, DSC2, HMGA1, SF3B4 and TNFRSF1A were regarded as disease-related genes according to DAVID (Figure 6C). SOX18 was validated to be down-regulated by semi-quantitative RT-PCR in NKD2 re-expressed BCG823 and MGC803 cells, and up-regulation of SOX18 was verified by the knocking down NKD2 in SGC7901 cells (Figure 6D). These results suggest that SOX18 is down-regulated by NKD2 in human gastric cancer.

Total RNA was isolated by Trizol reagent (Life Technologies, Gaithersburg, MD). First strand cDNA was synthesized according to the manufacturer’s instructions (Invitrogen, Carlsbad, CA). PCR primers for NKD1 and NKD2 are listed in Supplementary Table S1. The primer sets for NKD1 and NKD2 were designed to span intronic sequences between adjacent exons in order to control for genomic DNA contamination. RT-PCR was amplified for 33 cycles. GAPDH was used as an internal control.

DNA was prepared by the proteinase K method. Bisulfite treatment was carried out as previously described [31]. MSP primers were designed according to genomic sequences around transcription start sites (TSS) and synthesized to detect unmethylated (U) and methylated (M) alleles. Bisulfite sequencing (BSSQ) was performed as previously described [32]. BSSQ products were amplified by primers flanking the targeted regions including MSP products. All primers are listed in Supplementary Table S1.

Cells were plated into 96-well plates at 2 × 103 cells/well, and the cell viability was measured by the MTT assay (KeyGEN Biotech, Nanjing, China) at 0, 24, 48 and 72 h. Absorbance was measured on a microplate reader (Thermo Multiskan MK3, MA, USA) at a wavelength of 490 nm.

NKD2 unexpressed and re-expressed BGC823 and MGC803 cells were seeded at 500 cells/well in 6-well plates in triplicate. Growth medium conditioned with G418 (Invitrogen, Carlsbad, CA) at 450 μg/ml was exchanged every 24 hours. Clones were counted 14 days after being fixed with 75% ethanol and stained with 0.2% crystal violet (Beyotime, Nanjing, China) for visualization and counting.

Cells were starved 12 hours for synchronization, and the cells were re-stimulated with 10% FBS for 24 hours. Cells were fixed with 70% ethanol and treated using the Cell Cycle Detection Kit (KeyGenBiotech, Nanjing, China). The cells were then sorted by a FACS Caliber flow cytometer (BD Biosciences, Mansfield, CA). The cell phase distribution was analyzed by the Modfit software (Verity Software House, ME, USA).

Creation of a linear scratch wound was performed using a pipette tip in a confluent monolayer of cells in 6-well plates. Medium without FBS was used in order to inhibit cell proliferation.

Selected siRNAs targeting NKD2, siRNAs targeting SOX18 and the RNAi negative control duplex were used in this study. The sequences of the siRNAs are listed in Supplementary Table S1. The RNAi oligonucleotide and RNAi negative control duplex were transfected into NKD2 highly expressing SGC7901 cells or SOX18 expressing BGC823 cells and MGC803 cells.

NKD2 re-expressed or unexpressed BGC823 cells (2 × 106) were suspended in 0.1 ml PBS and injected subcutaneously into the right armpit of each 4-week-old female Balb/c nude mouse (6 per group). The diameter of the tumors was measured every 3 days. Tumor volume (mm3) was estimated by the following formula: tumor volume = (length) × (width)2/2. Mice were sacrificed at 24 days, and tumor size and weight were measured after dissection. All procedures were approved by the Animal Ethics Committee of the Chinese PLA General Hospital.

SPSS 17.0 software (IBM, NY, USA) was used for data analysis. The student’s t test, the Pearson chi-squared test, the Fisher’s exact test and the log-rank test (Kaplan-Meier) and COX regression analysis were used in this study. P < 0.05 was regarded as a statistically significant difference.

James G. Herman is a consultant to MDxHealth. The other authors declare no conflict of interest.

11. Tamura G. Alterations of tumor suppressor and tumor-related genes in the development and progression of gastric cancer. World J Gastroenterol. 2006; 12:192–198.