Comparison of survival and clinicopathologic features in colorectal cancer among African American, Caucasian, and Chinese patients treated in the United States: Results from the surveillance epidemiology and end results (SEER) database

Colorectal cancer (CRC) is among the leading causes of cancer related deaths all over the world [1]. The survival of CRC patients differs according to race in the United States. Several studies have shown elevated CRC mortality rate and shorter survival for African Americans compared with Caucasians patients [2, 3]. CRC was also one of the most common cancers in Chinese population. It was reported to have 310,244 newly diagnosed CRC patients in China in 2011 [4]. There were few reports about the survival differences among African American, Caucasian and Chinese CRC patients. In 2012, Hashiguchi Y et al. reported the impact of race/ ethnicity on prognosis of colon cancer patients [5]. They showed that East Asian American patients (including Chinese patients) had significantly better prognosis, and African American patients had worse prognosis than non-Hispanic white patients [5]. However, they only analyzed colon cancer patients who had underwent surgery. We are not aware of any other reports comparing African American, Caucasian, and Chinese CRC Patients.

It is hard to get a convincing conclusion if we compare these three groups of patients using different databases. The Surveillance Epidemiology and End Results (SEER) Database (http://seer. cancer.gov/data/citation.html), a report on the most recent cancer incidence, mortality, survival, prevalence, and lifetime risk statistics, is published annually by the Data Analysis and Interpretation Branch of the National Cancer Institute, USA. It provides various race/ethnicities (including white, black and Chinese) with a large sample size in the United States, moreover it contains no identifiers and is therefore a good database for our study.

In this study, we used data from the SEER cancer-registry program of individuals diagnosed with CRC from 1973 to 2012 to compare the survival and clinicopathologic features among African American, Caucasian, and Chinese Patients.

P1: The comparison between Caucasian and Chinese patients

P2: The comparison between Caucasian and African-American patients

P3: The comparison between Chinese and African-American patients 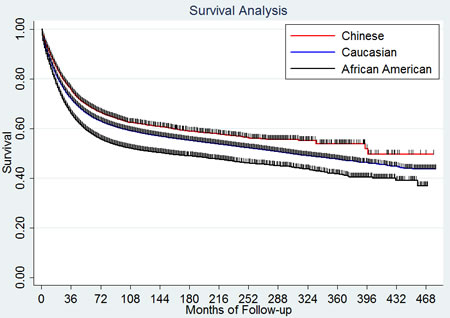 Variables showing a trend for association with survival (P < 0.05) were selected in the cox proportional hazards model. Sex, age, race/ethnicity, married status, tumor site, TNM stage, histologic subtypes, grade, insurance status as well as the time of diagnosis were all independent prognostic factors in the multivariable analysis. The HR for race/ethnicity was 1.09, 95% confidence interval (CI): 1.05-1.13 (Table 3), P < 0.001. Compared for Caucasian patients, the hazard ratio (HR) for Chinese patients was 0.86 and 1.22 for African American.

Previous studies had showed that despite improvements in treatment, racial disparities persisted in CRC incidence, mortality and survival [6-8]. African Americans were reported to have higher incidence rates and lower survival rates for CRC than Caucasian in the United States [2, 3, 9, 10]. According to the Global Cancer Statistics, the incidence of CRC is rising in East Asia including Hong Kong and Shanghai in China [4, 11]. To our best knowledge, this is the first population-based comparisons of CSS in CRC patients with these three race/ethnicities. In the present study, we used all the CRC adenocarcinoma patients for analysis and found that Chinese patients had a significantly better 5-year CSS than the other two races while African American patients had the worst prognosis. Compared with Caucasian patients, the risk of cancer related death was 14% lower in Chinese patients and 22% higher in African American patients. What caused the difference? Numerous reports have indicated that socioeconomic status seemed to be important in the poor prognosis of African American patients [9, 12]. While, other studies suggested that biological factors might be responsible for the poor survival in African American patients [3]. In the present study, we also made a comparison of clinicopathologic features among these three groups. Some of the differences may explain the survival disparity.

We classified the basic characteristics in Table 1 into two groups: socioeconomic factors (including married status, insurance status, income, residence and time of diagnosis) and biologic factors (including age, sex, site, TNM stage, histologic subgroup and grade). As for the socioeconomic factors, we found that the insurance coverage rate, income and urban residence was lowest in the African American patients, moreover, Chinese patients had the highest percentage of married, while African American patients ranked lowest. The insurance status would affect the treatment and furthermore cause a difference in survival [13, 14]. Previous study showed that marital status was an independent prognostic factor for survival in CRC patients [15, 16]. More in detail, unmarried patients were at greater risk of cancer specific mortality [15]. In the present study, we also found that married patients had a better CSS compared with the other subgroups of married status patients. Insured patients also had a better CSS than uninsured patients. It seemed that socioeconomic status might account for the difference in prognosis among these three race/ethnicities.

More and more evidence suggested that primary colon and rectal tumors should no longer be considered as a single disease entity [19-21]. Previous reports had described differences in biology and outcome based on whether the primary was right or left sided [22, 23]. Poor prognosis of right-sided primary was consistently observed compared with those with a left-sided primary [21, 24]. Our data also showed that left side colon patients had a significantly better 5-year CSS compared with right side and rectum cancer patients. Moreover Chinese patients had a highest proportion of left colon cancer among these three race/ethnicities.

However, we also found some controversial phenomenon. African-America CRC patients were diagnosed at a younger age while young patients were supposed to have a better survival. Moreover, African American CRC patients had higher proportion of well differentiated and lower proportion of undifferentiated tumors than Chinese patients, but they still had a poorer survival than Chinese patients. The multivariate analysis confirmed that these clinicopathologic factors analyzed above were all independent prognostic factors. Until now, we still have no idea how these factors work together and how much they predict outcome. It is likely that biological differences as well as socioeconomic status both contributed to the survival disparity among the different race/ethnicities.

We realized there were some limitations of our analysis. Although this was a population-based registry and we had a large sample size, we were unable to include some other known prognostic factors into analysis such as chemotherapy use, smoking status and aspirin usage, since the database does not have these information. Moreover, not all the patients enrolled for analysis had the full information of all the clinical features. Finally, the genetic difference among these three race/ethnicities are also out of our reach.

For the insurance status, individuals in the “Any Medicaid”, “Insured” and “Insured/No specifics” groups were clustered together as “Insured group”. For the married status, we combined the “Separated” and “Divorced” as “separated / divorced” group, and combined the “Single” and “Unmarried or Domestic Partner” and “Single” group.

The study population was based on the SEER cancer registry. Left colon, right colon as well as rectum adenocarcinoma patients with a race/ethnicity of white, black or Chinese from 1973 through 2012 were eligible for the study. Patients were excluded if they had more than one primary cancer but the CRC wasn’t the first one, had unknown cause of death or unknown survival months.

The patients’ demographic and tumor characteristics were summarized with descriptive statistics (Table or Figure). Comparisons of categorical variables among these three race/ethnicity populations were performed using the Chi square test, and continuous variables were compared using Student’s t test. The primary endpoint of this study was 5-year CSS, which was calculated from the date of diagnosis to the date of cancer specific death. Deaths attributed to CRC were treated as events and deaths from other causes were treated as censored observations. Survival function estimation and comparison among African American, Caucasian and Chinese were performed using Kaplan-Meier estimates and the log-rank test. The independence of the prognostic effect of race/ethnicity was evaluated by adjusting for other known factors including age at diagnosis and tumor stage. The multivariate Cox proportional hazard model was used to evaluate the HR and the 95 % CI for all the known prognostic factors. All of statistical analyses were performed using the Intercooled Stata 13.0 (Stata Corporation, College Station, TX). Statistical significance was set at two-sided P < 0.05.

We would like to thank the staff members of the National Cancer Institute and their colleagues across the United States and at Information Management Services, Inc., who have been involved with the Surveillance, Epidemiology and End Results (SEER) Program.

This work was supported by:

All authors declared that there is no conflict of interest.