Multiple sclerosis (MS) is a complex disease with an unknown etiology and has no effective medications despite extensive research. Antioxidants suppress oxidative damages which are implicated in the pathogenesis of MS. In this study, we showed that the expression of an antioxidant protein peroxiredoxin 6 (PRDX6) is markedly increased in spinal cord of mice with experimental autoimmune encephalomyelitis (EAE) compared to other PRDXs. PRDX6 transgenic (Tg) mice displayed a significant decrease in clinical severity and attenuated demyelination in EAE compared to wide type mice. The increased PRDX6 expression in astrocytes of EAE mice and MS patients reduced MMP9 expression, fibrinogen leakage, chemokines, and free radical stress, leading to reduction in blood-brain-barrier (BBB) disruption, peripheral immune cell infiltration, and neuroinflammation. Together, these findings suggest that PRDX6 expression may represent a therapeutic way to restrict inflammation in the central nervous system and potentiate oligodendrocyte survival, and suggest a new molecule for neuroprotective therapies in MS.

Multiple sclerosis (MS) is a chronic inflammatory disorder of the central nervous system (CNS) [1]. Its disease is characterized by immune cell infiltration, demyelination, axonal damages, and a reactive astrogliosis [2-3]. Experimental autoimmune encephalomyelitis (EAE) by injection of a myelin antigen, which is activated by myelin-specific T cells is the most widely accepted animal model to study MS [4]. Although the disease process is understood very well, the critical factors inducing the etiopathogenesis of MS remain largely unknown.

Oxidative stress plays an important role in the pathogenesis of EAE and MS [1, 5]. Many studies have been showed increased free radical levels in MS patients, and oxidative stress has been implicated as mediators of demyelination and axonal damage in both EAE and MS [6-7]. Oxidative stress is controlled by antioxidant proteins. peroxiredoxins (PRDXs) are newly discovered family of antioxidant enzymes [8]. Uniquely, PRDX6 has a single conserved cysteine residue (1-Cys PRDX), utilizes glutathione (GSH) as the physiological reductant, and removes cellular reactive oxygen species (ROS) and protect cells from ROS-induced cell damage and death [9]. PRDX6 was only expressed in astrocytes of mouse brain among the six mammalian PRDXs (PRDX1 - 6) [10], and it also was reported to be elevated in reactive astrocytes of human PD patients and dementia patient brains [11], and implying unique roles of PRDX6 in astrocytes. However, the potential roles of PRDX6 on MS have not yet been studied.

In the present study, we investigated the role of PRDX6 using MS patient samples and EAE-generated mice. Our study provides that PRDX6 has pathophysiological functions in inflammatory progression of MS.

In order to investigate a potential relevance of PRDXs in MS, we first examined the expression of PRDXs in spinal cord. Except for PRDX4, PRDXs were expressed in mouse spinal cord (Figure 1A). After EAE induction for 28 days (Figure 1B), DNA microarray and RT-PCR were carried out in the spinal cord of animals (Figure 1C, S1_Table, and S1_Dataset 1). As shown in Figure 1C, S1_Table, and S1_Dataset 1, the mice sensitized with MOG35-55 peptides showed a marked increase in PRDX6 mRNA level in the spinal cord compared with control mice. We quantitatively validated the drastically increased mRNA level of PRDX6 compared to other PRDXs using quantitative real-time polymerase chain reaction (PCR) (Figure 1D). It is also confirmed the expression of PRDX6 in the spinal cord (S1-Figure). PRDX6 was strongly expressed on cells with astrocyte-like morphology in both EAE (Figure 1E) and human MS lesions (Figure 1F). These data imply that the up-regulation of the antioxidant PRDX6 may be a critical role in the progression of MS. 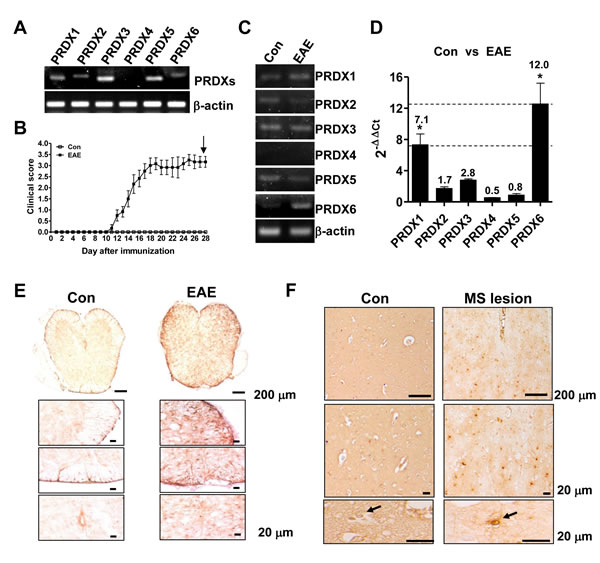 PRDX6 suppresses the clinical severity and neuropathology of EAE 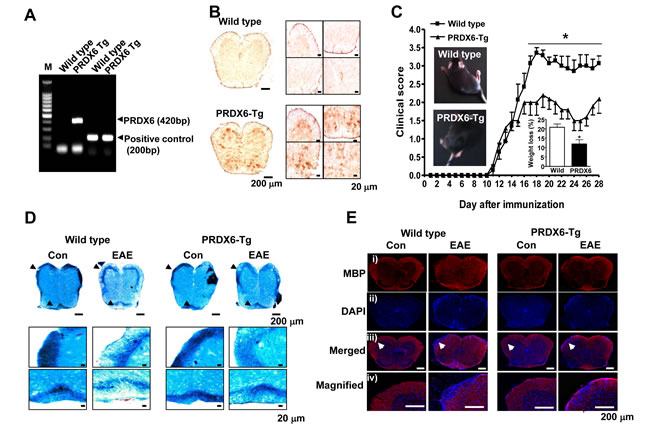 Figure 2: Transgenic (Tg) mice expressing PRDX6 are protected from EAE. A. Ggenotyping was performed to analyze the existence of PRDX6 gene in transgenic mice, as described in Materials and Methods. B. The protein expression of PRDX6 was detected in the spinal cord of PRDX6 Tg mice and wild type mice using immunohistochemistry. C. Wild type and PRDX6 Tg mice were sensitized to MOG35-55, as described in Materials and Methods. Mice developed clinical signs of EAE starting at 11 days, characterized by an ascending flaccid paralysis, and were scored with widely used 5 point paradigm during 28 days once a day, as described in Materials and Methods. Inset, Representative picture of paralyzed mice and body weight loss were displayed in peak clinical scores. D., E. Sections of spinal cord were stained with luxol fast blue solution after 28 days of EAE induction with MOG35-55 peptide D.. After sections of spinal cord were permeabilized, MBP (i; red) was immunostained with mouse anti-MBP antibody followed by Alexa-Fluor 568-conjugated secondary antibodies, and then sections were stained with DAPI (ii; blue). The bottom panels (iii, iv) show the merged images of the first (i) and second (ii) panels. iv panels show magnified image indicated with arrow in iii panels. Representative stainings from three independent experiments are shown. All values are presented as the mean ± SEM. *Significant difference between wild type mice and PRDX6 Tg mice sensitized with MOG35-55 peptide (*P < 0.05).

Up-regulation of PRDX6 in astrocytes of EAE and MS lesions, and blood-brain-barrier disruption 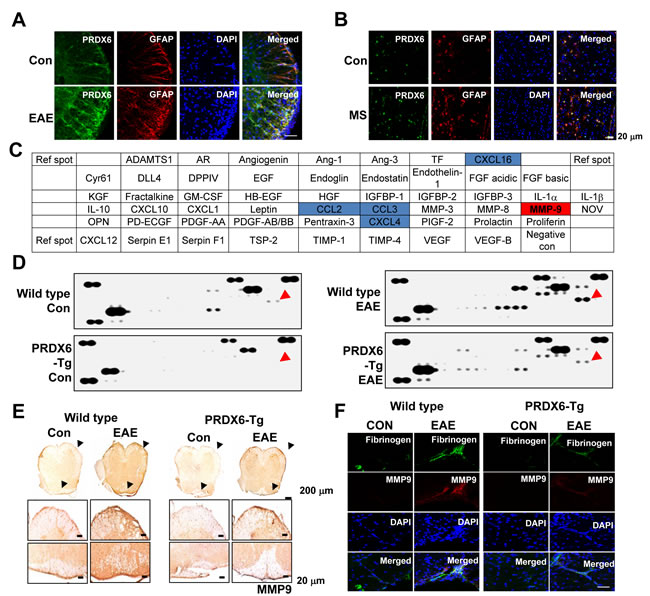 Table 1: Regulation of PRDX6, BBB, and chemokines by EAE induction in PRDX6-Tg mice 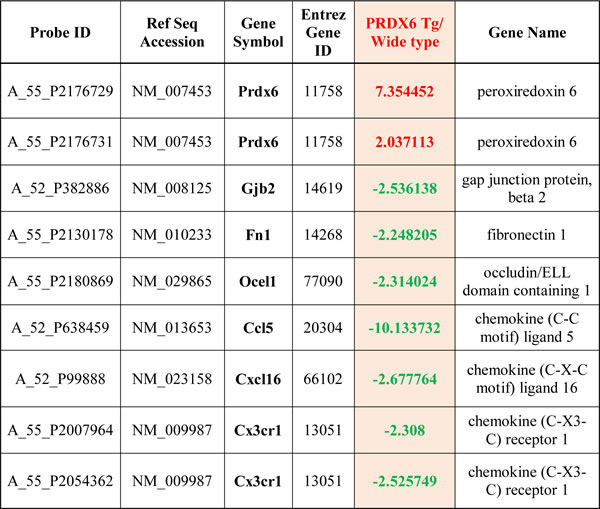 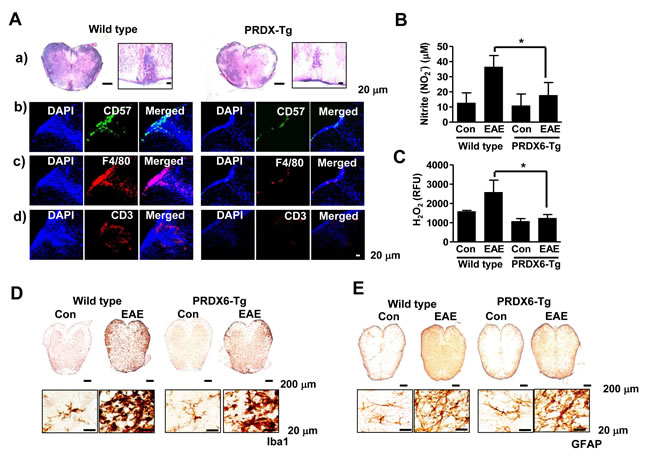 Figure 4: PRDX6 attenuates immune cell infiltration and neuroinflammation in EAE. A., B. Spinal cord sections were incubated with specific antibodies against GFAP A. and Iba1 B. proteins and then were detected by immunohistochemistry. C. Images show hematoxylin and eosin (H&E) staining of the spinal cord of PRDX6 Tg (right) and wild type mice (left) at 28 days after immunization with MOG35-55 peptide A.. CD57 (b, green), F4/80 (c, red), and CD3 (d, red) was immunostained in PRDX6 Tg mice (right) and wild type mice (left) spinal cord, and then sections were stained with DAPI (blue). The last panels show the merged images of the first and second panels. D., E. Nitric oxide (NO) levels D. and reactive oxygen species (ROS) levels E. were determined using NO detection kit and ROS detection kit, respectively. All values are presented as the mean ± SEM. *Significant difference between wild type mice mice and PRDX6 Tg mice that were sensitized with MOG35-55 peptide (*P < 0.05). Representative data from three independent experiments are shown.

Reactive astrocytes are one of the earliest histopathological signs in MS lesions [12]. Astrocytes increased inducible nitric oxide synthase expression, and produce highly damaging reactive oxygen and nitrogen species[13-14]. In the present study, generation of ROS and NO was induced following EAE, while PRDX6 decreased the generation of ROS and NO in the spinal cord. We also found that PRDX6 was significantly increased in reactive astrocytes under EAE. High levels of NO and superoxide have all been reported in patients with MS [15]. Their excessive amounts are noxious to cause cellular damage and cell metabolism such as apoptosis [16]. Although Holley et al. showed that PRDX5 is prominently expressed in astrocytes of acute, subacute and chronic lesions of multiple sclerosis patients [17], our data demonstrated that PRDX5 expression in EAE is consistent with normal condition. Thus, our data suggest that the upregulation of PRDX6 in reactive astrocytes inhibits EAE via reduction of ROS and NO.

BBB disruption and extravasation of immune cells into the brain parenchyma are the earliest steps in the pathogenesis of MS [18-19] and MMP9 is the most important in promoting BBB disruption among the various MMPs associated with CNS inflammation [20]. In the present study, we detected peripheral immune cell infiltration into the spinal cord, the activation of microglia, and MMP9 and the blood protein fibrinogen leakage which are involved in BBB disruption and immune cell infiltration. The inhibition of MMP9 improved the clinical condition by blocking the BBB injury [21], and suppressed inflammatory reactions in activated microglia [22]. Konnecke et al demonstrated that microglia is main sources of MMP9 in neuroinflammation [23]. Similarly, we also demonstrated that upregulation of PRDX6 decreased MMP9 expression and fibrinogen leakage with reduction of immune cell infiltration and microglia activation during EAE. Therefore, the upregulation of PRDX6 in astrocytes inhibits microglial activation, MMP9 expression, and the prevent BBB breakdown and immune cell infiltration, leading to protection from the damage of the spinal cord by EAE.

Several studies have indicated that astrocytes increase secretion of anti-inflammatory cytokines and scavengers of ROS, as well as the suppression of microglial activation is caused by astrocyte induced anti-inflammatory function [3, 24-26]. These studies also support our idea for neuroprotective effects of astrocytic PRDX6 as a critical factor in EAE mouse model and MS lesion. In conclusion, our findings strongly support that upregulation of astrocytic PRDX6 has an important role in orchestrating myelin destruction via microglial activation, BBB breakdown, and immune cell infiltration, resulting in demyelination and axonal loss in MS, as well as our data provide the concept that PRDX6 gives rise to great potential in prevention and treatment of MS.

All animal experiments were approved and carried out according to the Guide for the Care and Use of Animals [Chungbuk National University Animal Care Committee, Korea (CBNUA-045-0902-01)].

Immnohistochemistry (IHC) and immunofluorescence (IF)

The spinal cord was cut into 18 µm coronal sections with a freezing microtome (Thermo Scientific, Germany) and stored in cryoprotectant solution at −20 °C. The sections or MS patient sections (Gentex, Zeeland, MI) were subject to immunostainings. Briefly, Endogenous peroxidase activity was quenched, and the sections were blocked for 30 min with 3% normal horse/goat serum diluted in PBS. These sections were incubated with specific primary antibody for overnight. After washing in PBS, the sections were incubated in biotinylated goat anti-mouse/rabbit IgG antibody (1:1000 dilution, Vector Laboratories, Burlingame, CA, USA) for 1 h at room temperature. The sections were subsequently washed and incubated with avidin-conjugated peroxidase complex (ABC kit, 1:200 dilution, Vector Laboratories, Burlingame, CA, USA) for 30 min followed by PBS washing. The peroxidase reaction was performed in PBS using 3, 3’-diaminobenzidine tetrahydrochloride (DAB, 0.02%). Sections were dehydrated in ethanol, cleared in xylene, and mounted with Permount (Fisher Scientific), and evaluated on a light microscopy (Olympus, Tokyo, Japan).

Sections were for stained with H&E for routine histological analysis of inflammatory infiltration and with Luxol fast blue stain kits (IHC WORLD, LLC., Woodstock, MD) for evaluation of demyelination.

The spinal cord tissues were excised and homogenized in PBS with protease inhibitor cocktail (Sigma-Aldrich, USA) and Triton X-100 (final concentration 1%). 300 µg of proteins collected from three samples per group was used for Proteome ProfilerTM Antibody Arrays according to the protocol provided by supplier (#ARY015, R&D Systems, USA).

100 µl of the spinal cord tissues was mixed with an equal volume of Griess reagent [0.1% N-(1-naphthyl)- ethylenediamine, 1% sulfanilamide in 5% phosphoric acid] (Sigma) and incubated at room temperature for 10 min. The absorbance at 540 nm was measured in an automated microplate reader (Molecular Decices), and a series of known concentrations of sodium nitrite was used as a standard.

The data were analyzed using the GraphPad Prism version 4 program (GraphPad Software, Inc., San Diego, CA). Data are presented as mean ± SEM. Statistical significance was performed on the data using one-way analysis of variance (ANOVA) or unpaired Student’s t test. A value of P < 0.05 was considered to be statistically significant.

5. Gilgun-Sherki Y, Melamed E and Offen D. The role of oxidative stress in the pathogenesis of multiple sclerosis: the need for effective antioxidant therapy. J Neurol. 2004; 251:261-268.

23. Konnecke H and Bechmann I. The role of microglia and matrix metalloproteinases involvement in neuroinflammation and gliomas. Clin Dev Immunol. 2013; 2013:914104.

24. Buffo A, Rolando C and Ceruti S. Astrocytes in the damaged brain: molecular and cellular insights into their reactive response and healing potential. Biochem Pharmacol. 2010; 79:77-89.