MicroRNAs (miRNAs) are 21–23 nucleotide RNA molecules that modulate the stability or translational efficiency of target messenger RNAs [1, 2]. The biogenesis of miRNAs begins with a primary transcript, termed the pri-miRNA, and the combined action of Drosha and Dicer ribonucleases generates the mature miRNA species [3]. miRNAs binding to 3′-untranslated region (UTR) of the targeted mRNA leads to its degradation or translational repression [4]. miRNAs regulate a variety of biological processes, including cellular differentiation, proliferation, metabolic signaling, and apoptosis [4]. Differential expression of miRNAs between normal and tumor tissues has been observed in various cancer types, suggesting a possible link between miRNA expression and the development of cancer [5]. Deregulated miRNAs may function as tumor suppressors such as miR-205 and let-7 [6, 7], or oncogenes such as miR-17–92 cluster and miR-214 [8, 9], depending on the regulated targets. Therefore, we proposed that deregulation of candidate miRNAs could be a possible mechanism for the downregulation of tumor suppressors in tumors.

The Runt family of transcription factors consists of three members, RUNX1, RUNX2, and RUNX3. All three RUNXs play important roles in both the normal developmental process and carcinogenesis [10]. RUNX3 is related to neurogenesis of the dorsal root ganglia, T-cell differentiation, and tumorigenesis of the gastric epithelium. Primary gastric cancer specimens express lower levels of RUNX3 due to a combination of a hemizygous deletion and hypermethylation of the RUNX3 promoter region [10]. The gastric epithelium of Runx3 knockout mice exhibits hyperplasia, a reduced rate of apoptosis, and reduced sensitivity to TGF-β, suggesting that RUNX3 tumor suppressor operates downstream of the TGF-β signaling pathway. TGF-β receptors and their downstream signal transducers, SMADs, are frequently inactivated in various cancers [11]. RUNX3 cooperates with SMAD3/4 to activate TGF-β-dependent growth inhibition and apoptosis by induction of p21 and Bim, respectively [12, 13]. Functional inactivation of RUNX3, through hypermethylation of its promoter region, hemizygous deletion, epigenetic silencing, or cytoplasmic mislocalization, is frequently observed in solid tumors of diverse origins. Runx3 targeted deletion in mouse lung resulted in lung adenomas and abrogated the cellular defense mechanism against oncogenic activation, suggesting that Runx3 plays critical roles in normal differentiation and suppression of tumor initiation [14]. Hypoxia, often found in solid tumors larger than 1 mm3, as well as in pathophysiolocial premalignant conditions [15], downregulates RUNX3 by promoter histone deacetylation and methylation in gastric cancer cells [16], suggesting that histone modification plays a role in RUNX3 inactivation in early tumorigenesis and tumor growth. Moreover, hypoxia-inducible factor-1α (HIF-1α), a key transcription factor that induces angiogenesis and tumor aggressiveness is destabilized by RUNX3 [17]. Together, these data indicate that RUNX3 inactivation is a major risk factor in early tumorigenesis and its inactivation contributes to tumor progression via increasing angiogenesis [10, 17–20]. In this study, we examined the combination effect of miRNA-130a and miRNA-495 targeting RUNX3 under hypoxic conditions in cell proliferation and angiogenesis in gastric cancer cells.

Identification of miRNAs that bind to RUNX3 3′-UTR, using microarray data and bioinformatics

We previously reported that hypoxia decreased RUNX3 mRNA expression by histone modifications [16]. However, in specific gastric cancer cells such as SNU5 and SNU484 cells, RUNX3 mRNA expression was not decreased, but its protein level was reduced under hypoxic conditions (Figure 1A). We then focused on regulation mechanism of RUNX3 protein expression by miRNAs at the post-transcriptional level. To identify possible miRNAs negatively regulating RUNX3 protein expression, we performed a bioinformatics analysis using the three algorithmic databases (DIANA, miRanda, and miRDB). We identified 11 potential miRNAs targeting RUNX3 mRNA 3′-UTR from these databases (Figure 1B). Moreover, we performed miRNA microarray analysis to identify hypoxia-induced miRNAs. After exposure of gastric cancer cells to hypoxia, the expression levels of a number of miRNAs were significantly changed (Figure 1C). Among the upregulated miRNAs under hypoxic conditions, we selected three miRNAs, miR-130a, miR-330-3p, and miR-495, which overlapped with the 11 miRNAs targeting RUNX3, from multiple algorithmic databases. 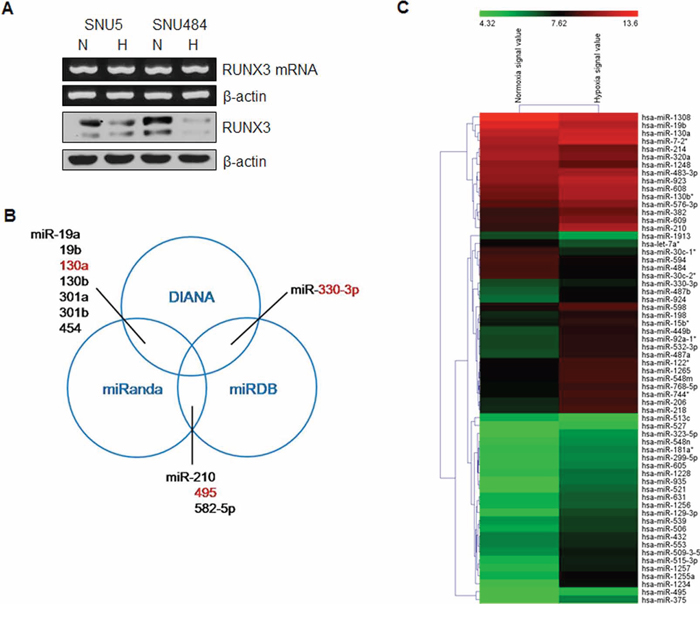 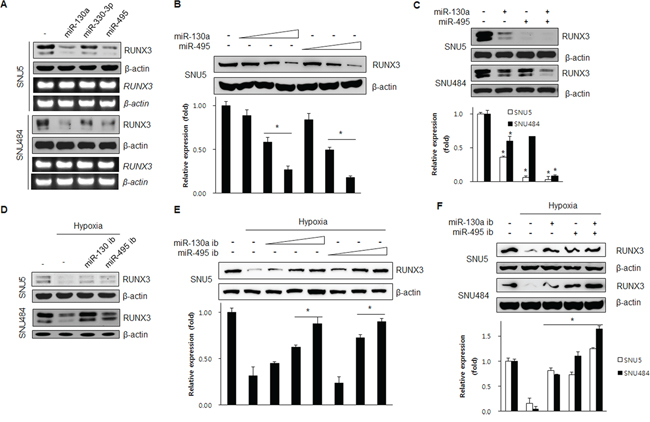 These results suggested that miR-130a and miR-495 downregulate RUNX3 protein expression at the post-transcriptional level under hypoxic conditions. 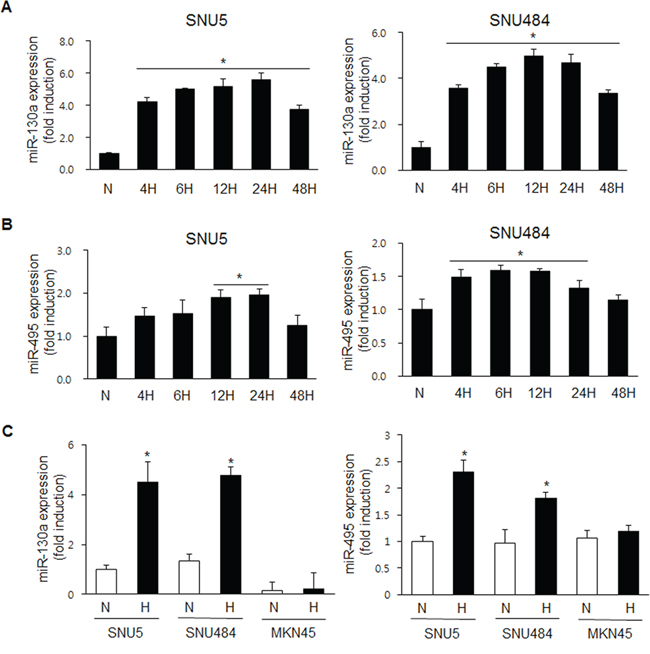 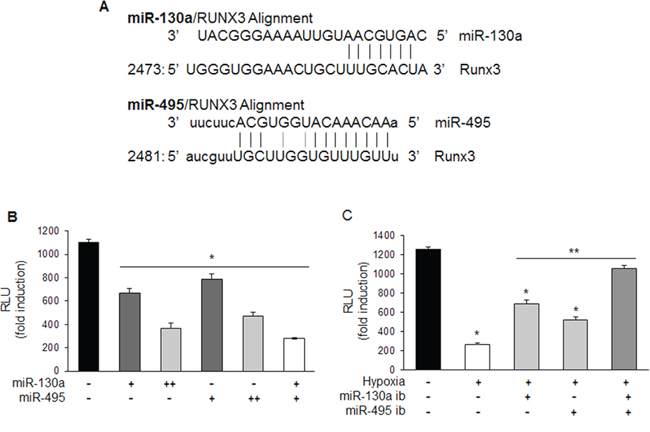 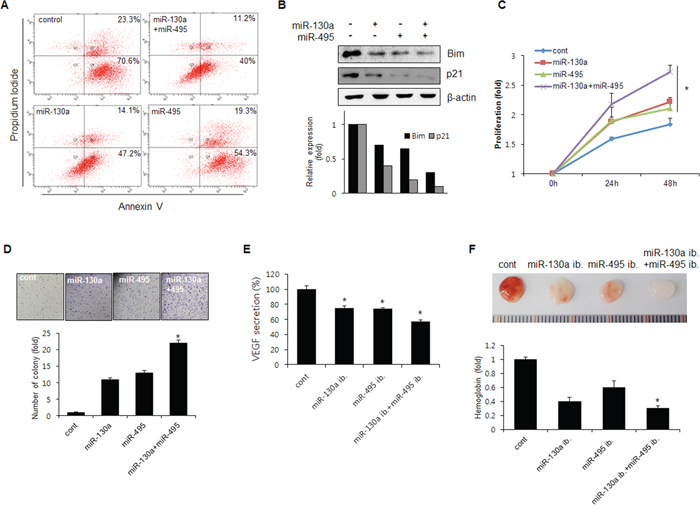 Mature miRNAs are 21 to 23 nucleotide noncoding RNA molecules that can downregulate the expression of various genes by translational repression [4]. This occurs when complementary sequences are present in the 3′-UTR of the target mRNAs or by directing mRNA degradation [4]. miRNAs can be expressed in a tissue-specific manner and are considered to play important roles in cell proliferation, apoptosis, and differentiation during mammalian development [21]. Moreover, recent studies showed a relationship between miRNA expression patterns and the development of cancer [22] as well as downregulation of specific cancer-related genes [23].

We can suggest that the potential mechanism of miR-130a and miR-495 to target RUNX3 is inhibition of mRNA translation into protein rather than mRNA degradation as they did not changed RUNX3 mRNA expression level. The results showed that miR-130a and miR-495 expression was increased in SNU5 and SNU484 cells under hypoxic conditions (Figure 3). Inhibition of miR-130a and miR-495 upregulated RUNX3 protein expression (Figure 2). miR-130a and miR-495 downregulate RUNX3 protein expression in gastric cancer cells. Runx3 targeted deletion in mouse lung resulted in lung adenomas and abrogated the cellular defense mechanism against oncogenic activation, suggesting that Runx3 plays critical roles in normal differentiation and suppression of tumor initiation [14]. In fact, our results showed that anchorage-independent colony formation and cell proliferation were significantly increased (Figure 5C and 5D). The inhibition of RUNX3 target genes, Bim and p21, cell cycle inhibitors, is a one of the mechanisms for the suppression of proliferation.

RUNX3 tumor suppressor function includes an anti-angiogenesis function. RUNX3 destabilizes HIF-1α by recruiting proline hydroxylases (PHDs) to the oxygen degradation domain to increase HIF-1α hydroxylation and proteosomal degradation [24]. These reports suggest that miR-130a and miR-495 play a role in cell cycle progression and angiogenesis in the early stage of tumorigenesis via the inhibition of RUNX3 expression.

In this study, we identified miR-130a and miR-495 as potential oncomiR candidates capable of targeting RUNX3, decreasing apoptosis, and increasing cell proliferation in gastric cancer cells. Furthermore, they enhanced cancer cell migration and tumor angiogenesis. These results indicated that therapeutics inhibiting miR-130a and miR-495 in SNU5 and SNU484 gastric cancer cells may reduce cell proliferation, migration, and angiogenesis in the early phase of gastric tumorigenesis via RUNX3 expression recovery.

The 3′-UTR of RUNX3 (310 bp), containing the putative miRNA binding sequence, was amplified using PCR from complementary synthesized from total RNA. The used primers, containing the XbaI restriction site, were as follows: forward, 5′-GCTCTAGAGCGGAAGCACGAGGAAAGGAAG-3′ and reverse, 5′-GCTCTAGAGCTCCTTCCACACATCTC AGAG-3′. The PCR product was cloned into the XbaI restriction site downstream of the open reading frame of luciferase in pGL3 control vector to generate the RUNX3 3′-UTR reporter.

First strand cDNA was synthesized from total RNA by using MMLV reverse transcriptase (Promega, Madison, WI, USA). The conditions for semiquantitative PCR were 35 cycles of denaturation (94°C/30 s), annealing (50°C/40 s), extension (72°C/40 s), and final extension (72°C/10 min). The primers used for RUNX3 were forward, 5′-GAGTTTCACCCTGACCATCACTGTG-3′, reverse, 5′-GCCCATCACTGGTCTT GAAGGTTGT-3′; and for β-actin, forward, 5′-GACTACCTCATGAAGATC-3′, reverse, 5′-GATCCACATCTGCTGGAA-3′. Real-time RT–PCR was performed in a 7500 Real-time PCR system (Applied Biosystems, Carlsbad, CA, USA) with SYBR premix Ex Taq (Takara Bio Inc., Otsu. Japan). Real-time RT–PCR was carried out with specific primers for miScript miR-130a, miR-495 primer assay kit (Qiagen) and β-actin. The PCR program consisted of an initial denaturation step at 95°C for 10 s, followed by 40 cycles of 95°C for 5 s and 60°C for 1 min. The expression level of each specific gene was normalized against the expression of β-actin in the same master reaction. The primers for miRNA-130a were #MS00003444 (Qiagen); for miRNA-495 were #MS00004347 (Qiagen); and for β-actin forward, 5′-GGATGTCCACGTCACACTTC-3′, and reverse, 5′-CACTCTTCCAGCCTTCCTTC-3′. Each experiment was performed in triplicate, and the average was calculated.

Proteins were separated by SDS-PAGE and transferred to a nitrocellulose membrane (Whatman, Maidstone, England). The membrane was blocked with 5% non-fat skim milk in Tris-buffered saline containing 0.1% Tween-20 for 1 h at room temperature. The membrane was then incubated with the primary antibody at 4°C overnight, followed by incubation with horseradish peroxidase-conjugated antibody mouse or rabbit immunoglobulins at room temperature for 1 h, and was developed by the West Pico Chemiluminescent Substrate (PIERCE, Woburn, MA, USA).

SNU484 cells were seeded in 96-well plates and transfected with miR-130a and miR-495 mimics for indicated time period. At the end of treatment, the cells were labeled with BrdU for 2 hours, and incorporated BrdU was quantified using a BrdU Cell Proliferation Assay Kit (Rhoche, Roche Diagnostics, Indianapolis, IN) according to the manufacturer’s instructions.

Conditioned medium from SNU484 cells transfected with miR-130a and miR-495 inhibitors (50 nM) were mixed with 200 μl matrigel (BD Biosciences) and inoculated subcutaneously into C57Bl/6J mice. After 7 days, the matrigel plugs were removed and photographed. The concentration of hemoglobin in the matrigel plugs was measured using the Drabkin reagent (Sigma, St. Louis, MO, USA) for quantification of blood vessel formation.

Cells were plated at a density of 5 × 105 in 60-mm dishes and incubated in DMEM supplemented with 1% fetal bovine serum (HyClone) for 12 h to synchronize the stage of cell cycle. Collected cells were incubated with annexin V and propidium iodide (PI) in 1× annexin V binding buffer for 30 min at 4°C in the dark and then analyzed on BD FACSAria flow cytometer (BD San Diego, CA, USA). Unstained and untreated cells were used as control.

ANOVA was performed to assess the significance of differences among the experimental groups. The level of significance was set at p < 0.01 or p < 0.05. Results are represented as the mean ± standard deviation.

No, there is no conflict of interest that I should disclose, having read the above statement.