On the presence and role of human gene-body DNA methylation

The ENCODE project has generated a rich collection of elements that associate with DNA sequences and have functional consequences for the way the genome is regulated. For this study, we made use of four datasets from the ENCODE project: 1) DNA methylation data generated by RRBS[26], 2) gene expression data generated from human exon microarrays[27, 28], 3) RNA polymerase II (Pol2) binding locations generated by ChIP-Seq [31, 33-36] and 4) the genomic locations of DNaseI hypersensitive sites (DHSS) generated by the digital DNaseI technique [32]. Additionally, we used a fifth dataset from the RIKEN Omics Science center made up of CAGE tags that characterize the 5’ ends of full-length transcripts [29]. All five of these datasets were available for three cell-lines (GM12878, K562 and HepG2), which together entail the primary focus of the study, and different subsets of the same five datasets were available in three additional cell-lines (HeLa-S3, H1hESC and HUVEC) (Table 1). These datasets were analyzed in various combinations across cell-lines in order to interrogate specific aspects of the relationship between DNA methylation, chromatin and gene expression.

Table 1: Genome-wide expression and chromatin datasets analyzed in this study

Figure 3: Relationship between DNA methylation and promoter activity levels. Percent DNA methylation levels are regressed against CAGE expression levels (i.e. promoter activity) for (A) intronic and (B) canonical 5’ gene promoters. Genes are grouped into 100 gene expression bins. Pearson correlation coefficient values (r) along with their significance values (P) are shown for each regression.

Figure 6: Relationship between chromatin environment and gene expression levels. (A) Pol2 occupancy and (B) density of DHSS sites are regressed against gene expression. Genes are grouped into 100 gene expression bins. Pearson correlation coefficient values (r) along with their significance values (P) are shown for each regression.

We show that levels of DNA methylation are more clearly related to the presence of transcribed regions than to the impetus to repress spurious intragenic transcription. However, the quantitative relationship between gene-body methylation and expression levels in non-monotonic and bell-shaped. On the other hand, the relationships between gene expression levels and Pol2 occupancy along with open chromatin are positive and monotonic. Considered together, these results link gene-body methylation to transcription and open chromatin, albeit in a complex and non-linear way. Here, we propose a specific model to explain the presence of gene-body DNA methylation in light of these results.

Our model rests on the notion that the deposition of DNA methylation is mechanistically facilitated, to some extent, by open and actively transcribed chromatin. In support of this contention, a biochemical study demonstrated that DNA methyltransferase 1 (DNMT1) interacts with Pol2 by binding the C-terminal repeat domain of Pol2 [39]. It has also been shown that the catalytic domain of DNMT1 needs to directly bind to DNA and to transit along the DNA molecule in order to function [40, 41]. Nevertheless, the bell-shaped relationship between gene-body methylation and expression levels indicates that open and actively transcribed chromatin does not completely determine gene-body methylation. On the contrary, there appears to be some trade-off between the openness of the chromatin and the levels of DNA methylation, and we also try to account for this in our model. 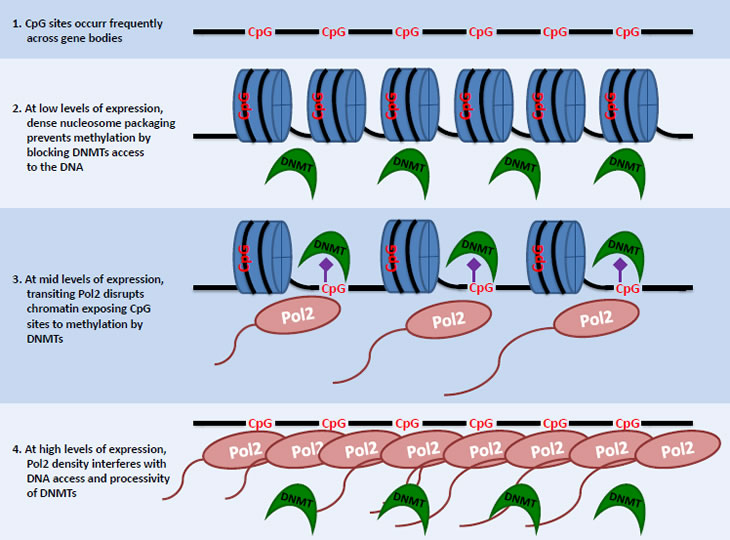 Gene annotations for the March 2006 build of the human genome reference sequence (NCBI build 36.1; UCSC hg18) were taken from the ‘RefSeq Genes’ track of the UCSC Genome Browser [42, 43]. Individual genes were defined as distinct genomic loci encompassing all overlapping RefSeq transcripts from the start of the 5’ most exon to the end of the 3’ most exon. A total of 32,128 RefSeq transcripts were merged into 19,539 genes that represent distinct gene loci.

Genome-wide DNA methylation data for the GM12878, K562, HepG2, HeLa-S3 and H1Hesc cell-lines were taken from the ‘ENCODE DNA methylation track’ of the UCSC Genome Browser (assembly hg19). Methylation data were generated using the Reduced Representation Bisulfite Sequencing (RRBS) technique [26] and cover approximately 1.26-1.47 million CpG sites in each of the five cell-lines. The RRBS methylation data are represented as percent methylation for each covered CpG site, and herein DNA methylation levels for any locus or genomic region were computed as the average percentage methylation of all cytosine residues covered therein.

Exon microarray data for six ENCODE cell-lines (GM12878, K562, HepG2, HeLa-S3, H1Hesc and HUVEC) were taken from the ‘ENCODE Exon Array’ track of the UCSC Genome Browser (assembly hg19) [19, 27-30]. The data were generated using the Affymetrix Human Exon 1.0 ST GeneChip and analyzed using Affymetrix ExACT 1.2.1 software with samples quantile normalized using the PM-GCBG background correction and PLIER (probe logarithmic intensity error) summary. Here, the log2 normalized average signal intensity of all exons mapping to an individual gene locus was taken to represent the overall expression of the gene. This resulted into a final set of 18,632 genes for which expression data was available in all cell-lines.

Cap Analysis of Gene Expression (CAGE) data [29, 30, 44] were taken from the ‘RIKEN CAGE Loci’ track of the UCSC Genome Browser (assembly hg18). Nucleus CAGE clusters for GM12878 (1.18 million), K562 (8.86 million) and HepG2 (5.89 million) cell-lines were analyzed here. Discretely located CAGE clusters were taken as individual proximal promoters (or TSS), and promoter expression levels were computed as the number of CAGE tags in a cluster divided by the length of the cluster. Intronic CAGE expression levels were calculated in the same way over entire gene loci.

DNaseI Hypersensitive Site (DHSS) data, generated using the digital analysis of chromatin structure (DACS) technique [32], were taken from the ‘UW DNaseI HS’ track of the UCSC Genome Browser (assembly hg18). The DACS sequence reads were re-mapped to the human genome reference sequence (assembly hg18) in order to rescue individual tags that map to multiple genomic locations as previously described [45], resulting in approximately 30.40, 35.15, 27.32, 44.10, 28.59 and 38.40 million reads in the GM12878, K562, HepG2, HeLa-S3, H1Hesc and HUVEC cell-lines respectively. For each locus, DHSS density was computed as the number of tags mapping on the locus divided by the length of the locus.

This work was supported in part by the Fulbright foundation through a PhD scholarship to DJ; The School of Biology, Georgia Institute of Technology [to IKJ, DJ and ABC]; An Alfred P. Sloan Research Fellowship in Computational and Evolutionary Molecular Biology [grant number BR-4839 to IKJ]; the Buck Institute Trust Fund [to VVL]; National Science Foundation grants MCB-0950896 and BCS-0751481 [to SVY].

We would like to acknowledge members of the Jordan, Lunyak and Yi labs for helpful discussions. We are grateful to the ENCODE consortium for making their data freely accessible and acknowledge the use of data generated by the ENCODE institutions and groups below: University of Washington/Sandstrom lab (expression and DNaseI hypersensitive sites data), HudsonAlpha Institute/Myers lab (DNA methylation and Pol2 binding data), Riken Omics Science Center/Carninci lab (CAGE data)

21. Saxonov S, Berg P and Brutlag DL. A genome-wide analysis of CpG dinucleotides in the human genome distinguishes two distinct classes of promoters. Proceedings of the National Academy of Sciences of the United States of America. 2006; 103(5):1412-1417.