Diffuse gliomas represent a biologically heterogeneous group of primary brain tumors [1]. Their intrinsically invasive characteristic encumbers complete surgical resection, mandating the development of more effective medical therapies [2]. World Health Organization (WHO) grade I gliomas are often curable with definitive surgical resection [3]; WHO grade II, III, and IV gliomas are malignant, diffuse, and with poor outcome; glioblastoma (WHO grade IV, the most invasive grade) is characterized by astrocytic morphology with induced angiogenesis and/or necrosis. The ability of the current WHO classification for predicting human glioma diagnosis and prognosis remains limited [4, 5]. In the past 30 years, many molecules have been implicated in the grading of prognostically different astrocytic tumors [6]. In 2009, it was determined that isocitrate dehydrogenase (IDH) 1/2 mutations were correlated with a prognostically improved adult glioma subtype. IDH1 mutation affects amino acid 132 of the IDH1 gene. The analogous amino acid (R172) of the IDH2 gene is often affected in tumors without IDH1 mutations. IDH1 mutation is involved in >70% of astrocytomas, oligodendrogliomas, and secondary glioblastomas [3]. IDH mutant tumors have distinctive genetic and clinical features, and patients with such mutations have better outcome than those with wild-type IDH [3, 7]. Ki-67 is a reliable indicator of cancer cell proliferation activity and is used for routine clinical investigation, and it predicts worse prognosis for patients with glioma [7–9]. Recent studies have defined the molecular classification of gliomas for clinical use [4, 7], but we still look forward to a more convenient method for predicting prognosis based on IDH1/2 mutation status and Ki-67 expression level.

Herein, we explored IDH1/2 mutation (IDH1/2 mut) and its association with Ki-67 expression in primary tumor samples from a large Chinese Glioma Genome Atlas (CGGA) cohort of 703 gliomas (see Supplementary Table S1). The independent prognostic impact of the two biomarkers on patients with glioma [9, 10] was validated using survival analysis. Then, we applied the two biomarkers to predict diagnosis and prognosis in our glioma classification model. 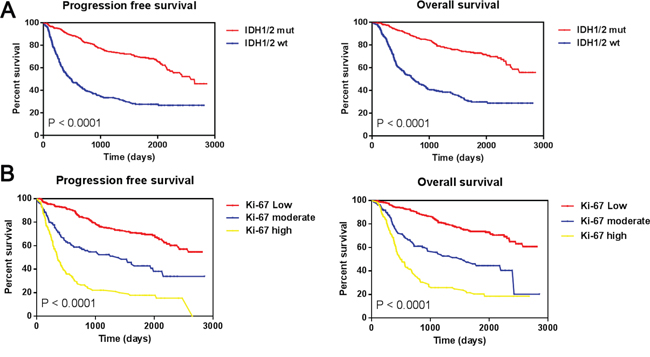 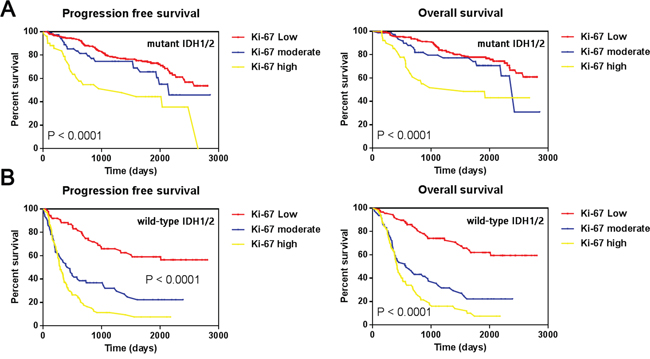 IDH1/2 mutations were first reported in 2009, occurring in about 80% of grade II–III gliomas and secondary glioblastoma multiforme (GBM) [13]. IDH1/2 mutations are early and common events in the etiopathology of astrocytomas, oligodendrogliomas, and oligoastrocytomas, and they are associated with increased DNA methylation, and termed the glioma-CpG island methylator phenotype (G-CIMP) [4]. Wild-type IDH produces α-ketoglutarate, whereas mutant IDH1/2 encodes mutant IDH1/2 proteins. Mutant IDH1/2 proteins have altered substrate specificity and they produce more D-2-hydroxyglutarate, which acts as an oncometabolite [14–16]. Acquisition of IDH1 mutations, followed by compatible molecular changes such as TP53 mutation or 1p/19q codeletion in a common tumor progenitor cell, can lead to gliomagenesis [17]. Although IDH1/2 mutations might not directly trigger tumorigenesis, they increase the risk of other tumor-promoting mutations that cooperate with IDH mutations to induce gliomagenesis [18]. IDH mutation status is stable, while additional molecular events, such as allelic loss of 1p/19q (LOH 1p/19q) or TP53-mutations, accumulate during the progression of low-grade glioma to secondary high-grade glioma [19]. Clinically, IDH mut tumors are associated with longer OS as compared to IDH wt tumors among most glioma entities [4, 7]. Hartmann et al. reported that glioblastoma patients with mutant IDH had better outcomes than that of patients with grade III anaplastic astrocytoma with wild-type IDH [11]. All this suggests that IDH mutations correlate with glioma etiopathology and act as a powerful prognostic factor among patients with gliomas. It is not surprising that current findings suggest that glioma subtypes can be separated following stratification by IDH mutation status [11, 14]. In comparison with IDH1/2 mutations being widely considered a key development in the early stage of astrocytic tumors, increasing Ki-67 expression is considered the terminal event in glioma progression [8, 9, 20, 21]. Ki-67 is a nuclear protein and is frequently considered an indicator of cellular proliferation [22]. Similar to IDH mutation, Ki-67 expression is also an independent prognostic factor in glioma [9]. Recent work has reported that high Ki-67 expression is dominant in IDH1/2 wt gliomas [7] and that low Ki-67 expression is associated with IDH1 mutations in primary GBMs [20]. These findings demonstrate the relationship between Ki-67 expression and IDH1/2 mutations in gliomas.

We classified 703 gliomas according to IDH mutation status and Ki-67 expression level regardless of morphological grading. As shown in Supplementary Table S2, we examined groups based on IDH/Ki-67 and WHO grades in multivariate Cox proportional hazard regression analyses, and we found that IDH/Ki-67 could define novel prognostic groups independent of WHO grade. Our molecular classification model detected significantly different prognoses among the five subtypes. Group 1 patients had the best prognosis, whereas Group 5 patients had the worst. That low Ki-67 expression did not differ significantly from moderate Ki-67 expression in Group 1 in terms of clinical outcome could be attributed to the larger effect size of IDH mutation on prognosis among IDH mut tumors. Given the majority of samples with low (n = 250) and moderate (n = 79) Ki-67 expression among the IDH mut tumors, this effect appeared relatively robust. We also found that patients with IDH1/2 mut gliomas and high Ki-67 expression (Group 2) had worse clinical outcome than did patients with DH1/2 wt gliomas and low Ki-67 expression (Group 3). We speculate that the flourishing cellular proliferation activity in Group 2 contributed to the worse prognosis.

In summary, our results demonstrate that combining IDH1/2 mutation status with Ki-67 expression levels can be used to define five glioma subgroups regardless of the conventional WHO grade. This approach further characterizes the distinct glioma biological properties and clinical outcome and can act as a complementary description to conventional glioma classification.

All glioma samples included in our study were from the Chinese Glioma Genome Atlas (CGGA). The patients underwent surgical resection between January 2006 and December 2010. Patients were eligible for the study if the diagnosis of glioma was established histologically according to the 2007 WHO classification. Tumor tissue samples were obtained by surgical resection before treatment with radiation and chemotherapy. This study was approved by the institutional review boards of the hospitals, and written informed consent was obtained from all patients. The following data were collected: WHO grade (as per original pathology report confirmed with H&E central review per current 2007 WHO grading criteria), survival status (alive or dead), IDH1/2 mutational status, Ki-67 expression, overall survival (OS), and progression-free survival (PFS). Data sets are provided in Supplementary Table S1.