Esophageal cancer is one of the common malignant neoplasms, with very poor outcome. Squamous cell carcinoma (ESCC) accounts for 80% of all esophageal cancer in Eastern countries [1]. Despite the great progress of in the management of operable ESCC, the prognosis for patients with distant organ metastasis is still unsatisfactory [2]. 20–30% of patients are newly diagnosed with ESCC will have distant metastasis. Liver, lung, and bones are the common sites of metastasis [3]. Up to now, the American Joint Committee on Cancer (AJCC) staging system is commonly used to predict prognosis for patients with ESCC. However, some patients with similar clinical stage have remarkably different survival prognosis. In this way, heterogeneity of protein expression profiles may play a very important role in the development of ESCC [4]. The ability to predict patients with high risk of distant organ metastasis would help guide adjuvant chemotherapy or radiotherapy treatment during the decision-making process. To date, most of these markers had not been proven to be sufficiently effective [5].

Recently, Considerable attention has been given to the relationship between cancer metastasis and coagulation. Cancer can cause a hypercoagulable state and this complex system seems to contribute to cancer progression. The incidence of coagulation abnormalities exceeds 50% in cancer patients. To a certain extent, cancer behaves like a wound which never heals [6]. Hypercoagulability is a sign of a more aggressive disease. D-dimers [7] and platelets [8] are reorted to to be correlated with tumor stage, regional lymph nodes involvement and prognosis. In order to analyze if hyperfibrinogenemia is associated with host susceptibility to ESCC, we describe a case–control study of 255 ESCC cases and 273 controls in a southeast Chinese population. Furthermore, we aimed to determine the effects of preoperative plasma fibrinogen level on relapse (locoregional relapse, distant metastasis, and overall recurrence) and survival (locoregional relapse-free survival, distant metastasis-free survival, relapse-free survival, and overall survival). 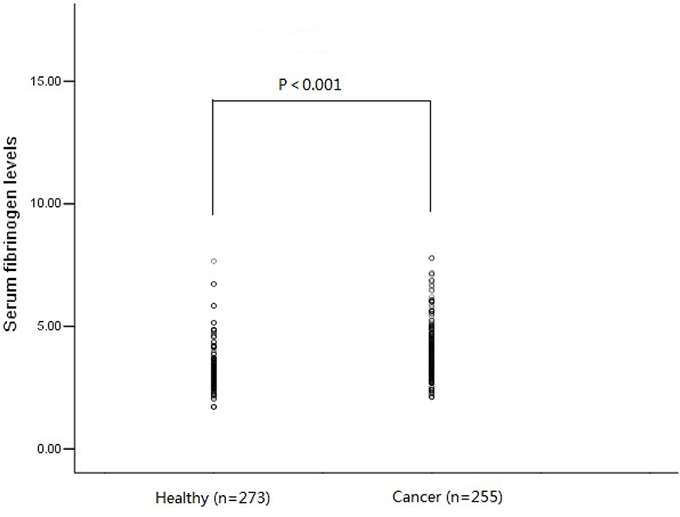 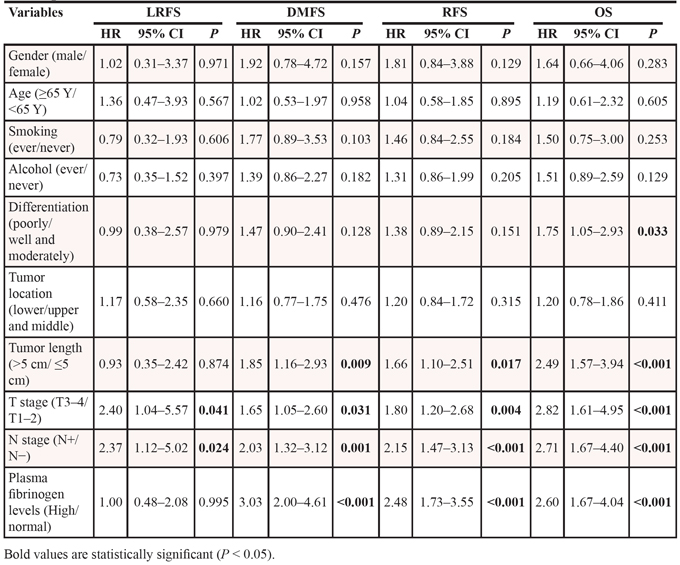 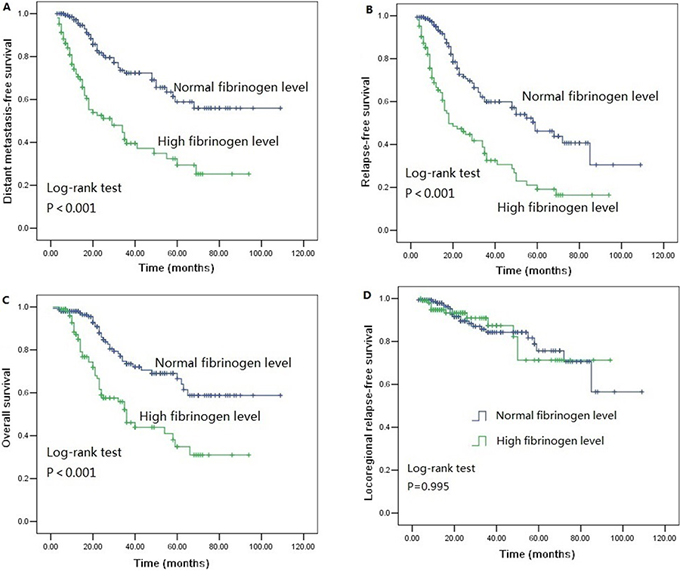 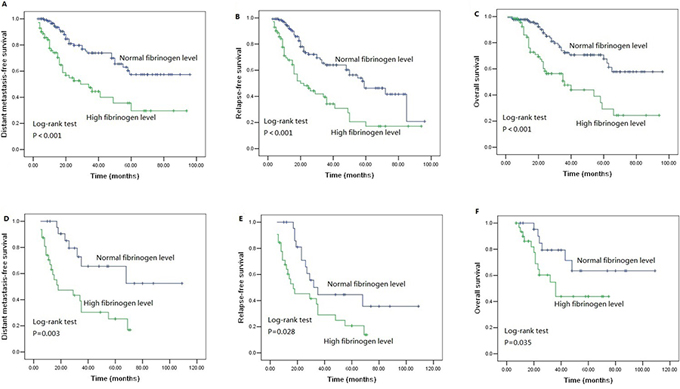 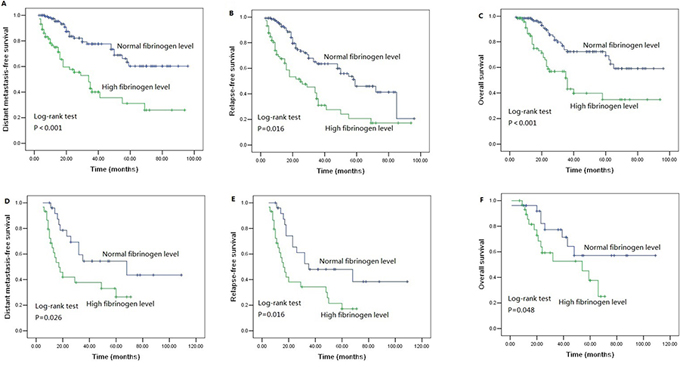 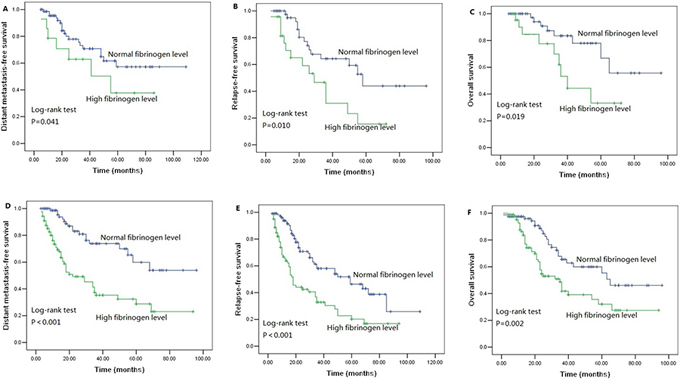 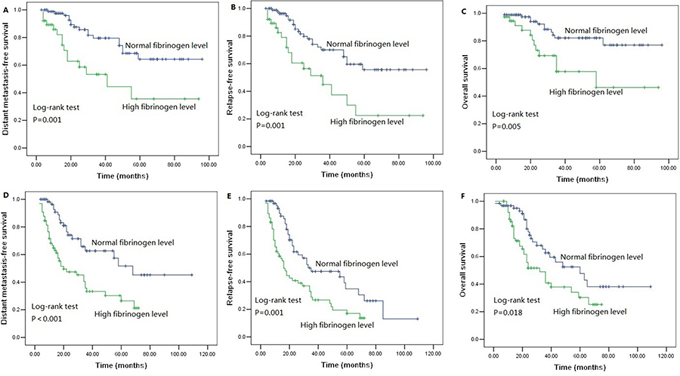 Fibrinogen, converted to insoluble fibrin by activated thrombin, plays a key role in the blood clotting, fibrinolysis, inflammatory response, wound healing, and neoplasia [9]. There have been few previous studies describing the role of fibrinogen during the early onset of ESCC. Qi et al employed proteomic profiling to identify markers that correlated with esophageal malignant transformation. Fibrinogen gamma-A chain precursor was found to have more than five-fold difference in expression between immortal and malignant phenotypes [10]. Therefore, fibrinogen was applicable for early diagnosis in ESCC. However, this study was limited by small sample size. In our study, the proportion of hyperfibrinogenemia was higher in ESCC patients than those in healthy controls (40.4% Vs 13.6%). These results showed that plasma fibrinogen level could be served as an important role in the diagnosis of ESCC.

In conclusion, we found that elevated plasma fibrinogen levels were associated with significantly elevated risk of ESCC. Plasma fibrinogen level, together with tumor length, T stage and N stage is related with postoperative distant organ metastasis. Preoperative hyperfibrinogenemia is a negative prognostic factor for survival of patients with ESCC. However, it still merits further experimental and clinical investigations to confirm its prognostic significance.

A total of 255 patients with ESCC were diagnosed and treated in Zhejiang cancer hospital, Hangzhou, China, between October 2006 and December 2009. All patients were newly confirmed to have ESCC and had not received treatment previously. Patients with the following characteristics were excluded from our study: patients with previous or coexisting cancer other than ESCC; those with concomitant disease suspected of influencing plasma fibrinogen level, such as severe hypertension, liver disease and blood coagulation disorders; and patients who had taken aspirin or other acetylsalicylic acids within 1 month before the treatment; Patients had not undergone complete resection with negative margins. Patients who had undergone exploratory thoracotomy without resection were also excluded from our study. The extent of the disease was determined by TNM staging according to the seventh edition of the International Union Against Cancer (UICC) TNM classification. Our study was approved by the institutional review board of the hospital. All patients provided informed consent before surgery. Population controls were selected from a pool of cancer-free subjects in the same region as cases. The control subjects were frequency-matched to the cases on gender, age and smoking status. Detailed information was obtained by trained interviewers using a structured questionnaire. Finally, a total of 273 eligible subjects enrolled in our study.

Each patient and cancer-free people provided 3-mL pretreatment blood. Plasma was separated within 30 min after the blood samples were collected. Fibrinogen was measured by the Clauss method using Diagnostica Stago equipment and reagent according to Diagnostica Stago guidelines (Asnieres, France). According to the instructions, plasma fibrinogen concentration of less than 4.0 g/L was considered normal level, and concentration of ≥4.0 g/L was defined as hyperfibrinogenemia (also as high level). The eligible patients were divided into two groups: normal group and the high level group, according to the above cutoff value.

The chi-square test was used to assess the frequencies in select demographic variables, patients’ gender and smoking status, between the cases and controls. Patients’ age was compared using unpaired student's t-test. The association between fibrinogen status and ESCC risk was evaluated by computing the odds ratios (ORs) and 95% confidence intervals (CIs) from multivariate unconditional logistic regression analysis with adjustment for gender, sex and smoking status.

We are grateful to the patients who are included in this study. This study was supported by grants from the Nature Science Foundation of Zhejiang province (NO. LY14H160012).