The angiogenic proteins vascular endothelial growth factor (VEGF) and prokineticin1 (PROK1) proteins are considered important in colorectal cancer, the relationship between their simultaneous expression and prognosis was investigated in the present study.

VEGF and PROK1 expression in 620 primary human colorectal cancer lesions was confirmed via immunohistochemical staining with anti-VEGF and anti-PROK1 antibodies, and the correlation between the expression of these 2 proteins and recurrence/prognosis were investigated.

VEGF protein was expressed in 329 (53.1%) and PROK1 protein was expressed in 223 (36.0%). PROK1 and VEGF were simultaneously expressed in 116 (18.7%) of the 620 cases. The correlation coefficient between VEGF expression and PROK1 expression was r = 0.11, and therefore correlation was not observed. Clinical pathology revealed that substantially lymphnode matastasis, hematogenous metastasis, or TMN advanced-stageIV was significantly more prevalent in cases that expressed both VEGF and PROK1 than in the cases negative for both proteins or those positive for only 1 of the proteins.

Also the cases positive for both proteins exhibited the worst recurrence and prognosis. In the Cox proportional hazards model, VEGF and PROK1 expression was an independent prognostic factor.

The prognosis was poorer in colorectal cancers that expressed both PROK1 and VEGF relative to the cases that expressed only 1 protein, and the expression of both proteins was found to be an independent prognostic factor.

The therapeutic outcomes are relatively favorable for early-stage colorectal cancer but unsatisfactory for advanced (stage III/IV) cases, a phenomenon that requires further investigation [1]. Generally, the determining prognostic factor in colorectal cancer is hematogenous metastasis, including liver metastasis [1]. Elucidation of the metastatic mechanism is considered important and will provide the initial step toward the development of novel therapies.

Various molecular biological investigations of hematogenous mechanisms have revealed the following process in which angiogenic factors are closely involved during multiple steps [2–5]: cancer cells dissociate from the primary lesion, followed by basement membrane disintegration, movement within the interstitium, vascular invasion, and cancer cell adhesion, invasion, and proliferation in the target organ [6]. Oxygen and nutrition are supplied to tumor cells from the blood vessels and once the tumor has exceeded 1 mm in size, the blood vessels become hypoxic and angiogenesis becomes an absolute necessity [7, 8]. Cancer cells can directly produce angiogenic growth factors or proteases and release extracellular matrix (ECM)-bound vascular endothelial growth factor (VEGF) to stimulate the vessels and induce angiogenesis [9–10]. VEGF-A was identified as an angiogenic factor in 1989, and the family members VEGF-B, C, and D were subsequently isolated [11–13]. VEGF-A is a 45-kD dimeric protein; in humans, VEGF121, VEGF165, VEGF189, and VEGF206 are produced via alternative splicing. In particular, VEGF165 is thought to be expressed in both healthy and tumor tissues [14–15]. In cancer tissues, VEGF165 correlates strongly with hematogenous metastasis in gastric cancer, colorectal cancer, lung cancer, and other malignant tumors [16–19]. The current National Comprehensive Cancer Network (NCCN) guidelines include anti-VEGF antibody therapy in addition to systemic FOLFOX (folinic acid/5-fluorouracil/oxaliplatin) and FOLFIRI (folinic acid/5-fluorouracil/irinotecan) chemotherapy for the treatment of unresectable/recurrent colorectal cancer [20].

Ferrara reported that Prokineticin 1 (PROK1) acts as a vascular endothelial growth factor in the adrenal gland, ovary, testis, and other endocrine tissues [21]. According to subsequent reports, the post-resection prognosis was significantly poorer for colorectal cancer patients with positive PROK1 mRNA expression than for PROK1-negative patients, and PROK1 protein was found to be involved in angiogenesis and lung metastasis from colorectal cancers [22, 23]. According to recent findings, an anti-PROK1 antibody suppressed angiogenesis in a PROK1 receptor-expressing colorectal cancer subset, and the infiltrative ability of these cells was promoted by an autocrine PROK1 mechanism [24]. PROK1 expression also reportedly correlated with cancer progression and metastasis in pancreatic duct cancer, prostate cancer, neuroblastoma, and several other malignant tumors [25–28]. Therefore, PROK1 is a significant factor associated with tumor malignancy.

To date, individual angiogenic proteins have been investigated as important factors related to hematogenous metastasis in colorectal cancer; however, no study has evaluated 2 angiogenic proteins simultaneously. Accordingly, we examined both VEGF and PROK1, which have been independently correlated with the hematogenous metastasis of colorectal cancer, and obtained the interesting results reported below. 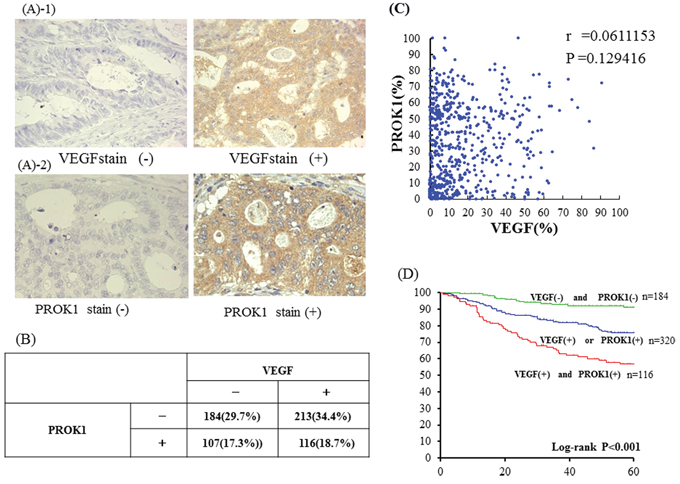 The relationship between PROK1 and VEGF protein expression and clinicopathologic factors

An investigation of the relationship between VEGF/PROK1 protein expression and clinicopathological factors revealed that the group that expressed either of the angiogenic proteins included a significantly greater number of cases with a substantially lymphnode metastasis and hematogenous metastasis (TMN advanced-stage III, IV) relative to the group lacking the expression of both proteins. Furthermore, the group that expressed both proteins had a significantly greater number of cases with lymphnode metastasis, hematogenous metastasis, and TMN advanced-stageIV tumors relative to the other 2 groups. No relationships were found with respect to gender, age, histological type, histological type, lymphatic invasion, venous invasion, and peritoneal metastasis (Table 1).

Table 1: Correlation between clinicopathologic features and VEGF and PROK1 expression

Among stage III colorectal cancers, the hematogenous metastatic recurrence rates were 11.3% among cases with no expression of the 2 proteins, 24.6% among cases that expressed either protein, and 34.1%, a significant increase, among cases that expressed both proteins (Table 2). Among stage I and II cancers, no significant differences were observed in the hematogenous metastatic recurrence rates among the groups that did and did not express VEGF and/or PROK1.

Table 2: Recurrence rate of hematogenous metastasis according to VEGF and PROK 1 expression in each stage of colorectal cancers 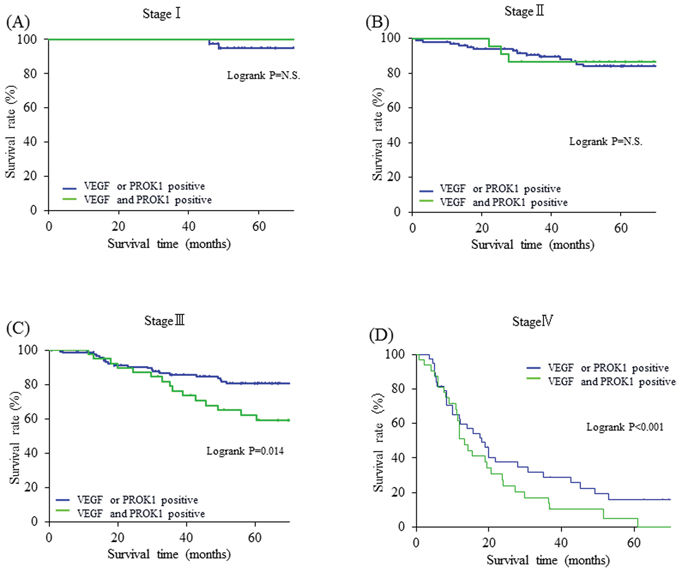 In recent years, gastrointestinal cancer and other various malignant tumors have been investigated via molecular biological techniques, and a considerable number of genes are thought to be involved in the metastatic and growth mechanisms [29, 30]. In particular, a number of reports have implicated angiogenic growth factor involvement in hematogenous metastasis, the significance of which is apparently considerable [31, 32]. Among various gastrointestinal tumors, the most well known VEGF was found to correlate with the hematogenous metastasis of gastric and colorectal cancers [16–18], and elevated VEGF expression induced angiogenesis near the tumor. Furthermore, increased VEGF expression was reported to be a poor prognostic factor for colorectal cancer, among other cancers.

Although the PROK1 protein investigated in the present study was identified as an angiogenic factor in endocrine cells by Ferrara [21], the researchers observed its involvement in the hematogenous metastasis and autocrine mechanism-based invasive ability of human colorectal cancer cells, and its significance in various malignant tumors was demonstrated via its relationship with malignancy in prostate cancer, neuroblastoma, and pancreatic duct cancer [25–28]. Cancer cell growth or progression is considered consequent to the overexpression or deficiency of various factors and, as mentioned earlier, no reports have been published on the simultaneous investigation of VEGF and PROK1, both of which are substantially involved in the hematogenous metastasis of colorectal cancer. Therefore, the simultaneous investigation of these 2 factors is significant.

According to the study results, both PROK1 and VEGF were expressed in approximately 20% of the tumors, either PROK1 or VEGF in approximately 50%, and neither factor in approximately 30%. Clinicopathologically, both PROK1 and VEGF expression relative to the groups lacking the expression of both proteins or either VEGF or PROK1 protein increased significantly in the cases with positive lymph node metastasis, positive hematogenous metastasis, and advanced-stage tumors, suggesting an association between these 2 proteins and malignancy. Furthermore, the recurrence rate was significantly higher when both proteins were expressed in the primary lesions of stage III colorectal cancer patients with a high risk of recurrence when compared with other cases. The prognosis of patients who expressed both proteins was also significantly poorer, thus reflecting the recurrence rate. These 2 proteins are considered important in light of their close relationships with human colorectal cancer metastasis and recurrence.

Regarding the VEGF signaling pathway, VEGF binds to 2 receptors on the cell surface, VEGFR-1 and VEGFR-2, although VEGF signaling primarily acts via VEGFR-2 [33–35]. A dimer forms upon VEGF binding to VEGFR -1 or VEGFR-2, and after autophosphorylation, a cell proliferation-promoting signal is transmitted to the nucleus via a mitogen-activated protein kinase (MAPK) signaling cascade [36]. As a result, angiogenesis occurs and cancer cells use the supplied nutrition and oxygen to support further growth.

As discussed above, VEGF and PROK1 induce angiogenesis via different cellular signaling pathways that initiate from different receptors. Therefore, these proteins are likely to have different functions. According to the results of a multivariate analysis based on a Cox proportional hazards model, the expression of both PROK1 and VEGF was found to be an independent prognosis factor.

In human colorectal cancers, PROK1 and VEGF are important factors for invasion and metastasis. The combined expression of both proteins comprises a significant prognosis factor, as the prognosis was poor when both proteins were expressed.

These factors are considered to be a good indicator for recurrence rate and prognosis. Also it is expected that the prognosis will be improved for patients that expressed both PROK1 and VEGF by treating chemotherapy and additional therapeutics.

Surgical specimens and adjacent normal colorectal tissues were obtained from sporadic 620 patients with primary colorectal cancer. Patients who had undergone surgery for primary colorectal cancer at the First Department of Surgery, University of Fukui, Japan between 1990 and 2007, were studied. Tumors were staged according to the TMN classification [38], 117, 199, 223, and 81 were I, II, III, and IV respectively. Histopathological and prognostic findings were evaluated by two pathologists based upon internationally established criteria. Surgical specimens were fixed in 10% paraformaldehyde (pH6.8) for 24 h, and embedded in paraffin.

DISCLOSURE OF POTENTIAL CONFLICTS OF INTERESTS

All the authors have read the manuscript and have approved this submission.