Colorectal cancer (CRC) is the third most common tumor and the primary cause of cancer-related death worldwide [1]. The main causes of death in CRC patients are tumor cell invasion and metastasis, which is a complex process that involves changes in the extracellular matrix, leading to translocation from the primary tumor to a distant organ with maintenance of growth at a distant site [2]. Although considerable progress has been made over the past decades, the molecular mechanisms underlying tumor invasion and metastasis remain largely unclear. Therefore, it is pivotal to explore the mechanisms of tumor metastasis and to develop the novel strategy for CRC treatment.

Recent accumulating evidence suggests that microRNAs (miRNAs) play a critical role in the regulation of multiple cellular processes during cancer development and progression, including tumor invasion and metastasis [3, 4]. It has been well documented that miRNAs are short endogenous non-coding RNAs that are involved in cellular functions, including proliferation, apoptosis, differentiation and metabolism [5]. Clearly, miRNAs regulate gene expression through binding to complementary sequences, preferentially the 3′-untranslated region (3′-UTR) of target messenger RNA (mRNA), to inhibit translation or promote RNA degradation and even to regulate mRNA transcription [6–8]. A series of studies have shown that deregulation of miRNAs is a common event in tumorigenesis, and correlates with disease stage, metastasis and survival in a variety of human malignancies including CRC [9]. Specifically, some miRNAs acting as tumor suppressors are downregulated in CRC, whereas other miRNAs as tumor promoters are over-expressed in cancer tissue compared with normal tissue [10–12]. Thus, investigating tumor-specific miRNAs and their targets is critical to understand their role in tumorigenesis and to identify new molecular markers for the diagnosis, prognosis, and treatment of CRC. These findings further indicate that targeting miRNAs could be useful for treating human cancers with aberrant miRNAs expression [13, 14].

A recent series of studies demonstrated that miR-625-3p, one member of miR-625 family, contributed to tumor development, progression and metastasis in malignant mesothelioma and CRC [29, 30]. Importantly, increased circulating miR-625-3p could be a potential biomarker for patients with malignant pleural mesothelioma (MM) [30]. Consistent with this, high expression of miR-625-3p has also been associated with poor response to first-line oxaliplatin-based treatment for metastatic colorectal cancer [29]. However, the mechanism and function of miR-625-3p in CRC have not been fully determined. Therefore, in the current study, we investigated whether miR-625-3p plays an important role in controlling cancer cell migration and invasion in CRC by overexpression or depletion of miR-625-3p expression in CRC cells. We further explored whether miR-625-3p exerts its oncogenic function via inhibiting its target SCAI (suppressor of cancer cell invasion). We also determine whether E-cadherin/MMP-9 pathway is involved in miR-625-3p-mediated tumorigenesis in CRC. 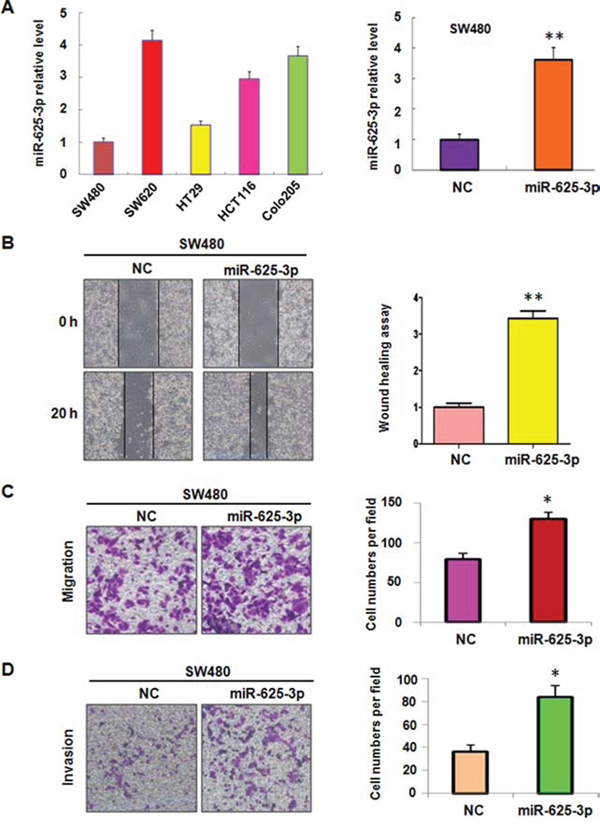 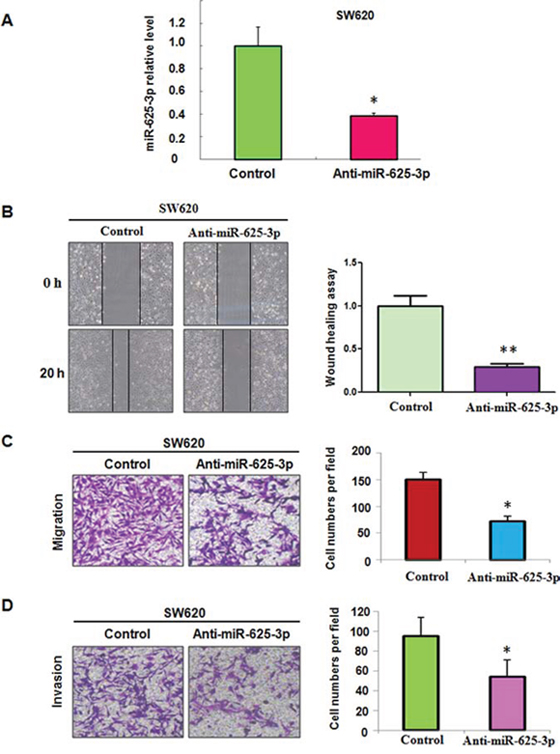 SCAI is a potential downstream target of miR-625-3p

To further understand the molecular mechanism of miR-625-3p-mediated invasion in CRC cells, we sought to identify the target of miR-625-3p. SCAI sequence analysis revealed that it harbors potential miR-625-3p target sites, which are nt 6845–6852 sequences of the SCAI 3′ UTR (Figure 3A). To explore the correlation between miR-625-3p and SCAI, we measured the SCAI mRNA levels in five CRC cell lines. Our results from RT-PCR demonstrated that SCAI expression at mRNA level was dramatically reduced in metastatic CRC cells (SW620 and Colo205) compared with non-metastatic cell lines including SW480, HCT116 and HT29 (Figure 3B). Our Western blotting analysis further confirmed the SCAI protein levels were also down-regulated in metastatic CRC cells compared with non-metastatic cells (Figure 3C, 3D). Next, we measured the expression of E-cadherin in five CRC cell lines because SCAI has been reported to regulate E-cadherin [32]. As expected, like SCAI, the expression of E-cadherin was decreased in metastatic CRC cells (Figure 3C, 3D). Our findings demonstrated that miR-625-3p could promote cell migration and invasion through inhibition of SCAI and its target E-cadherin. 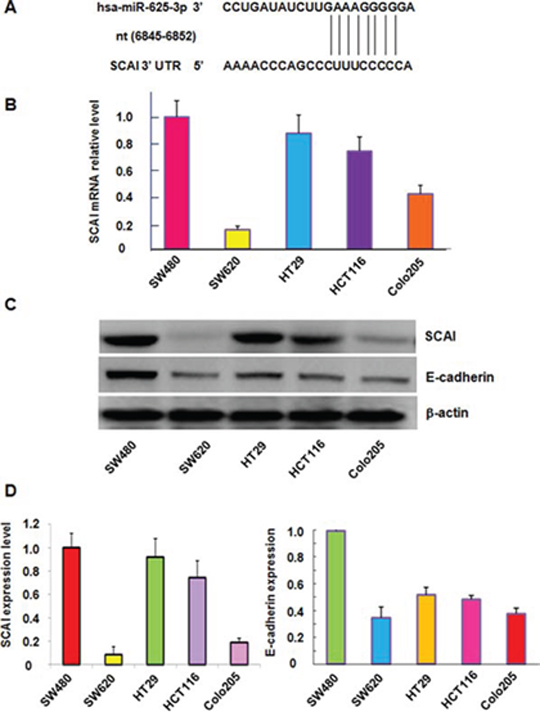 Figure 3: The expression of miR-625-3p, SCAI and E-cadherin was correlated in CRC cells. A. SCAI sequence analysis indicates that it harbors potential miR-625-3p target sites, which are nt 6845–6852 sequences of the SCAI 3′ UTR. B. SCAI mRNA level was detected by real-time RT-PCR in CRC cell lines. C. Western blotting analysis was performed to detect the SCAI protein level in CRC cell lines. D. Quantitative results are illustrated for panel C. 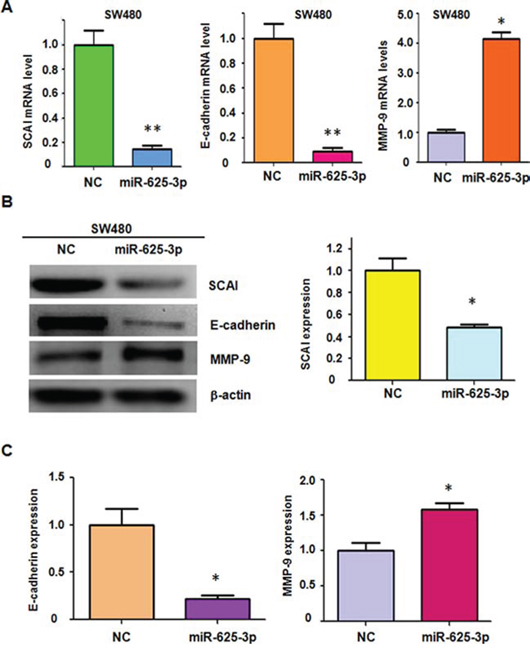 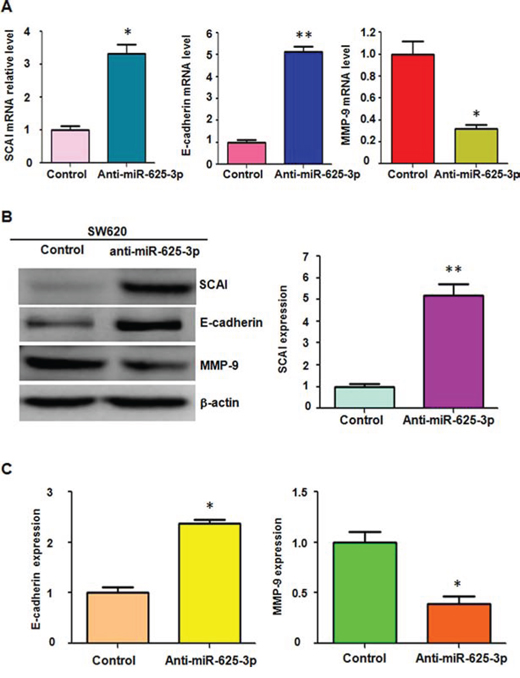 Emerging evidence has indicated that SCAI inhibited migration and invasion in human cancers, and SCAI is downregulated in a variety of human tumors [35–37]. An elegant study defined that SCAI suppressed cancer cell invasion through the transcriptional control of β1-integrin [37, 38]. Chen et al. found that downregulation of SCAI promoted cell invasion and stem cell like phenotype through activation of Wnt/beta-catenin signaling in glioma [36]. Further study demonstrated that SCAI interacts with the tumor suppressing SWI/SNF (SWItch/Sucrose nonfermentable) chromatin remodeling complex to regulate gene expression and promote invasive capacities of human cancer cells [39]. Moreover, SCAI was identified as a novel transcriptional cofactor that regulates EMT [32]. Li et al. reported that miR-1290 promoted cell proliferation and metastasis through inhibiting SCAI in esophageal squamous cell carcinoma [35]. Here, our data suggest that miR-625-3p inhibited SCAI and led to increased migration and invasion in CRC cells. We believe that multiple other miRNAs could be involved in regulating SCAI and further exploration is needed.

It has been reported that SCAI can rescue TGF-β1-induced E-cadherin down-regulation [32], indicating that SCAI governs E-cadherin expression. It has been known that Cadherins play a critical role in cell adhesion and maintenance of normal tissue structures [40]. The disturbance of cadherin-dependent cell interactions is one of reasons that leads to cancer cell invasiveness and metastases [41]. The dysregulated E-cadherin expression could be a key indicator of malignant cancer development and progression. As E-cadherin is an important factor for cell invasion, miR-625-3p promoted cell invasion partly via modulating SCAI/E-cadherin. Matrix metalloproteinases are a family of extracellular matrix (ECM) degrading enzymes, which provide a permissive microenvironment for tumor invasion and metastasis [42]. It has been demonstrated that MMP-9 is involved in the proteolytic cascade-leading ECM cleavage that occurs during CRC metastasis [43, 44]. Moreover, MMP-9 regulated vascular endothelial growth factor-mediated neoangiogenesis of colorectal cancer, and MMP-mediated endoglin mobilisation plays a key role in the regulation of the angiogenic potential of endothelial cells in colorectal cancer [45]. Importantly, E-cadherin has been reported to inhibit MMP-9 expression [33, 34]. Therefore, miR-625-3p-mediated CRC cell migration and invasion may be partly through regulating SCAI/E-cadherin/MMP-9 pathway in CRC.

To this end, we found for the first time that miR-625-3p markedly inhibited SCAI expression and subsequently suppressed E-cadherin and upregulated MMP-9 expression, leading to enhanced cell invasion in CRC (Figure 6). Without a doubt, further in-depth investigation is necessary to fully elucidate the molecular insight on miR-625-3p-triggerd cell invasion in human CRC cells. In summary, our findings reveal the critical role of miR-625-3p in cell invasion and indicate that downregulation of miR-625-3p may be a promising novel approach for the treatment of CRC. 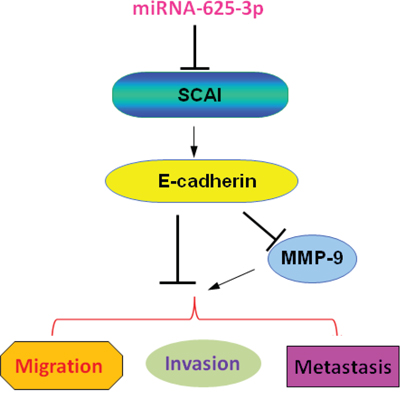 Human colorectal carcinoma cell lines SW480, SW620, HT29, HCT116, and Colo205 were cultured in Dulbecco's modified Eagle medium (DMEM) supplemented with 10% fetal bovine serum (FBS) and 100 U of penicillin-streptomycin in a humidified atmosphere of 95% air and 5% CO2 incubator at 37°C. SW480 and SW620 cell lines with different invasive and migratory abilities were collected from the same patient with colorectal carcinoma. SW480 cells were obtained from the primary site, whereas SW620 cells were from a lymph node metastatic site [31].

The capability of cell migration was examined by wound healing assay. Briefly, SW480 or SW620 cells were seeded on 6-well plates at 5 × 105 cells/well. Cells were transfected with the miR-625-3p mimic or inhibitor when they reached 90% confluence. Following starvation for 24 h, artificial wounds were created by insertion of a sterile 200 μL pipette tip into cells, and then washed 3 times with PBS to remove floating cells and debris. Migration at the wound site was observed and representative images captured under an inverted microscope at 0 h and 20 h to calculate healing percentage as described before [47].

Cell migration and invasion were evaluated using 24-well uncoated and coated transwell cell culture chambers, respectively, as previously described [46]. Briefly, 1 × 105 transfected cells were re-suspended in 200 μl serum-free medium and placed in the upper chamber with the lower chamber containing 600 μl DMEM and 10% FBS. After 24 hours, cells on the lower chamber were fixed with 4% paraformaldehyde in PBS buffer and stained with 0.1% crystal violet. The migrated cells were counted and photographed at 200× magnification in 5 different fields per filter.

Cell extracts were prepared using a cell lysis reagent (Sigma, St. Louis, MO, USA) according to the manual and protein concentrations detected using a bicinchoninic acid (BCA) assay. Equal amounts of total protein were separated by 10% SDS-PAGE and transferred to polyvinylidene fluoride (PVDF) membranes. After blocking in 5% non-fat milk, membranes were incubated with primary antibodies overnight at 4°C followed by incubation in secondary antibodies for 2 h at room temperature on a shaker. The bands were visualized using Western Lightning ECL Pro with horseradish peroxidase (HRP) and then exposed to medical X-ray films for seconds or minutes. β-actin was used as a loading control [47].

All assays were performed in triplicate and data are expressed as mean ± S.D. Differences between groups were analyzed using the two-tailed Student's t-test for two groups. p value < 0.05 was considered significant.

This work was supported by the National Natural Science Foundation of China (81372899, 81172087), and the Key Project of Natural Science Research of the Education Department of Anhui Province, China (KJ2012A202). This work was also supported by a projected funded by the priority academic program development of Jiangsu higher education institutions.