Patients were excluded if they were older than 75 years of age in most clinical trials. Thus, the optimal treatment strategies in elderly patients with locally advanced rectal cancer (LARC) are still controversial. We designed our study to specifically evaluate the cancer specific survival of four subgroups of patients according to four different treatment modalities: surgery only, radiation (RT) only, neoadjuvant RT and adjuvant RT by analyzing the Surveillance, Epidemiology, and End Results (SEER)-registered database. The results showed that the 5-year cancer specific survival (CSS) was 52.1% in surgery only, 27.7% in RT only, 70.4% in neoadjuvant RT and 60.4% in adjuvant RT, which had significant difference in univariate log-rank test (P < 0.001) and multivariate Cox regression (P < 0.001). Thus, the neoadjuvant RT and surgery may be the optimal treatment pattern in elderly patients, especially for patients who are medically fit for the operation.

Neoadjuvant chemoradiotherapy (CRT) followed by total mesorectal excision (TME) is a standard treatment in patients aged 75 years and younger with locally advanced rectal cancer (LARC) [1-5]. Patients were excluded if they were older than 75 years of age in most clinical trials. Elderly patients are more likely to have other concomitant chronic illnesses, which may increase the risk of complications and even death during treatment. Thus, the optimal treatment strategies in elderly patients are still controversial.

We designed our study to specifically evaluate the cancer specific survival of four subgroups of patients according to four different treatment modalities: surgery only, radiation (RT) only, neoadjuvant RT and adjuvant RT by analyzing the Surveillance, Epidemiology, and End Results (SEER)-registered database.

We identified 4,121 eligible elderly patients with LARC in SEER database during the 8-year study period (between 2004 and 2011), which included 1460 patients in surgery only, 577 patients in RT only, 1498 patients in neoadjuvant RT and 586 patients in adjuvant RT. There were 2077 (50.4%) males and 2044 (49.6%) females. Patient demographics and pathological features are summarized in Table 1. Compared with the decreasing pattern of surgery only and adjuvant RT, the increasing trends of neoadjuvant RT and RT only were observed from 2004 to 2011 (Figure 1). 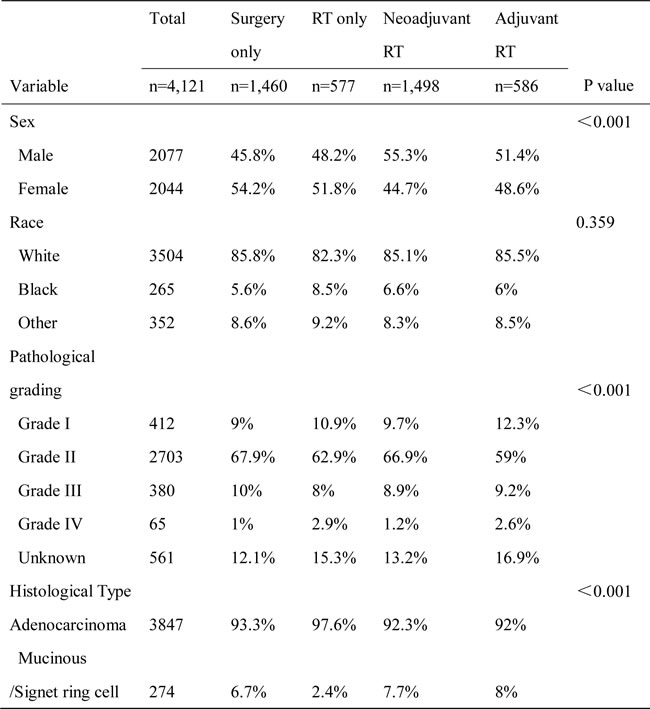 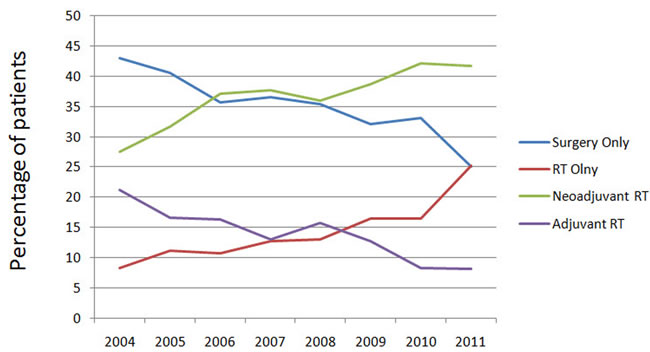 Figure 1: Patterns of care are illustrated for patients who were diagnosed with rectal cancer from 2004 to 2011 according to treatment modality. RT indicates radiotherapy.

The 5-year CSS was 52.1% in surgery only, 27.7% in RT only, 70.4% in neoadjuvant RT and 60.4% in adjuvant RT, which had significant difference in univariate log-rank test (P < 0.001) (Figure 2). Besides, mucinous/signet-ring cancer (P = 0.022) was identified as a significant risk factor for poor survival on univariate analysis (Table 2). When multivariate analysis with Cox regression was performed, also only treatment patterns and histological type of tumor were the two prognostic factors (Table 2). 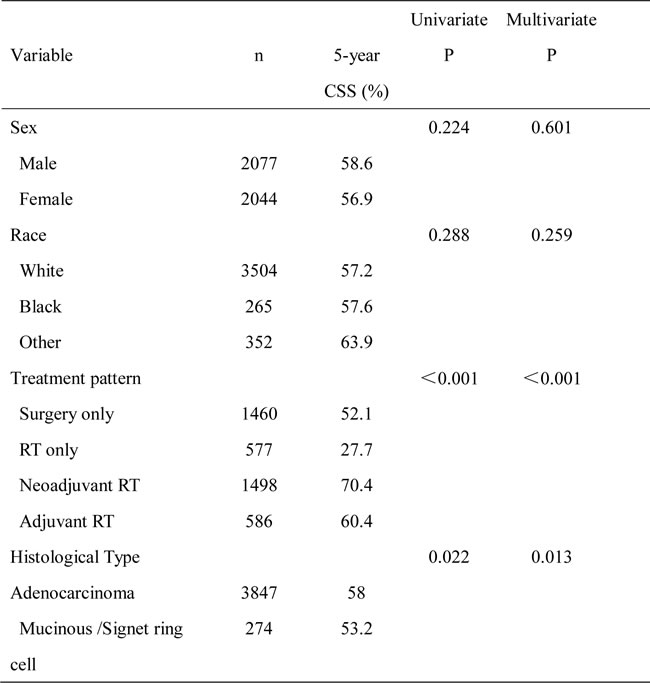 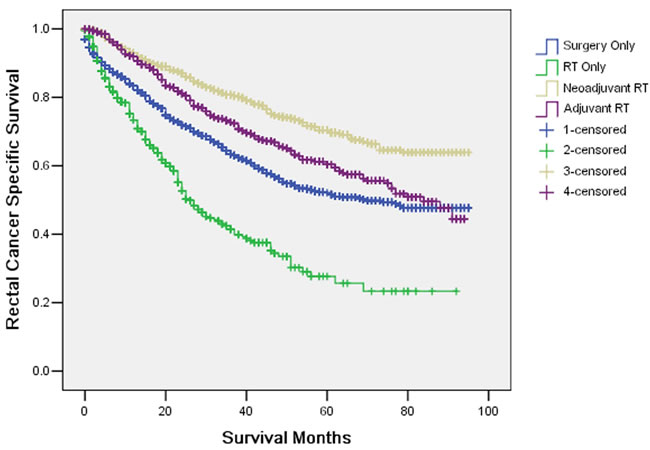 Higher rates of surgical complications, more prevalent co-morbidities, and poorer performance status limit the standard use of multidisciplinary treatment in older patients, and treatment deviation is higher in elderly patients than younger patients. A Surveillance, Epidemiology, and End Results (SEER)–Medicare study of patients more than 65 years of age who were receiving postoperative therapy for rectal cancer showed that 96.6% of Stage III rectal cancer patients completed radiation therapy, only 68.2% and 67.5% completed chemotherapy and both modalities. Among Stage II cancer patients, 91.5% completed radiation therapy but only 49.8% and 47.6% completed chemotherapy both modalities [9]. The rates of treatment deviation may be even higher among individuals 75 years or older.

In contrast, Tougeron et al. found in selected elderly patients, chemoradiotherapy is well-tolerated, without any significant increase in adverse events, and the results are similar to those recorded in younger patients [12]. Cai et al. also suggested that although toxicities may be significant, elderly patients with rectal cancer of varied stages can be safely treated with RT or CRT with careful monitoring and frequent modification of treatment [13].

were not improved. Whereas in the elderly, apart from local recurrence rate (5.4% versus 14%, p = 0.02), also distant metastases free survival (81% versus 69%, p = 0.07) and cancer-free survival (81% versus 66%, p = 0.03) were improved. Thus, the biological behavior of rectal cancer in the elderly in response to radiotherapy is better than in younger patients [14]. Moreover, no significant differences with respect to postoperative morbidity and mortality were found between neoadjuvant RT and surgery only [14-16]. Therefore, neoadjuvant RT and surgery may be the optimal treatment strategy in elderly patients, especially to patients medically fit for the operation.

Surgery is more effective than radiation only. Thus, it is meaningful to optimize the condition of the patient; making him or her more fit for the operation. All colorectal operations carry significant associated risk. To facilitate the best outcomes it is essential to perform a comprehensive evaluation of patient risk preoperatively. Once risk factors are identified the appropriate steps must be taken to minimize their effects. The evaluation of the patient can be broken down by organ systems such as cardiac, pulmonary, hepatic, renal, and gastrointestinal. Additionally, one can assess whether the patient is at risk for infection, hyperglycemia, malnutrition, venous thromboembolism, and anemia. There are many preemptive steps that can be taken to improve patient outcomes in all of these categories. The ultimate goal is achieving improved outcomes [17-23].

Although this is a large population-based study, it has several potential limitations. First, the SEER registry does not collect comorbidity data. One reason that the elderly patients may be undergoing less aggressive treatment may be due to comorbidities. Second, our study is the lack of data in the SEER registry on the use of chemotherapy, resulting in a potentially significant confounder in the current study. It is possible that

patients may have received adjuvant chemotherapy or preoperative chemotherapy. Because preoperative chemoradiation has been the standard of care for patients with locally advanced rectal cancer (LARC). As for patients who are older than 75 years of age, they may receive less chemotherapy. Finally, the current analysis of the nonrandomized patient population could not exclude the possibility of selection bias. One of the treatment patterns was chose for patients may according to their performance status and comorbidities. However, if patients are medically fit for surgery, they may benefit from neoadjuvant radiation.

Cases of rectal cancer (C20.9 Rectum, NOS) from 2004 to 2011 were extracted from the SEER database (SEER*Stat 8.1.5) according to the Site Recode classifications with limitation to radiation prior to surgery and radiation preoperatively and post-surgery. Histological type were limited to adenocarcinoma (ICD-03, 8140/3, 8210/3, 8261/3, 8263/3), mucinous adenocarcinoma (ICD-03, 8480/3), and signet ring cell carcinoma (ICD-03, 8490/3). We selected this range because American Joint Committee on Cancer (AJCC) TMN stage was available since 2004. Other exclusion criteria were as follows: synchronous distance metastases and patients with unknown TNM stage.

Age, sex, race, histological grade, histotype and cancer specific survival (CSS) were extracted from SEER database. CSS was calculated from the date of diagnosis to the date of cancer specific death. Deaths attributed to the rectal cancer were treated as events and deaths from other causes were treated as censored observations. The Kaplan-Meier method was used to estimate the CSS [6]. The association between each of the potential prognostic factors and the estimated CSS was tested with the log–rank test [7]. Multivariate analysis was performed using the Cox regression model [8]. The statistical test was two sided and P < 0.05 was considered statistically significant. PASW Statistics 13 (SPSS Inc., Chicago, USA) was used for the statistical analysis.