Identification and characterization of RET fusions in advanced colorectal cancer

Colorectal cancer (CRC) is the second most common cause of cancer-related death in the United States. Currently, metastatic CRC patients are treated mainly as an unselected cohort with angiogenesis inhibitors and cytotoxic chemotherapy. Only the absence of an oncogenic KRAS or NRAS mutation has been found to predict clinical benefit from treatment with anti-EGFR antibodies [1]. Although recent molecular characterization of CRC has not yet been translated into effective therapeutic strategies [2], comprehensive genomic profiling has emerged as a promising approach that enables the identification of genomic biomarkers that may inform the use of targeted therapy in clinical trials. This therapeutic genomic paradigm is best demonstrated in tumors that are driven by activated protein tyrosine kinases due to oncogenic mutations or rearranged chromosomal fusion [3]. Classic examples include gefitinib inhibition of EGFR mutant kinase in non-small cell lung cancer (NSCLC) and imatinib inhibition of BCR-ABL fusion kinase in chronic myeloid leukemia [4, 5].

Oncogenic RET point mutations and rearranged RET fusions induce hereditary and sporadic tumors [6] . RET fusion kinase occurs in nearly one-third of papillary thyroid cancer and ~ 2% of lung adenocarcinoma, but is not yet identified in CRC [6]. RET fusion kinase juxtaposes the C-terminal RET kinase domain to an N-terminal coiled-coil or leucine zipper dimerization domain from multiple 5’ fusion partners to trigger ligand independent activation of downstream signaling pathways such as RAS-MAPK and PI3K-AKT [6, 7]. Here, we prospectively identified by comprehensive genomic profiling the presence of RET fusion kinase in CRC patients. Evidence of therapeutic response in CRC patient with a CCDC6-RET fusion treated with the RET kinase inhibitor regorafenib highlights the therapeutic importance of genomic profiling in colorectal cancer.

To identify novel oncogenic drivers in colorectal cancer that may be targeted therapeutically, we performed prospective comprehensive genomic profiling using next generation sequencing (NGS) on metastatic colorectal tumors in the complete coding sequence of 236 cancer-related genes and the introns of 19 frequently rearranged cancer-related genes (Supplemental Table 1). Prior retrospective analyses with NGS of 40 CRC specimens detected a C2orf44-ALK fusion kinase but did not identify any RET fusion kinase [8]. As expected, we detected mutations in KRAS, PIK3CA, BRAF, p53 and APC, which are known mutated oncogenes and tumor suppressors in CRC (data not shown). We prospectively profiled 3,117 metastatic colorectal tumors, and identified the presence of 6 RET fusion kinases to give a frequency of 0.2% (Figure 1A). The clinicopathologic characteristics of these six RET fusion-positive CRC patients revealed the absence of a concurrent driver mutation or other fusion tyrosine kinases (Figure 1B). We identified two novel RET fusion kinases involving 5’ fusion partners Coiled Coil Domain Containing 6 (CCDC6) and Nuclear Receptor Coactivator 4 (NCOA4) in two patients with metastatic CRC. Patient 1 had a CCDC6-RET fusion kinase with amino-terminal CCDC6 exon 1-2 and carboxyl-terminal RET exon 11-19 (Figure 1C). The CCDC6-RET fusion kinase in patient 1 occurred at a novel breakpoint at CCDC6 intron 2 and RET intron 10 from a chromosome 10 inversion event, which differs from the CCDC6-RET fusion kinase breakpoints in thyroid cancer and lung cancer that fused CCDC6 exon 1 to RET exon 12-20 [9]. Patient 2 had an NCOA4-RET fusion kinase with amino-terminal NCOA4 exons 1-9 and carboxyl-terminal RET exons 12-19, with breakpoints at NCOA4 intron 9 and RET intron 11 from a chromosome 10 tandem duplication event (Figure 1D). The NCOA4α isoform observed in patient 2 was nearly full length in comparison to the truncated NCOA4β isoform fused to RET exon 12 in papillary thyroid carcinoma and NSCLC adenocarcinoma [10, 11]. 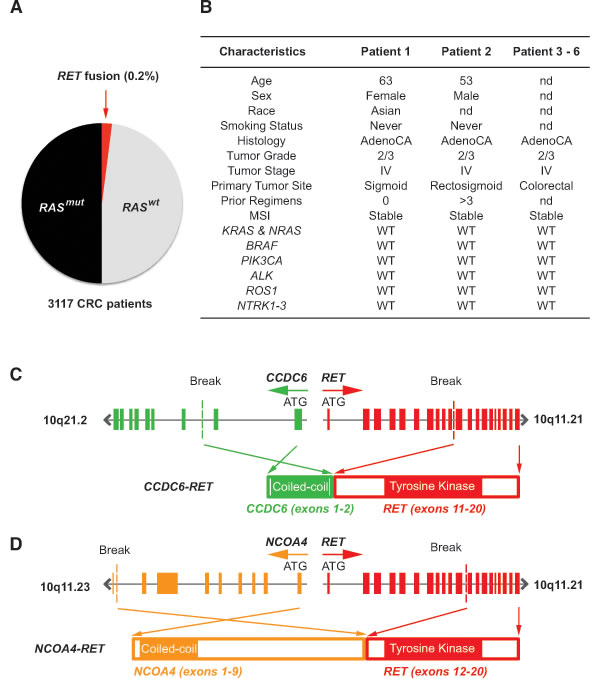 Because regorafenib inhibits the proliferation of thyroid TT cells driven by oncogenic RETC634W point mutation [12], we next tested the ability of regorafenib to inhibit RET fusion-positive cancer cells. Using two different primer pairs that either bound within the RET kinase domain or flanked the CCDC6-RET fusion site, we confirmed by quantitative PCR that Lc2/ad cancer cells, but not several KRAS wildtype and mutant CRC cells, harbored the CCDC6-RET fusion kinase (Figure 2A) [13]. Treatment with nanomolar concentration of regorafenib was cytotoxic to Lc2/ad cells, but the RET fusion-negative CRC cells remained resistant even at micomolar concentration (Figure 2B). Vandetanib and lenvatinib, which are FDA-approved RET kinase inhibitors with clinical efficacy against RET fusion-positive thyroid cancer [14, 15], followed the same pattern and specifically inhibited only Lc2/ad cells viability (Figure 2C and 2D). In contrast, both KRAS wildtype Lc2/ad and SW48 cells had increased sensitivity to erlotinib treatment, and KRAS mutant CRC cells were resistant to this EGFR kinase inhibitor as predicted (Figure 2E) [16]. RET kinase inhibitors specifically suppressed only RET fusion-positive cancer cells viability and did not show non-specific suppression of RET fusion-negative CRC cells viability with either KRAS wildtype or mutant status. 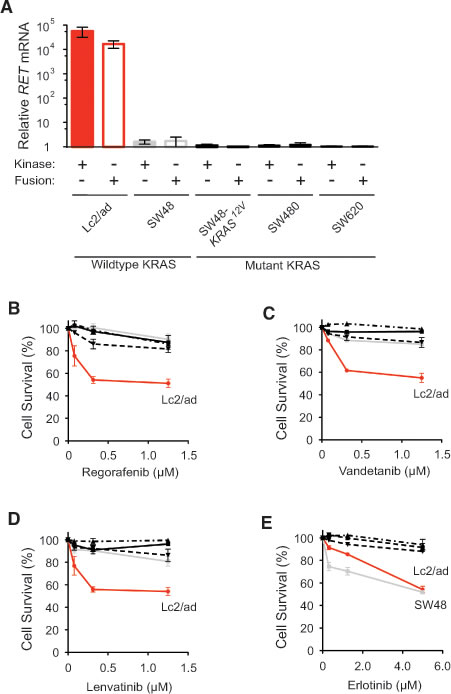 The absence of a concurrent driver mutation in RET fusion-positive CRC patients suggest that they may respond to a RET kinase inhibitor. Patient 1 was a 63-year-old woman who was diagnosed with stage IV sigmoid colon adenocarcinoma, and the PET/CT and MRI scans showed widespread metastases most notable for an enlarged liver that was nearly replaced by tumor (Figure 3A). Patient 1 declined chemotherapy-based treatment and wished to minimize therapy related toxicity. She was treated with low-dose regorafenib 80 mg daily for 3 days and continued at 40 mg daily. Clinically, patient 1 had resolution of her early satiety and abdominal discomfort within 1 week of regorafenib initiation. She had a rapid CEA response from 471 to 158 and LDH response from 3310 to 1651 after 18 days of treatment (Figures 3B-3C). No further follow-up was available as the patient succumbed to urosepsis shortly thereafter. Her clinical and CEA tumor marker responses suggested regorafenib has single agent activity in RET fusion positive CRC. 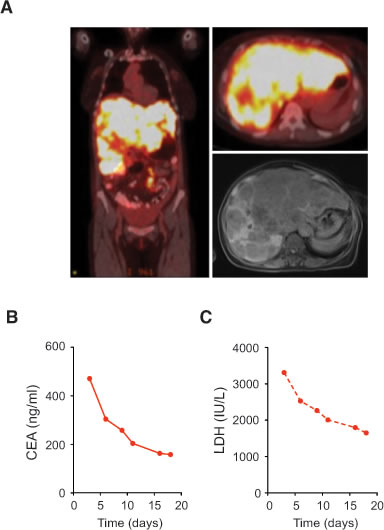 Next, we analyzed the Catalogue of Somatic Mutations in Cancer (COSMIC) database for cancer-related gene fusions and point mutations in CRC patients. In addition to the six RET fusion kinases we have identified, there were other fusion kinases involving ALK, NTRK and ROS and WNT pathway fusions involving RSPO and TCF7L2 (Figure 4A) [8, 17-21]. Based on the COSMIC database, genetic alterations by rearranged fusions were less common than missense or nonsense point mutations in those genes. RET point mutations occurred in 5.7% of CRC patients, and 30 of the 84 RET point mutations were localized within the RET kinase domain (Figure 4A). Notably, 8 RET mutations occurred specifically at E768, R844, S904, R912 and M918 (data not shown), which corresponded to hereditary RET mutated sites in familiar medullary thyroid carcinoma and multiple endocrine neoplasia type 2B [6, 22]. 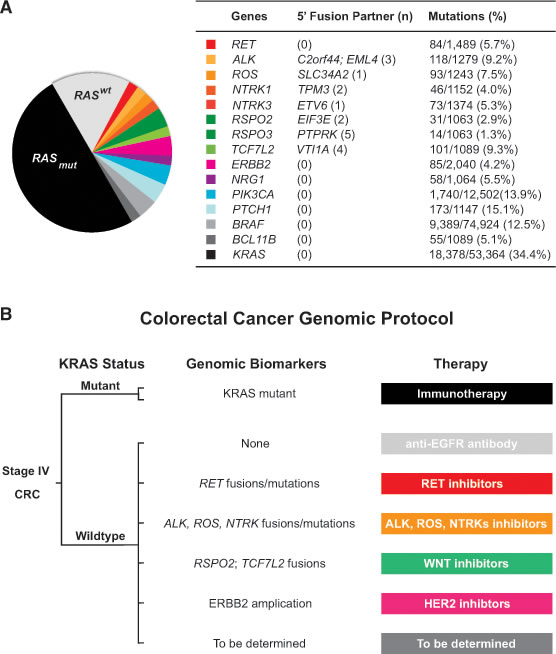 Our data suggest that CRC patients who harbor RET fusion kinase without a concurrent driver mutation may respond to regorafenib, a potent RET kinase inhibitor with an IC50 of ~ 1.5n M [12]. The in-vitro studies suggest low dose regorafenib potently suppresses RET fusion-positive cancer cells but has minimal inhibitory activity in RET fusion-negative CRC cells. Indeed, only 1% of unselected metastatic CRC patients treated with regorafenib had an objective or partial response in the CORRECT trial, which demonstrated a 1.4 month overall survival benefit compared to placebo [24]. We cannot preclude the possibility that the clinical activity of regorafenib in the CORRECT trial may be due to its inhibition of other kinase targets such as PDGFR or VEGFR, and RET fusion status analysis of the 1% regorafenib responders is needed. Since these RET fusion-positive CRC patients received a high median dose of regorafenib 147 mg daily, additional potential off-target effects likely contributed to the 54% incidence rate of severe or life-threatening adverse events [24]. Notably, RET fusion-positive cancer cells, but not RET fusion-negative cancer cells, had similar exquisite sensitivity to regorafenib, vandetanib and lenvatinib, which share RET and VEGFR kinases as the only common molecular targets. In light of the poor single agent activity of angiogenesis inhibitor in CRC patients, our findings suggest that the presence of RET fusion kinase identifies a subset of CRC patients with exceptional response to RET kinase inhibition. Further work and larger series are required to confirm and expand upon our findings.

Treatment of metastatic CRC patients with regorafenib at the maximum tolerated dose as used in the CORRECT trial has significant toxicity, and low-dose regorafenib may be of sufficient potency to inhibit tumors driven by RET fusion kinase [24]. To minimize therapy related toxicity and improve anti-RET kinase response, it is worthwhile to evaluate the therapeutic index of currently available anti-RET tyrosine kinase inhibitors in the subset of CRC patients who express RET fusion kinase. Although there may be a tissue-specific or contextual contribution to response, our findings are similar to reported responses to RET-directed therapies in thyroid cancer and NSCLC. Currently, several tyrosine kinase inhibitors with anti-RET kinase activity such as vandetanib, lenvatinib, ponatinib, and carbozantinib are at various stages of clinical development for medullary thyroid carcinoma, in which RET is the critical oncogenic driver, and lung adenocarcinoma. Vandetanib, cabozantinib, and lenvatinib are FDA-approved as treatment in advanced thyroid cancer, since they significantly prolonged progression-free survival when compared to placebo [14, 15, 25]. In RET-fusion positive NSCLC patients who had progressed on prior chemotherapy, treatment with the RET kinase inhibitors, vandetanib or carbozantinib, results with partial responses in three patients [26, 27]. We now extend the clinical activity of RET fusion kinase inhibition to CRC patients.

Our analysis of the COSMIC database summarizes the frequency of oncogenic fusion kinases and point mutations in CRC patients. However, the COSMIC database most likely underestimates the frequency of gene fusions and point mutations in CRC patients since the entire coding sequence of each gene was not determined. Using a comprehensive genomic profiling approach, we prospectively identified 6 RET fusions in CRC and an overall RET fusion frequency of 0.2%. The identification of CRC patients with actionable RET fusion kinase provides further evidence of the impact that NGS has on clinical decision-making, and we anticipate the rapid adoption of prospective genomic profiling as a part of standard practice. The availability of NGS facilitates a therapeutic genomic paradigm to classify CRC based on actionable genomic biomarkers such as RET, ALK, NTRK, ROS and ERBB2, which may facilitate the clinical trial development of a Colorectal Cancer Genomic Protocol (Figure 4B).

A total of 8,000 cells/well were plated in 100µl of culture media in 96-well plates and treated the next day with 100µl of 0.1% DMSO media control or drugs at the indicated concentrations. After 72 hours, AlamarBlue (Life Technologies) was added, and cellular fluorescence was quantified per manufacturer instruction with a BioTEK Synergy 2 microplate reader.

This study was supported by the American Cancer Society ACS-IRG 98-279-07 grant (to VKC) and the National Cancer Institute P30CA062203 grant. PJS, VAM, SMA, EMS, JSR, and SB are employed by and have equity interest in Foundation Medicine.

The other authors have no potential conflicts of interest.