Hepatocellular carcinoma (HCC) is the fifth most lethal malignant cancer and the third most frequent cause of cancer mortality worldwide [1]. The annual incidence has increased in recent years. In the year 2002, China had 55% of the world’s diagnosed HCC patients, making this disease a burden on the country [2]. Despite the sophisticated progress in diagnostic techniques and advanced instruments in surgery, the prognosis remained far from satisfactory due to the high rate of recurrence and metastasis [3, 4]. The lack of a sensitive clinical parameter has a profound impact on HCC therapeutic practice. Therefore, searching for an effective preoperative marker is important in diagnosis and prognosis of HCC; it is also beneficial to HCC patients’ treatment.

In clinical practice, doctors commonly use liver enzyme aspartate aminotransferase (AST), which may reflect liver function or damage, as a routine biochemical test for diagnosis of various diseases including HCC [5, 6]. Growing evidence demonstrates the relationship between high serum levels of AST and mortalities of HCC [7, 8].

There is a highly significant relationship between systemic chronic inflammatory disorders and high incidence of a variety of cancers including HCC [9-12]. Malignant tumor cells lead to an intracellular inflammatory program, which may result in the promotion of angiogenesis and the inhibition of apoptosis, ultimately, causing tumor formation, proliferation, metastasis, and recurrence [13, 14]. Emerging evidence indicates that patrolling and infiltrating lymphocytes reflect the patients’ inflammatory status as well as their bodies’ ability to exert decisive function in antitumor immune responses [15-17].

To our knowledge, no population-based study has been conducted related to the prognostic value of preoperative AST to lymphocyte ratio index (ALRI) in predicting tumor recurrence in HCC patients after curative resection. An improved understanding the value of preoperative ALRI in HCC survival will provoke new ideas for therapeutic approaches.

Determination of the cutoff value of preoperative ALRI in HCC

To identify the optimal cut-off value of preoperative ALRI, an ROC curve was obtained by using MedCalc analysis, which indicated that the score of 25.2 has the maximum sensitivity and specificity for predicting survival status. The area under receiver operating curves (AUC) was 0.664 with a 95% CI of 0.613 to 0.712, a sensitivity of 60.3%, and a specificity of 67.2% (Figure 1A).

The relationship between preoperative ALRI and clinicopathological variables of patients with HCC was investigated after the results obtained from the ROC curve were analyzed. The data showed that preoperative ALRI was correlated with age (χ2 = 7.275, p = 0.007), median size (χ2 = 8.477, p = 0.004), clinical TNM stage (χ2 = 29.539, p < 0.001), and PVTT (χ2 = 15.956, p < 0.001). Nonetheless, there were no statistical connections between preoperative ALRI and other clinicopathological parameters including gender, family history, HBsAg, AFP, cirrhosis, tumor number, distant metastasis, and recurrence (all p > 0.05, Table 1).

Table 1: Correlation between the clinicopathologic variables and ALRI in HCC. 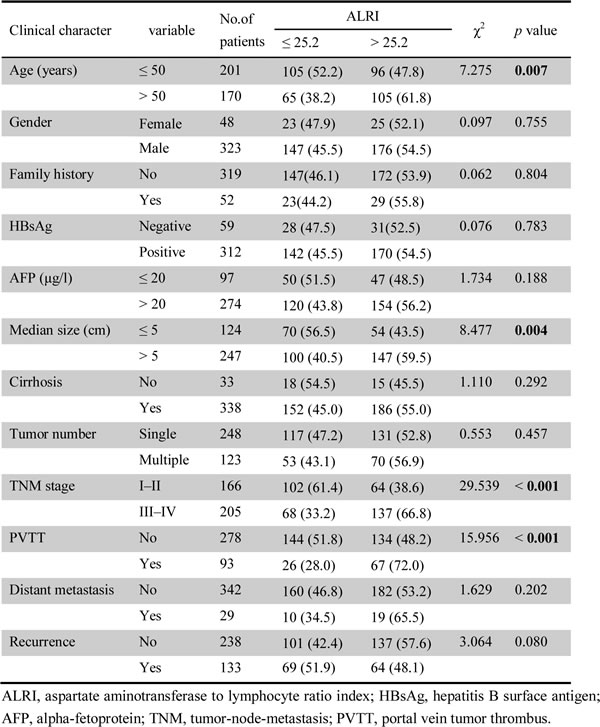 The correlation between the survival status and preoperative ALRI 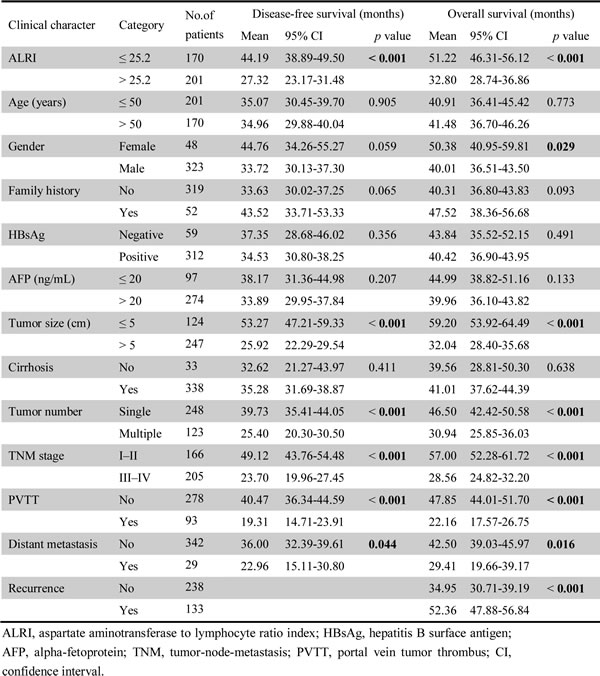 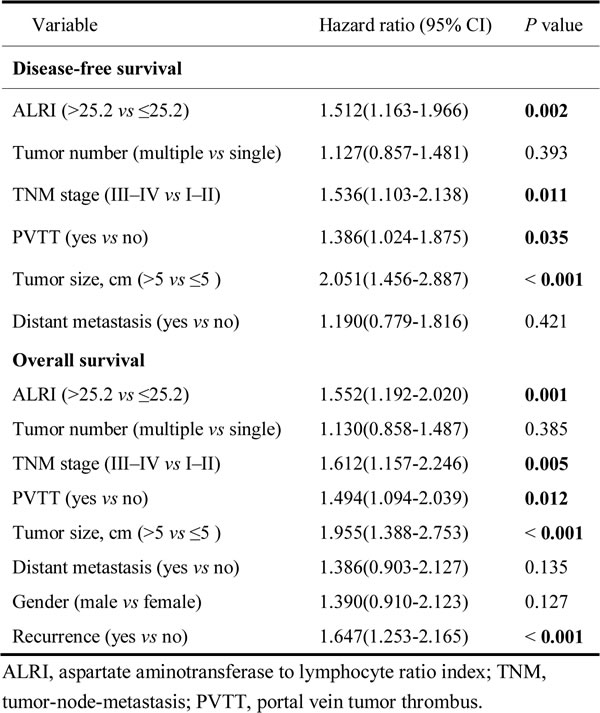 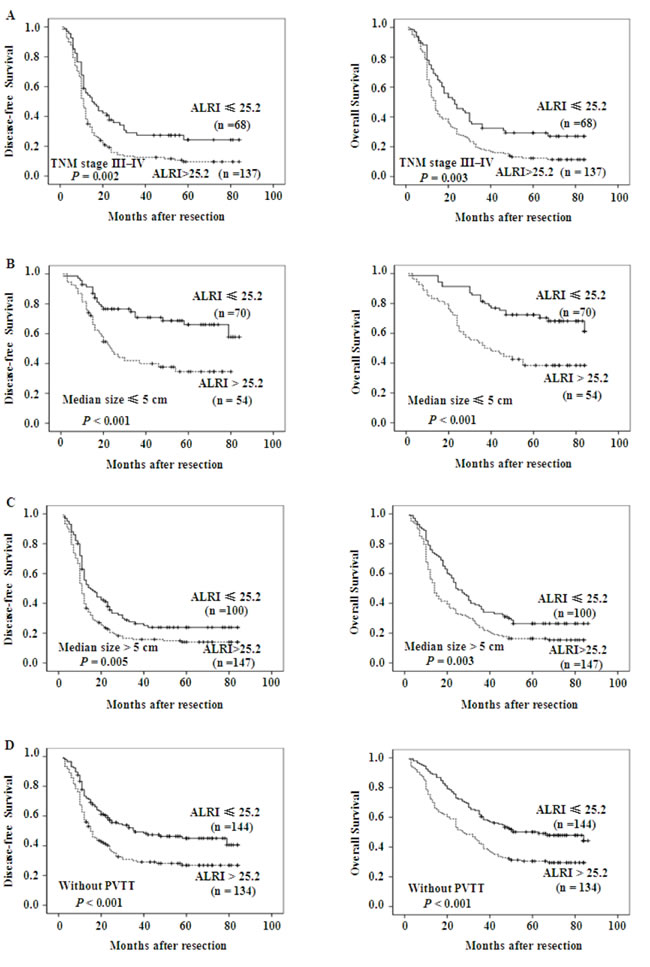 Figure 3: Kaplan-Meier survival curves of different HCC subgroups after hepatectomy. Kaplan-Meier survival estimates and log-rank tests were used to analyze the prognostic significance of preoperative ALRI in each subgroup. ALRI > 25.2 significantly correlated with shorter DFS and OS in subgroups with TNM stage of III/IV (Figure A), tumor size ≤ 5cm (Figure B), tumor size > 5cm (Figure C), and those without PVTT (Figure D).

The prediction of prognosis plays a key role in therapeutic options of HCC. A huge endeavor had been made in searching of valid indicators predicting HCC prognosis, but clinically doctors still rely on conventional pathological diagnosis such as tumor size, TNM stage, and distant metastasis status. Therefore, finding a non-invasive biochemical marker is of great importance in patients with HCC.

AST is a biochemical enzyme that plays a crucial role in the metabolism of amino acid and exists mainly in liver but as well as in heart, skeletal muscle, kidney, and brain; it is well known that AST is a reliable and sensitive biochemical marker of liver injury. A higher AST level is correlated with a greater influx of hepatitis B virus, that associates with decreased overall survival in HCC patients [8]. However, advancing liver diseases may be related to mitochondrial injury, which leads the release of AST to the mitochondria as well as the cytoplasm of hepatocytes [18]. Additionally, some studies have found that AST-to-ALT ratio was an excellent predictor for a large number of hepatic disorders [19-21] and classical aspartate aminotransferase to platelet ratio index (APRI) was associated witha poor prognosis in liver diseases including HCC [22-25].

The close correlation between systemic inflammation and malignant neoplasm is all-too-common in the liver because HCC almost exclusively arises due to chronic hepatitis disease [26]. Lymphocyte plays central roles in host’ antitumor immune responses, and its presence closely relates to a reduced risk of relapse in several situations [27]. Systemic inflammatory cytokines, such as tumor necrosis factor α (TNFα), interferon γ (IFNγ), and Toll-like receptor 3 ligands, stimulate the expression of a series of intra-tumor chemokines. These chemokines include chemokine (C-C motif) ligand 2 (CCL2), CCL5, and chemokine (C-X-C motif) ligand 10 (CXCL10), which have a close relationship with the increase of CD4+ T helper type 1 lymphocytes (Th1) cells and CD8+ cytotoxic T lymphocytes (CTLs). Once activated, the CD4+ Th1 cells will eliminate malignant tumor cells and effectively prevent oncogenesis [28, 29]. The initiated CTLs will directly kill carcinoma cells or inhibit angiogenesis by secreting cytotoxin [30]. Some evidence suggests that CTLs located in the special microenvironment are positively relevant to favorable prognosis in numerous malignant cancers [31]. Conversely, as a subpopulation of T lymphocytes, natural killer T (NKT) cells making up about 30% of all lymphocytes in the liver [32] may also act as an important role in antitumor immunity. It has been reported that NKT lymphocytes can perform anti-metastatic roles by stimulating IL-12 [15]. Moreover, once activated by NKT cells, NK cells perform the main functions in clearing infected cells and malignant cells in the liver, which could greatly reduce the chance of HCC [33-35]. Recent evidence also claims that NK cells kill tumor cells in cancer model [36].

Our current study demonstrated that preoperative ALRI might be a potential predictive marker for patients with HCC. According to the ROC curve, 25.2 appeared to be the most suitable reference value for preoperative ALRI with a sensitivity of 60.3% and a specificity of 67.2% for predicting HCC. Of note, such a correlation has been validated between preoperative ALRI and age, median size, TNM stage, and PVTT; all of which are linked with the progression and prognosis of HCC. Elevated preoperative ALRI (>25.2) was recognized as an independent prognostic factor of both poorer DFS and OS when compared to those with low preoperative ALRI (≤25.2).

The explanation of the association between elevated preoperative ALRI and poorer prognosis of HCC patients should be further clarified. The steep rise in the serum AST is closely connected with the progression of liver diseases, which may reflect the leakage of the membrane and the damage of hepatocytes. Once the hepatic parenchymal cells are injured, intracellular AST will be released into the blood that will lead to a high concentration of serum AST. Conversely, a dramatic decrease of serum lymphocyte may impair host’s antitumor immunity. CD4+ T lymphocyte cells play a “sensing” role in detecting pre-malignant tumor cells and then regulate their eradication, which can hinder the occurrence and development of hepatocellular cancer [37]. An impaired functionality of dendritic cells may notably reduce the amounts of CD4+ T lymphocyte, which may not trigger the removal of pre-malignant hepatocytes, resulting in a rapid development of HCC [38]. Loss of CD4+ T lymphocyte was linked with high mortality rate and reduction of survival time in HCC patients [39]. The decrease in CD4+ T lymphocyte correlates with the impaired activation of CTLs that may not successfully secret a series of cytotoxin performing anti-carcinogenic function within neoplastic microenvironments [40]. Apart from that, the activation of tumor-infiltrating lymphocytes significantly improves therapeutic effect in many cancers [41, 42].

Based on the results of univariate analysis, we concluded that tumor size >5 cm, multiple tumor number, III-IV of TNM stage, PVTT, and distant metastasis were responsible for low DFS and OS rate. This result is consistent with a previous report that multiple tumor (> three) is an unfavorable prognostic factor in HCC recurrence [43], the calculated survival rate is significantly better in HCC patients with a single tumor compared to those with multiple tumors [44], tumor number was independently associated with the survival of HCC patients [45]. PVTT is the major reason of intrahepatic metastasis, which occurs in approximately 40% of HCC patients, and is one of the most negative independent prognostic factors of OS in HCC patients. The appearance of PVTT affects liver’s vascular supply, which may have considerable impact on wide dissemination of malignant tumor cells, thus severely crippling normal liver function, and resulting in poor prognosis in HCC [46-48]. There are growing evidences that the distinctive feature of an aggressive solitary HCC is its capability of metastasis, which leads to a higher possibility of HCC recurrence and is related to as much as 90% of cancer related mortality [49, 50].

It is well known some tumor biomarkers like AFP, CEA, and CA19-9 may reflect cancer cells’ growth, differentiation, invasion and metastasis to some degree [53, 54]. However, the diagnostic sensitivity of these markers has been challenged, for example, a noticeable rise of serum AFP was not observed in 30% of HCC patients [55], multiple factors affected diagnostic accuracy and reliability of CEA [53], and a high level of serum CA19-9 is frequently seen in normal bile secreted by healthy biliary tract [54]. Compared to these tumor biomarkers, the ALRI test meets the requirements of highly precise diagnosis and prognosis, and reduces patients′ economic cost.

We conclude that the optimal cut-off value of preoperative ALRI for predicting the prognosis of HCC was 25.2. Calculating preoperative ALRI is a simple method for the judgment of prognosis in HCC patients. However, our survey also has some limitations; a prospective study with a larger population should be conducted to justify our researches.

The survey protocol was in accordance with the ethical guidelines of the Declaration of Helsinki. Ethical approval was granted by the Ethical Committee of the Affiliated Hospital of Guilin Medical University, and the written consent was obtained from all examined patients or their guardians prior to surgery.

The standard protocols for Vitros system enzymatic rate reaction and complete fluorescent flow cytometry were used to measure the AST and lymphocyte count, respectively. The reference value of AST provided by the laboratory was < 40 U/L (male and female) [6]. Preoperative ALRI was calculated with the following formula: (AST value/ lymphocyte count) × 109/U.

The statistical analyses were performed using SPSS13.0 (SPSS Inc, Chicago, IL). ROC curve analysis was applied to determine the cutoff value of preoperative ALRI by 0, 1-criterion. The Pearson χ2 test was executed to analyze the correlation between preoperative ALRI and clinicopathological parameters. Survival curves for the HCC patients were calculated by using the Kaplan-Meier method. After the univariate analysis by the log-rank test, only variables with p-value < 0.05 were utilized in the multivariate analysis, which used the Cox proportional hazards model to identify the independent prognostic factors for DFS and OS. Hazard ratios (HR) and 95% confidence intervals (CI) were calculated. Differences were considered statically significant at p < 0.05.