Objective: The study was designed to evaluate the efficacy and safety of tyrosine kinase inhibitors (TKIs) plus radiotherapy in patients with brain metastases (BM) of non-small cell lung cancer.

The epidermal growth factor receptor (EGFR) which expresses in a variety of human cancer cells, including ovarian, breast, colon, prostate and NSCLC [16, 17], is a transmembrane receptor protein identified primarily on cells of epithelial origin [18]. Autophosphorylation of its intracellar domain initiates a cascade of events leading to cell proliferation.

Fortunately, EGFR signal pathway can be blocked by small-molecule tyrosine kinase inhibitors (TKIs), including gefitinib and erlotinib, which targeting the EGFR to suppress cancer cell proliferation, invasion and metastases [19, 20]. Currently, TKIs have become increasingly important medications for advanced NSCLC treatment. Some studies showed favourable efficacy and safety in treating patients with BM [21-25] while other studies failed to confirm that [26, 27]. The role of TKIs plus radiotherapy for the treatment of BM patients is contraversial. Therefore, we have conducted a meta-analysis to assess the efficacy and safety of TKIs plus radiotherapy versus regimens with conventional chemotherapeautic agents plus radiotherapy or radiotherapy alone.

Totally, 2460 studies were screened which met our selection criteria after searching the relevant databases; 456 of these studies were excluded due to duplication. By verifying related terms in the titles and abstracts, 1967 irrelevant articles and another 29 unfit designed articles were excluded after the full text was analyzed. Finally, eight clinical control trials [21-28] were identified for the present meta-analysis. A flowchart depicting the study selection is shown in Figure 1. 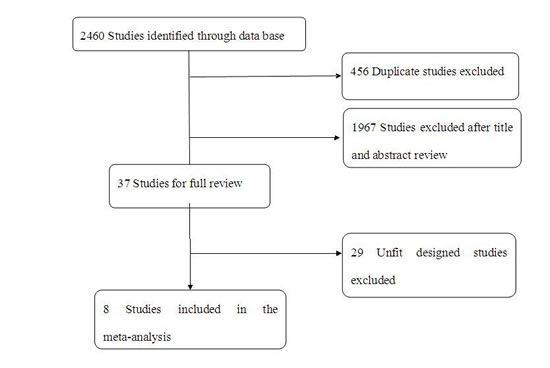 Figure 1: A flow chart on selection included of trials in the Meta-analysis.

Table 1: Characteristics of trials included in the Meta-analysis 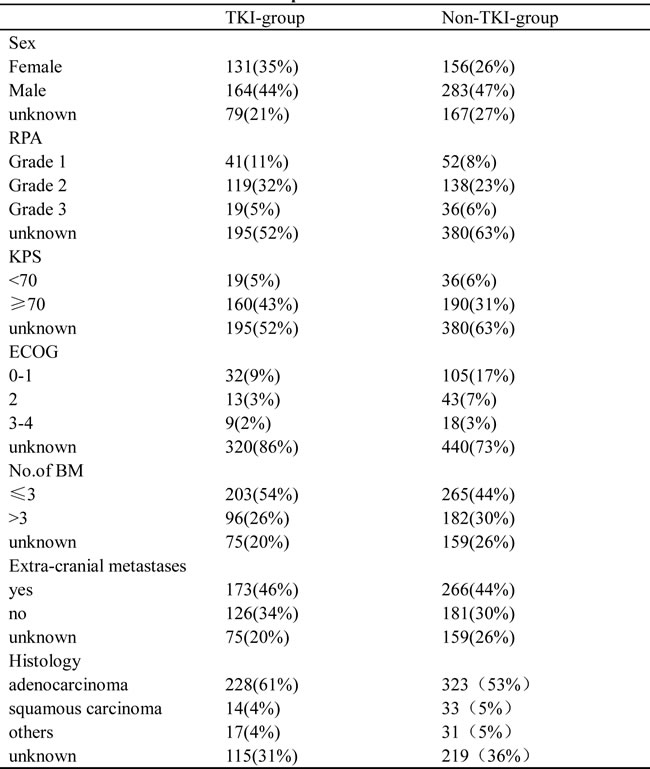 In accordance with the recommendations of the Cochrane Handbook for Systematic Reviews, we evaluated the eligible studies using the four aspects mentioned above. Four studies [23, 26, 27, 28] mentioned the use of random allocation, but only two of them discussed the methods [27, 28]. One study [21] performed or reported their allocation concealment and blinding methods. None of the trial reported follow-up information. All of the articles applied the intent-to-treat analysis. Seven of the eight eligible studies received B quality scores, only one received C quality scores, as shown in Figure 2. 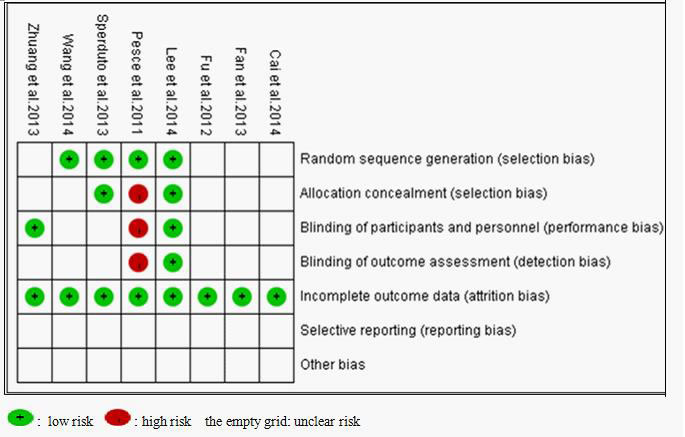 Figure 4: A. Median overall survival (MOS) of the study B. Funnel plot of MOS for included studies. 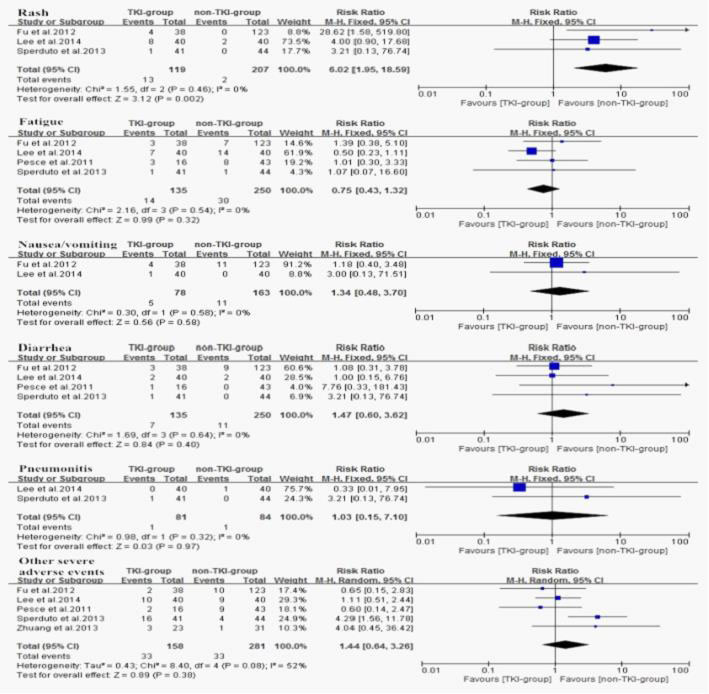 Currently, local radiotherapy treatment remains the standard regimen of BM patients from NSCLC [32]. Several studies have certified that radiotherapy with chemotherapy benefits NSCLC patients with BM [33-35]. However, because penetration of most chemotherapeutic drugs into the central nervous system (CNS) is isolated primarily by the BBB [36], the treatment was unsatisfied at curing malignant BM lesions. Being small-molecule agents, TKIs possess great advantage to penetrate the BBB. The molecular pathways that mediate brain colonization and the alternative to traditional therapy in clinical investigations in BM from NSCLC have drawn widespread attention [37-41]. One pre-clinical study [42] showed that 14C radiolabeled gefitinib could be detected in the CNS of healthy mice after oral dose of gefitinib reached peak plasma concentrations, which suggested that gefitinib could penetrate the BBB, other studies [43-46] also showed that erlotinib appear good permeability through the BBB. Additionally, radiotherapy, immature tumor angiogenesis and edema might amplify the destruction of the BBB and enhanced TKIs uptake and elevated TKIs concentration in cerebrospinal fluid [47-53]. After penetrating into the BBB, TKIs exert their anti-cancer efficacy via following two mechanisms: one is competing with adenosine triphosphate (ATP), the other is to provide sufficient radiosensitizing and therapeutic level in the brain [54-58]. Recently, Togashi et al. [45] reported that CSF concentrations of erlotinib depend on its plasma concentration, and a high-dose administration of erlotinib could lead to its high CSF concentrations, therefore improved its efficacy, especially to refractory CNS metastases of NSCLC patients.

Compared with the conventional chemotherapeutic agents, TKIs appeared favorable effect in treating NSCLC patients with BM [23, 25, 28], which mainly resulted from the distinctive property of the drugs, including their small molecular structure and unique anti-tumor mechanism. Meanwhile, the most common adverse events of TKIs contain fatigue, rash, nausea , vomiting, diarrhea which in most cases are mild and tolerable, and interstitial pneumonia rarely appears. Our study demonstrated that there was no significant difference in overall severe adverse events between the TKI and non-TKI groups, except a tendency that non-TKI group had lower incidence of severe adverse events. This may due to the absence of chemotherapy in most of the non-TKI groups [21, 22, 24, 27].

In summary, the present study suggests TKIs combined with radiotherapy produced superior response rates, markedly prolong the CNS-TTP and MOS of NSCLC patients with BM without significantly enhancing overall severe adverse events. Moreover, it is possible to improve the efficacy through increasing the dosage of TKIs. TKIs plus radiotherapy probably open a promising avenue for treating NSCLC patients with brain metastases.

All projects which met the following criteria were eligible: (1) RCT or clinical controlled trails with voluntarily enrolled patients; (2) Patients had histologically or cytologically confirmed NSCLC and had been diagnosed with brain metastases using CT or MRI; (3) The trials were TKIs plus radiotherapy (WBRT/ SRS/ 3D - C RT alone or in combination) which were considered as TKI-group versus conventional chemotherapy plus radiotherapy or radiotherapy alone (both were considered as non-TKI-group). (4) Trials excluded patients with double or multiple primary cancer or presence of unstable systemic disease. (5) The analyses included objective response rate (ORR), OS, time to central nerves system/neurological progression (CNS-TTP) / neurological progression-free survival (nPFS)/local progression-free survival (LPFS) / progression-free survival of intracranial disease (PFSI) (all were considered as CNS-TTP in this study) , severe adverse events (Grade≥3); (6) Response rate was determined using the Response Evaluation Criteria in Solid Tumors (RECIST1.0 or 1.1 version) [21-23]. Complete remission (CR) was defined as disappearance of all target lesions, any pathological lymph nodes (whether target or non-target) must have reduction in short axis to <10 mm. Partial response (PR) was defined as at least a 30% decrease in the sum of diameters of target lesions, taking as reference the baseline sum diameters. Progressive disease (PD) was defined as at least a 20% increase in the sum of diameters of target lesions, taking as reference the smallest sum on study (this includes the baseline sum if that is the smallest on study), in addition to the relative increase of 20%, the sum must also demonstrate an absolute increase of at least 5 mm. (Note: the appearance of one or more new lesions is also considered progression). Stable disease (SD) was defined as neither sufficient shrinkage to qualify for PR nor sufficient increase to qualify for PD, taking as reference the smallest sum diameters while on study. (7) Adverse events was evaluated according to the National Cancer Institute Common Terminology Criteria for Adverse Events (version 3.0) [22, 26, 27, 28].

The eligibility assessment was first performed by screening titles and abstracts and subsequently reviewing the full text of articles. The selection of all studies was executed independently, according to the inclusion criteria, by two reviewers [Shuimei Luo and Xiuping Chen]. Disagreement on whether an article should be included was resolved using a third reviewer [Xianhe Xie].

Two authors [Shuimei Luo and Long Chen] independently extracted data from all the eligible studies. When the extracted data were not uniform, consultation was needed to make a final determination [Xianhe Xie]. All of the studies included in the analysis contain the following data: first author’s name, published year, type of study, trial phase, country of origin study, percentage of male, performance status, number of patients, median ages, interventions and outcomes.

All of the selected studies were evaluated by two reviewers [Long Chen and Xianhe Xie] according to The Cochrane Handbook for Systematic Reviews of intervention (Version 5.1.0), based on the following criteria: (1) Random sequence generation; (2) Allocation concealment; (3) Blinding of participants and personnel; (4) Blinding of outcome assessment; (5) Incomplete outcome data; (6) Selective reporting; (7) Other bias. Each trial for bias based on the criteria listed above was marked as ‘low risk’, ‘high risk’ or ‘unclear risk’. Trials were judged as low risk of bias (i.e. A rating) when all criteria were assessed as low risk; Trials were judged as moderate risk of bias (i.e. B rating) or high risk of bias (i.e. C rating) when one or more criteria were assessed as unclear risk or high risk, respectively.

Statistical analyses were performed using RevMan5.3. Chi-square and I-square tests were used to test the heterogeneity of different studies [29]; no heterogeneity was considered to exist when P > 0.1 and I2 < 50%, a fixed-effect model was applied to pool the study results. Significant heterogeneity was found if P < 0.1 and I2 > 50%, and a random-effects statistical model was used [30]. ORR, severe adverse events (Grade≥3) were analyzed using dichotomous variables. OS, CNS-TTP were calculated using effect variables. Hazard ratios (HRs) with 95% confidence intervals (CIs) were extracted from papers or from the survival curves when HRs were not available using the methods described by Zhou et al. [31] for CNS-TTP and OS. The event and total number of patients from TKI-group and non-TKI-group in the papers for object response rates (ORR) and severe adverse events, event-based relative risks (RR) with 95% CI were determined for ORR and severe adverse events extracted from 62.5% of the trials [21, 22, 26-28]. Publication bias was identified via funnel plot.

24. Cai L. et al. A comparative analysis of EGFR mutation status in association with the efficacy of TKI in combination with WBRT/SRS/surgery plus chemotherapy in brain metastasis from non-small cell lung cancer. J Neurooncol. 2014; 120:423-30.