MicroRNAs (miRNAs) are endogenous short non-coding RNA molecules that regulate gene expression by repressing translation or cleaving RNA transcripts in a sequence-specific manner. A growing body of evidence suggests that miRNAs are aberrantly expressed in many human cancers and that they play significant roles in the initiation, development and metastasis of human cancers. Genome-wide miRNA expression signatures provide information on the aberrant expression of miRNAs in cancers rapidly and precisely. Recently, studies from our group and others revealed that microRNA-1 (miR-1), microRNA-133a (miR-133a), microRNA-133b (miR-133b) and microRNA-206 (miR-206) are frequently downregulated in various types of cancers. Interestingly, miR-1-1/miR-133a-2, miR-1-2/miR-133a-1, and miR-206/miR-133b form clusters in three different chromosomal regions of the human genome – 20q13.33, 18q11.2 and 6p12.1, respectively. Here we review highlights of recent findings on the aberrant expression and functional significance of the miR-1/miR-133a and miR-206/miR-133b clusters in human cancers.

microRNAs (miRNAs) are a class of small non-coding RNA molecules consisting of 19–22 nucleotides that play important roles in a variety of biological processes, including development, differentiation, apoptosis, cell proliferation and cellular senescence [1-3].

miRNAs are evolutionarily conserved and located either within the introns or exons of protein-coding genes (70%) or in intergenic regions (30%) [4]. Most intronic and exonic miRNAs are derived from their host gene, suggesting that they are transcribed concurrently with their host transcript. The others are transcribed from intergenic regions or gene deserts as separate transcriptional units [4] (Figure 1). So far, 1527 human miRNAs have been registered at miRBase in release 18.0 ( http://microrna.sanger.ac.uk/). Despite the small size of these molecules through several intracellular processing [5], mature miRNAs broadly regulate gene expression through translational repression and mRNA cleavage, mainly due to the lack of a requirement for perfect sequence complementarity for target binding [6,7] (Figure 1). Bioinformatic predictions indicate that miRNAs regulate more than 30% of protein-coding genes [8].

The importance of miRNA in cancer was first recognized when miRNA genes were found to be specifically deleted in leukemia [9]. Subsequent reports have shown that miRNAs are differentially expressed in many cancers [10]. Although the biological functions of miRNAs remain mostly unknown, many recent studies suggest that miRNAs contribute to the initiation and development of various types of cancer [11,12]. Recent reports show that some miRNAs actually control the condition of major cancer-related signaling molecules [13], such as p53 family [13,14], retinoblastoma (Rb) [15] and epidermal growth factor receptor (EGFR) [16]. miRNAs can be separated into two main classes: those which are oncogenic and those which are tumor suppressive. Overexpressed miRNAs can act as oncogenes by repressing tumor suppressor genes, whereas underexpressed miRNAs can function as tumor suppressors by negatively regulating oncogenes [17-19]. 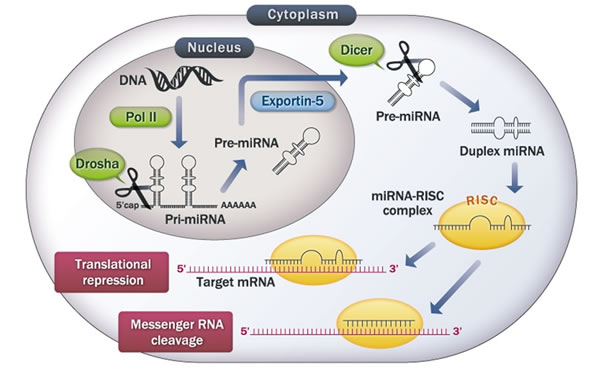 Figure 1: The microRNA biosynthetic pathway. miRNA genes are transcribed by RNA polymerase II (Pol II). The resulting long transcript is capped with a specially-modified nucleotide at the 5’ end, polyadenylated with multiple adenosines and spliced. The product is called primary miRNA (Pri-miRNA). Drosha crops Pri-miRNA into precursor-miRNA (Pre-miRNA). Pre-miRNA hairpins are exported from the nucleus to the cytoplasm by Exportin-5. In the cytoplasm, the pre-miRNA hairpin is cleaved by the RNase III enzyme Dicer. One strand is taken into the RNA-induced silencing complex (RISC), where the miRNA and its target interact. miRNAs that bind to mRNA targets with perfect matching induce mRNA cleavage, whereas translational repression is induced when matching is imperfect.

The miR-15a and miR-16 clusters, for example, are well known to act as tumor suppressors by targeting multiple oncogenes, including BCL2, MCL1, CCND1 and WNT3A [20], whereas the miR-17-92 cluster (also known as oncomiR-1) is recognized as oncogenic [21]. Many cluster miRNAs have been highly conserved over the course of evolution [22]. These facts indicate that miRNA clusters involve not only in normal biological process but also in development of cancers . 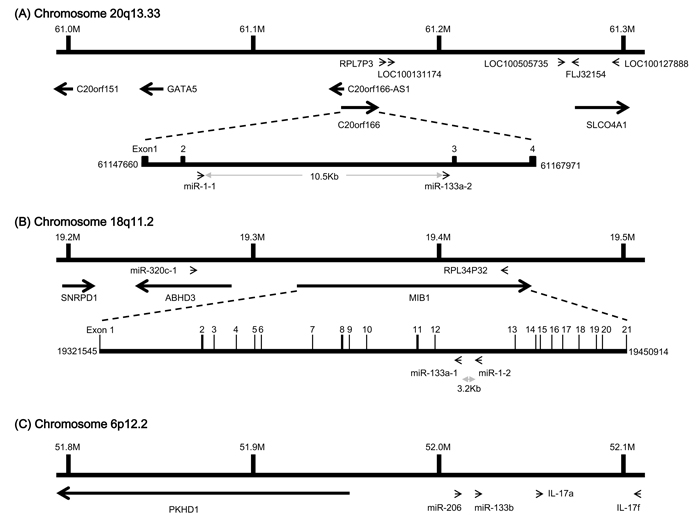 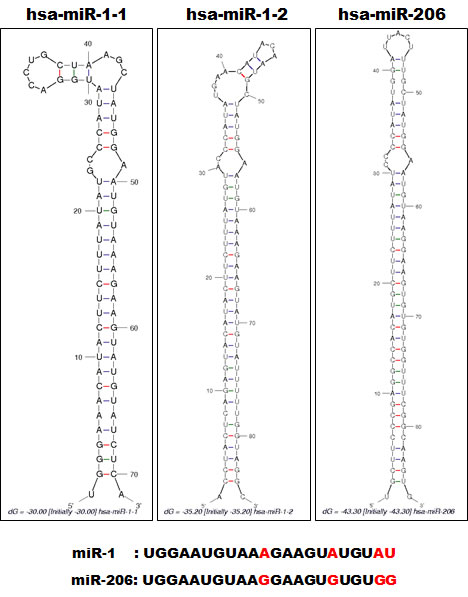 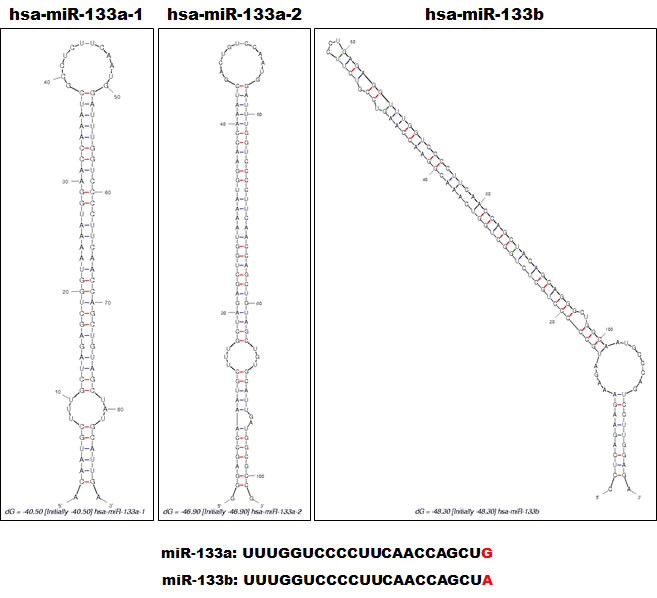 It has been reported that the expression of miRNAs located within 50Kb of one another is highly correlated across 24 different human organs, suggesting that 50Kb might be a useful functional definition of miRNA clusters [27]. It is not rare for miRNA clusters to have paralogues or homologues in other human chromosome regions [28]. It is well known that the miR-17-92 cluster (chromosome 13q31.3) has two paralogous clusters – miR-106a-363 (chromosome Xq26.2) and miR-106b-25 (chromosome 7q22.1). miR-17-92 cluster function as oncogenes in numerous cancers [21]. On the other hand, miR-106b-25 acts as an important regulator of neural stem cell proliferation and neuronal differentiation [29]. The miR-23a~27a~24-2 cluster (chromosome 19p13.13) has one homologue – miR-23b~27b~24-1 (chromosome 9q22.32), which are related to various human health and disease status [30].

Using high-throughput technology, such as miRNA oligonucleotide arrays and quantitative RT-PCR for validation, many studies have found associations between miRNA expression levels and tumor type, grade, response to treatment and prognosis [31-36]. These studies indicate the potential for miRNAs to serve as useful markers of disease state and prognosis and predictors of drug resistance. These high-throughput analyses have found miR-1, miR-133a, miR-133b and miR-206 to be altered in various types of cancers. Except for one report about multiple myeloma [37], studies on miR-1, miR-133a, miR-133b and miR-206 have found them all to be downregulated in many types of cancer (Table 1). We and other researchers have reported that the expression levels of miR-1 and miR-133a are significantly reduced in and correlated with maxillary sinus squamous cell carcinoma (SCC), renal cell carcinoma (RCC) and rhabdomyosarcoma (RMS) [38-40].

It is plausible that these miRNAs are silenced by epigenetic modification. DNA methylation-mediated miR-1 silencing was suggested in hepatocellular carcinoma (HCC) after treatment with 5-aza-cytidine [41], and methylation of an miR-1-1 promoter CpG island has been found frequently in primary colorectal cancer (CRC) and colorectal adenoma [42]. In lung cancer cells, miR-1 suppression might be caused by hypoacetylation of nucleosomal histones and not DNA methylation [43].

As noninvasive diagnostic tools, serum miRNAs have the potential to be fingerprints for diseases because human serum and plasma contain a number of stable miRNAs, and the differential expression patterns of serum miRNAs are intrinsic to a specific disease [47,48]. miR-1 may serve as a predictor for overall survival in non-small cell lung cancer (NSCLC). Low serum expression levels of miR-1 were found to be associated with poor prognosis in NSCLC [49]. Similarly, miR-206 expression levels in serum might be used to distinguish RMS from non-RMS tumors (sensitivity of 1.0 and specificity of 0.913) [50]. In a study of gastric cancer (GC), a combination of five serum miRNAs (miR-1, miR-20a, miR-27a, miR-34 and miR-423) was a better indicator for cancer detection than conventional markers, such as CEA and CA19-9 (sensitivity of 0.8 and specificity of 0.81) [51]. Expression of these five serum miRNAs was significantly higher in GC patients. Moreover, risk score values based on the expression of the five serum miRNAs was positively correlated with clinical stage [51].

As miR-1, miR-133a, miR-133b and miR-206 are mostly downregulated in cancers, gain-of-function experiments are a feasible way to evaluate the functional significance of these miRNAs in various cancers.

In acute myeloid leukemia (AML) cell lines, overexpression of miR-1 promotes cell proliferation, suggesting that miR-1 might act as an oncogene in hematologic malignancy [61]. It is interesting to note that the commonalities and differences in miR-1 function depend on the type of malignant cells.

To identify the biological processes or pathways potentially regulated by the miR-1/miR-133a and miR-206/miR-133b clusters, we performed GENECODIS analysis [81,82] with our predicted target list. The GENECODIS analysis revealed many signaling pathways (Figure 5). Several cancers, including PCa, pancreatic cancer, lung cancer, AML, RCC, CRC, BC and thyroid cancer, are among the statistically enriched categories (Additional Table 2), and it is worth mentioning that miR-1, miR-133a, miR-133b and miR-206 are differentially expressed in these types of human malignancies. This bioinformatic analysis indicates that the miR-1/miR-133a and miR-206/miR-133b clusters might supplement each other to regulate several cancer pathways, such as cell growth, cell apoptosis, cell cycle, invasion and angiogenesis (Additional Figure 1). Thus, cooperative gene regulation by miRNAs is an interesting subject , and it may change our understanding of miRNA-mRNA interactions. 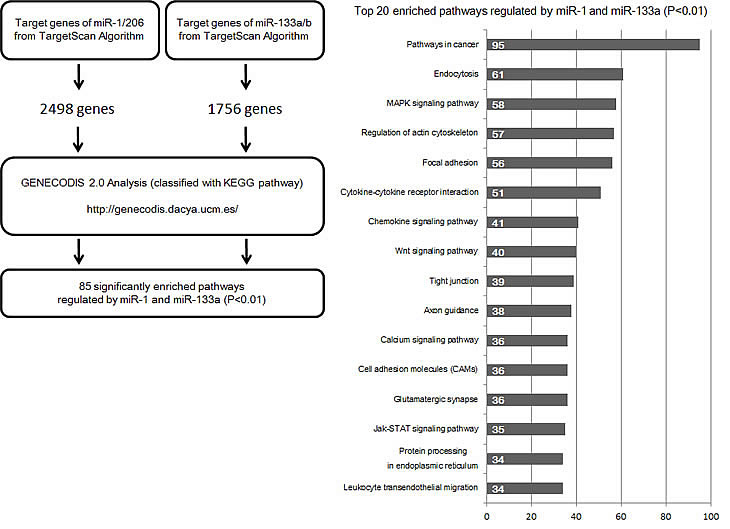 Figure 5: Workflow for the bioinformatic analysis of target genes of miR-1, miR-133a, miR-133b and miR-206. A total of 3716 genes were identified by the TargetScan program as predicted targets of miR-1, miR-133a, miR-133b and miR-206. The predicted target genes of miR-1 are the same as those of miR-206, and those of miR-133a are the same as those of miR-133b, due to the identical sequences of their seed regions. The genes were then analyzed and characterized in KEGG (Kyoto Encyclopedia of Genes and Genomes) pathway categories [93] by the GENECODIS program (Left). Twenty significantly enriched signaling pathways are shown in descending order of the number of genes contained in each pathway (Right).

miRNAs are important modulators of gene expression, and they contribute to a variety of biological processes, including proliferation, differentiation and apoptosis. The first evidence for their involvement in cancer was the finding in 2002 that some miRNAs are specifically deleted in leukemia . Thereafter, an enormous number of articles have been published about miRNAs and cancer. Today, nobody doubts that aberrant expression of miRNAs causes initiation, development and metastasis of human cancers.

Recently, studies from our group and others have shown that downregulation of the miR-1/miR-133a and miR-206/ miR-133b clusters are frequent events in various types of cancer. During evolution of the human genome, clustered miRNAs have developed important roles in maintaining the functions of the human body. Herein, we have reviewed the individual functions of these miRNAs and their regulated molecular targets in cooperation or independently . Elucidation of the intracellular molecular networks regulated by miRNAs is the current difficult challenge. Understanding of the molecular networks controlled by miRNA clusters may be exploited for future cancer treatment.