We recently reported a specific mechanism that RAD54B, an important factor in homologous recombination, promotes genomic instability via the degradation of p53 protein in vitro. However, clinical significance of RAD54Bin colorectal cancer (CRC) remains unclear. Thus we analyzed RAD54B geneexpression in CRC patients. Using the training set (n = 123), the optimal cut-off value for stratification was determined, and validated in another cohort (n = 89). Kaplan–Meier plots showed that distant recurrence free survival was significantly lesser in high RAD54B expression group compared with that of low expression group in both training (P = 0.0013) and validation (P = 0.024) set. Multivariate analysis using Cox proportional-hazards model showed that high RAD54B expression was an independent predictor in both training (hazard ratio, 4.31; 95% CI, 1.53–13.1; P = 0.0060) and validation (hazard ratio, 3.63; 95% CI, 1.23–10.7; P = 0.021) set. In addition, a negative significant correlation between RAD54B and CDKN1A, a target gene of p53, was partially confirmed, suggesting that RAD54B functions via the degradation of p53 protein even in clinical samples. This study first demonstrated RAD54B expression has potential to serve as a novel prognostic biomarker, particularly for distant recurrence in CRC patients.

Despite the recent progress in the therapeutic modalities, colorectal cancer (CRC) is a serious public health issue worldwide owing to its high incidence and cancer-related mortality [1]. In addition to TNM staging system, several biomarkers are currently applied to practical use for CRC patients. For example, UGT1A1 genetic polymorphism is associated with CPT-11 toxicity [2]. KRAS/NRAS mutations status predicts response to anti-EGFR antibody therapy [3, 4]. CRC with microsatellite instability has a better prognosis compared to CRC with intact mismatch repair [5]. Such biomarkers have improved clinical outcomes in CRC, however, the number of biomarkers still remains insufficient, and more studies exploring new biomarkers are required to establish further personalized therapeutic strategy.

Human RAD54B was first identified in 1999 as a homolog of RAD54. RAD54B belongs to SNF2/SWI2 superfamily, and biochemical studies have shown that RAD54B is involved in the homologous recombination (HR) [6-9]. HR is one of the most important DNA double-strand break repair pathway. It is generally accepted that imbalanced regulation of the HR system is associated with genomic instability, resulting in carcinogenesis and malignant tumor development [10-12].

Recently, our group found another mechanism different from the HR repair pathway in multiple cell line experiments, including the HCT116 colon cancer cell line. RAD54B is associated with cell cycle control and functions as a scaffold for p53 degradation through its direct interaction with the MDM2–MDMX ubiquitin–ligase complex, and constitutive upregulation of RAD54B activity promotes genomic instability [13]. Although one study concerning the effectiveness of capecitabine and concurrent radiation therapy for glioblastoma analyzed the expression profiles of eight genes including RAD54B and reported that high RAD54B expression was associated with a poor outcome [14], the clinical significance of RAD54B expression remains unknown particularly in CRC.

Therefore, we examined RAD54B expression in surgically resected CRC tissues by real-time PCR method and analyzed the correlation with various clinicopathological factors and patient’s prognosis. In addition to RAD54B, we also analyzed RAD51 expression in the same cohort because RAD51 is another important factor involved in HR process [15-18] and several studies reported that RAD51 protein overexpression is associated with poor prognosis in various cancers [19-24]. Moreover, we measured CDKN1A (p21/WAF1) expression, a target gene of p53, and analyzed the association between RAD54B and CDKN1A expression to investigate the biological role of RAD54B in clinical samples. From a clinical perspective, this is the first study demonstrating the utility of RAD54B as a prognostic biomarker in CRC patients.

RAD54B expression was elevated in most CRC tissues 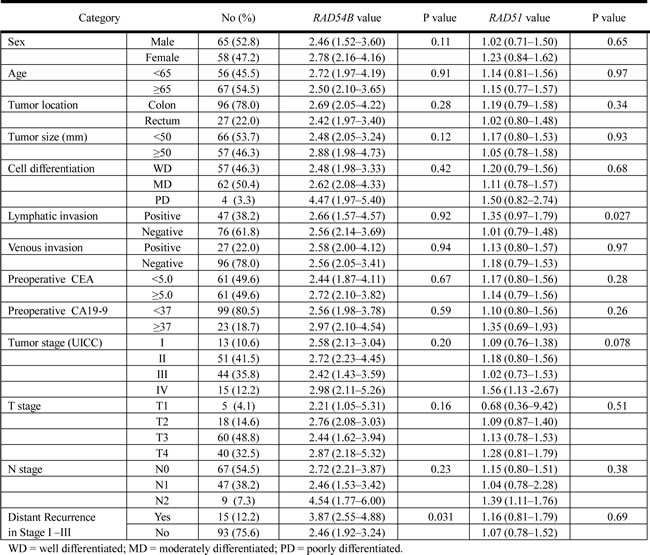 RAD54B and RAD51 expression and patient prognosis in the training set

Among the 108 stage I–III CRC patients (excluding stage IV patients) in the training set, 15 patients developed distant recurrence during the median follow-up period of 50.7 (40.9–59.9) months (Table 2). RAD54B expression values in patients developing distant recurrence were significantly higher than those in patients without distant recurrence [3.87 (2.55–;4.88) vs. 2.46 1.92–;3.24); P = 0.031; Table 2], suggesting that high RAD54B expression is associated with inferior prognostic outcome, specifically by causing postoperative distant metastasis. In contrast, RAD51 expression values were not significantly different between patients with and without distant recurrence [1.16 (0.81–;1.79) vs. 1.07 (0.78–;1.52); P = 0.69; Table 2]. According to these findings, we selected DRFS as the primary endpoint to further evaluate the prognostic ability of RAD54B. 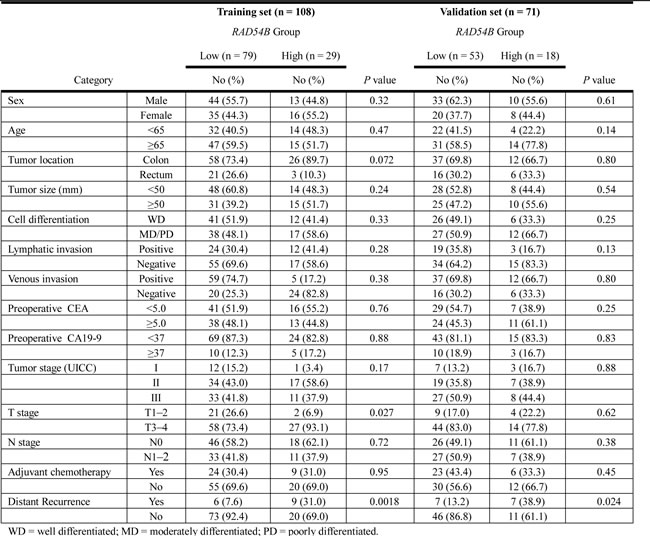 Kaplan–Meier survival analyses of 108 stage I–III CRC patients in the training set revealed that the RAD54B high group had inferior DRFS compared with the low group (estimated 3-year DRFS was 93.5% in the low group and 68.5% in the high group; P = 0.0013; Figure 2A). Multivariate analysis using the Cox proportional-hazards model showed that high RAD54B expression was the only independent prognostic factor associated with DRFS in the training set (hazard ratio, 4.31; 95% CI, 1.53–13.1; P = 0.0060; Table 4).

Table 4: Univariate and multivariate analysis of the factors associated with DRFS. 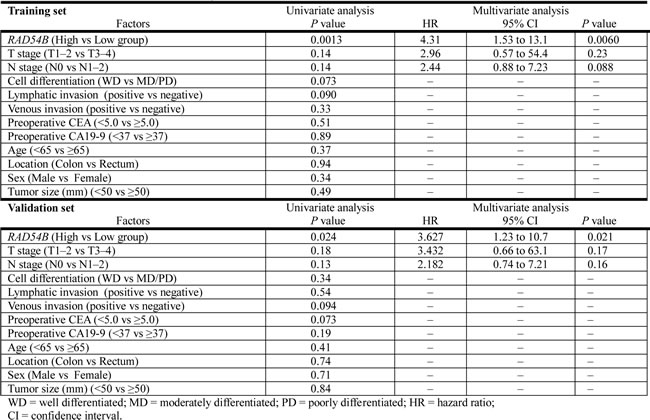 RAD54B expression in the validation set

Next, the RAD54B expression cut-off value of 3.63 determined in the training set was applied to the independent cohort of 89 CRC patients for validation. Seventy-one stage I–III CRC patients (excluding stage IV patients) in the validation set were stratified into the RAD54B low (n = 53) and high (n = 18) expression groups. Table 3 shows that clinicopathological factors including UICC stage, T stage, and N stage were not significantly different in the two groups. During the median follow-up period of 37.0 (28.5–46.0) months, seven patients (13.2%) in the RAD54B low group (n = 53) and seven patients (38.9%) in the high group (n = 18) developed distant recurrence (Table 3, P = 0.024). Kaplan–Meier survival analyses revealed that the RAD54B high group had inferior DRFS compared with the low group with (estimated 3-year DRFS was 85.7% in the low group and 61.1% in the high group; P = 0.024; Figure 2B). Multivariate analysis using the Cox proportional-hazards model showed that high RAD54B expression was an independent prognostic factor associated with DRFS even in the validation set (hazard ratio, 3.63; 95% CI, 1.23–10.7; P = 0.021; Table 4).

We next studied the relationship between RAD54B and p53 functions in clinical CRC samples. Because p53 activates CDKN1A gene transcription and its expression reflects the functional status of p53 protein [25, 26], the CDKN1A expression was measured and compared with that of RAD54B. This analysis was limited to samples without any p53 hotspot mutations observed in CRC because most of such p53 mutants lack the normal transcriptional activities [27, 28]. Using sequencing analysis of the p53 gene, 92 samples without p53 hotspot mutations were extracted from the combined training and validation set (n = 212). Our data showed that CDKN1A expression tends to decrease remarkably in CRC samples which expression of RAD54B are within an approximately 3-fold increase compared with normal mucosa. Particularly, in samples with RAD54B expression values ranging between 1.00–2.95, Spearman’s rank-order correlation demonstrated a significant weakly negative correlation between CDKN1A and RAD54B expression (ρ = −0.29, P = 0.027; Figure 3A).

The degradation of p53 caused by RAD54B requires the interaction between p53 and MDM2 [13]. A study reported that p53 has a sequence polymorphism resulting in either Pro or Arg at amino acid position 72, and that although both variants can equivalently transactivate CDKN1A, the Arg72 variant undergoes ubiquitination markedly better than the Pro72 variant via greater interaction with MDM2 [29]. Therefore we analyzed the sequence of amino acid position 72 and the correlation between RAD54B and CDKN1A expression. The analysis limited to 34 samples with Arg72 in 92 samples without p53 hotspot mutations revealed that there was a more remarkably significant negative correlation between RAD54B and CDKN1A expression provided RAD54B expression values were under 6.00 (ρ = −0.44, P = 0.0099; Figure 3B).

Meanwhile, the difference of clinical influence between RAD54B and RAD51 expression implies another pathway other than the HR, where RAD54B functions as a negative prognostic factor. Based on our in vitro study that RAD54B enhances p53 protein degradation via the MDM2–MDMX ubiquitin–ligase complex [13], we analyzed CDKN1A expression, a target gene of p53, to elucidate the biological role of RAD54B in clinical CRC tissues. The analysis limited to CRC samples with Arg72 showed a significant inverse correlation between RAD54B and CDKN1A expression. This result partially supports the mechanism that RAD54B functions via the degradation of p53 protein function in clinical CRC tissues. However, we could not detect a significant correlation between RAD54B and CDKN1A expression in samples with remarkably high RAD54B expression, implying the presence of another unknown mechanism causing poor prognosis.

Several studies reported that RAD51 overexpression induced tumor resistance to ionizing radiation and anticancer drugs in vitro [32-34]. As for RAD54B, we previously found that xenografts derived from RAD54B knock out HCT116 cells grew more slowly than that from wild-type HCT116 cells after either oxaliplatin or 5-FU treatment in nude mice [13]. These results suggests the possibility that the effect of chemotherapy attenuates by RAD54B overexpression, and suggests the potential therapeutic target such as blocking the RAD54B overexpression to reinforce the effect of the chemotherapy. Unfortunately, in the present study, we were not able to prove statistically the association between RAD54B expression and the effect of adjuvant chemotherapy consisting mainly of 5-FU based regimens probably because of our limited number of patients. We will further examine the effect of RAD54B expression on chemotherapy by accumulating more CRC patients.

Limitations to the present study should be noted. First, the samples were obtained from a single institution and the sample size was not large enough for subgroup analysis. Second, the follow-up period may have been relatively short. Third, this was a retrospective study. A large, prospective cohort study would be desirable to determine the clinical usefulness of RAD54B more accurately.

In conclusion, this study is the first report clinically demonstrating the importance of RAD54B as a prognostic biomarker in CRC patients. An increased expression level of RAD54B may serve as an independent predictor of poor outcome in CRC patients treated with surgical resection, particularly for distant metastasis. Postoperative recurrence risk stratification by RAD54B expression will be beneficial for more individual cancer strategies.

A total of 212 consecutive CRC samples were analyzed. All patients undergoing surgical resection were pathologically diagnosed with CRC at University of Tokyo Hospital, Tokyo, Japan. Samples obtained between 2008 and 2010 were included in the training set (n = 123), whereas those obtained between 2011 and 2012 were included in the validation set (n = 89). To prevent the influence of preoperative therapy on the targeted gene expression in resected specimens, patients receiving any preoperative chemotherapy or radiotherapy were excluded from the study.

A detailed database containing clinical and pathological information was provided for statistical analysis, and survival data were acquired from clinical charts. The cancer histological grade and clinical stage were identified in accordance with the 7th edition of the TNM classification of Union for International Cancer Control (UICC). The study protocol was approved by the ethics committee of The University of Tokyo Hospital, and written informed consent was obtained from all partici­pating patients.

cDNA sequencing of the p53 gene

For sequencing of p53 gene transcripts, cDNA of the tumor tissue was amplified with PrimeSTAR HS DNA Polymerase (TAKARA BIO INC). Primer sets covering the regions from the first ATG to Gln167 and from Arg156 to Pro301 were used to detect the amino acid polymorphism at position 72 and CRC hot-spot mutations, respectively [29, 36]. Direct cDNA sequencing of each PCR product was performed using BigDye terminator v3.1 (Life Technologies) on a 3100 Genetic Analyzer (Life Technologies). The following sets of primers were used: ATG–Gln167, 5′-GTGACACGCTTCCCTGGAT-3′ and 5′-CTCACAACCTCCGTCATGTG-3′ and Arg156–Pro301, 5′-GTGCAGCTGTGGGTTGATT-3′ and 5′-CAGTGCTCGCTTAGTGCTCC-3′.