Endoscopic retrograde cholangiopancreatography (ERCP) is currently the first choice for the clinical diagnosis and treatment of biliary and pancreatic diseases. However, while ERCP has been widely applied in the outpatient setting due to physicians’ proficiency in this technique, the incidence of postoperative complications remains high. Duodenal perforation is one of the most serious complications of ERCP, with an incidence of approximately 1% and a mortality rate of 4.2%–29.6% [1]. Therefore, diagnosing the perforation as early as possible, assessing the extent of injury, and selecting appropriate treatment options are significant concerns.

According to Stapfer et al [2], duodenal perforation is classified into the following four types: type I, perforation of the medial and lateral duodenal wall, caused by improper endoscopic technique, which is usually large and can easily lead to intra-abdominal or retroperitoneal leakage so that immediate surgery is necessary; type II, periampullary damage, which should be diagnosed by upper gastrointestinal imaging or CT scan to determine the extent of leakage; type III, involving the distal bile duct, usually caused by the guidewire or stone basket and resulting in a small perforation; and type IV, microperforation with retroperitoneal gas accumulation as the only manifestation, requiring nonsurgical treatment in most cases.

Until now, the optimum treatment methods for duodenal perforation have not been established. Usually, nonsurgical or conservative management is preferred for type II and III injuries. However, this decision should be cautiously made, as nonsurgical treatment failure can cause serious and even life-threatening complications.

A 49-year-old female was admitted for persistent abdominal pain and fever of 1 week’s duration. MRCP showed multiple common bile duct stones with accompanying duct dilatation. After admission, antibiotics were administered and ERCP was performed the following day. After successful intubation, ERCP revealed choledochectasia with multiple stones (maximum diameter 1.6 cm × 1.5 cm). After routine EST, papillary sphincter dilatation was performed. Due to the larger size of the stones, lithotripsy and a stone-removal basket (Boston Scientific, Marlborough, MA, USA) were used to break and extract the stones. Repeat cholangiography demonstrated no residual stones; however, abnormal perinephric gas shadowing was observed (Figure 1). Under the duodenal endoscopy, an approximately 2.0 cm × 1.5 cm perforation was visualized on the lateral duodenal wall, with visible retroperitoneal loose connective tissue (Figure 2). We suspected that because the stone basket was over-rigid, it could have penetrated the contralateral intestinal wall due to inertial forces during stone removal. 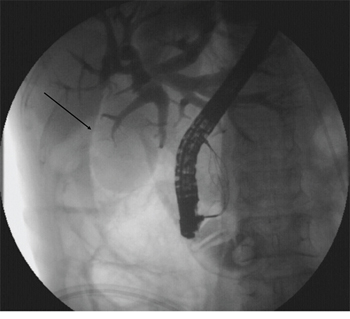 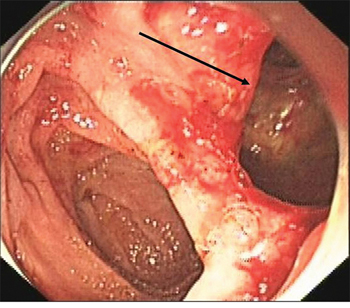 An Olympus double-lumen endoscope (Olympus, Center Valley, PA, USA) was used to attempt repair; however, the diameter of the injury was too long. A titanium clip was used to attempt closure of the perforation, but this technique failed. Therefore, an endoscopic purse-string suture was employed. First, the double-lumen endoscope was used to observe the location, size, and appearance of the injury. Then, the following steps were taken: (1) a nylon ring and a titanium clip were inserted along the double channels of the endoscope; (2) after adjusting the angle and location of the nylon ring and titanium clip, the first titanium clip was used to hold the distal end of the nylon ring vertically, firmly approximating the normal mucosa at the distal edge of the defect, and fixing it by deploying the clip (Figure 3); (3) several titanium clips were placed along the nylon string, around the perforation; (4) the last clip was inserted to hold the proximal end of the nylon ring, approximating and fixing it to the normal mucosa at the proximal edge of the defect; and (5) the nylon ring was retracted to draw the distal and proximal edges of the mucosa of the wound together. Endoscopy demonstrated that the perforation had been successfully closed (Figure 4). Postoperatively, a jejunal feeding tube and gastrointestinal decompression tube were placed; she was maintained on bowel rest and placed on antibiotics. Two days later, her abdominal pain was relieved, her abdominal tenderness was significantly reduced, and no rebound tenderness was demonstrated on examination. Subcutaneous emphysema was absorbed after 5 days. Enteral nutrition was initiated 5 days postoperatively. As there was no free intraperitoneal air on plain radiographs 10 days postoperatively, the gastrointestinal decompression tube was removed. After 3 weeks, the jejunal feeding tube was removed and the patient was discharged. At her 2-month follow-up visit, she had no complaints or symptoms. 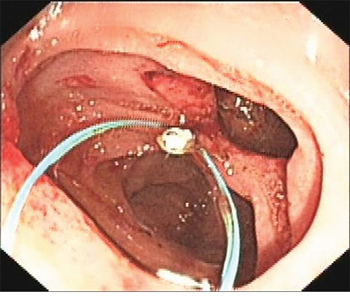 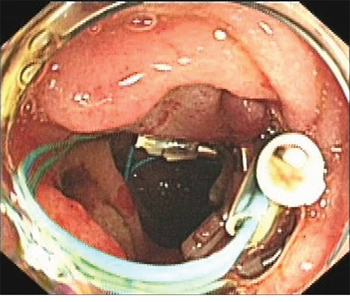 Figure 4: Complete closure of the perforation.