Colorectal adenocarcinoma is a common cause death cancer in the whole world. The aim of this study is to define the 111In-cetuximab as a diagnosis tracer of human colorectal adenocarcinoma. In this research, cell uptake, nano-SPECT/CT scintigraphy, autoradiography, biodistribution and immunohitochemical staining of EGF receptor were included. HCT-116 and HT-29 cell expressed a relatively high and moderate level of EGF receptor, respectively. The nano-SPECT/CT image of 111In-cetuximab showed tumor radiation uptake of subcutaneous HCT-116 xenograft tumor was higher than SW-620. Autoradiography image also showed that tumor of HCT-116 had high 111In-cetuximab uptake. Mice that bearing CT-26 in situ xenograft colorectal tumors showed similar high uptake in vivo and ex vivo through nano-SPECT/CT imaging at 72 hours. Metastatic HCT-116/Luc tumors demonstrated the highest uptake at 72 hours after the injection of 111In-cetuximab. Relatively, results of 111In-DTPA showed that metabolism through urinary system, especially in the kidney. The quantitative analysis of biodistribution showed count value of metastatic HCT-116/Luc tumors that treated with 111In-cetuximab had a significant difference (P < 0.05) compared with that treated with 111In-DTPA after injection 72 hours. Result of immunohistologic staining of EGF receptor also showed high EGF receptor expression and uptake in metastatic colorectal tumors. In summary, we suggested that 111In-cetuximab will be a potential tool for detecting EGF receptor expression in human metastatic colorectal carcinoma.

Colorectal adenocarcinoma is a common cause of cancer death in the whole world. Patients of colon cancer often have no symptom in early stage, but once diagnosed that always have poor treatment effect in the third or fourth late stage. [1–4] Especially, the metastasis of colorectal cancer always caused the worst symptoms. [5] However, early screening can reduce mortality of colorectal cancer.

The over expression of epidermal growth factor (EGF) receptor was found in some patients of colon cancer. [6] Cetuximab had been reported that could specifically target cells expressing EGF receptor for treatment. [7–9] EGF receptor is associated with the control of cell survival, cell cycle, angiogenesis, and other metastasis related signaling pathway including cell migration and cell invasion. [7–13] Cetuximab is a chimeric monoclonal IgG1 antibody that directed against epidermal growth factor and inhibits its activation, which then leading to the inhibition of tumor cell growth and the induction of apoptosis. [14–16] Compared with its affinity to the endogenous substrates, EGF receptors have a 5 to 10 times higher affinity to Cetuximab. [17] It also inhibits the generation of the generation of the angiogenic factor, and blocks endothelial cell migration, thereby reducing tumor angiogenesis and metastasis. [9, 18] Many researches have shown that cetuximab can be used for targeting tumor cells that express the epidermal growth factor receptor, and execute the cytotoxic effect. [14–16, 18] Cetuximab does not bind to HER family. [18] 111In (half-life = 2.83 days, r-ray = 0.2454 MeV) is usually used in labeling cetuximab for the disease diagnosis, such as head and neck cancer. [19, 20] 111In was as an image tracer with the cetuximab antibody in this study.

In this study, initial we used 111In labeled cetuximab to target EGF receptors in subcutaneously induced human colon tumor, and then further applied it for the diagnosis of human metastatic colorectal adenocarcinoma (Figure 1). We considered that 111In-cetuximab can be used for the diagnosis of human metastatic colon cancer, and then providing enhanced therapeutic effect.

In vitro cell uptake of cetuximab

For all studies in this report, 111In-cetuximab with high radiochemistry purity (> 95%) was used (Figure 3). The nano-SPECT/CT image of mice bearing subcutaneous tumors showed that HCT-116 tumor (on the right flank of the mouse) had higher uptake of 111In-cetuximab than SW-620 tumor (left flank) 24 hours after the intravenous injection of 111In-cetuximab (Figure 4A). Similar to other nanoparticles, it was inevitable that the liver had high uptake due to the reticuloendothelial system (RES) function. HCT-116 tumors demonstrated the highest uptake at 48 hours, while the uptake of SW-620 tumors still remained very low, which was corresponded with the different EGF receptor expression level of HCT-116 and SW-620. Results of autoradiography images also showed that tumor of HCT-116 had higher 111In-cetuximab uptake after 72 hours injection of 111In-cetuximab (Figure 4B). 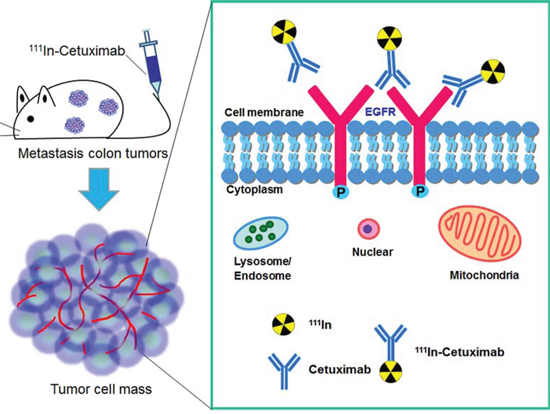 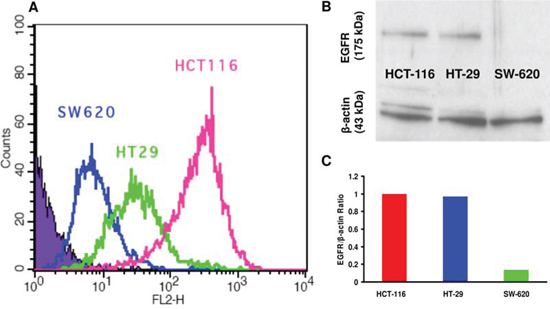 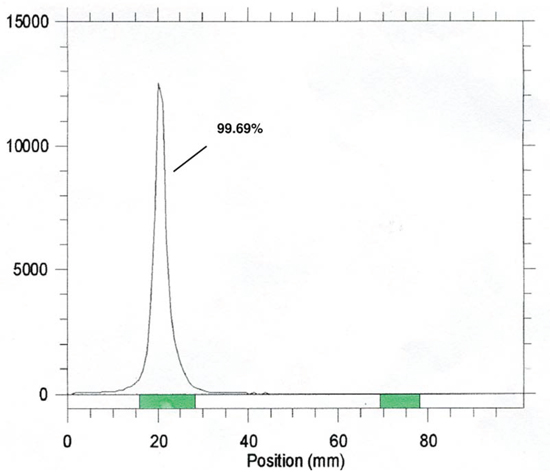 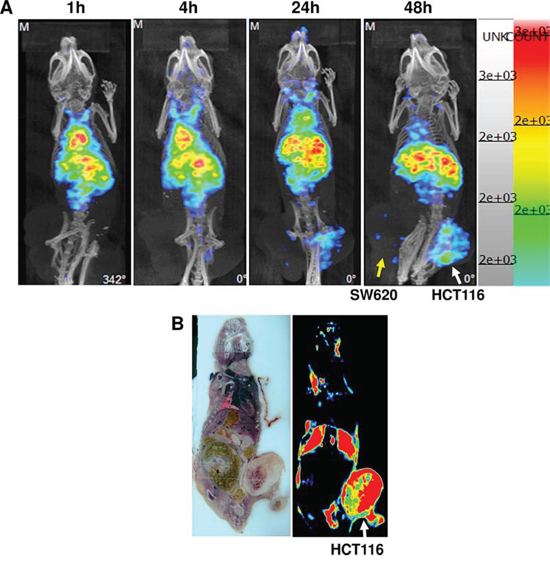 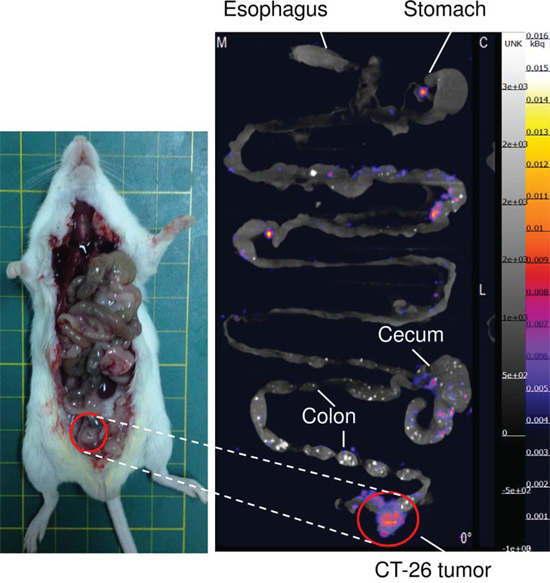 In studies of in vivo tumor uptake by using the subcutaneous colorectal tumor-bearing mice model, the nano-SPECT/CT and autoradiography images both revealed higher radiation uptake in HCT-116 tumors than SW-620 tumors at 24 to 48 hours after the intravenous injection of 111In-cetuximab (Figure 4). Similar result was also observed in the head and neck cancers. [21] These results also corresponded with that the application of 111In-cetuximab targeting demonstrated a higher EGF receptor expression in HCT-116 than in SW-620 cells. 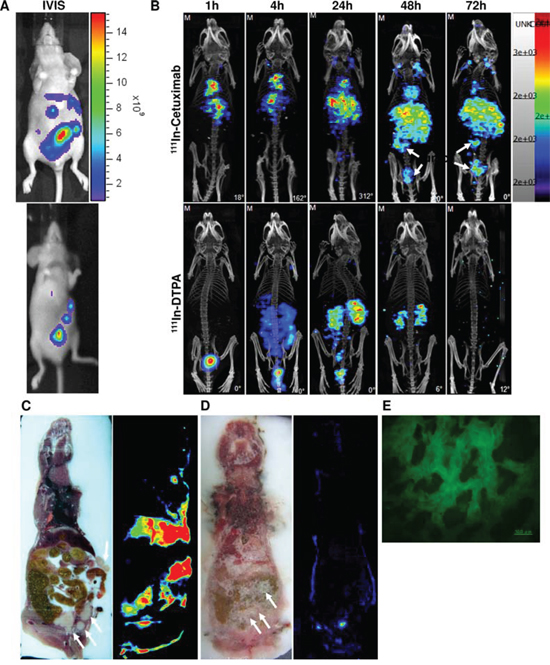 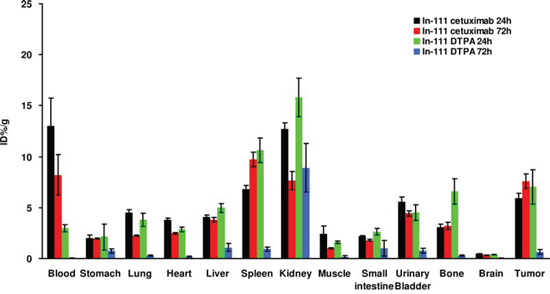 In our studies, the spleen uptake of 111In-cetuximab was significantly higher at 72 hours than at 24 hours (Figure 6). That’s because cetuximab is a monoclonal antibody with molecular weight about 150 kDa, which resulting that this macromolecule could been filtered by reticuloendothelial system (like spleen and liver). [19, 20] Hence, the spleen uptake of 111In-cetuximab was increased until 72 hours. Therefore, the 111In-cetuximab would be an effective diagnostic agent and clearly detect EGF receptor-highly expressed metastatic colon tumors even tumors were in the abdominal cavity.

The monolayer of HCT-116, HT-29 and SW-620 cells was washed with PBS and incubated with trypsin-EDTA at 37°C for 5 min. The cells were collected and re-suspended in medium. Survival of all cells was counted using a trypan-blue dye exclusion assay. The cell number in the suspension was adjusted, and 1 × 106 cells in 100 μl of medium were used for the cellular uptake test. After incubating the samples with PE-conjugated mouse anti-human EGF receptor antibody (BD Pharmingen) for 20 min at 37°C in a humidified incubator (5% CO2), the cells were washed twice with 3 mL of PBS to remove unbound antibody by centrifugation for 5 min. The cell suspensions were analyzed immediately by the flow cytometry.

HCT-116, HT-29 and SW-620 cells were lysed in RIPA buffer. The cell lysates were centrifuged at 12, 000 rpm for 15 minutes to pellet the cell debris. The cleared lysates (containing 30 μg of protein) were separated on 8% SDS polyacrylamide gels and transferred onto polyvinylidene difluoride membranes (Millipore). After blocking, the membranes were incubated with polyclonal antibody against human EGF receptor (Santa Cruz Biotechnology) at 4°C overnight, followed by a second antibody labeled with horseradish peroxidase (HRP), and developed with enhanced chemiluminescence (ECL) reagents (Santa Cruz Biotechnology). The signals on the blots were scanned and analyzed using the UVP imaging system (BioSpectrum® Imaging System). Each value is shown as an arbitrary unit (AU), and is representative of at least two independent experiments.

Cetuximab was conjugated with DTPA to produce DTPA-cetuximab. 111InCl3 (370 MBq) was diluted in 100 μL of 0.2 M sodium acetate buffer (pH 5.5) and add to 100 μg of DTPA-cetuximab. The reaction mixture was incubated for 1 hour at 37°C with constant shaking. 111In-cetuximab was generated at an average yield of ~ 80%, and the radiochemical purity was > 85% in this study.

We used six to eight weeks old nude mice that were xenografted subcutaneously in the right and left hind leg with the human HCT-116 and SW-620 cell lines (3 × 106 cells), respectively. In situ colorectal tumor of CT-26 cell (3 × 105 cells) was xenografted into rectum of mice by small animal endoscopy. In addition, metastatic colorectal tumors was xenografted HCT-116/Luc cells (3 × 106 cells) into abdominal of nude mice. Tumors with a mean volume of 100–300 mm3 were used in the experiments. Animals were housed in filter-topped cages in a specific-pathogen-free unit in accordance with INER institutional guidelines.

The metastatic colorectal tumor-bearing nude mice were were injected Luciferin with an IVIS imaging system (Xenogen, Alameda, CA, USA) for detection the tumor.

HCT-116/Luc bearing abdominal nude mice whole body of 111In-cetuximab and 111In-DTPA after injected 72 hours were collected, frozen, and embedded in OCT compound after the nano-SPECT/CT studies. The follow steps described as above paragraph.

The biodistribution of 111In-cetuximab and 111In-DTPA was studied by injecting intravenously through a tail vein of HCT-116/Luc bearing metastatic colon tumor mice. The tumor-bearing mice were sacrificed at 24, and 72 hours after the 111In-cetuximab and 111In-DTPA were injected, and then the blood, smooth, lung, heart, liver, spleen, kidney, muscle, small intestine, urinary bladder, bone, brain and tumors were collected, and the uptake of radioactivity was measured by a gamma counter. Tissue distribution data were expressed as the percentage of injected dose per gram tumor tissue (ID%/g).

After 111In-cetuximab autoradiography of metastasis abdominal colon tumor, the tumors were taken out from mice, then sections. In staining procedure, the slides were fixed in acetone at 4°C for 10 minutes. Rabbit anti EGF receptor primary antibody (Anti-EGFR affinity isolated antibody, SIGMA, China) was used to detect EGF receptor expression incubation at 4°C overnight, and then washed and used broad secondary antibody for 20 minutes. Next washed and used HRP for 10 minutes. Finally, washed and DAB was used for 3 minutes for visualization.

All data are expressed as mean ± standard deviation. The significance of difference in this study between 111In-Cetuximab and 111In-DTPA two groups was analyzed by the t-test. Result value of P < 0.05 was considered as statistically significant between experiment group and control group.