The majority of MYC studies focus on its function in cancer due to the critical role of MYC in human cancer [5]. MYC is primarily overexpressed and/or amplified in numerous types of cancer through various mechanisms such as retroviral transduction and MYC translocation [4, 5, 8]. In addition, posttranscriptional regulation of MYC also contributes on the overexpression of MYC in cancer. For instance, the stability of MYC protein modulated by phosphorylation is regulated by promyelocytic leukemia zinc finger (PLZF) protein and long noncoding RNA PVT1 [9, 10].

Of the various members of noncoding RNAs, long noncoding RNAs (lncRNAs) are characterized by their size (larger than 200 nucleotides). Recently, many studies have revealed versatile functions of lncRNAs in gene expression modulation through various routes such as transcriptional, posttranscriptional, posttranslational and epigenetic regulation [10, 11]. Differential expression of the lncRNAs in various diseases implies the potential role of lncRNAs as therapeutic targets in the diseases [12]. Likewise, a cohort of lncRNAs has been reported and investigated in cancer. For instance, 8 CCAT family members from CCAT1 (CARLo-5) to CCAT8 were identified in colorectal cancer (CRC) [13–16]. Numerous PCAT family members were also found in prostate cancer [17]. In addition, a few lncRNAs such as BCAR4 and HOTAIR have a role in cancer metastasis [18, 19].

Identification of lncRNAs repressed by MYC

Recently, we identified lncRNAs dysregulated by MYC [13]. By profiling lncRNA expression in CRC, we found that about 7% of lncRNAs are dysregulated in CRC and that 1060 lncRNAs are downregulated in CRC (Figure 1a) [13]. Because MYC is overexpressed in the CRC cells and tissues used in the previous study, a part of the lncRNAs could be repressed by MYC. To further verify the repression of the lncRNAs by MYC, we also identified lncRNAs upregulated by MYC knockdown in HCT116 (Figure 1b) and RKO (Figure 1c) [13]. The comparison of the 3 categories shows 2 lncRNAs commonly found in the all 3 categories, namely AK098037 and LPP-AS2 (Figure 1d).

As shown in our previous lncRNA identification, predicted sequences of lncRNAs differ frequently with the actual sequences [13, 16]. Using rapid amplification of cDNA ends (RACE), we investigated the actual sequences of those lncRNAs (Figure 1e–1g). As shown, the 2 lncRNAs are shorter than the predicted sequences. In addition, we found that LPP-AS2 is expressed as 2 different lncRNAs (Figure 1f & 1g). Here we call these MYC-repressed lncRNAs, MYCLo-4 (AK098037, chromosome 9), MYCLo-5 (LPP-AS2-1, chromosome 3) and MYCLo-6 (LPP-AS2-2, chromosome 3) (Figure 1h & 1i). We also confirmed the expression of the lncRNAs by using Northern blot (Figure S1). Of the lncRNAs, MYCLo-5 is expressed as two variants, MYCLo-5 v1 and MYCLo-5 v2 (Figure 1i).

MYC is frequently amplified and/or overexpressed in various types of cancer. By using Taqman assay, we tested the repression of MYCLo-4∽6 by MYC in various cancer types. Of the tested cell lines, MYCLo-4 was upregulated by MYC knockdown in HCT116 (CRC), RKO (CRC), HT29 (colorectal adenocarcinoma), A549 (Lung carcinoma) and PC3 (prostate cancer) (Figure 2a). The other 2 lncRNAs, MYCLo-5 and -6 were also induced by MYC repression in various cancer types such as CRC (HCT116, RKO and HT29), lung cancer (A549), prostate cancer (PC3), breast cancer (MCF7 and SKBR3) and hepatocellular carcinoma (SK-HEP-1 and HepG2) (Figure 2b & 2c). These results indicate that MYCLo-4∽6 are common targets of MYC not only in CRC but also in other types of cancer.

Identification and characterization of promoters of MYCLo-4∽6 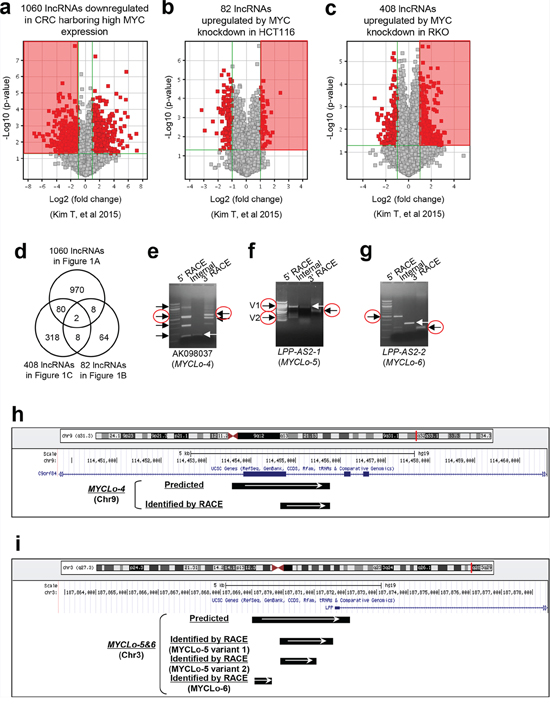 Figure 1: Identification of MYC-repressed lncRNAs. a. Heatmap of lncRNAs dysregulated in CRC. LncRNAs downregulated in CRC with high MYC expression are highlighted with a red-colored box. b. and c. Heatmaps of lncRNAs dysregulated by MYC knockdown in HCT116 (b) or RKO (c). LncRNAs upregulated by MYC knockdown are highlighted with a red-colored box. d. Venn diagrams showing the number of downregulated lncRNAs in a MYC-dependent manner. e–g. 5′ (left lane) and 3′ (right lane) RACE and amplification of internal region (middle lane) covering the both starting points of 5′ and 3′ RACE. Black arrows indicate appropriate 5′ and 3′ RACE products and white arrows indicate PCR products of the internal region. The bands were confirmed by direct sequencing. The arrows circled in red indicate PCR products of the sequence deposited in GenBank. h. and i. Schematics of MYCLo structures and genomic localizations.

Figure 2: Confirmation of MYC-mediated regulations of MYC-repressed MYCLos in various cancers. a–c. qRT PCR results showing MYC-mediated negative regulation of MYCLo-4 (a), -5 (b) and -6 (c) in various types of cancer cells. Data are mean ± S.D. of three independent experiments and each measured in triplicate (**, p < 0.05; *, p = < 0.01). 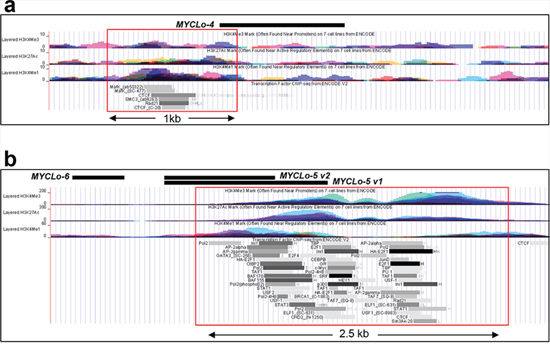 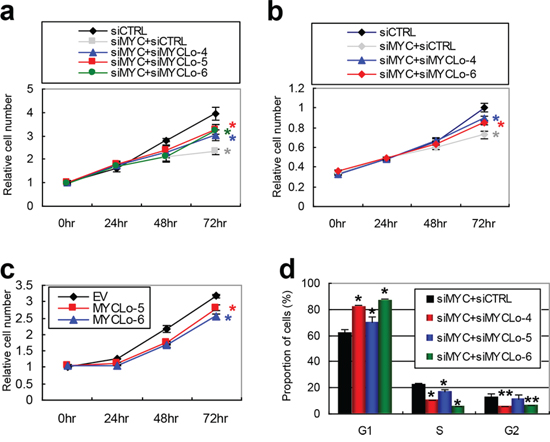 To identify the cell cycle regulators modulated by the MYC-repressed MYCLo-4, -5 and -6, we profiled the expression of 183 cell cycle regulator genes using the nCounter Virtual Cell Cycle Gene Set from NanoString Technologies (Materials and Methods). We identified 32 genes, 17 genes and 52 genes significantly dysregulated by knockdown of MYCL-4, -5 or -6, respectively (more than 1.5 fold change, p-value < 0.05) (Figure 5a–5c, Tables S1-S3). Most of the dysregulated genes among the 183 cell cycle regulators are repressed by knockdown of the MYC-repressed MYCLos, suggesting that MYC-repressed lncRNAs modulate the cell cycle by enhancing the expression of cell cycle-related genes. By comparing the genes regulated by MYC (Figure 5d, Table S4), we further identified subsets of genes commonly regulated by MYC and the MYCLos under our selection criteria (more than 1.5 fold change, p-value < 0.05), as indicated in Figure 5a–5c. 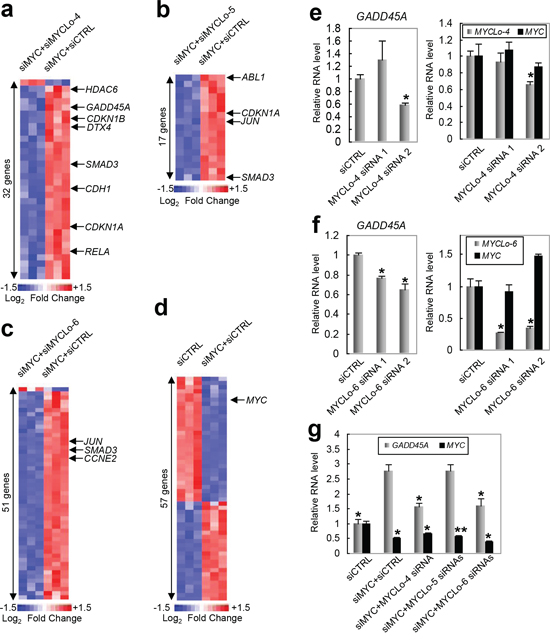 More than one third of MYC target genes are repressed by MYC although the transcription factor MYC is a universal amplifier of global gene expression [2, 3]. Many studies have shown the mechanisms of MYC-mediated repression of target genes through the interaction with initiator element, C/EBP, AP2 or Miz-1 [24–28]. And findings of MYC-regulated microRNAs enabled to elucidate an additional mechanism of MYC-mediated target gene repression through small noncoding RNAs [29–31]. A recent study also implicated long noncoding RNAs (lncRNAs) in the mechanism of repression of MYC target genes, showing that MYC-induced lncRNAs suppress MYC-repressed target genes [13]. Here, we show that MYC-repressed lncRNAs also regulate MYC-repressed target genes by enhancing their expression (Figure 6). This finding provides an extension of our understanding of MYC-regulated lncRNAs in MYC function. 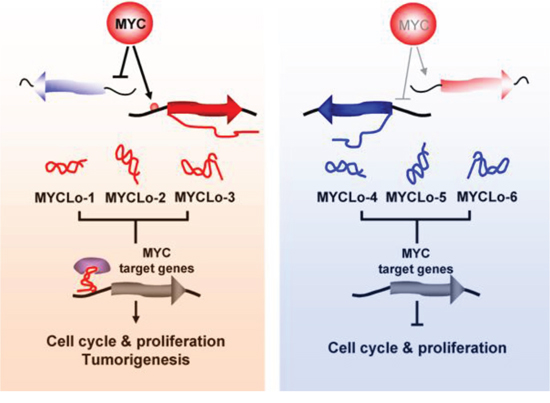 Some transcription factors such as MYC and p53 have a critical role in cancer development by regulating transcription of numerous genes. For the last decade, it has been revealed that those transcription factors are responsible for the regulation of not only protein coding genes but also noncoding RNAs, and the importance of the noncoding RNAs has been elucidated [29, 31, 35–37]. MYC-regulated lncRNAs were recently highlighted, compared to other noncoding RNAs regulated by cancer-associated transcription factors [13, 20, 21]. In this study, we identify MYC-repressed lncRNAs and characterize their function in the MYC pathway. Together with the previous findings of MYC-regulated lncRNAs, our results show that MYC tunes its oncogenic function by inducing oncogenic lncRNAs and repressing tumor-suppressor lncRNAs (Figure 6).

5′ and 3′ RACE were performed using the SMARTer RACE cDNA Amplification Kit (Clontech). All procedures were done in accordance with manufacturer’s instruction. Total RNA from HT29 or SW620 was used. PCR of the internal region was performed when starting points of 5′ and 3′ RACE had an unamplified gap. All primers used for RACE are presented in Table S5.

All cell lines were cultured as recommended by the ATCC. All custom siRNAs were designed by the Dharmacon custom siRNA design tool based on sequence information identified by RACE. For each MYCLo, 2 kinds of custom siRNAs were designed and used. All sequence information of the siRNAs is shown in Table S6. Cells were transfected with Lipofectamine RNAiMAx (Invitrogen) for oligonucleotides and Lipofectamine LTX for plasmids in accordance with manufacturer’s instructions. In all transfection experiments, 50 nM siRNA was used.

For cell proliferation assay, the MTS assay from Promega (CellTiter 96 AQueous One Solution Cell Proliferation Assay) was used following manufacturer’s instruction. Briefly, cells in 96-wells plate were incubated for 72 hr in a humidified 5% CO2 atmosphere after transfection with indicated siRNAs, followed by addition of 20μl CellTiter 96 AQueous One Solution and 1–4 hr incubation in humidified 5% CO2 atmosphere. The absorbance at 490 nm was recorded.

All graph values represent means ± S.D. from three independent experiments with each measured in triplicate. The differences between two groups were analyzed with unpaired two-tailed Student’s t-test. p-value < 0.05 was considered statistically significant and indicated with asterisks as described in figure legends.

This work was supported by grants from the National Cancer Institute (EDRN U01 CA152758).