Abiraterone acetate (ABI) is associated not only with a significant survival advantage in both chemotherapy-naive and -treated patients with metastatic castration-resistant prostate cancer (mCRPC), but also with a delay in time to development of Skeletal Related Events and in radiological skeletal progression. These bone benefits may be related to a direct effect on prostate cancer cells in bone or to a specific mechanism directed to bone microenvironment. To test this hypothesis we designed an in vitro study aimed to evaluate a potential direct effect of ABI on human primary osteoclasts/osteoblasts (OCLs/OBLs). We also assessed changes in bone turnover markers, serum carboxy-terminal collagen crosslinks (CTX) and alkaline phosphatase (ALP), in 49 mCRPC patients treated with ABI.

These findings suggest a novel biological mechanism of action of ABI consisting in a direct bone anabolic and anti-resorptive activity.

Abiraterone acetate (ABI) is a selective androgen biosynthesis inhibitor that potently and irreversibly blocks Cyp17 resulting in virtually undetectable serum and intratumoral androgen production in the adrenals, testes and prostate cancer cells [2, 3]. In phase III studies in metastatic castration-resistant prostate cancer (mCRPC) patients, it was demonstrated that ABI treatment is associated not only with a significant survival advantage in both chemotherapy-naive and chemotherapy-treated patients [4-6] but also, in docetaxel treated patients, with a better pain control from skeletal metastases, a delay in time to development SREs and in radiological skeletal progression. More specifically, 25% of patients developed a skeletal event in 9.9 months when treated with ABI and 4.9 months with placebo and time to first SRE was 25.0 months with ABI compared to 20.3 months with placebo [4, 5]. These ABI effects on metastatic bone disease may be secondary to a systemic control of the disease due to a direct antitumor effect that, in turns, leads to a decrease of cancer cells/OCLs/OBLs vicious circle or, alternatively, to a specific action directed to bone microenvironment. To test this second hypothesis we have designed a translational study aimed to investigate a potential bone direct effect of ABI in an in vitro model of human primary OCLs/OBLs and in a prospective cohort of castration resistant prostate cancer patients in which bone turnover markers were assessed during ABI treatment.

Cyp17a1 and androgen receptor expression during osteoclast and osteoblast differentiation 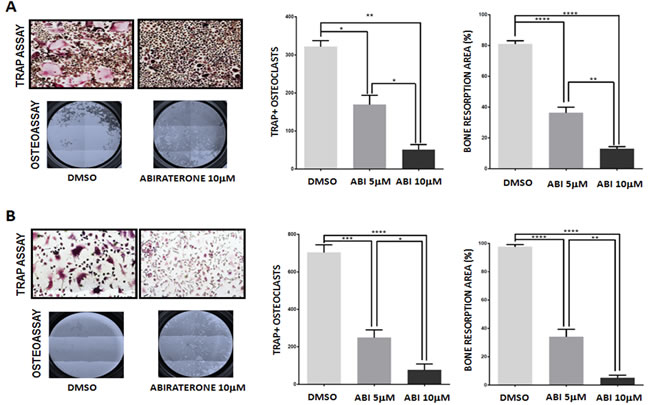 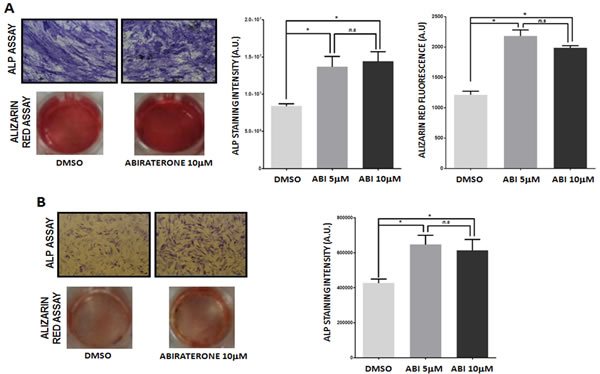 Figure 2: Effect of abiraterone treatment on primary osteoblast. ALP and Alizarin Red assay in treated and untreated osteoclasts (DMSO) in presence (A) and absence (B) of steroids. *(P < 0.05).

Effect of ABI on osteoclast/osteoblast markers

Compared to baseline values, ABI significantly down-modulated osteoclast markers such as TRAP (p < 0.001), cathepsin-K (P < 0.001), MMP-9 (P = 0.015) and up-regulated the expression of osteoblast’ ALP (p = 0.015) and osteocalcin (p = 0.034) genes both in presence and absence of steroids (Fig. 3A and 3B). The reduction of cathepsin-K levels and the increase of osteocalcin expression were confirmed by Western Blot analyses (Fig. 3A and 3B). 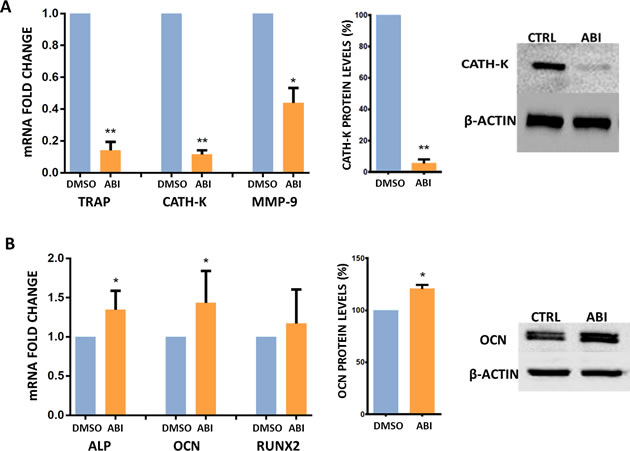 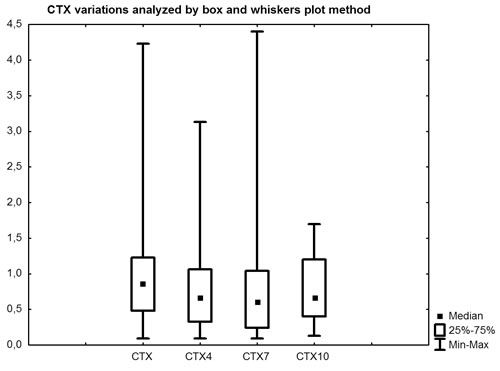 Figure 4: Comparison between CTX at baseline and after three, six and nine months. 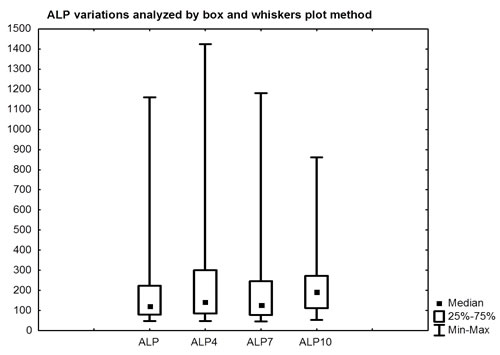 Figure 5: Comparison between ALP at baseline and after three, six and nine months.

The results of the present study demonstrate for the first time a direct bone anabolic and an anti-resorptive effect of ABI both in vitro and in castration resistant prostate cancer patients. Indeed, ABI is able to specifically modulate osteoclast/osteoblast differentiation without generating any cytotoxic and/or proliferative effect at the administrated doses. Moreover, our findings show that ABI regulates gene expression in bone cells modulating mRNA levels of key osteoclastic/osteoblastic genes. Intriguingly, we observed that anabolic and anti-resorptive effects are produced both in presence and absence of steroids suggesting a non-canonical mechanism of action that seems to be, at least in part, androgen-independent.

Recently Bruno et al. reported about an alternative mechanism analyzing the effect of ABI and other specifc CyP17 inhibitors in an androgen-independent prostate cancer cell line (PC-3) [16]. The treatment induced a rapid release of calcium from the endoplasmic reticulum (ER) resulting in disruption of calcium homeostasis. This, in turns, led to the ER stress response (ERSR), also known as “unfolded protein response” (UPR) through the phosphorylation of the translation elongation factor eIF2α and the up-regulation of stress response genes, triggering cell cycle arrest. Moreover, recent evidences showed that eIF2α phosphorylation promotes the activation of ATF4, a key osteoblastic transcriptional factor, leading to osteocalcin up-regulation and down-modulation of a key pro-osteoclastic factor, NFATc1, resulting in bone matrix production [17]. Taken together these data suggest a novel potential molecular mechanism of ABI that, acting through eIF2α phosphorylation, may promote osteoblastogenesis and inhibit osteoclast-dependent bone resorption. These promising in vitro results provided a strong rationale to design a translational study to investigate the potential modulation of serum bone turnover markers by ABI treatment in a cohort of 49 metastatic castration resistant prostate cancer patients (mCRPC). Our findings showed that in these patients ABI significantly inhibited bone resorption as documented by a decrease of serum CTX values and enhanced new bone formation as shown by an increase of ALP in agreement with in vitro data.

Overall, our pre-clinical and clinical data provide a biological rationale for the high efficacy of ABI treatment in improving multiple skeletal disease specific clinical endpoints as recently documented in the context of phase III clinical trials. Molecules that simultaneous target prostate cancer cells and bone microenvironment could significantly influence future therapeutic approaches in order to achieve a better disease control and management of prostate cancer bone metastases. If further prospective confirmation will be obtained these pivotal results justify a potential synergistic effect of ABI with bone-targeted therapies (bisphosphonates and denosumab).

In conclusion, these findings represent the first evidence of a novel mechanism of ABI directed on bone microenvironment together with the known antitumoral effect on CRPC cells and pave the way to new treatment scenarios for bone metastatic prostate cancer.

All culture media, growth factors, cytokine and ABI acetate were replaced every 3-4 days [18-19].

At the end of the differentiation protocol (day 12) culture medium was removed and cells were fixed with 4% formaldehyde for 5 minute and stained with leukocyte acid phosphatase (TRAP) kit (Sigma-Aldrich) according to manufacturer’s instructions. Stained positive cells (>3 nuclei) were then counted [20].

Osteoclasts activity was assessed culturing cells on plates coated with a synthetic inorganic bone mimetic matrix (Osteoassay, Corning). At day 12 the culture medium was removed and plates were filled with sodium hypochlorite solution to evaluate the ability of mature osteoclasts to reabsorb this substrate; pits produced by osteoclasts re-absorptive activity were quantified by ImageJ software.

On day 21 cells were fixed with 4% formaldehyde for 5 minute and stained with alkaline phosphatase (ALP) kit (Sigma-Aldrich) according to the manufacturer’s protocol. ALP positivity was quantified by ImageJ software.

In order to detect bone matrix deposition as a marker of osteoblastic activity cells were fixed with 4% formaldehyde for 20 minute and stained with alizarin red for 1 hour at room temperature. Alizarin red fluorescence was detected at 470 nm and quantified by spectrofluorimeter (Tecan Infinite M200Pro) [19].

Cell viability was evaluated by cell growth determination kit, MTT-based assay (Sigma-Aldrich), and performed according to manufacturer’s instructions; the optical density (OD) of the colored complex formed was read by spectrophotometer with 570 nm wavelength and background absorbance at 690 nm wavelength was subtracted.

Patients with metastatic castration resistant prostate cancer (mCRPC) with or without bone metastases in clinical progression following treatment with docetaxel and enrolled in the ABI acetate expanded access program at the Division of Medical Oncology-S. Luigi Hospital, Orbassano were prospectively assessed. ABI acetate was administered at the dose of 1.000 mg daily with prednisone 5 mg twice a day in combination with luteinizing hormone releasing hormone analogue until radiological or serological progression. A subgroup of patients was also treated with zoledronic acid at standard unchanged doses in the last three months before starting ABI. All patients were evaluated for bone formation and resorption.

For marker analyses Wilcoxon’s matched pairs sign-rank test was used to compare pair data at baseline and after 3, 6 and 9 months of treatment. All p-values reported were two-sided; p-values <0.05 were chosen for statistical significance. Statistical computation was performed using the SPSS for Windows software package.

We thank Dr. Francesca Agostini of Cell Culture Laboratory, Department of Biomedicine and Prevention of the University Tor Vergata that kindly provided hMSC used in our experiments.

This research received no specific third-party funds or grant.

The authors of this manuscript have no conflicts of interest to disclose.