Development of effective systemic treatments of primary breast cancers has resulted in higher incidence as well as mortality associated with metastatic disease. One of the biggest clinical challenges for the effective management of brain metastatic breast cancers is the lack of validated molecular targets [4]. In recent years, microRNAs (miRNAs) have emerged as promising prognostic and therapeutic targets for metastatic breast cancers [5-8]. miRNAs have also been implicated in the brain metastases of breast cancers and the ones investigated in this context include miR-7 [9], miR-1258 [10] and miR-146a [11]. Recently, we reported [12] elevated miR-10b levels in primary breast cancer specimens of patients who subsequently developed brain metastasis, compared to those who did not. miR-20b is another microRNA that has been shown to be involved in breast tumorigenesis [13, 14] and, therefore, this study was undertaken to determine the role, if any, of miR-20b in breast cancer brain metastasis.

There is evidence to suggest that miR-20b is involved in regulation of estrogen receptor (ER) [17], so, we chose ER-positive MCF-7 cells as our model to investigate in vitro effects of miR-20b modulation. Additionally, triple-negative breast cancers (TNBC) are linked to brain metastases and, therefore, we chose a TNBC cell line, MDA-MB-231, as our other model. We transfected cells with pre-miR-20b oligonucleotides and observed the effects on anchorage-dependent colony formation as well as invasion. Pre-miR-20b transfections results in increased expression of miR-20b, suggesting efficient transfections (Figure 2A). We tested colony formation by these cells under anchorage-independent conditions in soft agar and observed 59.9% more colonies in pre-miR-20b-transfected MCF-7 cells (p=0.0233) and 34.4% more colonies in pre-miR-20b-transfected MDA-MB-231 cells (p=0.0040) (Figure 2B). When tested for invasion, miR-20b transfected cells were significantly more invasive. Relative to control cells, we observed 70.3% increase in invasiveness of MCF-7 cells (p=0.0003) and 38.5% increase in invasiveness of MDA-MB-231 cells (p=0.0186) that were transfected with pre-miR-20b (Figure 2B).

miR-20b in patients with brain metastases 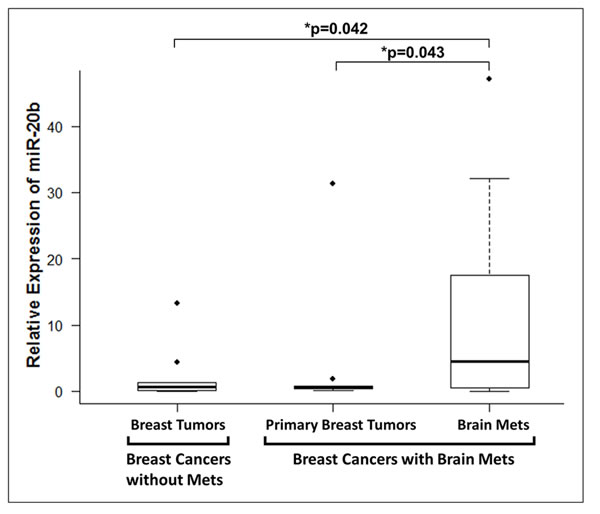 miR-20b in brain vs. bone-seeking cells 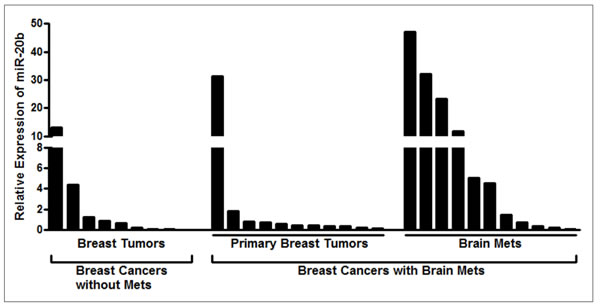 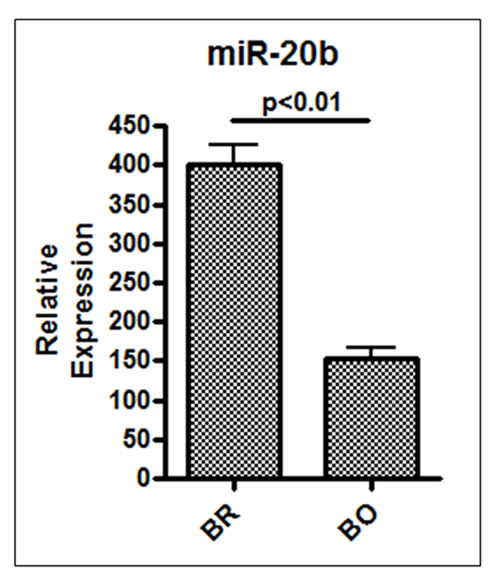 A number of reports have evaluated the role of miR-20b in human cancers [25, 26] and like many other miRNAs, the results are conflicting. Some studies found a down-regulated miR-20b supporting its tumor suppressive function [27-29] while others reported elevated levels supporting an oncogenic role [13, 14, 30-33]. Our results are indicative of an oncogenic role because we found elevated levels of miR-20b in brain metastases. In an earlier report [9], it was noted that the down-regulation of miR-7 along with up-regulation of its target KLF4, was inversely associated with brain metastasis-free survival but was not associated with bone metastasis. These results suggested that modulated miRNA expressions might determine the specific metastasis of breast cancer cells to brain. We observed an elevated miR-20b in brain-seeking cells compared to bone-seeking cells. It thus appears that even miR-20b might play a role in brain-specific metastasis of breast cancer cells, an idea that needs further investigation. Metastatic breast cancer is lethal, irrespective of the final organ of metastasis, but the published results with miR-7 and our current results point to the possibility of a miRNA signature that can help predict the elevated risk of brain metastases.

A number of studies have identified PTEN to be a target of miR-20b [13, 32, 33]. Such validation includes studies conducted in breast cancer models [13, 14]. PTEN is a tumor suppressor that is down-regulated in human cancers. A survey of literature reveals a role of PTEN in brain metastasis of human cancers of different origins. In a study [15] that used array-comparative genomic hybridization and microsatellite analysis to compare patterns of chromosomal aberrations in primary tumors vs. brain metastases from breast cancer patients, PTEN was significantly down-regulated in brain metastases compared with non-metastatic primary tumors. A similar role of PTEN was later observed in brain metastases of non-small cell lung cancers [34]. Loss of PTEN was also reported to correlate significantly with shortened time to brain metastases in melanoma patients [35]. It thus appears that PTEN loss is relevant to brain metastases from cancers of different primary origins, and a regulatory role of miR-20b, as suggested by our present results, will be interesting to evaluate in future studies.

In conclusion, a significant number of advanced breast cancers metastasize to brain, with molecular biomarkers being a subject of ongoing investigations. Our results suggest that miR-20b can be a candidate biomarker for the identification of patients at high risk of brain metastatic disease. Combined with our earlier published results [12] and those from other groups [9-11], it is possible that brain metastatic breast cancer cells have a distinct signature. In this burgeoning era of personalized medicine, finding such molecular signature would represent a significant step forward towards the ultimate goal of optimizing targeted therapies as well as designing novel approaches to prevent, delay and eliminate brain metastatic disease.

A retrospective search was done through the computerized database at the Department of Pathology, Karmanos Cancer Institute, Wayne State University, for breast cancer cases with brain metastasis, as described previously [12]. The period of analysis was cases diagnosed between January 1994 and December 2011. The study was approved by the Institutional Review Board.

The histopathological glass slides were microscopically reviewed to select the tumor block with preserved, viable tumor tissue comprising over 50% of tumors in the paraffin block, and tumor area was marked. Slides with large areas of necrosis were excluded from the study. Ten sections of 10 µM thickness were cut from each selected block marked for tumor areas and avoiding normal tissues [12].

Human breast cancer cell lines MCF-7 and MDA-MB-231 were cultured in DMEM media with 10% fetal bovine serum and 1% penicillin/streptomycin. Brain and bone-specific derivatives of MDA-MB-231 cells were obtained from Dr. Yoneda’s lab [18]. All cells were cultured in 5% CO2–humidified atmosphere at 37°C. The cell lines have been tested and authenticated in core facility (Applied Genomics Technology Center at Wayne State University) by short tandem repeat profiling using the PowerPlex 16 System from Promega.

RNA was extracted from the FFPE tumor samples using the Qiagen kits, as per the manufacturers’ protocol. Expression of miR-20b was assessed using quantitative RT-PCR, as described previously [12]. For the cultured cells, total RNA was isolated using mirVana miRNA isolation kit (Ambion). The miRNA levels were determined using miRNA-specific Taqman MGB probes from the Taqman MicroRNA Assay (Applied Biosystems). The relative amounts of miRNA were normalized to the endogenous control gene RNU48.

Cells were seeded at 2.5 x 105 cells per well in six-well plates and transfected with pre-miR-20b or pre-miRNA-negative controls (Ambion) at a final concentration of 200 nM using DharmaFECT1 transfection reagent (Dharmacon). After 2 days of transfection, cells were passaged and transfected twice again before using these cells for invasion assays.

3 x 104 cells were plated in 0.5 ml of culture medium containing 0.3% (w/v) top agar layered over a basal layer of 0.7% (w/v) agar (with culture medium and the supplements) in 24-well plates. After appropriate culture time (3 weeks for MDA-MB-231 and 4 weeks for MCF-7 cells), colonies (>50 cells) were counted. Experiments were carried out in triplicate, and results presented are representative of two independent observations.

The data are presented as the mean values ± SD. A p value < 0.05 was considered to be statistically significant. To compare the miR-20b in tissues from breast cancers with or without brain metastasis, one sided two sample t test on log-transformed data was used. To compare miR-20b in tissues from paired primary breast tissues and brain metastases, one sided one sample paired t test on log-transformed data was used. All p values were raw and not adjusted for multiple testing. The statistical analyses for human tissue samples were performed with software R. Two sided two sample t test was used for the rest of analyses (using PRISM).

None of the authors report any conflict of interest or financial disclosure.