Although microRNA-200a (miR-200a) is frequently downregulated in cancer, its role in side population (SP) has not been investigated. In this study, 101 pairs of primary hepatocellular carcinoma (HCC) tissues and matched normal control tissues were analyzed for miR-200a expression and its clinicopathological value was determined. We found that miR-200a was downregulated in HCC/SP and this was associated metastasis. MiR-200a suppressed metastasis of SP cells. Overexpression of miR-200a in SP cells decreased metastasis-related markers and expression of ZEB2. The associations between miR-200a, SP cells and ZEB2 were validated in HCC. These findings reveal that miR-200a suppresses metastasis of SP cells by downregulating ZEB2.

Metastasis is a major cause of death in patients with hepatocellular carcinoma (HCC), although survival has improved due to advances in surgical techniques [1].

Cancer stem cells (CSCs) are characterized by their capacity for indefinite self-renew and by their relative quiescence [2, 3]. In several types of cancer, side populations (SPs) have been shown to be enriched for cells with CSC-like activity and a CSC phenotype [4]. Recent studies have suggested that SP cells in human pancreatic cancer are characteristically chemoresistant [5]. Furthermore, a recent study reported that SP cells possess the ability to self-renew, and to divide asymmetrically into SP and non-SP cells [6]. Other reports have indicated that SP cells may serve as an ideal model for stem cell for research [7].

MicroRNAs (miRNAs) are frequently dysregulated in cancer where they may behave as tumor suppressor genes [8, 9] or oncogenes [10]. Recently, it was reported that miR-200a plays a crucial role in the development of cancer through its regulation of epithelial to mesenchymal transition (EMT), cell migration, proliferation and metastasis [11, 12, 13]. In breast and ovarian cancer, the down-regulation of miR-200a plays an important role in cancer metastasis [14, 15, 16]. EMT is a process by which epithelial cells lose their cell-cell adhesion and gain invasive properties, which leads to the acquisition of mesenchymal stem cell characteristics [17, 18]. Previously, it was shown that mesenchymal to epithelial transition (MET) is promoted by repression of the zinc finger E-box-binding 1 (ZEB1) and ZEB2 expression [19, 20]. In our previous study, global miRNA expression profiles of SP cells in F344 rat HCC cells and fetal liver cells were screened through a microarray platform. We found that miR-200a was significantly downregulated in the SP cells of HCC compared with the fetal liver cells [21].

In this study, we show that low expression of miR-200a promotes human HCC SP cells to metastasize through the transactivation of ZEB2 expression, which results in the induction of EMT.

Table 1: Association of miR-200a expression with the clinicopathologic factors of 101 patients with HCC

In our previous studies, we found that miR-200a inhibits the EMT process via the activation of transcriptional factors such as ZEB2, which is required during EMT; this has been thoroughly demonstrated in rat hepatic oval cells [22]. We further investigated the possible relationship between miR-200a, ZEB2 and E-cadherin expression in human HCC tissues. Immunohistochemistry revealed that miR-200a expression was inversely correlated with ZEB2 expression but was positively correlated with E-cadherin expression (Fig. 2A, B). 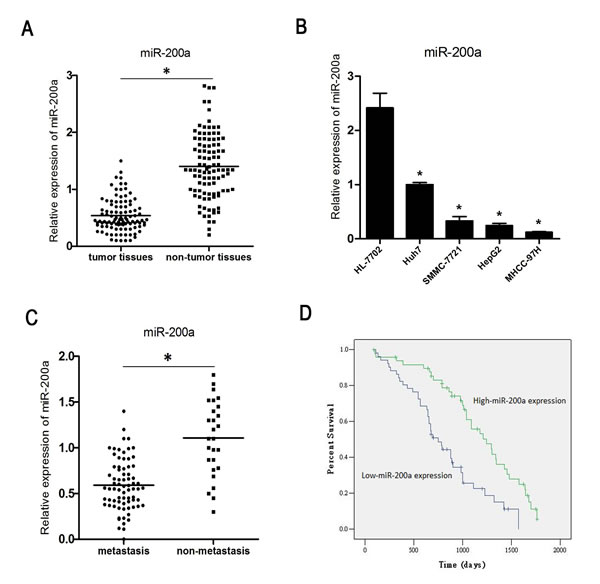 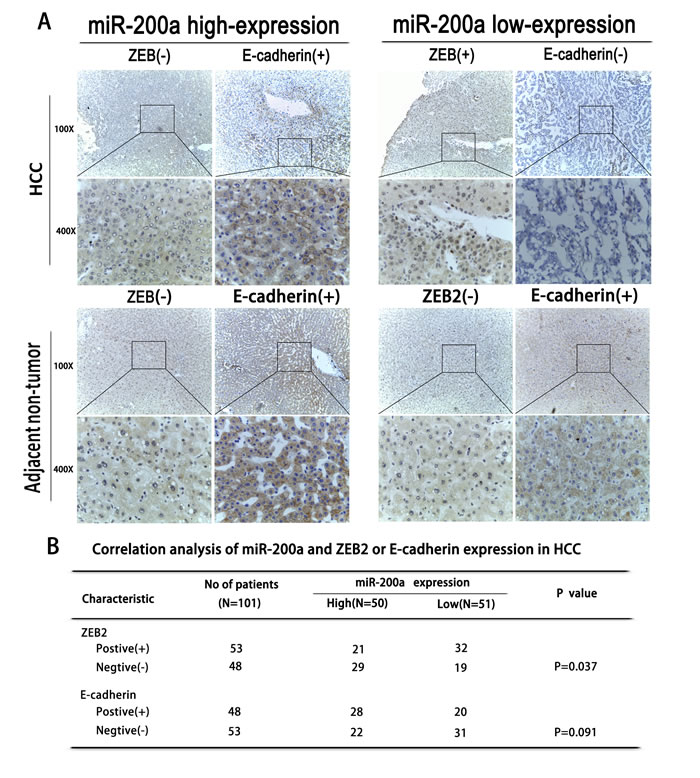 Identification of side population

The subpopulation is shown in a representative sample (red color-nuclear staining with Hoechst33342 dye; SP-side population; NSP-non-side population). (Fig. 3A). HCC cells were analyzed by dual wavelength FACS after incubation with Hoechst 33342. Representative results that were analyzed by flow cytometry are shown (0.1% in HepG2, 2.8% in MHCC-97H, 0.9% in SMMC-7721, 1.3% in Huh7) (Fig. 3B). To understand the influence of differentiation in this subpopulation, SP cells were detected as a subpopulation of SP and NSP cells after 4 days in culture (37% and 1.7% in MHCC-97H, 41% and 0.9% in Huh7, respectively) (Fig. 3C). 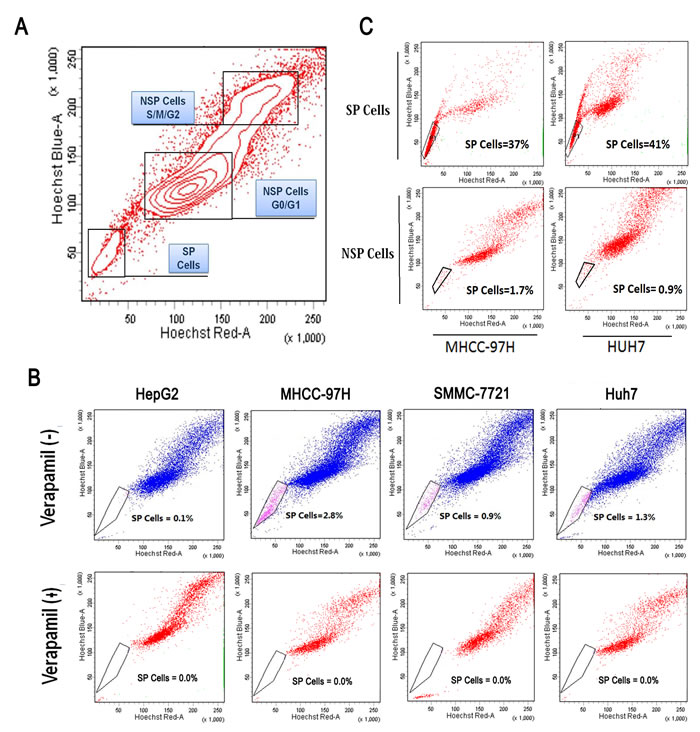 Figure 3: Identification of side population in HCC cell lines. (A) A subpopulation was shown in a representative sample (red color-nuclear staining with Hoechst33342 dye; SP-side population; NSP-non side population). (B) SP cells of MHCC-97H, Huh7, SMMC-7721 and HepG2 were analyzed by dual wavelength FACS after incubation with Hoechst 33342. (C) A differentiation analysis of SP cells in a subpopulation of SP and NSP cells after four days in culture.

Characteristics of the subpopulation

ALBU, a marker of mature hepatocytes, was lower in SP cells and higher in non-SP cells. Conversely, KRT14, a marker of liver stem cells, was highly expressed in SP cells but was weakly expressed in NSP cells (Fig. 4A). The number of spheres formed by SP cells from the Huh7 and MHCC-97H cell lines was significantly higher than the corresponding number of NSP cells. In addition, the SP cells were able to induce larger spheres than the non-SP cells (Fig. 4B).

The invasion and migration abilities of MHCC-97H and Huh7 cells were higher in SP cells than in NSP cells (Fig. 4C). The morphologic appearance of SP and NSP cells was determined after staining for F-actin filaments and after the nuclei were stained with Rhodamine Phalloidin and DAPI. Under fluorescence microscopy after different times in culture (either 8 h or 72 h after the subpopulation cells were sorted), the SP cells of the Huh7 cell line appeared confluent with little cytoplasm and large nucleolus, while the NSP cells demonstrated expanded cytoplasm and a considerably small pyknotic nucleolus (Fig. 4D). 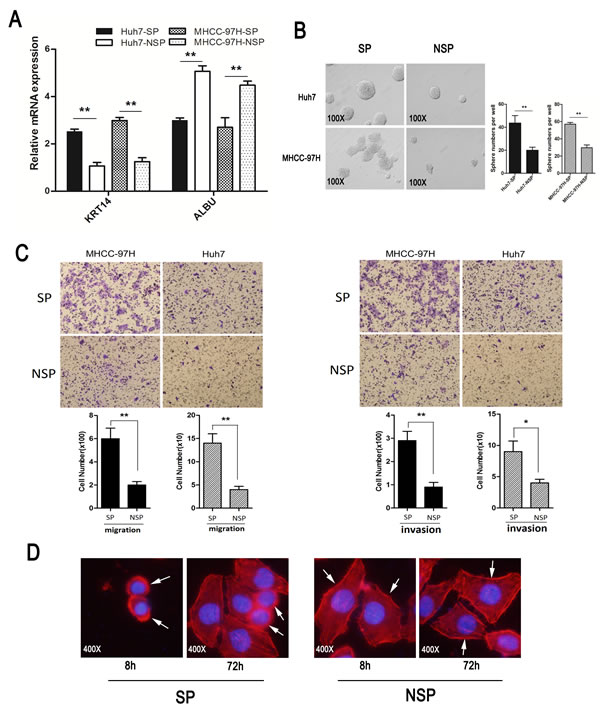 Figure 4: Characteristic of SP and NSP cells. (A) The expression of ALBU (a marker of mature hepatocytes) and KRT14 (a marker of liver stem cells) in side population cells and in non-side population cells that were isolated from HCC cell lines. (B) Sphere formation assay: SP and non-SP cells were cultured in serum-free media for two weeks (magnification×100). (C) Cell invasion and migration assays: (Left panel, representative images of migration assay and quantification of cell number; Right panel, representative images of invasion assay and quantification of cell number). (D) Images of cells stained with Rhodamine Phalloidin and DAPI reflect the different morphologies (magnification×400). *p<0.05, **p<0.01, t test.

MiR-200a inhibits the metastasis of SP cells in vitro

The index of miR-200a expression in SP cells of MHCC-97H and Huh7 was significantly lower than that in NSP cells from both the MHCC-97H and Huh7 cell lines (Fig. 5A). Expression of miR-200a after transfection was confirmed by qRT-PCR (Fig. 5B). Expression of metastasis-related markers was confirmed by qRT-PCR after transfection (Fig. 5C). E-cadherin and ZO-1 were over-expressed in the MHCC-97H-SP-miR-200a group but were weakly-expressed in the Huh7-SP-KD-miR-200a group. In contrast, the expression values of N-cadherin, VASP, LAMC2 and ZEB2 were opposite to those observed for the other above-mentioned genes. The upregulation of miR-200a expression decreased the ability of the MHCC-97H-SP cells to invade and migrate. Conversely, the inhibition of miR-200a expression in Huh7-SP cells enhanced the ability of the SP cells to invade and migrate (Fig. 5D). 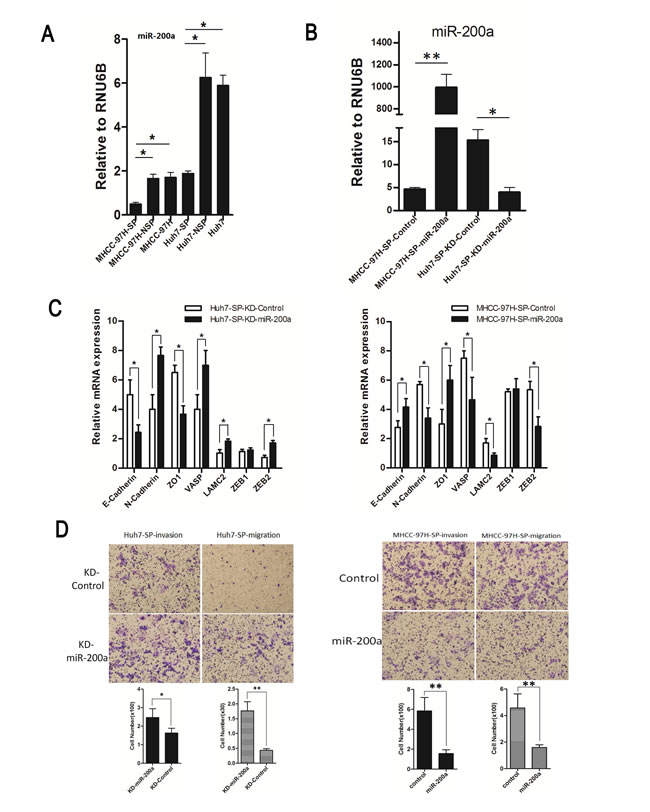 MiR-200a inhibits the metastasis of SP cells in vivo 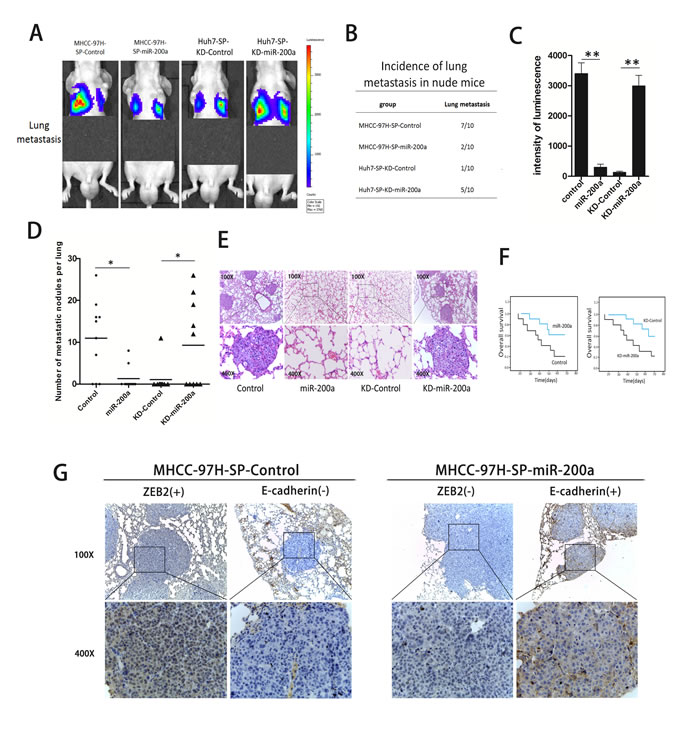 The target site of miR-200a in the 3’UTR of ZEB2 was predicted (Fig. 7A). We also over-expressed or downregulated the miR-200a expression in MHCC-97H, and by western-blot we determined that miR-200a had the opposite function of ZEB2 (Fig. 7B). A luciferase reporter gene assay showed that, compared with the NC group, miR-200a mimics significantly inhibited the 3’UTR wild-type (WT) ZEB2 activity (P<0.01) and a miR-200a inhibitor significantly increased its activity (P<0.01). MiR-200a mimics and a miR-200a inhibitor had no effect on the activity of 3’UTR mutant (MT) ZEB2 (Fig. 7C) (Y-axis signifies the luciferase activity of ZEB2). 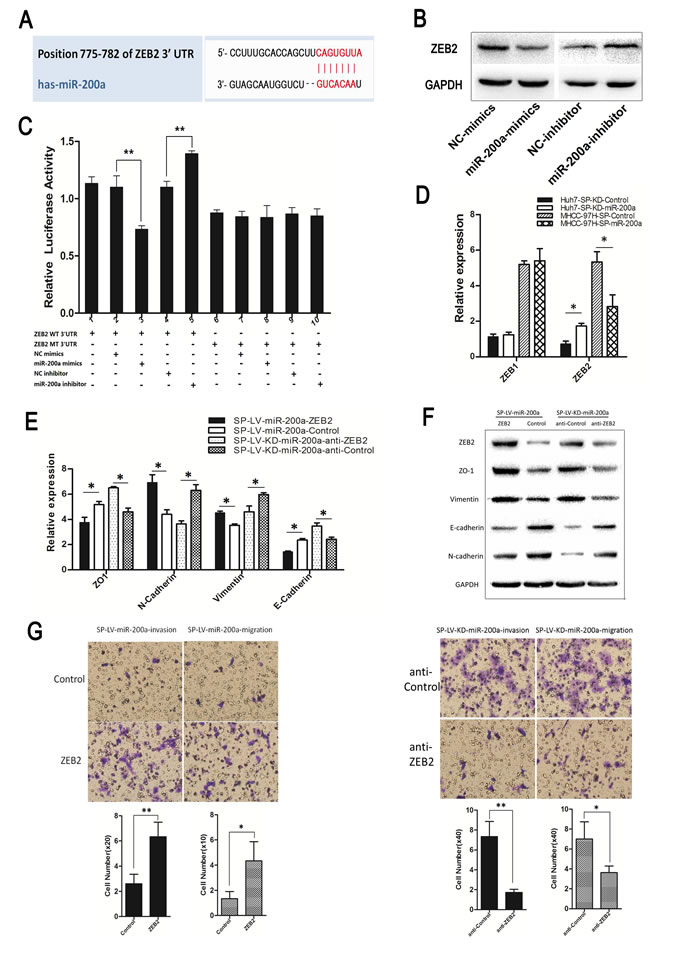 Figure 7: MiR-200a induces the metastasis of SP cells through the transactivation of ZEB2 expression. (A) The miR-200a target site in the 3’UTR of ZEB2. (B) The up-regulation or down-regulation of miR-200a in MHCC-97H demonstrated an effect on ZEB2 according to western-blot. (C) Luciferase activity of ZEB2 after transfection with miR-200a mimics or an inhibitor. (D) Functional evaluation of miR-200a induction on its validated target, ZEB, in different groups by qRT-PCR. (E) Real-time PCR and (F) western-blot were used to detect the expression of EMT markers. (G) Following the infection of the MHCC-97H-SP-miR-200a cells and Huh7-SP-KD-miR-200a cells with ZEB2 siRNA and the designated SP-ZEB2 and SP-anti-ZEB2. The cell invasion and migration capacities were assessed with a transwell assay. *p<0.05, **p<0.01, t test.

Recently, SP cells were isolated from the HeLa cell line and shared morphological characteristics with stem-like cells, including a rounder shape, smaller size and higher adherence, unlike the NSP cells [27]. In our research, ALBU was lower in SP cells but higher in NSP cells. Conversely, the expression of KRT14 was high in SP cells but was low in NSP cells. Additionally, SP cells had higher capacity for sphere formation and a greater capacity for invasion and migration than NSP cells. These results suggest that SP cells possess certain stem cell characteristics. In the last study, researchers primarily focused on functional studies of SP cells instead of on molecular mechanistic studies. In this study, we found that the down-regulation of miR-200a may promote the metastasis of SP cells, whereas the up-regulation of miR-200a inhibited the metastasis of SP cells.

In conclusion, this study delineates the function of miR-200a in SP cells of HCC. Thus, further studies of SP cells from HCC and the components of this pathway may provide new insights into the treatment of this deadly disease.

The cells were labeled with Hoechst 33342 (Sigma, USA) at a concentration of 5 ug/ml for SMMC-7721, Huh7 and 8 ug/ml for MHCC-97H. The cells were incubated for 90 minutes at 37°C in the absence or presence of 60 ug/ml verapamil (Sigma, USA). After staining, the cells were suspended in cold DMEM that contained 2 ug/ml propidium iodide (PI, Sigma, USA), 2% FBS and 10 mM HEPES, then passed through a 40 um mesh filter (BD,USA) and maintained at 4°C until flow cytometry analysis.

Male athymic nude mice (4-6 weeks old) were used. SP cells (1×104) were stably transfected with the luciferase gene, suspended in DMEM and injected into the caudal vein of nude mice. The location of tumors in the nude mice was detected by a bioluminescent imaging (BLI) system as previously described [35].

The human miR-200a gene was constructed in GV254 (Genechem, China) and designated as either LV-miR-200a or LV-knockdown-miR-200a (LV-KD-miR-200a). An empty vector was used as the negative control and was designated LV-control or LV-KD-control. ZEB2 siRNA and negative controls (NC) were obtained from Genechem Co. (China) and were designated SP-ZEB2 or SP-anti-ZEB2.

Data were analyzed with SPSS 17.0 software. To evaluate significant differences between two matched paired groups or between two independent groups of samples, paired t tests and the Mann-Whitney U test were used, respectively. Survival curves were plotted according to the Kaplan-Meier method and were compared by the log-rank test. Data are expressed as the mean ± SD and P< 0.05 was considered statistically significant.