When the culture fluid of Colorectal cancer cell lines(DLD-1, HCT116, and LoVo) with high levels of VEGF/PROK1 expression was injected subcutaneously into mice, the culture fluid increased subcutaneous angiogenesis. But when both anti-PROK1 and anti-VEGF antibodies were present in the culture fluid, the length and size of the blood vessels were reduced compared with those seen in the fluid-only, anti-PROK1, and anti-VEGF controls. Also, tumor masses were produced in mice by subcutaneously embedding colorectal cancer cells with high levels VEGF/PROK1 expression. When both anti-PROK1 and anti-VEGF antibodies were simultaneously applied, tumor formation and peritumoral angiogenesis were strongly suppressed, compared with when either anti-PROK1 antibody or anti-VEGF antibody was applied alone.

The possible mechanism of hematogenous metastasis of colorectal cancer is as follows: dissociation from the primary lesion, disintegration of the basement membrane, movement into the interstitium, invasion into the vascular channel, and colonization of target organs during the final stage [7, 8]. In recent years, molecular biological investigations have been undertaken to study the metastasis of various tumors, and the involvement of a number of factors has been confirmed [9-12]. Various molecular target drugs have been used and listed in NCCN’s Guidelines for the Treatment of Colorectal Cancer [13]. In particular, there are drugs that target molecules related to the angiogenic growth factor:vascular endothelial growth factor (VEGF) (anti-VEGF antibody and anti-VEGF receptor antibody), a drug that targets the intracellular signaling mechanism-related EGF receptor (anti-EGFR antibody), and a multikinase inhibitor that targets receptor tyrosine kinases [14-18].

VEGF is known to act on the pericellular interstitium to obtain oxygen and energy [19-21]. A report showed that intensifying VEGF expression activated proliferation of liver metastatic lesions in mice [22]. Furthermore, as suppression of VEGF activity inhibits the proliferation of cancer cells, the prognosis for patients with unresectable colorectal cancer can be improved [23]. Close relationships between VEGF and hematogenous metastasis were reported for other malignant tumors such as lung, breast and renal cancer [24-27]. Meanwhile, our study involving a colorectal cancer cell line with low levels of Prokineticin1(PROK1) expression showed that angiogenesis, tumor proliferation, and hematogenous metastasis occurred at high rates in the surrounding tissues when the PROK1 gene was introduced [28-30]. Intensification of PROK1 expression was also observed in advanced-stage gastric and small intestine cancer [31]. Other institutions reported the relationship between PROK1 expression and malignancy in prostate cancer, neuroblastoma, and pancreatic cancer [32-35]. 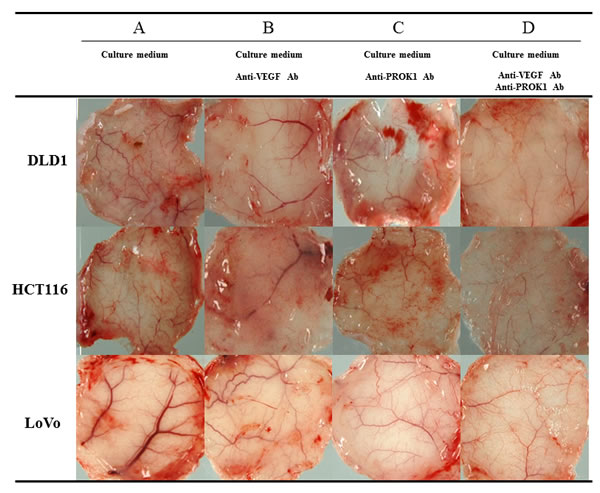 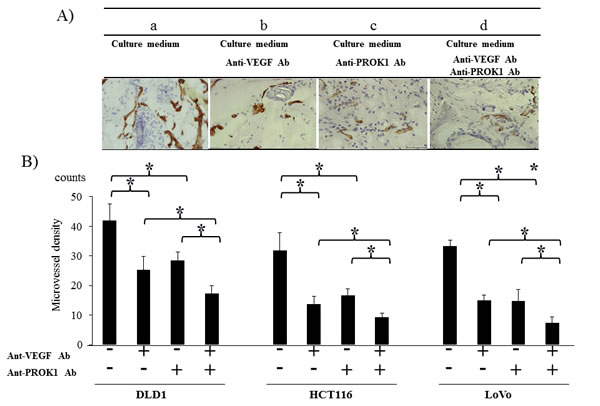 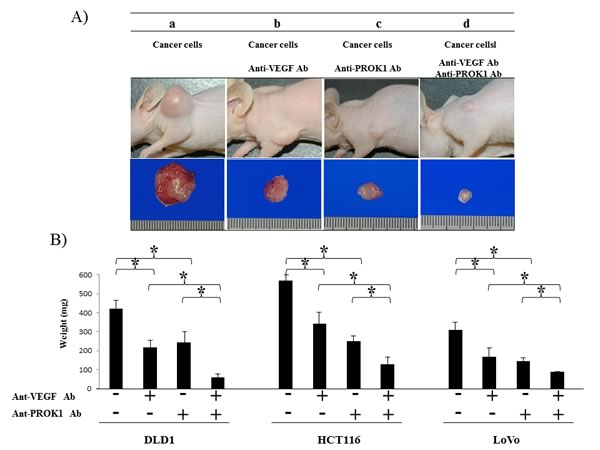 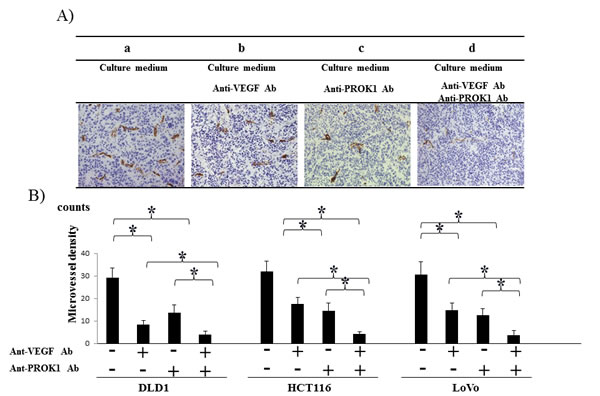 Molecular biological investigations have been undertaken for various malignant tumors, and angiogenic growth factors are known as important prognosis-determining genes for patients whose colorectal cancer has undergone hematogenous metastasis, in particular [38-41].

Among the molecule-targeting drugs for unresectable advanced recurrent colorectal cancer that are listed in the current NCCN’s Guidelines for Treatment of Colorectal Cancer [13], many of the angiogenesis-related drugs target VEGF-associated molecules. Three types are listed as efficacious drugs. Bevacizumab has a VEGF-neutralizing effect and a vascular normalization which improves the delivery and effectiveness of chemotherapeutics [14, 21, 42]. Ziv-Aflibercept is a receptor-antibody complex consisting of VEGF-binding portions from the extracellular domains of VEGF Receptors 1 and 2 and fused to human immunoglobulin IgG1Fc [18]. Regorafenib targets VEGFR1-3, TIE2 [17], and other receptor tyrosine kinases. VEGF is thought to act on the interstitium around the cancer cells and induce angiogenesis, thus leading to proliferation and metastasis of cancer cells. According to a report, VEGF and hematogenous metastasis are closely related in lung, breast, and renal cancer [24-26]. And PROK1 is thought to work as an angiogenic growth factor in colorectal cancer [27, 28, 30] and to be involved in autocrine mechanism-induced infiltration of cancer cells [43]. Also, PROK1 levels were reported to be related to the degree of malignancy in gastric cancer, small intestine cancer, pancreatic cancer, neuroblastoma, and prostatic cancer [30-34]. Recently we found that PROK1 protein was observed in the culture fluids of all colorectal cancer cell lines: DLD-1, HCT116, and LoVo [37].

Both VEGF and PROK1 have been confirmed as significant factors in colorectal cancer, though expression of the two factors has not been investigated in this context. We undertook the present study to determine whether these two factors could be possible therapeutic targets. According to our results, while angiogenesis and tumor growth were suppressed by using either factor, the suppressive effect of using both factors simultaneously was greater. (Anti-VEGF Ab in the present experiment is different from Bevacizumab). Since we have no significance using two antibodies together, further clinical studies are necessary.

In terms of mechanism of action, dimers are formed following the binding of VEGF to its receptors, VEGFR-1 and VEGFR-2, on the surface of vascular endothelial cells [44]. Autophosphorylation occurs and the MAPK cascade starts, transmitting cell growth signals into the nucleus [45]. As a result, vascular growth occurs, and cancer cells digest food and oxygen for growth. G protein-coupled receptors (PROKR1 and PROKR2) are the receptors for PROK1 and are expressed in the endothelial cells and cancer cells themselves [46, 47]. Intracellular calcium kinetics, phosphorylation of p44/p42MAP, and serine-threonine kinase Akt are involved downstream of the receptor [48], playing an important role in vascular growth, tumor growth, anti-apoptosis function, differentiation, and other cell kinetic behaviors [49].

To summarize, VEGF and PROK1 are thought to exert important functions via individual receptors to transmit different intracellular signals. Our results suggest that angiogenesis and the tumor growth rate are significantly suppressed in the presence of both anti-VEGF and anti-PROK1 antibodies together, compared with in the presence of only one or the other. Therefore, dual application of both antibodies may be developed into an effective cancer therapy.

The human colon cancer cell lines, DLD-1, HCT116 and LoVo(obtained from the European Collection of Cell Cultures in 2013, Culture Collections of Public Health England, UK) were maintained by our laboratory and cultured in RPMI1640 medium supplemented with 10% fetal bovine serum(FBS), 100 U/mL streptomycin and 100 U/mL penicillin (Gibco/Invitrogen, USA) at 37°C in 5% CO2 [36].

Each cell line was passaged at 60% confluence in a 60-mm culture dish, and cultured in RPMI1640 containing 10% FBS for 3 days. The culture fluid was collected after culture of the cell lines.

A Millipore chamber(Millipore; diameter, 10mm: filter pore size, 0.45µm) was filled with culture medium plus Ab or normal mouse IgG was implanted subcutaneous tissue into the dorsal side of six-week-old female SHO nude mice (Charles river, Japan). At 7 days after implantation, a incision was made in the skin on the dorsal side. The chamber-contacting region was photographed.

Tumors and subcutaneous tisseues were resected and embedded in OCT compound (Sakura Finetechnical, Japan). Four-µm-thick sections were analyzed for the expression of CD31 protein by the ChemMate method using the EnVision system(DAKO).For vessel counting, one field magnified 200-fold in each of five vascularized areas was counted, and average counts were recorded.

Statistical significance was performed by the student t-test using Stat Mate IV(ATMS Co., Ltd., Japan). Data are given as mean ± SEM. Differences were considered significant at P values less than .05.

Disclosure of Potential conflict of interests

All the Authors have read the manuscript and have approved this submission.