1Department of Administration and Department of Aristogenesis, No. 202 Hospital of PLA, No. 5, Shenyang, 110003, Liaoning Province, P.R. China

Breast cancer is the most prevalent malignance in women with 232670 newly estimated diagnosed cases and 40000 estimated deaths in the United States in 2014 [1]. The leading causes of these deaths are attributed to distal metastasis and resistance to currently available therapeutics [2]. Erb2/HER2 is amplified and overexpressed in 25%–30% of human breast cancers [3]. HER2-positive breast cancer has the second-poorest prognosis among breast cancer subtypes and is correlated with reduced disease-free and overall survival time [4–5]. Trastuzumab (Herceptin; Genetech, San Francisco, CA, USA) is designed to target the extra-cellular domain of human epidermal growth factor receptor 2 (HER2) and block its function, and is currently used in patients with early stage and metastatic HER2-positive breast and gastric cancers. Even though trastuzumab-based combination treatment with chemotherapy has significantly improved outcome in breast cancer patients and has paved the way for the era of targeted therapy in breast cancer treatment, the median duration of response is modest [6–7]. This is due to either primary or secondary mechanisms of resistance during the course of treatment [8–9]. More importantly, only less than 35% of patients with HER2-positive breast cancer initially respond to trastuzumab [10–11]. Though a number of critical studies have been conducted to identify the underlying mechanisms that account for trastuzumab resistance, little is known regarding the biological role of long non-coding RNA (lncRNA) in the process of trastuzumab resistance.

The multifunctional cytokine transforming growth factor β (TGF-β) orchestrates an intricate signaling network to modulate carcinogenesis and progression [12]. It has been confirmed that TGF-β signaling could promote cancer progression and confer resistance to various therapeutics through enhancing proliferation, migration, and invasion, in part by its ability to induce epithelial-mesenchymal transition (EMT) [13–15]. EMT has been proven to correlate closely with cancer progression by facilitating invasion of cancer cells [16–17]. In breast cancers, the functional synergy between TGF-β and HER2 has been characterized. It has been demonstrated that TGF-β cooperated with HER2 at various levels, including transcriptional regulation of the Smad target genes and pathways; activation of the PI3K/Akt pathway in a Smad-independent manner; modification of the tumor microenvironment by inducing the secretion of TGF-β, Erb2 ligands, and angiogenic mediators [18]. Given the established role of EMT in breast cancer progression [19], deciphering the biological function of TGF-β signaling in trastuzumab resistance and metastasis of HER2 positive breast cancer will provide novel insights into molecular mechanism underlying multifaceted malignant phenotypes of breast cancer.

LncRNAs are a class of transcripts longer than 200 nucleotides with extremely limited protein coding potential. Recently, many studies have demonstrated that lncRNAs had multiple functions in a wide range of biological process, such as proliferation, apoptosis, cell migration, and cell invasion [20–21]. Although lncRNAs have been reported to modulate tumor metastasis by mediating the prometastatic role of TGF-β and regulating EMT [22], and several lncRNA transcripts were involved in the biology of carcinogenesis in breast cancer [23–24], the biological roles of lncRNAs in the process of trastuzumab resistance in breast cancer are not well studied.

Induction and identification the phenotype of trastuzumab resistant SKBR-3 model 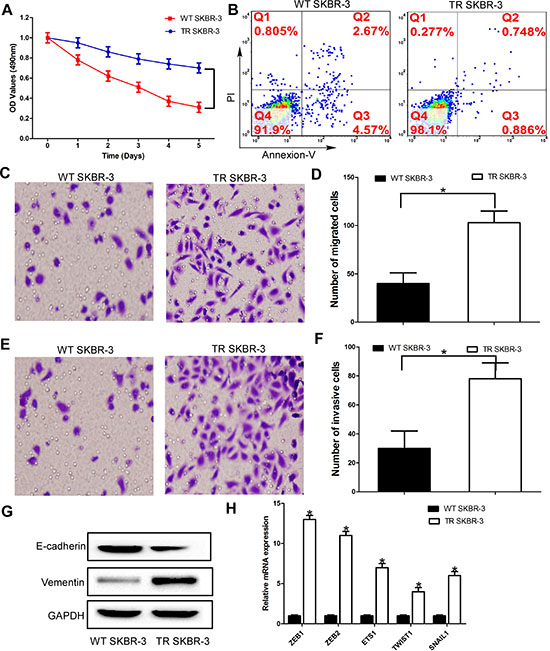 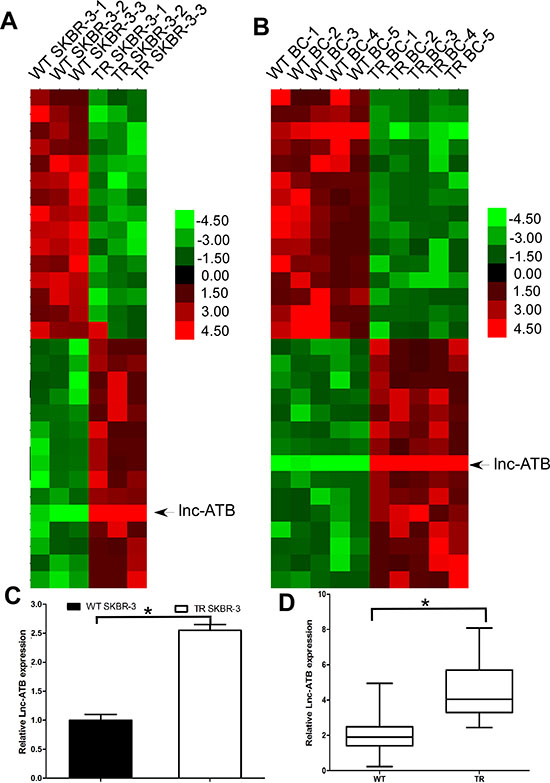 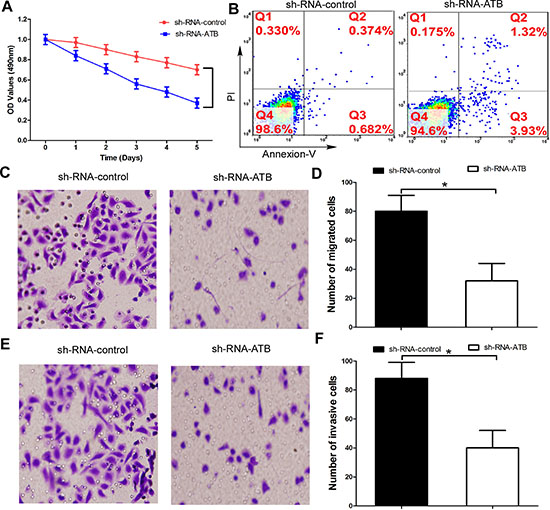 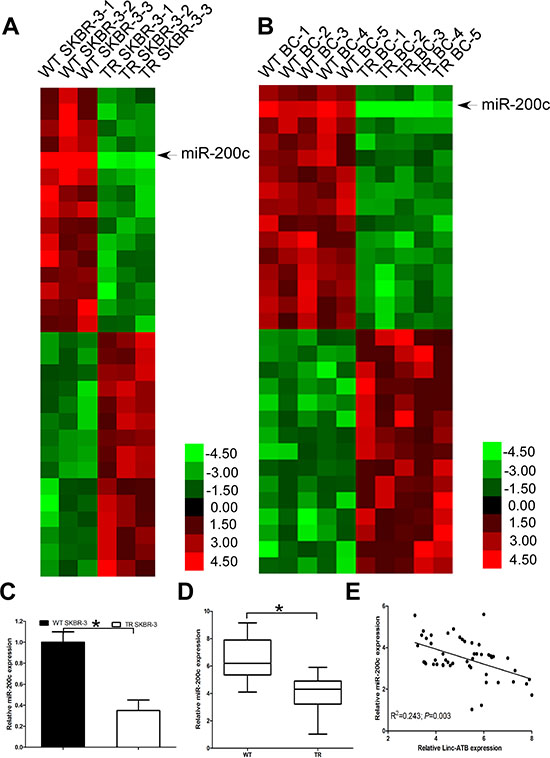 Because lnc-ATB shares regulatory miR-200c with ZEB1 and ZNF 217 which has been proven to be the direct targets of miR-200c in TR SKBR-3 cells, we wondered whether lnc-ATB could modulate ZEB1 and ZNF217. We found down-regulation of lnc-ATB could decrease the expression of ZEB1 and ZNF217 at mRNA and protein levels in TR SKBR-3 cells (Figure 6A and 6B). Additionally, lnc-ATB significantly correlated with the expression of ZNF217 and ZEB1 in the tissues of TR breast cancer patients (P = 0.025 and P < 0.001 respectively; Figure 6C and 6D). 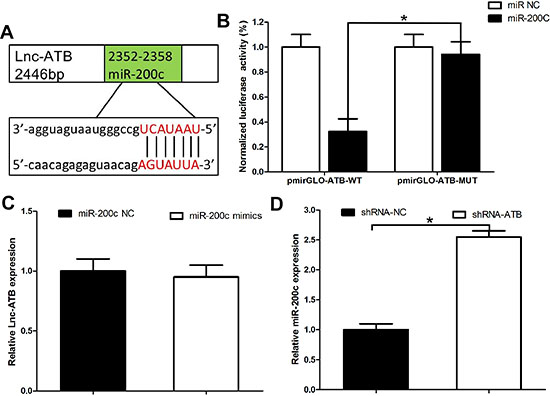 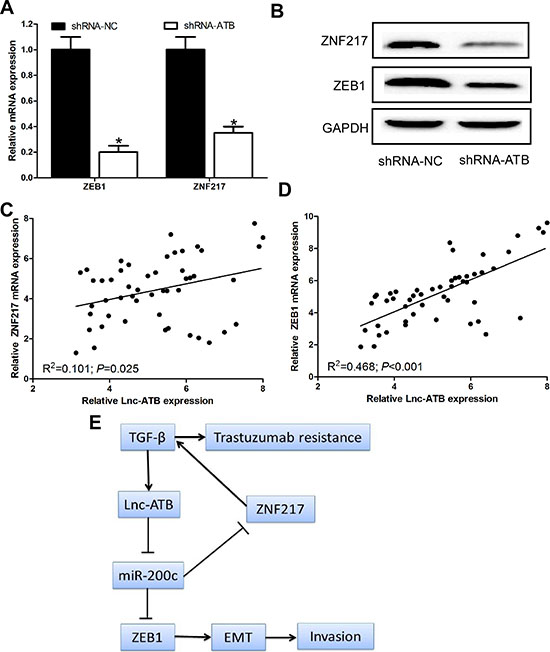 In order to further confirm our hypothesis, we investigated the relationship between lnc-ATB and ZEB1/ZNF217. We found lnc-ATB shared miR-200c response elements with ZEB1 which was the master inducers of EMT and ZNF217 which promoted TGF-β by transcriptionally activating TGF-β2 and TGF-β3 [29–30]. We observed down-regulated lnc-ATB was sufficient to reduce the expression of ZEB1 and ZNF217 in TR SKBR-3 cells. Notably, this role depends on the competitive binding with miR-200c, further indicating lnc-ATB functions as a ceRNA in breast cancer cells. Because there is a double negative feedback loop between miR-200c and ZEB1/ZNF217 [31], the upregulation of ZEB1 and ZNF217 by lnc-ATB could further augment the effects. More importantly, the expression of lnc-ATB was significantly associated with ZEB1 and ZNF217 expression in TR breast cancer patients. All these results proved lnc-ATB functions as a ceRNA by regulating ZEB1 and ZNF217 expression in breast cancer.

ZNF 217 is a candidate oncogene in breast cancer, and overexpression of ZNF217 was found to promote migration and invasion of breast cancer cells in vitro and stimulate the development of spontaneous lung or lymph node metastasis in vivo. More importantly, ZNF was confirmed to promote EMT and mediate direct up-regulation of TGF-β2 and TGF-β3 in autocrine loop [29]. HER2 converts TGF-β from a tumor suppressor to a tumor promoter, and exogenous as well as transduced TGF-β confers motility and invasiveness to MCF10A nontransformed human mammary epithelial cells stably expressing transfected HER2 [32–33]. And GDF15-mediated activation of TGF beta receptor-Src-HER2 signaling crosstalk was reported to be a novel mechanism of trastuzumab resistance [34]. Taken together previous studies and our results, we tend to confirm lnc-ATB could augment its effects on trastuzumab resistance in breast cancer by lnc-ATB/ZNF217/TGF-β positive feedback. Thus, it is more prone to develop trastuzumab resistance in the breast cancer patients whose lnc-ATB expression was elevated.

Human breast cancer SKBR-3 cell line was purchased from the Cell Bank of Chinese Academy of Sciences (Shanghai, China), where they were characterized by mycoplasma detection, DNA-Fingerprinting, isozyme detection and cell vitality detection. Cells were cultured in RPMI 1640 medium (Invitrogen, Carlsbad, CA) supplemented with 15% fetal bovine serum (FBS, Hyclone, Logan, UT) and maintained at 37°C in a humidified incubator with 5% CO2. Recombinant TGF-β2 (BioLegend, San Diego, CA) and Docetaxel (Sigma-Aldrich, St. Louis) were used for incubation with cells at working concentrations of 20 ng/ml and 4 nM, respectively. Trastuzumab (Herceptin) was obtained from Roche (Basel, Switzerland) and dissolved in sterile water. Trastuzumab-resistant (TR) cells were developed by continuous culture of SKBR-3 cells in the presence of 5 mg/ml trastuzumab for 6 months as reported.17 Thereafter, TR and parental (WT) SKBR-3 cells were cultured in parallel with or without trastuzumab, respectively.

Cell proliferation was analyzed in vitro with the tetrazolium salt 3-(4, 5-dimethylthiazol-2-yl)-2, 5-diphenyltetrazolium bromide (MTT) reagent. Briefly, 2000 cells from each group were plated in each well of five 96-well plates in 200 μL of medium. To analyze cell proliferation, 20 μL of MTT substrate at a concentration of 2.5 mg/mL in PBS was added to each well. The plates were then returned to a standard tissue incubator for an additional 4 h. The medium was then removed, and the cells were solubilized in 150 μL of dimethylsulfoxide for the colorimetric analysis (wavelength, 490 nm). One plate was analyzed immediately after the cells adhered (approximately 4 h after plating). Then, one plate per day was examined for the next 4 consecutive days.

TR SKBR-3 cells were transfected with lnc-ATB shRNA and shRNA control for 48 h, and the cells were then suspended in incubation buffer at a density of 1 × 106 cells/mL. The cells were incubated with Annexin V-FITC and propidium iodide (PI) (BD Bioscience, San Jose, CA) for 15 min in the dark at room temperature. Cell apoptosis was then analyzed using FACSCalibur (BD Biosciences, San Diego, CA, USA).

Cell migration and invasion capacity were measured using transwell migration assays (Millipore, Billerica, MA) in vitro. The TR SKBR-3 cells were transfected with lnc-ATB shRNA and shRNA control for 48 h, and then the cells were suspended in RPMI-1640 with 10 g/L BSA at a density of 1X106 cells/mL. Then, cell suspensions (150 μL) were seeded in the upper chamber with aporous membrane coated with (for the transwell invasion assay) or without (for the migration assay) Matrigel (BD Bioscience, San Diego, CA). To attract the cells, 500 μL of RPMI-1640 with 10% serum was added to the bottom chamber. After allowing the cells to migrate for 24 h or to invade for 48 h, the penetrated cells on the filters were fixed in dried methanol and stained in 4 g/L crystal violet. The numbers of migrated or invasive cells were determined from five random fields using a microscope (Olympus) at × 10 magnification.

Quantitative RT-PCR for miRNAs and mRNAs

Statistical analysis was performed using IBM SPSS statistical software (version 21.0). The differences in characteristics between the 2 groups were examined by the χ2 test and Fisher’s exact test. All P-values were determined from 2-sided tests, and statistical significance was based on a P-value of 0.05.

This study was approved by the Research Ethics Committee of No.202 of PLA. Written informed consent was obtained from all of the patients. All specimens were handled and made anonymous according to the ethical and legal standards. 50 cases of herceptin-sensitive and herceptin-resistant breast cancer patients based on accepted clinicopathological were enrolled in this study. The inclusion criteria of herceptin-resistant breast cancer patients were as following: 1, primary herceptin-resistance: the condition of patients who recieved initial trastuzumab treatment (12 weeks or less) progressed; 2, secondary herceptin-resistance: the condition of patients who reveived innitial trastuzumab treatment was under control, but the disease was progressed during the treatment (>12 weeks).

The authors thank the local doctors and the patients who participated in our study.

2. Gonzalez-Angulo AM, Morales-Vasquez F, Hortobagyi GN. Overview of resistance to systemic therapy in patients with breast cancer. Advances in experimental medicine and biology. 2007; 608:1–22.

18. Wang SE. The Functional Crosstalk between HER2 Tyrosine Kinase and TGF-beta Signaling in Breast Cancer Malignancy. Journal of signal transduction. 2011; 2011:804236.