Breast cancer is one of the most frequently diagnosed cancer and the leading cause of cancer death among women worldwide [1]. Despite conventional therapies (surgery, chemo-radiotherapy and hormonal therapy) have improved the survival rates in breast cancer patients [2-4], recurrence and metastasis are still inevitable. CS-like cells (also known as stemloids) attract much more attention owing to their contribution to therapy resistance, cancer metastasis and relapse in breast cancer [5-8]. CS-like cells are characterized by the expression of biomarkers such as CD44high/CD24low and aldehyde dehydrogenase1 (ALDH1) [8, 9]. Activated signaling pathways such as Hedgehog (Hh), Wnt/β-catenin, and Notch play key roles in the regulation of self-renewal and differentiation in breast CS-like cells [10].

Flubendazole, a member of benzimidazole families, has the typical benzimidazole moiety but with an added fluorine atom as the major structure, which makes it different from other benzimidazoles [21]. Flubendazole is widely used as a safe and efficacious anthelmintic drug for gastrointestinal parasites control in human, rodents and ruminants [21-25]. It disrupts tubulin polymerization by showing preference for binding to nematode tubulin rather than the tubulin in host [26, 27]. Recent studies report that flubendazole has additional function in inhibiting cell growth in leukemia and intestinal cancer [28, 29]. Flubendazole suppresses cell proliferation in vitro, delays tumor formation in xenograft models and displays preclinical activity by inhibiting tubulin polymerization in leukemia and lymphoma [29]. Notably, vinblastine resistant cells overexpressing P-glycoprotein are sensitized to flubendazole, suggesting that flubendazole is able to overcome vinblastine resistance in leukemia and lymphoma [29]. 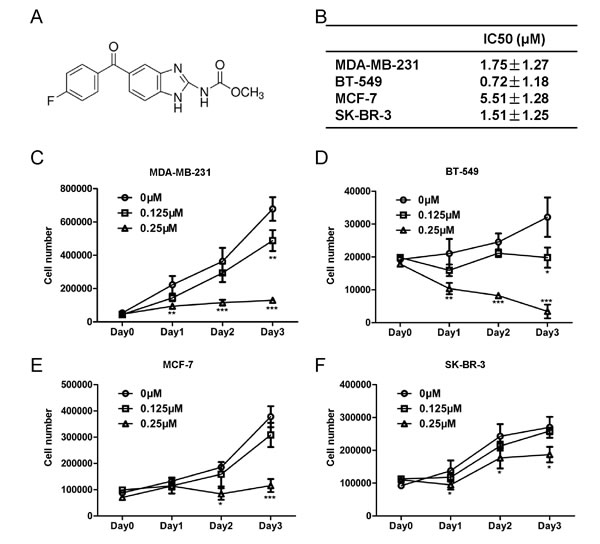 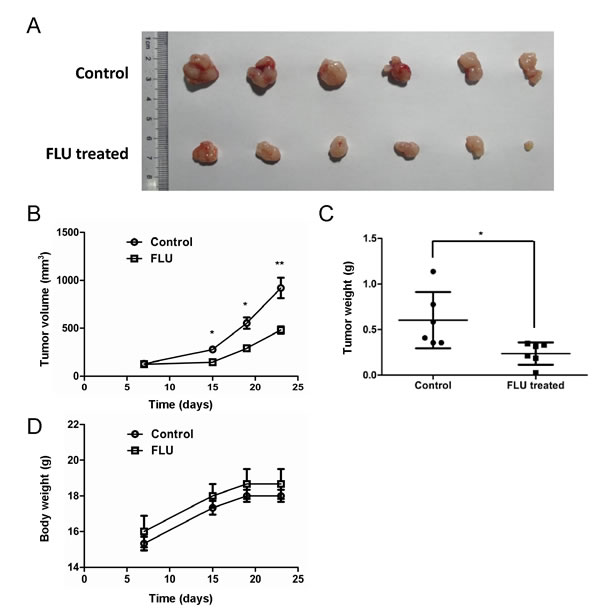 Figure 2: Flubendazole delays tumor growth in xenograft model. (A) Tumors were generated with MDA-MB-231 breast cancer cells. MDA-MB-231 cells were inoculated into the right flank of nude mice. When the tumors developed for 7 days, mice were randomly distributed into two groups, flubendazole treated (25 mg/kg) or vehicle treated. (B) Tumor growth curves were monitored during the experimental period (n=6). (C) Tumor weight was presented by scatter plot. (D) The body weight of the mice was monitored during the experiment. Data represent the mean ± S.D. of three independent experiments (*p<0.05, **p<0.01, Student’s t test). 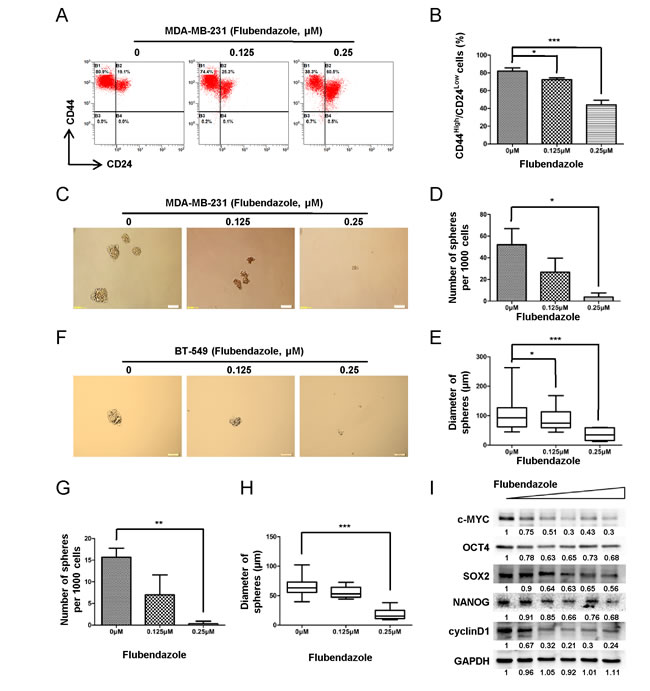 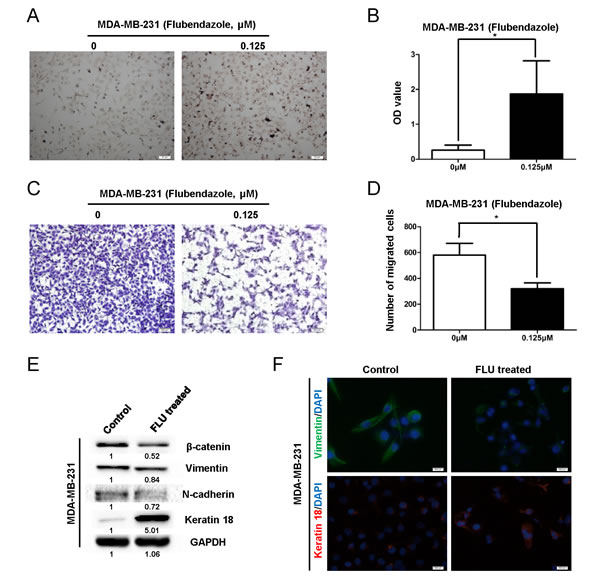 Figure 4: Flubendazole induces differentiation and inhibits migration in breast cancer cells. MDA-MB-231 cells were treated with indicated concentration of flubendazole or vehicle control for 3 weeks. (A) The treated cells were subjected to Oil Red-O staining to identify lipid droplets. Images were taken under phase contrast microscopy (scale bar=50 μm). (B) Statistical results were presented as mean ± S.D. for three independent experiments (*p<0.05, Student’s t test). (C) MDA-MB-231 cells with or without flubendazole treatment (0.125 μM, 3 weeks) were subjected to transwell assay as described in the methods. The representative images from three independent experiments were displayed (scale bar=500 μm). (D) The data were expressed as mean ± S.D. for experiments performed three times (*p<0.05, Student’s t test) compared to control groups. (E) The expression of β-catenin, N-cadherin, Keratin 18 and Vimentin in MDA-MB-231 cells was identified by western blot assay before and after flubendazole treatment (0.125 μM, 3 weeks). (F) Expression of Vimentin and Keratin 18 was analyzed by IF analysis (scale bar=500 μm).

We also studied whether flubendazole blocked cell cycle progression in breast cancer cells. MDA-MB-231 cells were treated with 0, 0.25 and 0.5 μΜ flubendazole for 24 hr and then subjected to cell cycle profile analysis by flow cytometer. The percentage of G0/G1 (2N) phase cells was decreased from 58.31 ± 1.46% to 34.98 ± 3.97% and 16.44 ± 2.85% with the increasing flubendazole concentration (from 0 to 0.5 μM), (Fig. 5D-E). In contrast, the percentage of cells with 4N DNA content was increased from 25.49 ± 1.91% to 42.93 ± 3.65% and 55.55 ± 3.99% (Fig. 5D-E). The same phenomenon was also observed in BT-549 cells (Fig. S4D-E). Moreover, cell cycle markers were identified by western blot. In response to flubendazole treatment, both MDA-MB-231 and BT-549 cells showed increased phosphorylation of cdc2 at threonine 161 and decreased phosphorylation at tyrosine 15. These results indicated continuous cdc2 activation resulted from mitotic arrest. The increased expression of cyclinB1 and decreased expression of cyclinE suggested a G2/M arrest by flubendazole treatment (Fig. 5F and Fig. S4F). Taken together, these data demonstrated that flubendazole arrested cell cycle at G2/M phase through inhibiting tubulin polymerization. 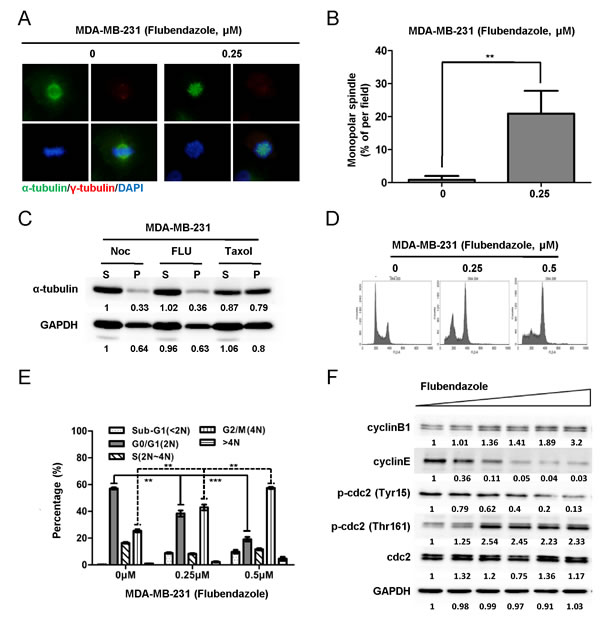 Figure 5: Flubendazole arrests cell cycle at G2/M phase and induces monopolar spindle formation through inhibiting tubulin polymerization in breast cancer cells. (A) MDA-MB-231 cells were treated with vehicle (DMSO) and 0.25 μM flubendazole (dissolved in DMSO) for 24 hr, respectively. The expression of α-tubulin (green) and γ-tubulin (red) was analyzed by IF assay. Nuclear was stained with DAPI (blue). Morphological changes were observed under fluorescence microscopy (40×). (B) Graphs were statistically analyzed from five random fields (**p<0.01, Student’s t test). (C) MDA-MB-231 cells were treated with nocodazole, flubendazole and taxol for 24 hr, respectively. Then, the cells were lysed and fractionated from cytosol (supernatant, S) to cytoskeletal (pellet, P) extracts. The extracts were subjected to western blot analysis for α-tubulin and GAPDH expression analysis. The quantification of blot density was shown in the figure. (D) MDA-MB-231 cells were treated with 0, 0.25, and 0.5 μM flubendazole for 24 hr, respectively. Cells were fixed and stained with PI. Cell cycle was analyzed on FACS Calibur flow cytometer. (E) The statistical results of three independent experiments were shown as mean ± S.D. (**p<0.01, ***p<0.001, Student’s t test). (F) MDA-MB-231 cells were treated flubendazole in increasing doses (from 0 μM to 2 μM) for 24 hr and subjected to western blot to analyze cyclinB1, cyclinE, p-cdc2 (Tyr15), p-cdc2 (Thr161) and cdc2 expression.

We further investigated whether flubendazole enhanced the cytotoxicity of conventional chemotherapy drugs such as fluorouracil and doxorubicin. MDA-MB-231 cells were treated with increasing concentration of fluorouracil (from 0 to 5 μg/ml) or doxorubicin (from 0 to 0.03 μM) with or without flubendazole. Cell viability was measured by MTT assay after 72 hr of incubation (Fig. 6A-B). Flubendazole treatment enhanced significantly the cytotoxic effect of fluorouracil and doxorubicin in breast cancer cells. The same results were observed in BT-549 cells (Fig. S5A-B). 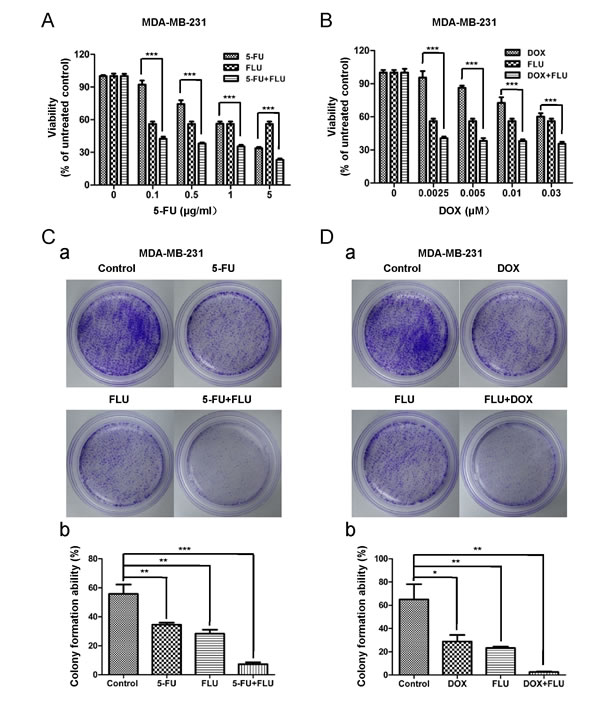 Recent studies report that the first-line drugs for treating other disease might be repurposed for targeting CS-like cells in breast cancer [32-35]. For instance, metformin, a hypoglycemic drug, reduced the incidence of various cancers in diabetic patients [32, 33]. Metformin suppressed tumor growth in xenografts by preferentially inhibiting nuclear translocation of NF-κB and phosphorylation of STAT3 in cancer stem cells [34]. All-trans retinoic acid, another first-line drug for leukemia, suppressed the mammosphere-forming ability which was correlated with the reduced expression of SOX2 and elevated expression of its antagonist CDX2 in breast CS-like cells [35].  The FDA approved flubendazole is extensively used as an efficacious anthelmintic drug in gastrointestinal parasites disease [21-23]. Here, we demonstrated that flubendazole significantly reduced CD44high/CD24low population (Fig. 3A), sphere formation (Fig. 3C) and stem cell related genes (c-myc, oct4, sox2, nanog and cyclinD1) expression (Fig. 3I). Thus, flubendazole could be repurposed as a novel agent for targeting CS-like cells in breast cancer therapy.

Flubendazole has been extensively studied for antihelmintic use in animal and humans with favorable toxicology profiles [22, 25, 46]. Consistently, our data displayed that flubendazole treatment (25 mg/kg, daily) did not alter gaining weight of nude mice during the experiment compared with the control group (Fig. 2D), indicating low toxicity to the mice. However, poor absorption is still a challenge for clinical application of flubendazole [29]. Flubendazole produces low plasma concentrations in hosts due to its high lipophilicity [22, 24]. Recent studies report that solid dispersion technique and emulsion cross-linking volatile technique are utilized to enhance the bioavalibility of albendazole that has the similar absorption properties and structure with flubendazole [47-49]. These methods for improving bioavalibility shed lights on the application of flubendazole in the clinical test.

MDA-MB-231, BT-549, SK-BR-3 and MCF-7 cells were seeded in 96-well microplates and cultured with various doses of flubendazole for 24, 48 and 72 hr, respectively. MTT solution (5 mg/ml, Sigma Aldrich) was added to cells and incubated for another 3 hr at 37 °C. The optical densities (OD) were measured at absorbance 570 nm. Cell proliferation was performed by cell counting assay. We seeded the same amount of cells into 24-well plate and counted for 3 continuous days monitoring the cell growth.

MDA-MB-231 cells (2×106) were inoculated into the right flank of 4~6 weeks old female nude mice (n=6), all of which developed tumors in 7 days with size of ~100 mm3. The mice were randomly distributed into two groups to receive 25 mg/kg flubendazole in 0.9% NaCl and 0.01% Tween-80 or vehicle control (0.9% NaCl and 0.01% Tween-80) once daily by intraperitoneal injection. Tumor volume (a×b2/2; a represented the greatest diameter, b was the diameter perpendicular to a) was measured by calipers twice every week. Other indicators of general health such as body weight, feeding behavior and motor activity of each animal were also monitored. After administration of flubendazole or vehicle for 16 days, the mice were euthanized and the tumor xenografts were immediately dissected, weighted, stored and fixed. Investigation has been conducted in accordance with the ethical standards and according to the Declaration of Helsinki and according to national and international guidelines and has been approved by the institutional animal care and use committee of Dalian Medical University.

Cells exposed to indicated concentration of flubendazole for 72 hr, were trypsinized, washed twice with PBS by centrifugation (1,000 rpm, 5 min), and blocked (0.5% BSA/PBS) for 10 min. Collected cells were then incubated with anti-CD24 PE (eBioscience) and anti-CD44 FITC (eBioscience) or isotype controls antibodies according to manufacturer’s instructions for 30 min at 4 °C protected from light. Then, cells were suspended in 1 ml PBS and subjected to flow cytometry analysis (Beckman). Side-scatter and forward-scatter profiles were used to eliminate cell doublets [51]. The statistical results of three independent experiments were presented.

Dissociated single cells (1,000) were seeded in 6-well ultra-low attachment plates (Corning Costar). Cells were cultured with serum-free DMEM/F-12 (Invitrogen Corp) supplemented with 20 ng/ml epithelial growth factor (EGF, Sigma Aldrich), 20 ng/ml basic fibroblast growth factor (bFGF, PeproTech) and B27 in the absence and presence of flubendazole for 9 days. All spheres were photographed by invert microscope (10×, Olympus). The number and diameter of spheres were calculated by Image pro plus 6.0 (Olympus).

MDA-MB-231 cells were treated with 0.125 μΜ flubendazole or vehicle control for 3 weeks. Oil-Red-O staining for the detection of lipid droplets was performed as previously described [31]. Images were obtained under microscope.

For the migration assay, 5,000 cells with or without indicated concentration of flubendazole were seeded on the matrigel coated Membrane in the upper chamber (24-well insert, 8 μm, Corning Costar). DMEM supplemented with 20% serum was used as an attractant in the lower chamber. After incubated for 24 hr, cells that migrated through the membrane were fixed with 70% ethanol and stained with 0.4% crystal violet (Shanghai Sangon Company). The stained cell images were captured by microscope, and five random fields at 10× magnification were counted. Results represented the average of triplicate samples from three independent experiments [51].

The separation of insoluble polymerized microtubules from soluble tubulin dimmers were performed as described previously [52]. In the study, cells were treated with flubendazole (0.25 μM), nocodazole (0.25 μM) and taxol (20 nM) for 24 hr, respectively. Then, the floating mitotic cells were harvested. Equal numbers of mitotic cells (3×106) were lysed for 10 min at 4 °C in 30 μl lysis buffer containing 20 mM Tris-HCl (pH = 6.8), 1 mM MgCl2, 2 mM EGTA, 0.5% NP40, 2 mM PMSF and fresh cocktail. Proteins in the supernatants (containing soluble tubulin) were separated from pellets (containing insoluble tubulin) by centrifugation (15,000g, 10 min). The pellets were continuingly lysed in 30 μl of RIPA, and centrifuged at 15,000g for 10 min. Then, the supernatant (insoluble tubulin) were collected. Equal amounts of soluble and insoluble samples were subjected to western blot analysis. Primary antibodies for α-tubulin (Santa Cruz, 1:2000) and GAPDH (Kang Chen bio-tech, 1:5000) were used at manufactures recommended dilutions.

All authors claimed no conflicts of interest.