Lung cancer is the leading cause of cancer-related death worldwide, accounting for more than one million deaths every year. [1, 2] Non-small-cell lung cancer (NSCLC) constitutes approximately 85% of lung cancers and about 40% of patients with newly diagnosed NSCLC have advanced disease. [1] In the past decade, the standard of care for patients with advanced disease was platinum-based chemotherapy, which improved survival, quality of life and symptom control compared with supportive care. [3] However, the median overall survival is only about a year; only 3.5% of patients are alive five years after diagnosis. Chemotherapy is also associated with high morbidity. [4] In recent years, identification of “druggable” oncogenic alterations such as mutations in EGFR and ALK translocations, and development of drugs that specifically target these mutations have led to a substantial improvement in the prognosis of patients with advanced lung cancer. [5] However, “druggable” alterations have been detected in less than half of all advanced NSCLC patients. [6] Mutations in the KRAS oncogene, for example, accounts for 20–30% of lung adenocarcinomas, yet no targeted agents are currently available. Hence there is an unmet need to develop new, effective and minimally toxic targeted therapies in advanced NSCLC.

Mesothelin is a 40-kDa cell surface glycoprotein that is present on normal mesothelial cells lining the pleura, peritoneum and pericardium. [7] Mesothelin expression in normal human tissues is observed only in a single layer of mesothelial cells lining the pleura, peritoneum and pericardium, surface epithelial cells of the ovary, tunica vaginalis, rete testis and the tonsilar and fallopian tube epithelial cells. [8] However, mesothelin is highly expressed in several cancers, including epitheloid mesotheliomas, pancreatic, biliary adenocarcinomas, gastric and ovarian cancers. [8–11] The high expression of mesothelin in cancers have prompted its therapeutic targeting using a variety of strategies including immunotoxins, monoclonal antibodies, antibody drug conjugates, vaccines and adoptive T cell therapy. [12–14] We recently demonstrated major and durable tumor regressions in chemotherapy-refractory patients with advanced epitheliod mesothelioma using the anti-mesothelin immunotoxin SS1P. [15]

Conceptually, SS1P and other mesothelin-targeted therapies might also confer efficacy in other tumor types that over-express mesothelin. Identifying these cancers could thus expand the therapeutic utility of these therapies. Mesothelin expression has been demonstrated in approximately 30–70% of lung adenocarcinoma. [16–20] However, these studies were retrospective, analyzed a limited number of samples, did not provide clinical information and did not study the patterns of expression in detail.

Given the paucity of data and the heterogeneous and conflicting results of prior investigations, we sought to determine the expression patterns and prognostic value of mesothelin in advanced lung adenocarcinoma and the association of mesothelin expression with other molecular alterations and clinico-pathologic variables. We demonstrate here that 24% of advanced lung adenocarcinoma express high levels of mesothelin, and that high mesothelin expression is associated with EGFR wild-type and mutant KRAS and, independent of the mutation status, is associated with decreased overall survival. Our results suggest that mesothelin targeted therapies could be useful in patients with KRAS mutant lung cancer, a subtype for which no targeted therapies are currently available.

From February 2011 to December 2012, 272 patients with NSCLC enrolled and underwent molecular profiling in the pilot trial of molecular profiling and targeted therapies in advanced thoracic malignancies at the Center for Cancer Research, National Cancer Institute. [21] Two hundred and eleven had adenocarcinoma histology with 179 having advanced disease (stages III or IV) at diagnosis. Ninety three patients had adenocarcinoma histology, stage III or IV at diagnosis and had adequate FFPE samples available for further studies.

The clinicopathological characteristics are summarized in Table 1. The median age of all patients was 61 years and 53 (57%) patients were female. The patient population was predominantly Caucasian (74%) and 35% were never-smokers. Oncogenic alterations in EGFR, KRAS mutations and ALK translocations were found in 25%, 29% and 11% patients respectively. 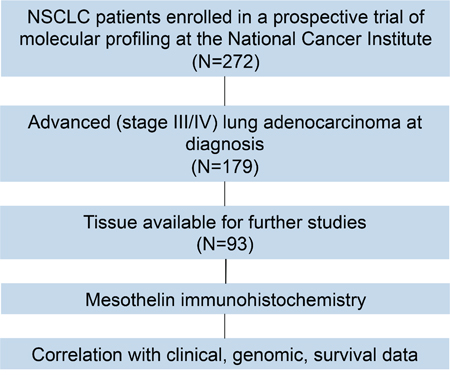 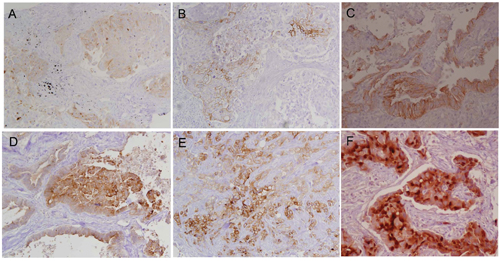 In this study, we used prospectively obtained clinical and pathological data to characterize mesothelin expression in lung cancer. We evaluated the intensity, and the percentage of cells expressing mesothelin in tissue obtained from 93 patients with advanced lung adenocarcinoma who underwent molecular profiling for potentially actionable genes using a multi-platform approach. We found that approximately 50% of advanced lung adenocarcinomas express mesothelin and high mesothelin expression, defined as mesothelin positivity in more than 25% of cells, was associated with inferior survival. Importantly, we found that high-expression of mesothelin was strongly associated with mutant KRAS and wild-type EGFR.

The results of this study and previous work by others provide strong rationale that anti-mesothelin targeted therapy should be explored as a therapeutic modality in advanced lung adenocarcinomas. Our prior studies have demonstrated that mesothelin mRNA and protein are present in a substantial number of lung adenocarcinoma cell lines and that SS1P, an anti-mesothelin recombinant immunotoxin, was cytotoxic to mesothelin expressing lung cancer cell lines with IC50 values ranging from 2 to 5 ng/mL. [29] We have recently shown that in patients with chemotherapy refractory malignant mesothelioma, SS1P in combination with pentostatin and cyclophosphamide leads to durable tumor regression. [15] These lines of compelling evidence suggest that SS1P may confer clinical activity in mesothelin-expressing lung adenocarcinomas. Several other mesothelin-targeted therapies including a vaccine [30], antibody drug conjugate [31] and a monoclonal antibody [32] are undergoing phase I/II clinical trials.

The current study provides a strong rationale to target mesothelin in advanced lung adenocarcinoma and suggest that clinical trials of mesothelin-directed therapies in lung cancer should focus on patients with KRAS mutations, the most commonly mutated oncogene in NSCLC and one which has proven intractable even in the era of targeted therapy.

Patients were prospectively enrolled in a pilot trial of molecular profiling and targeted therapies in advanced thoracic malignancies (Figure 1) (ClinicalTrials.gov Identifier: NCT01306045). [21] Main eligibility criteria were histologically confirmed, advanced stage lung cancer and Eastern Cooperative Oncology Group Performance Status ≤ 2. Patients had to have biopsiable disease and be willing to undergo biopsy for molecular profiling or have formalin-fixed paraffin-embedded (FFPE) tissue blocks suitable for molecular profiling analysis. Patients underwent new tumor biopsies when possible but archival tumor samples were also used. Tumor samples were screened for mutations in AKT1, BRAF, EGFR, HER2, KRAS, NRAS, and PIK3CA by pyrosequencing; HER2 amplification and ALK translocation were assessed by Fluorescence in situ hybridization (FISH). Patients who did not have a FFPE sample available for mesothelin immunohistochemistry (IHC) were excluded from this analysis. All patients were followed for survival. The protocol was approved by the National Cancer Institute Institutional Review Board.

Mesothelin IHC was performed on tumor samples obtained using monoclonal antibody 5B2 (Novocastra/Leica, Bannockburn, IL) at 1:40 dilution. One slide was tested for each case. Heat-induced epitope retrieval (20 mins in citrate buffer, pH 6.0) we performed prior to incubation with primary antibody.. The detection was performed with Ventana Ultra View detection kit with DAB chromogen. All immunostaining was done using positive and negative controls and results were highly concordant.

Immunohistochemical staining was evaluated by a pathologist (MM) with special expertise in evaluating anti-mesothelin IHC who was blinded to the clinical and molecular data. The positivity (strength of labeling) was assessed as negative (no labeling), weak 1+, moderate 2+, and strong 3+, and the percentage of positive cells was also estimated. High mesothelin expression was defined as mesothelin expression in > 25% cells.

This research was supported in part by the Intramural Research Program of the NIH, National Cancer Institute, Center for Cancer Research. We would like to thank the patients, research nurses and investigators of the pilot trial of molecular profiling and targeted therapies in advanced thoracic malignancies.

9. Ordonez NG. Value of mesothelin immunostaining in the diagnosis of mesothelioma. Modern Pathol. 2003; 16:192–7.

16. Miettinen M, Sarlomo-Rikala M. Expression of calretinin, thrombomodulin, keratin 5, and mesothelin in lung carcinomas of different types: an immunohistochemical analysis of 596 tumors in comparison with epithelioid mesotheliomas of the pleura. Am J Surg Pathol. 2003; 27:150–8.

18. Ordonez NG. The immunohistochemical diagnosis of mesothelioma: a comparative study of epithelioid mesothelioma and lung adenocarcinoma. Am J Surg Pathol. 2003; 27:1031–51.

19. Ordonez NG. The diagnostic utility of immunohistochemistry in distinguishing between epithelioid mesotheliomas and squamous carcinomas of the lung: a comparative study. Mod Pathol. 2006; 19:417–28.