BCL6B is a potential tumor suppressor in human gastric cancer, but the regulation and mechanism of BCL6B in human hepatocellular carcinogenesis remain unclear. This study is to explore the epigenetic change and mechanism of BCL6B in human hepatocellular carcinoma (HCC). Nineteen hepatic cancer cell lines, 50 cases of adjacent tissue and 149 cases of HCC samples were employed. BCL6B is methylated in 100% (19/19) of human HCC cell lines, 40.0% (20/50) of adjacent tissue samples and 86.6% (129/149) of primary cancer samples. Methylation of BCL6B is associated with HBV positive (p < 0.05). But no association was found with age, sex, tumor size, differentiation, TNM stage, recurrence and survival. Loss of BCL6B expression was found in 19 of completely methylated HCC cell lines. BCL6B was re-expressed after 5-aza-2′-deoxycytidine treatment. Restoration of BCL6B expression suppressed cell proliferation, induced apoptosis and G1/S arrest in HCC cells. The expression of EGR1, a key component of p53 signaling, was increased after re-expression BCL6B in HCC cells. Re-expression of BCL6B activated p53 signaling and sensitized HCC cells to 5-fluorouracil. BCL6B is frequently methylated in human HCC and the expression of BCL6B is regulated by promoter region hypermethylation. BCL6B activates p53 signaling by increasing EGR1 expression in HCC.

Hepatocellular carcinoma (HCC) is the fifth most malignant cancer and the third leading cause of cancer-related death worldwide [1, 2]. Even through improved interventional and surgical treatment, The 5-year survival rate is less than 15%. The major reason is cancer recurrence and metastasis [3–5]. Emerging evidence indicates that epigenetic alterations, particularly inactivation of tumor suppressor genes or tumor-related genes via promoter region hypermethylation, play an important role in the development and progression of HCC [6–9]. B cell CLL/lymphoma 6 member B (BCL6B) is a homologue of B cell CLL/lymphoma 6 (BCL6). It is located on chromosome 17p13.1, a region of 800 bp next to p53 gene. BCL6B was regarded as a potential tumor suppressor and methylation of BCL6B may serve as a poor prognosis marker in gastric cancer [10–12]. In this study, we analyzed the epigenetic changes and the mechanism of BCL6B in hepatocellular carcinogenesis.

EGR1 was up-regulated by BCL6B in HCC cells

To understand the mechanism of BCL6B on HCC carcinogenesis, gene expression microarray was employed in this study. As shown in Figure 4A, 167 genes were up-regulated and 63 genes were down-regulated over 3 times after re-expression of BCL6B in SNU449 cells. Among these genes, HMGA2, CLDN1, TFPI2, KIAA0101 and EGR1 are cancer related genes according to Diseases Association Analysis (http://bioinfo.vanderbilt.edu/webgestalt/). HMGA2, CLDN1, TFPI2 and EGR1 are up-regulated for 5, 3.3, 4.8 and 31.4 times, and KIAA0101 was down-regulated for 3.2 respectively (Figure 4B). Even through, the tendency of expression changes of these genes, which detected by quantitative RT-PCR, was similar with microarray analysis (Supplementary Figure S1). Apparent increasing expression was only found in EGR1 gene by semi-quantitative RT-PCR and western blot in BCL6B re-expressed HepG2 and SNU449 cells (Figure 4C). 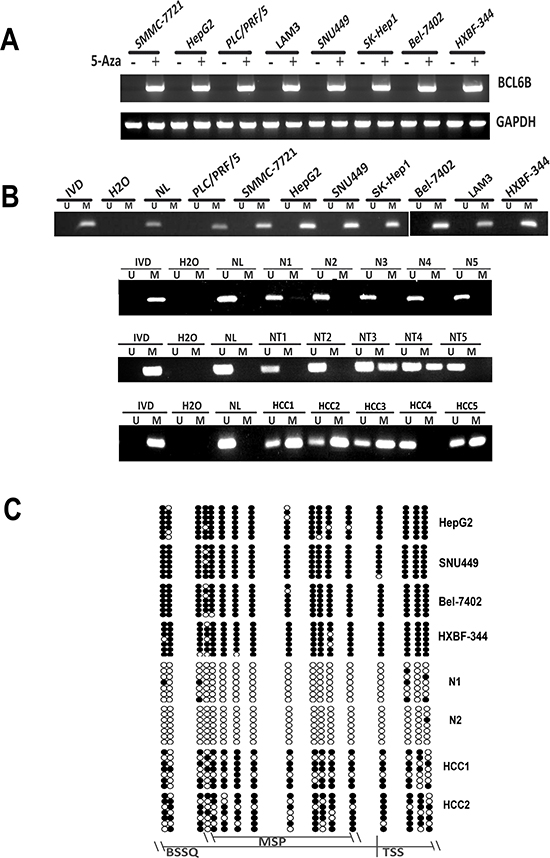 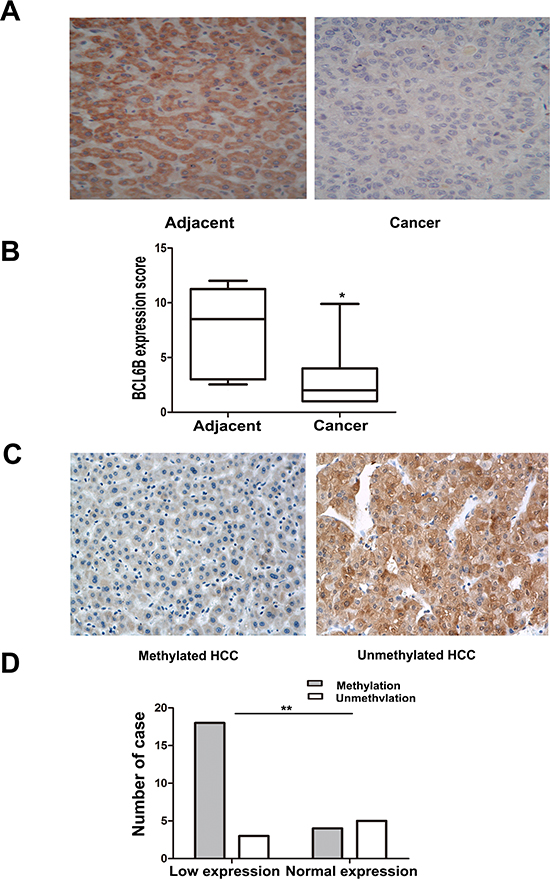 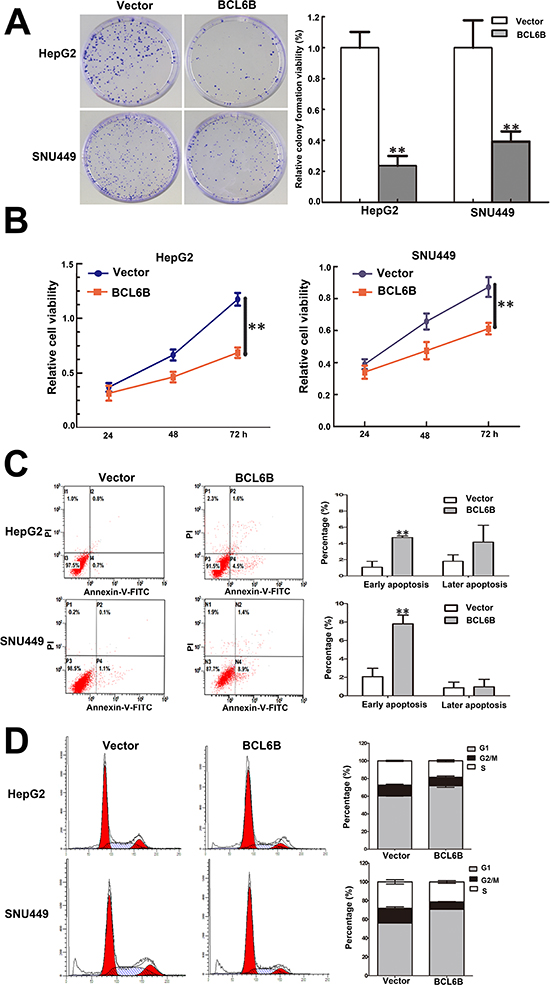 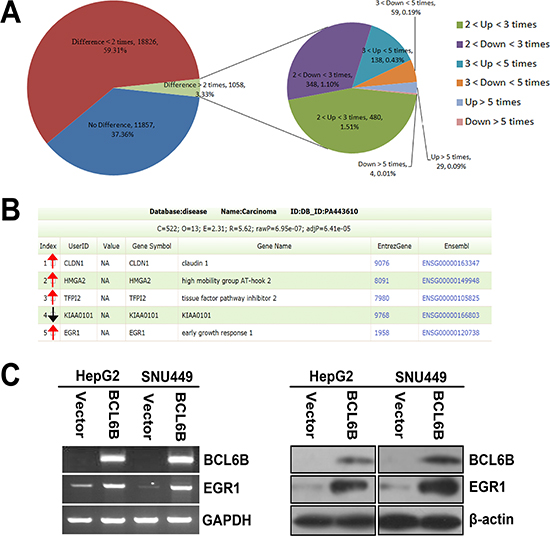 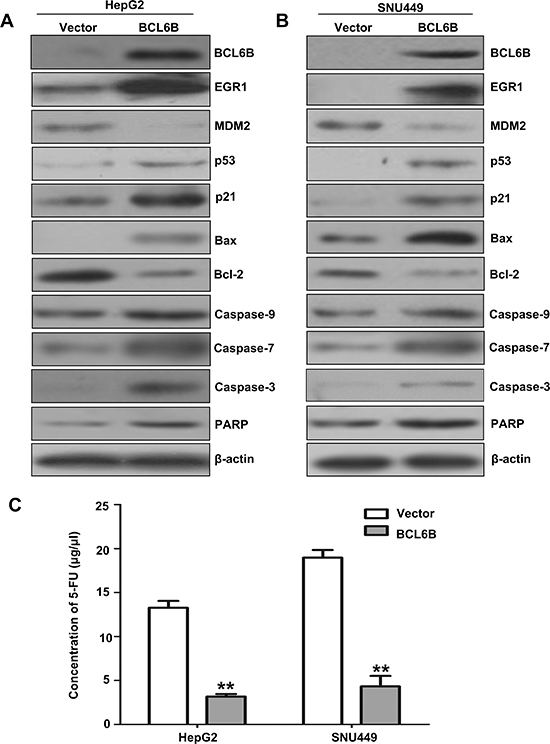 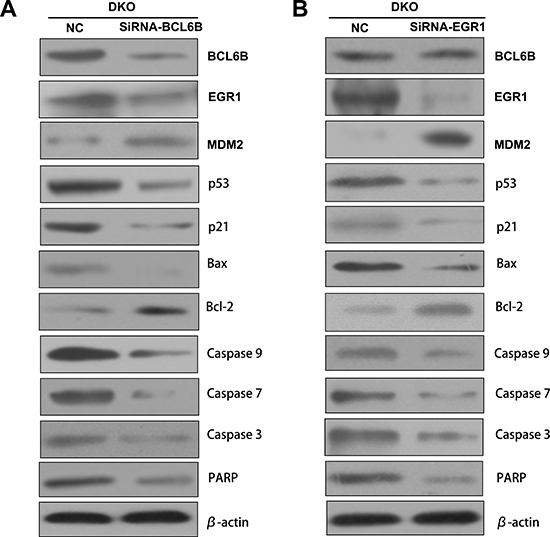 The tumor suppressor p53 maintains DNA integrity by transcriptionally activating genes such as p21 (CDKN1N) and GADD45a, the products of which induce cell-cycle arrest in response to DNA damage [20–22]. However, depending on the cellular context and the nature of the DNA damage, p53 can trigger elimination of the damage cells by promoting apoptosis through the induction of pro-apoptosis genes, such as Bax, and the down-regulation of anti-apoptosis Bcl2 [23, 24]. In vitro studies have reported that loss of p53 function reduces cellular sensitivity to 5-FU [25, 26]. Disrupting both alleles of TP53 or Bax in colon cancer cell line made the cells strikingly resistant to apoptosis induced by 5-FU compared with the parental line [25, 27, 28]. 5-FU is widely used for cancer treatment and still the mainstay of chemotherapy. Apoptosis was induced by activating p53 signaling after restoration of BCL6B expression in HepG2 and SNU449 cells. To see if BCL6B is involved in 5-FU sensitivity in HCC cells, the sensitivity of HepG2 and SNU449 cells to 5-FU was analyzed before and after re-expression of BCL6B. The IC50 of 5-FU was 13.27 ± 0.77 vs. 3.18 ± 0.28 μg/ml (p < 0.01) in HepG2 and 18.98 ± 0.86 versus 4.33 ± 1.18 μg/ml (p < 0.01) in SNU449 cells before and after restoration of BCL6B expression (Figure 5C). The results suggest that BCL6B sensitized HCC cells to 5-FU.

BCL6B is frequently methylated in human hepatocellular carcinoma and the expression of BCL6B was regulated by promoter region hypermethylation. It suggests that BCL6B is a potential HCC detection marker and BCL6B methylation may involved in hepatocellular carcinogenesis. Increasing evidence reveals that viral genes are one of the key players in regulating DNA methylation. Particularly in cancers closely associated with the hepatitis B virus, simian virus 40 (SV40), and Epstein-Barr virus [29]. In vitro, HBx has been documented to disturb the host DNA methylation system by up-regulating DNMT expression and activities, which in turn results in hypermethylation and repression of some tumor suppressor genes (insulin-like growth factor binding protein-3 gene, E-cadherin), thus increasing tumor susceptibility [29–31]. Previous studies have shown that HCC is associated with hypermethylation of several tumor suppressor genes [32, 33]. We and other groups have shown that some genes are preferentially methylated in HCV-related HCC [6, 34]. In this study, we found that BCL6B methylation is related to HBV positive HCC. The result further suggests that HBV may promote hepatocellular carcinogenesis by inducing promoter region methylation in tumor suppressor. Further study found that BCL6B suppresses cell proliferation and induces apoptosis and G1/S arrest in HCC cells. To further understand the mechanism of BCL6B on hepatocellular carcinogenesis, gene expression microarray was employed. By analyzing the expression changes of genes before and after re-expression of BCL6B in methylated HCC cell lines, 167 genes were up-regulated and 63 genes were down-regulated over 3 times after re-expression of BCL6B in SNU449 cells. Among these genes, HMGA2, CLDN1, TFPI2, KIAA0101 and EGR1 are cancer related genes according to Diseases Association Analysis and increased expression of EGR1 was confirmed by further semi-quantitative RT-PCR, quantitative RT-PCR and western blot in BCL6B re-expressed HepG2 and SNU449 cells. EGR1 was reported to suppress cell growth by regulating p53 in lung cancer cells and BCL6B was reported involved in p53 signaling in gastric cancer [11, 15–17]. Thus, we focused on the p53 signaling pathway in human HCC. The expression of EGR1, p53, p21, caspase-3, caspase-7, caspase-9, PARP and Bax was increased and the expression of MDM2 and bcl-2 was reduced after restoration of BCL6B expression in human HCC cells. These results suggest that BCL6B activated p53 signaling and induced apoptosis in human HCC cells. As p53 expression was regulated by EGR1 in human lung cancer cells [15, 17]. It is reasonable to suggest that p53 signaling was activated by BCL6B through EGR1 in human HCC. It was reported before that p53 disruption rendered cells strikingly resistant to the effects of the antimetabolite 5-FU in colorectal cancer [25]. We further analyzed the sensitivity of BCL6B re-expressed and unexpressed HCC cells to 5-FU. The results demonstrated that BCL6B sensitized HCC cells to 5-FU. These results indicate that BCL6B sensitizes HCC cell to 5-FU by activating p53 signaling.

In conclusion, BCL6B is frequently methylated in human HCC and the expression of BCL6B was regulated by promoter region hypermethylation. BCL6B suppresses cell proliferation and induces apoptosis in HCC cells. EGR1, a key component of p53 signaling, was up regulated by BCL6B in HCC cells. BCL6B activates p53 signaling and sensitizes HCC cells to 5-FU.

Total RNA was isolated using Trizol reagent (Life Technologies, Gaithersburg, MD) and chloroform, isopropanol precipitation. Agarose gel (1%) electrophoresis and spectrophotometric analysis (A260:280 nm ratio) was used to evaluate RNA quality and quantity. Reverse transcription of RNA (5 μg) was carried out according to the instruction of Superscript III-reverse transcriptase kit (Invitrogen, Carlsbad, CA). Following first strand synthesis, the cDNA was diluted to 100 μl using water. Subsequently, 2.5 μl of the diluted cDNA mixture was used for PCR amplification in a final volume of 25 μl. A total of 35 cycles was amplified. GAPDH was amplified with 25 cycles to ensure cDNA quality and quantity for each RT-PCR. RT-PCR primers of BCL6B are as follow: Sense: 5′- AAGCCGTATAAGTGTGAGACG -3′, antisense: 5′- CCGAGAATGTGGTAGTGCAC -3′. Amplified products were analyzed on 2% agarose gels.

HCC cells and tissue samples were digested with proteinase K. Then genomic DNA was isolated by phenol-chloroform extraction. The extracted DNA was diluted in TE buffer and stored at −20°C. 2 μg of genomic DNA was diluted in 50 μl of water. The bisulfite treatment was carried out for 16 h at 50°C. DNA samples were then purified with the Wizard DNA Clean-Up System (Promega, WI, USA), desulfonated with NaOH, and then precipitated with ethanol and resuspended in 20 μl of water.

Immunohistochemical staining for BCL6B was performed on 4 μm thick serial sections derived from 30 cases available matched cancer and adjacent tissue paraffin blocks using antibody against BCL6B (1:100 dilution, Abcam, Cambridge, Massachusetts, USA) as described previously [38, 39]. The staining intensity and area extent were graded according to the German semi-quantitative scoring system, which has been widely accepted and used in previous studies [40–42]. In brief, staining intensity of the nucleus, cytoplasm, and/or membrane (no staining = 0; weak staining = 1; moderate staining = 2; strong staining = 3); extent of stained cells (0% = 0, 1–24% = 1, 25–49% = 2, 50–74% = 3, 75–100% = 4). The final immunoreactive score (0 to 12) was determined by multiplying intensity scores with the extent of positivity scores of stained cells. The cutoff value is 4.

Cells were plated in 6-well culture plates 24 h before transfection and then were transfected with empty vector pcDNA3.1 or the pcDNA3.1-HA-BCL6B vector. The transfected cells were diluted and reseeded 24 h later. Cells were seeded at 1000 cells and 1, 500 cells per well in six-well culture plates in triplicate for HepG2 and SNU449 cells. Transfected cells were selected in 400 ug/mL G418 (Invitrogen). After 14 days, colonies were fixed with 75% ethanol for 30min and stained with 0.2% crystal violet for visualization and counting. The number of colonies was counted under the microscope.

RNA from BCL6B expressed and unexpressed SNU449 cells were converted to cDNA labeled with fluorescent dye (Cy3). The labeled cDNA were mixed and hybridized to human gene expression array and then washed, scanned, and analyzed. The gene expression array (Agilent Human (4 × 44 k)) was provided by Agilent Technologies. The ratio represents gene expression alterations between BCL6B expressed and unexpressed groups. The expression changed more than 3-fold was further analyzed by the software of Diseases Association Analysis (http://bioinfo.vanderbilt.edu/webgestalt/) and validated by semi-quantitative RT-PCR and western blot.

JGH is a consultant to MDxHealth. The other authors declare no conflict of interest.