Cancer tissue is comprised of cancer cells, non-cancerous cells, and extracellular matrix (ECM), and these components constitute specific microenvironments. The tumor microenvironment is now recognized as a critical participant in tumor progression and drug resistance. Non-cancerous cell components include tumor-associated macrophages (TAMs), [1] immune cells, [2] and cancer-associated fibroblasts (CAFs). [2–4] Among the non-cancerous cell components, CAFs reside near the cancer nests and are the most abundant constituent cells of a tumor. [3] In many previous reports, CAFs have been shown to affect not only tumor cell growth and invasion, but also the host responses, such as angiogenesis and inflammation. [5–8] Therefore biological characteristics of CAFs play an improtant role in tumour progression and could be a prognostic indicator. [9] Recently, Cichon et al. reported that AKT2 phosphorylation in CAFs can induce epithelial cell invasion. [10] Guido et al. showed activation of the TGF-β pathway in CAFs induces their metabolic reprogramming and these metabolic alterations can spread among neighboring fibroblasts and greatly sustain the growth of breast cancer cells. [11] Therefore, CAFs can modify tumor metabolism.

Lung cancer is classified into two main subtypes: small cell lung carcinoma (SCLC) and non-small cell lung carcinoma (NSCLC). SCLC represents approximately 14%–20% of primary lung carcinomas [12–14] and has a more rapid doubling time; it also exhibits the earlier development of widespread metastases. Thus, this disease is highly aggressive, and approximately 60%–70% of patients have disseminated disease at the time of diagnosis. The current treatments for SCLC are radiation therapy, chemotherapy, or a combination of these treatments. However, a complete cure is presently difficult. Therefore, novel strategies are required for the treatment of SCLC.

The mRFP-labeled cancer cells (2 × 105 cells) in RPMI1640 and the Venus-labeled CAFs (2 × 105 cells) in MEM alpha were equally mixed and plated onto a 60-mm dish (Figure 1A). On day 4, the number of mRFP-labeled cancer cells and the number of 7AAD (Beckman Coulter, CA)-positive cancer cells were measured using hemocytometers with an inverted-type fluorescence microscope (BZ-9000; KEYENCE, Japan) (Figure 1B). We defined dead tumor cells as both 7AAD-positive and mRFP-positive cells. On the hand, viable tumor cells were defined as mRFP-positive and 7AAD-negative cells. We calculated the percentage of cancer cells in each experiment using a denominator that represented the average value of the control group.

NCI-H82 (1 × 106 cells) and Venus-labeled CAFs (1 × 106 cells) were injected under the dorsal subcutaneous tissue of SCID mice (7–10 weeks of age, CLEA, Japan). The tumor length, width, and height were measured every week. The tumor volume was calculated as the product of a scaling factor of 0.52 and the tumor length, width, and height. All the experimental SCID mice were handled in accordance with the institutional guidelines established using the Animal Care Committee of the National Cancer Center East Hospital.

During the period from January 2004 to October 2011, a total of 36 consecutive patients with small cell lung cancer underwent surgical resection at our institution (Table 1). The tumors were staged according to the seventh edition of the tumor-node-metastasis classification developed by the International Union Against Cancer. All the surgical specimens were fixed with 10% formalin and were embedded in paraffin. For immunohistochemical staining, the tissue sections were stained overnight at 4°C using mouse anti-human Geminin antibody (Leica Microsystems, Novocastra, Germany) at a final dilution of 1: 200. As for Geminin-positive cells, 6 hot spots in PDPN-positive CAFs-infiltrated areas were selected, and the number of Geminin-positive cancer cells were counted under a light microscope at a x400 magnification (0.0625 mm2/field). Two observers (A.T. and G.I.) who were unaware of the clinical data independently reviewed all the pathological slides. The frequency of Geminin-positive cancer cells in each case was calculated as the average of the results from 6 areas. The status of PDPN expression in the CAFs was determined by reference to the results published in our previous reports. [27, 30] We also examined the frequency of Geminin-positive cancer cells of invasive lung adenocarcinoma with a tumor size of 2–3 cm in diameter (Cases with PDPN-positive CAFs vs Cases with PDPN-negative CAFs, n = 20, each). 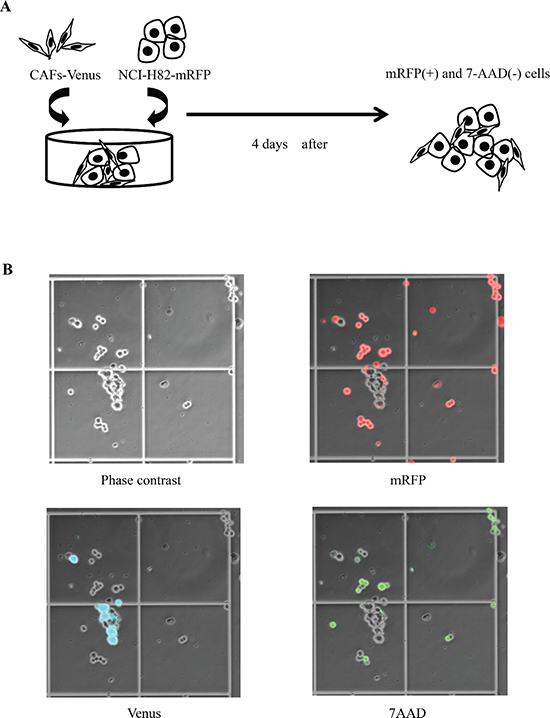 Differences in categorical outcomes were evaluated using the chi-square test. The standard Student t-test was used to determine significant differences compared with the control group. All the P values were 2-sided, and the significance level was set at less than 0.05. Analyses were performed using the statistical software JMP 9 (SAS Institute, NC). This study was conducted as part of a National Cancer Center institutional review board-approved protocol.

Number of SCLC after co-culturing with CAFs-PDPN 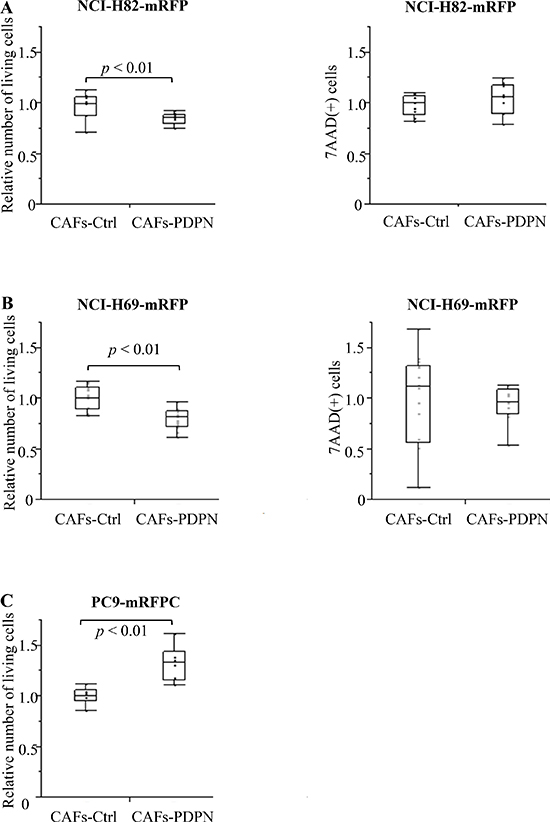 In contrast to the SCLC cell lines, CAFs-PDPN increased the number of cancer cells belonging to the lung adenocarcinoma cell line PC9, compared with the number after co-culturing with CAFs-Ctrl (132.3%, P < 0.01) (Figure 2C).

Number of SCLC after co-culturing with CAFs-shPDPN 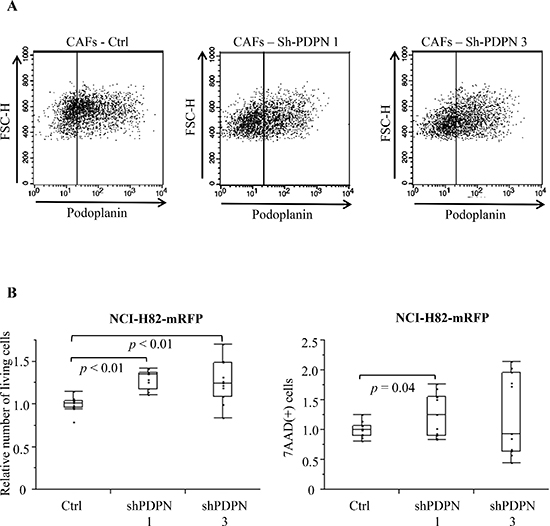 Histological examination of tissue samples from NCIH-82 with CAFs-PDPN or CAFs-Ctrl revealed no difference in morphology, including both the tumor cell and the stromal cell components and the invasiveness into the surrounding tissues (Figure 4C).

Many previous reports have presented the tumor-promoting effects of CAFs on cancer cell growth, survival, and invasion. [2, 3, 7] However, CAFs consist of heterogeneous populations that have distinct phenotypes and functions; [3, 31] thus, the analysis of CAF subpopulations is needed. We have reported that the presence of CAFs expressing PDPN is a predictor of a poor prognosis among patients with lung adenocarcinoma and squamous cell carcinoma of the lung, [22–25] and PDPN itself has been shown to exert tumor-promoting effects using in vitro and in vivo models. Therefore, we considered CAFs expressing PDPN to represent a tumor-promoting component in adenocarcinoma and squamous cell carcinoma. In contrast to our expectations, however, the results obtained using surgically resected specimens of lung SCLC were opposite to the previous findings. [27] Based on these results, the present study was performed to evaluate the biological roles of CAFs expressing PDPN in SCLC for the first time.

The current study showed that CAFs-PDPN suppressed the growth of SCLC using an in vitro co-culture model and surgically resected SCLC specimens. Furthermore, PDPN was found to act as a functional molecule that influences the proliferation potency of SCLC based on experimental results obtained using PDPN-knockdown CAFs. We further examined whether recombinant human PDPN has the same effects on SCLC growth. rPDPN or rGFP as control recombinant protein were added to NCI-H82 cells, and the number of viable NCI-H82 cells was counted. As shown in Supplementary Figure 3A, 100 ng/ml of rPDPN suppressed the number of viable NCI-H82 cancer cells to 82.4%, compared with the number of cells after treatment with 100 ng/ml of rGFP (P < 0.01). On the hand, 100 ng/ml of rPDPN did not influence the number of viable PC9 cancer cells (Supplementary Figure 3B). Moreover the addition of rPDPN increased the CDT1 expression level (G1 associated protein) on day 1 as compared with control group. The addition of rPDPN decreased H3S10p expression level (G2 and M phase associated protein) on day 2 (Supplementary Figure 3C). These findings suggested the possibility that an extracellular region of PDPN might interact with SCLC as a ligand, the downstream signals of which might inhibit growth. The known receptor for PDPN is C-type lectin-like receptor 2 (CLEC-2), which is reportedly expressed by platelets, neutrophils, and dendritic cells. [17, 32–35] We examined the mRNA expression status of CLEC2; however, the SCLC cell lines that we used did not express a significant amount of CLEC2 mRNA (Supplementary Figure 4). Therefore, we think that signal transduction through a ligand (other than CLEC2) for podoplanin may have suppressed the growth of the SCLC cells after it came in direct contact with CAFs-PDPN. Further studies examining ligands for PDPN and the subsequent signaling pathways are needed for the clarification of CAFs-PDPN mediated inhibition of SCLC.

In our previous reports, CAFs-PDPN increased the subcutaneous tumor formation ratio of the lung adenocarcinoma cell line A549 when evaluated using SCID mice. [25, 26] However, the current study revealed that CAFs-PDPN did not influence either the tumor formation ratio or the tumor growth ratio (Figure 5). Moreover, they did not alter the histological growth pattern of SCLC. Considering these results, signaling via PDPN might not affect the factors involved in tumor formation in SCLC. The present in vivo results showing no significant differences in tumor growth can be explained as follows. First, a relatively small number of CAFs had survived and continued to exist in the subcutaneous tumor tissue at 3 to 4 weeks after injection with an SCLC cell line into SCID mice. Actually, we performed immunohistochemical staining of the engrafted tumors using anti-Venus antibody and confirmed that only a small number of Venus-positive fibroblasts were scattered within the engrafted tumors (data not shown). Therefore, the suppressive effect on the growth of SCLC exerted by CAFs-PDPN might be insufficient using this in vivo model. Alternatively, several kinds of stromal cells from the host mouse might have influenced the proliferation potency of SCLC. 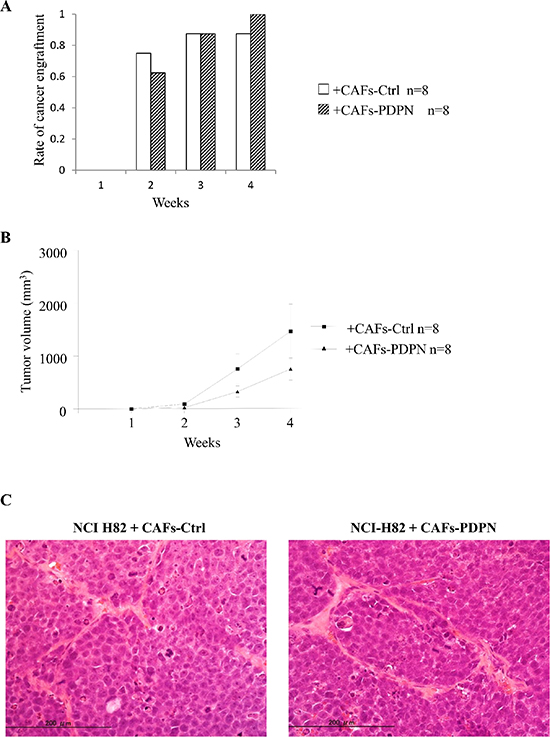 Figure 4: Engraftment rate and tumor volume of NCI-H82 injected with CAFs in mouse subcutaneous tissue. (A) Rate of cancer engraftment at 1, 2, 3, and 4 weeks. (B) Tumor volume of engrafted tumors at 1, 2, 3, and 4 weeks. (C) Histological features of engrafted tumors at 4 weeks after tumor cell injection (H.E. staining) (left, group of CAFs-Ctrl; right, group of CAFs-PDPN). 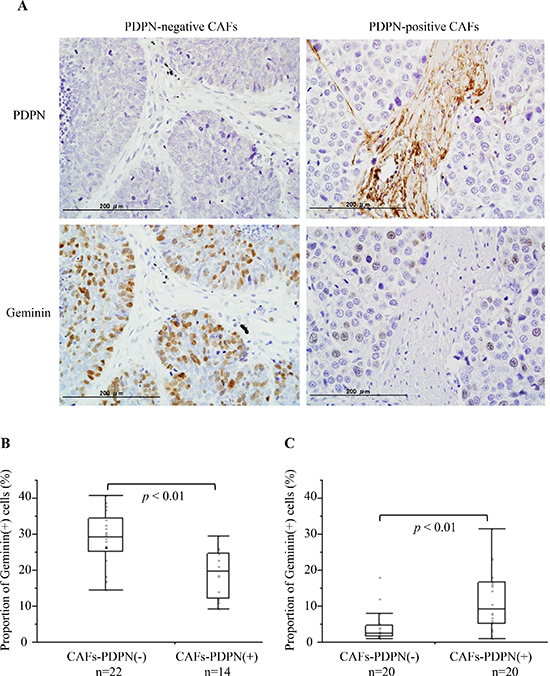 The current result showed that CAFs-Ctrl inhibited the viable cell number of SCLC cells (Supplementary Figure 2), which was associated with higher cell number of 7AAD positive cells. To solve the molecular mechanisms how CAFs induced cell death of SCLC cells would be important for better understanding of cancer microenvironment created by SCLC cells and CAFs.

In conclusion, this study clearly showed that CAFs-expressing PDPN had an inhibitory effect on the proliferation of SCLC. In lung adenocarcinoma and squamous cell carcinoma, we considered CAFs-expressing PDPN to be a stromal cell component with a tumor-promoting phenotype. In SCLC, however, this type of CAFs might have a tumor inhibitory effect. Therefore, the identification of signal transduction via PDPN will become increasingly important for clarification of microenvironments consisting of SCLC cells and CAFs-PDPN. With the further elucidation of molecular mechanisms of how CAFs-PDPN influence the proliferative capacity of SCLC cells, novel method that directly target CAFs-PDPN or inhibit the PDPN-mediated signaling pathway might be one of the candidates for the treatment of SCLC.

This work was supported by National Cancer Center Research and Development Fund (23-A-12 and 23-K-18), the Foundation for the Promotion of Cancer Research, 3rd-Term Comprehensive 10-Year Strategy for Cancer Control, Advanced research for medical products Mining Programme of the National Institute of Biomedical Innovation (NIBIO), and JSPS KAKENHI (24659185).