* These Authors contributed equally to this work

Prostate cancers (PCa) which progress due to gain of androgen receptor splice variants (ARv) or neuroendocrine features act independent of androgen signaling. No therapies currently exist for these lethal PCa phenotypes. Therefore, novel treatment strategies that target non-androgen related pathways that could achieve sustainable regression of disease and are urgently required. Precision medicine has emerged has a promising strategy to identify the most efficient therapy for the patient based on tumor genomics [1-3]. Identifying potential drivers of aggressive PCa and understanding their interactions will lead to novel therapeutic combinations that can be evaluated in the clinic.

Topoisomerase IIα (Top2a) is an enzyme involved in DNA replication, transcription, recombination and chromatin remodeling [4]. Given the important role of Top2a in these processes it is not surprising that Top2a has been implicated in multiple cancers [5]. Specifically, Top2a has been demonstrated to be a prognostic marker for PCa prognosis [6, 7], and is significantly up-regulated in multiple metastatic human PCa datasets [8]. The Top2 poison, etoposide in combination with estramustine was previously included by the National Comprehensive Cancer Network (NCCN) as a standard of care treatment for castrate resistant PCa with or without neuroendocrine features [9, 10]. However, current clinical data, while promising, remains to determine the most beneficial use of etoposide in patients with advanced PCa [11-14].

We identify Top2a as a significantly up-regulated transcript in metastatic tumors from a transplantable PCa mouse model of spontaneous metastasis [15]. Analysis of patient data demonstrated that increased Top2a mRNA in primary tumors selects for patients with aggressive PCa, and identified a positive correlation between Top2a and the histone methyltrasferase, Ezh2. For this reason we tested Top2 and Ezh2 combination inhibition against PCa models in vitro and in vivo, which harbor amplified AR, ARv or neuroendocrine features. 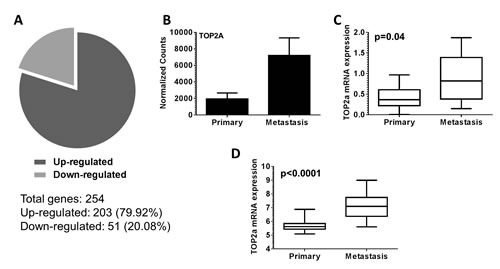 Further in silico analysis of primary patient tumors from the MSKCC data set (n=131) revealed that Top2a mRNA was elevated in 29% of patients (38/131 tumors), and could identify patients with aggressive disease (Figure 2A; p=0.005). 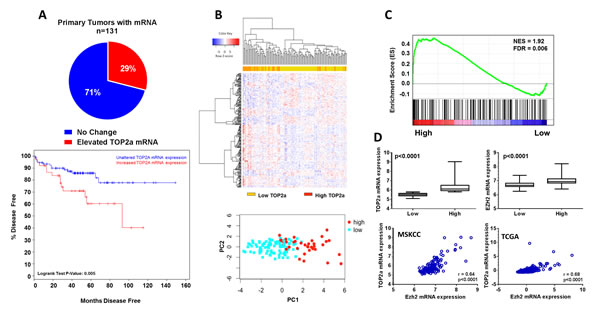 The Top2 poison etoposide and the Ezh2 inhibitor GSK126 [20] were both tested in vitro for their ability to induce cell death in the murine and human PCa cell lines, Myc-CaP [21] and LnCaP [22]. Cell death in response to GSK126 in both cell lines occurred in a dose dependent manner, whereas etoposide induced cell death in both cell lines was time and dose dependent (supplement Figure 3a and b). Combination of non-cytotoxic concentrations of etoposide with GSK126 resulted in a significant increase in cell death in murine PCa cell lines Myc-CaP and TRAMP-C2 [23], and the human PCa cell line LnCaP (p<0.05). Cell cycle analysis revealed that all cell lines displayed a similar response to drug treatment. This response was demonstrated by a strong induction of cellular aneuploidy (>4N DNA content) and greatest loss of S phase within the diploid cell population (supplement Figure 2c and Figure 3B). This response within the cell cycle was primary mediated by etoposide or combination treatment. Further, both GSK126 and combination treatment resulted in loss of Ezh2 methyl-transferase activity as indicated by loss of histone H3 lysine 27 tri-methylation (H3K27me3) (Figure 3C). 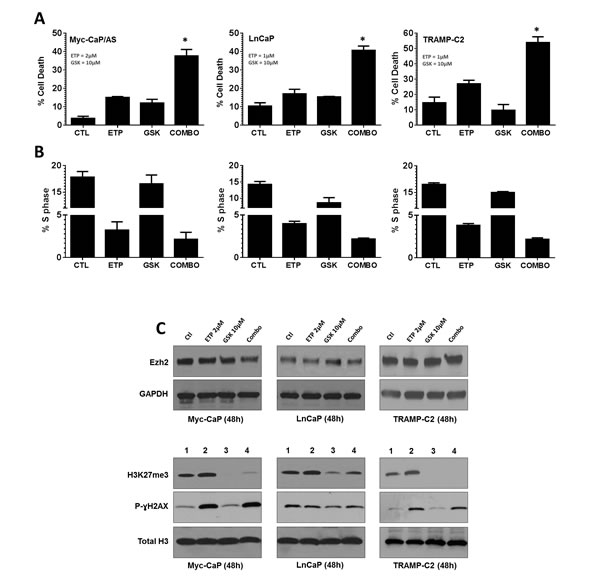 Finally, the anti-tumor activity of etoposide in combination with the Ezh2 inhibitor DZNep [25] was evaluated in vivo. Tumor bearing mice were treated with vehicle (5% DMSO/PBS; 2x week), etoposide (10mg/kg i.p.: day 1-5), DZNep (5mg/kg i.p.: 2x week) or combination. No significant toxicity was observed in all therapy studies as shown by body weight measurement (supplement Figure 4a and 5a). Combination treatment of mice bearing Myc-CaP tumors resulted in significant delay in time to progression (p=0.002) (Figure 4A and supplement Figure 4b). Specifically, tumor bearing animals treated with vehicle had a median time to progression of 12 days. Both etoposide and DZNep did not result in significant antitumor activity as treated mice with either therapy displayed a median time to progression of 14 days. However, combination therapy extended median time to progression to 18 days. Analysis of hematoxylin & eosin (H&E) stained Myc-CaP tumor samples showed a larger accumulation of apoptotic cells within the combination treatment cohort (supplement Figure 4c). Immunohistochemical (IHC) staining for p-ɣH2AX further indicated dominant therapeutic efficacy of etoposide combined with DZNep resulted in significant increase in DNA-DSB (p<0.0001) (Figure 4B). 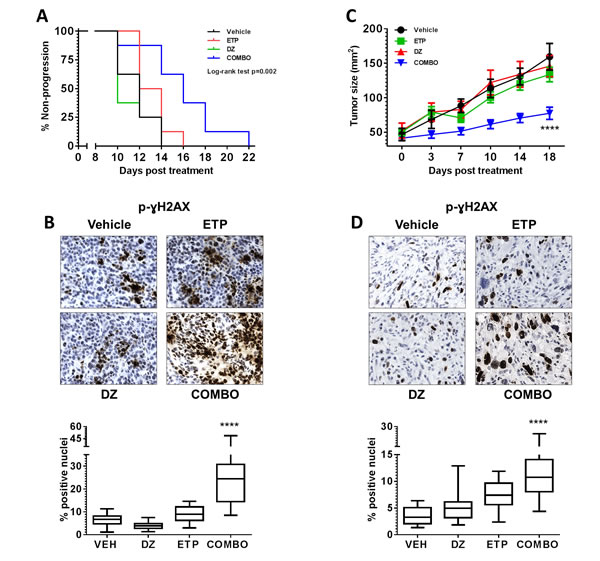 We have recently reported the generation of a syngeneic orthotopic transplant model of spontaneous prostate cancer metastasis [15]. This model was generated by the use of the murine Myc-CaP cell line [21]. Further, it was shown the Myc-CaP cell line expresses ARv. Myc-CaP ARv was demonstrated to be structurally similar with clinically relevant ARv, which function in the absence of ligand [26]. Because of this, we feel that this unique model currently represents an opportunity to discover new targets which can be implemented into pre-clinical therapeutic evaluation.

Surprising to us, was the identification of a novel positive correlation between increased mRNA levels of Top2a and the histone methylatransferase, Ezh2. With this, we pursued the attractive approach of combination targeting of Top2 and Ezh2 inhibition. Top2 inhibitors/poisons such as etoposide have been approved by the US Food and Drug Administration for the treatment of multiple cancer cancers including PCa [4, 9, 11-14, 27].While studies have demonstrated the potential of etoposide treatment for advanced PCa, they have yet to deliver a combination strategy that provides significant clinical benefit without associated toxicities. Also, Ezh2 is demonstrated to be deregulated in multiple cancers, including PCa [28], and has been associated with PCa progression and aggressiveness [29]. Recently, Ezh2 inhibition by compounds such as DZNep and GSK126 has proven to display in vitro and in vivo anti-tumor activity [20, 25, 30].

Combination treatment displayed strong efficacy against our murine and human PCa models both in vitro and in vivo, though combination appeared more potent in our murine PCa models, with regards to cell cycle. We believe the cell cycle responses may be enhanced in Myc-CaP and TRAMP-C2 cells compared to LnCaP cells because of more rapid doubling times of murine cell lines.

Following ribosomal RNA depletion and fragmentation of total RNA (500ng), first strand cDNA is generated using reverse transcription and random primers using the TruSeq Stranded Total RNA Sample Preparation kit (Illumina, Inc.), following manufacturer’s instructions. Second strand cDNA synthesis is followed by end modification and ligation of indexed sequencing adapters. The products are PCR amplified for 15 cycles, purified and validated for size (200-400bp) and quantitated using an Agilent High Sensitivity Bioanalyzer Chip and the Agilent 2100 expert software. The individual cDNA libraries are normalized to 10 nM and combined as equal molar aliquots into pools of 2-6 samples. Each pool is normalized to 10pM, loaded and clustered to individual lanes of a HiSeq Flow Cell using an Illumina cBot (TruSeq PE Cluster Kit v3), followed by 2 x 101 PE sequencing on a HiSeq2000 sequencer according to the manufacturer’s recommended protocol (Illumina Inc.). The sequencing libraries were prepared with the TruSeq Small RNA kit (Illumina Inc), from 1ug total RNA. Following manufacturer’s instructions, the first step involves ligation of 5’ and 3’ RNA adapters to the mature miRNAs 5ʹ-phosphate and 3ʹ-hydroxyl groups, respectively. Following cDNA synthesis, the cDNA is then amplified with 11-13 cycles of PCR using a universal primer and a primer containing one of 48 index sequences. The 48 different indexed tags allow pooling of libraries and multiplex sequencing. Prior to pooling, each individual sample’s amplified cDNA construct is visualized on a DNA-HS Bioanalyzer DNA chip (Agilent Technologies) for mature miRNA and other small RNA products (140-150bp). Successful constructs are purified using a Pippen prep (Sage Inc.), using 125 – 160 bp product size settings with separation on a 3% agarose gel. The purified samples are validated for size, purity and concentration using a DNA-HS Bioanalyzer chip. Validated libraries are pooled equal molar in a final concentration of 10nM in Tris-HCI 10 mM, pH 8.5, before 50 cycle sequencing on a MiSeq (Illumina, Inc.).

All analysis was performed by the Department of Bioinformatics and Statistics at Roswell Park Cancer Institute. Reads were mapped to the latest mouse reference genome (mm10) using Bowtie [34]. From the Bowtie results, reads that matched a single unique location in the genome were identified, allowing up to two mismatches. The number of reads aligning to each gene was calculated. Between-sample normalization was performed using the Trimmed Mean of M-values normalization method [35], which is specifically designed for RNA-seq data. Differentially expressed genes were identified using DESeq [36], a variance-analysis package developed to infer the statically significant difference in RNA-seq data. Multiple testing corrections were corrected. GEO accession number, GSE64771, for RNA seq.

Gene Ontology (GO) David Analysis: GO enrichment analysis was performed with DAVID functional classification tool. The generated DEG file for metastatic genes was uploaded to the web based bioinformatics tool DAVID (http://david.abcc.ncifcrf.gov/tools.jsp) [37]. Cutoff for genes of interest in the DEG file was a p-value of <0.05.

Gene Set Enrichment Analysis: The DEG genes for the metastatic tumors were uploaded into the JAVA based GSEA (http://www.broadinstitute.org/gsea) [38] tool and the oncogenic signatures dataset were selected. Gene lists from our RNA-seq as well as from the publically available clinical dataset by Taylor et al [16] were uploaded and analyzed.

Cells were incubated in the presence of either in single or combination dose of Etoposide and GSK126 for 24 or 48 hours respectively. Viability of cells was measured by trypan blue exclusion assay. Cells were mixed at a 1:1 (v/v) ratio with trypan blue (0.4% in PBS) (Corning Cellgro). Cell death was then determined by counting a total of 100-cells in a haemocytometer using a light microscope.

Cells were seeded into 6-well plates (BD Bioscience), left to adhere, and treated as indicated. Following treatments, adherent and non-adherent cells were collected and washed in 1x PBS, and fixed in 50% ethanol at 4ºC overnight. Cells were stained with propidium iodide solution containing RNase A (Sigma) for 15 minutes at 37ºC. DNA content analysis was performed by using a FACS caliber cytometer.

Whole Cell Lysate Preparation (WCL): Cells were harvested and lysed with RIPA buffer (Sigma Aldrich, USA) + 1X P-STOP + 1X PIC (Roche) for 30 minutes on ice. Eppendorf tubes were vortexed every ten minutes for 10 seconds. After cell lysis tubes were centrifuged at 13,000 rpm for 15 minutes at 4°C. Supernatant of each tube was collected and transferred to a new tube.

Protein concentrations of whole cell lysates (WCL) and histone extractions were measured by the bradford protein assay (Bio-Rad laboratories). Protein lysates (50μg WCL, 5μg Histone Extraction) where separation using 4-15% by SDS-PAGE gels (Bio-Rad). The proteins were transferred from the SDS-PAGE gel onto nitrocellulose membrane (0.2 µm) (Bio-Rad, Hercules, CA) via the semi-dry method (Bio-Rad, Hercules, CA) for 35 minutes at 15V. Membranes were blocked in either 5% skim milk or BSA in 0.1% tween-PBS (tPBS) for 1-hour at RT. Membranes were washed briefly 3x with tPBS prior to primary antibody incubation at 4°C over night. Membranes were then washed 3x10 minutes before the addition of secondary horseradish peroxidase (HRP)-conjugated antibodies (Bio-Rad, Hercules, CA) diluted in tPBS. After incubation at RT for 1-hour with agitation the membranes were washed 3x10 minutes in tPBS. The immunoreactive bands were visualized by enhanced chemiluminescence with ECL detection reagents (GE Healthcare Life Sciences, UK). The blots were exposed to Bio film for 1 second-10 minutes. The films were then developed in a Kodak film developer. To estimate molecular weight of bands a pre-stained protein ladder was used (Bio-Rad, Hercules, CA).

9. Pienta KJ and Lehr JE. Inhibition of prostate cancer growth by estramustine and etoposide: evidence for interaction at the nuclear matrix. The Journal of urology. 1993; 149(6):1622-1625.