Breast cancer in younger patients often presents with adverse histopathological features, including increased frequency of estrogen receptor negative and lymph node positive disease status. Chromosomal instability (CIN) is increasingly recognised as an important prognostic variable in solid tumours. In a breast cancer meta-analysis of 2423 patients we examine the relationship between clinicopathological parameters and two distinct chromosomal instability gene expression signatures in order to address whether younger age at diagnosis is associated with increased tumour genome instability. We find that CIN, assessed by the two independently derived CIN expression signatures, is significantly associated with increased tumour size, ER negative or HER2 positive disease, higher tumour grade and younger age at diagnosis in ER negative breast cancer. These data support the hypothesis that chromosomal instability may be a defining feature of breast cancer biology and clinical outcome.

Chromosomal instability has been widely documented to be associated with poorer prognosis in solid tumours [5] and CIN induced by MAD2 expression promotes rapid tumour relapse following withdrawal of an oncogenic stimulus in animal models [6]. However pre-clinical models have in some cases demonstrated a deleterious impact upon cancer cell survival associated with excessive chromosomal instability initiated by spindle assembly checkpoint inactivation [7] and we and others have shown that aneuploidy has a negative impact upon cell proliferation [8]. Indeed, animal models have also demonstrated that aneuploidy may confer a tumour suppressor effect in cancer prone mice[9]. Cahill and colleagues have suggested that whilst genetic instability may be advantageous under tumour-stromal selection pressures, a threshold may exist beyond which excessive instability becomes deleterious for cancer survival[10].

We reasoned that the association of CIN with poorer prognosis may mask more subtle associations and that extreme CIN predicts improved outcome in contrast to intermediate CIN that might be associated with poorer prognosis. We have previously demonstrated that there may be a non-monotonic relationship between CIN and clinical outcome in a retrospective analysis of breast cancer outcome. We have used a surrogate of CIN status, assessed by CIN70 expression signature, which we have shown acts as a robust surrogate of structural chromosomal complexity measured by CGH and numerical CIN assessed by DNA image cytometry[11]. In this study, we separated patients into quartiles of CIN70 expression and identified that patients with ER negative breast cancer with CIN extreme (4th quartile of CIN70 expression) appear to have improved outcome relative to patients with tumours in the intermediate 3rd quartile which were associated with the worst outcome. In summary, these data confirm the association of CIN with poorer outcome, but also suggest that extreme CIN, exceeding a certain threshold, is associated with improved prognosis.

Here we assess the relationship between CIN70 quartile, which we have previously demonstrated correlates with both numerical chromosomal instability and structural chromosomal complexity, and breast cancer histopathological parameters and age at diagnosis. Additionally, we determine the relationship of histopathological parameters with a breast cancer genomic instability signature derived by Habermann et al.[12]. We find evidence for a significant association of both chromosomal instability signatures with high risk histopathological features and importantly with younger age at diagnosis in ER negative patients in a meta-analysis of 2423 patients. These data are concordant with recent suggestions that breast cancer in younger women represents a distinct clinical entity with higher risk molecular features[4].

Comparison of CIN70 quartiles with the 12 gene genome instability signature 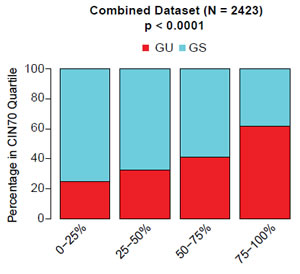 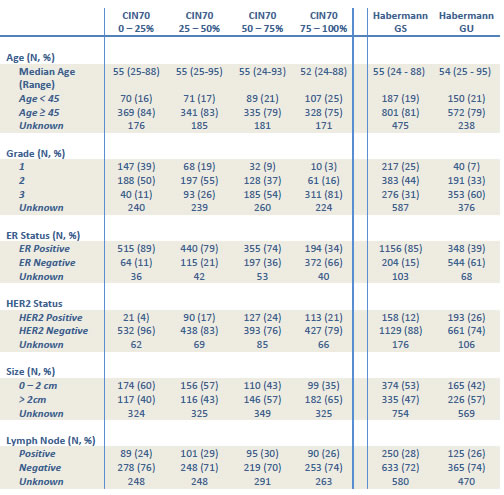 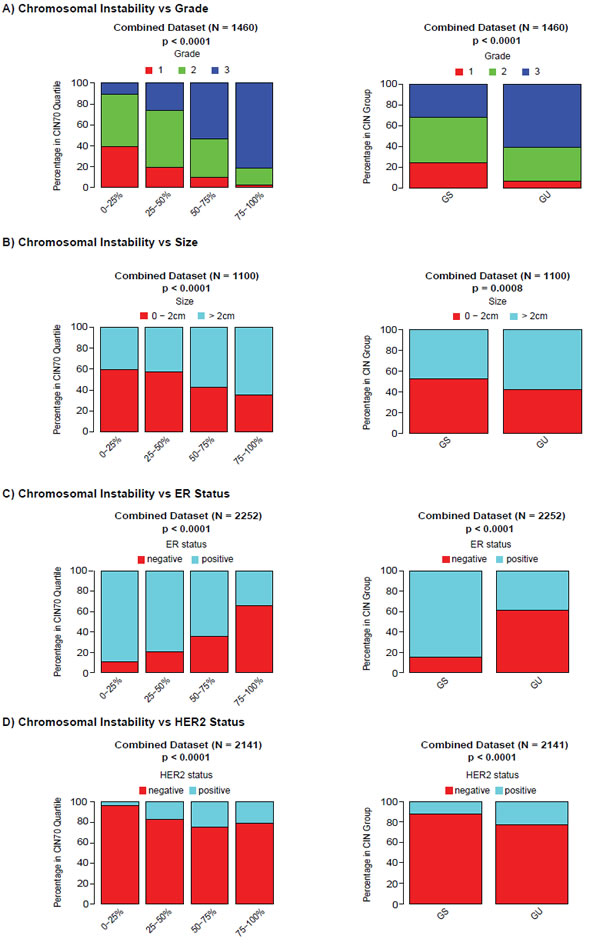 Assessment of CIN status with age of breast cancer diagnosis 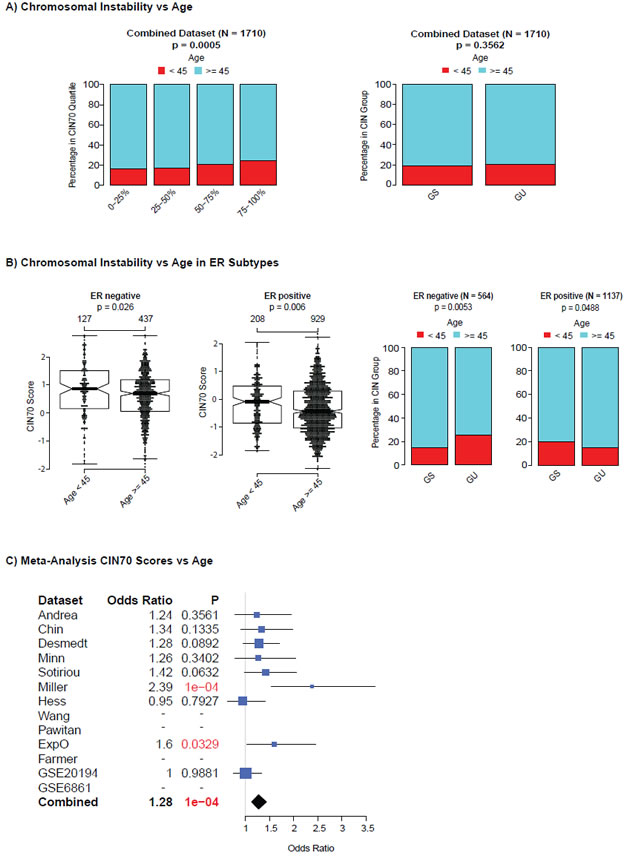 These data are somewhat surprising given the potential for aneuploidy and genome instability to be generated in aging somatic cells [14-16]. Several lines of evidence support the propensity for somatic cells to generate aneuploidy and mitotic errors with age. Specific changes in gene expression associated with the kinetochore, centromere, microtubule and spindle assembly apparatus have been associated with age-dependent aneuploidy [14, 15]. In addition, continued telomeric attrition and senescence failure may generate mitotically unstable chromosomes through breakage-fusion-bridge cycles [17, 18]. Therefore, from these data, it might be predicted that aneuploidy may be enriched in tumours from older patients. In contrast, we find that total functional aneuploidy, measured by the CIN70 expression signature[13], appears to be enriched in tumours from younger patients with ER negative breast cancer. These data suggest the need to identify an underlying mechanistic basis for this association of younger age at diagnosis with CIN in ER negative breast cancer.

Gene expression changes have previously been identified that characterise breast tumours in younger patients. Anders and colleagues investigated the age-specific differences in prognosis, clinicopathologic variables and gene expression patterns between younger (45 years) and older (65 years) women with breast cancer and found a distinct set of genes associated with the younger cohort – suggesting there might exist age-related differences at the molecular level [19]. However, it is difficult to draw conclusions as to whether these differences represent varying prevalence of distinct subtypes and tumour grade between distinct age-cohorts or whether they reflect other age related differences [20]. More recent work by Anders has suggested that the gene expression patterns uniting the younger cohort may relate to an enrichment of basal-like tumours in this patient group [21]. Our data, using two independently derived expression measures of CIN, suggest that a molecular feature of tumours from younger patients with ER negative breast cancers may reflect structural or numerical CIN. Consistent with an association of CIN with higher risk features, we show here in our meta-analysis that ER negative tumours are enriched for CIN, supporting our previous analysis in a smaller cohort [11]. These data are in agreement with data from Habermann and colleagues suggesting that genome instability is a unifying feature of higher risk tumours [12] and tumours from younger patients display higher expression of surrogate of measurements of tumour growth and genomic instability [22].

These data should be interpreted with caution and require validation by more direct measurements of CIN, such as centromeric FISH, rather than our surrogate measure using the CIN70 expression signature. Notably, we observe concordance for the association of younger age with CIN using both CIN expression measures in ER negative but not ER positive breast cancers. The reasons for this discordance remain unclear, however, others have also failed to demonstrate increased structural chromosomal complexity in ER positive tumours from younger patients by CGH [23].

For datasets measured on Affymetrix HG-U133A, HT-HG-U133A or HG-U133 Plus 2.0 platforms, we estimated ER and HER2 status by k-medoids clustering of the affymetrix probe sets corresponding to the ESR1 (205225_at) and ERBB2 (216836_s_at) genes according to published methods [35]. We estimated CIN70 scores by computing the mean expression of the probe sets matching the 70 genes comprising the CIN70 signature as described [11, 13]. For microarray platforms where not all 70 genes were present on the array platform, we computed the mean over all CIN70 genes present on the particular platform. For all analyses, CIN70 scores were first estimated for each dataset separately and normalized to a standard normal distribution. The normalized CIN70 scores of all datasets were then combined and CIN70 score quartiles were defined based on the combined CIN70 scores. Additionally, all patients were grouped into genomically unstable (GU) and genomically stable (GS) patients based on a 12 gene genomic instability signature derived by Habermann et al[12]. The expression of all genes matching the 12 gene signature was utilised to cluster the data into GS and GU patients by k-medoids clustering. For further analysis, we used the average expression values of genes matching several probe sets. The cluster membership was derived by comparing the expression direction of the genes in the signature with published results [12]. The To assess the association of the GS and GU groups or CIN70 scores with age, grade, size, lymph node, HER2 and ER status all datasets, where the particular information was available, were combined.

All breast cancer patients where information about age was available were grouped into young (age < 45) and old (age ≥ 45). Tumours were classified into small (0 – 2 cm) and large (> 2 cm). To assess the difference in CIN70 scores between young and old patients in a meta-nalaysis, a logistic regression model was used to obtain odds ratios for each dataset separately. Additionally, we tested for differences between young and old patients in ER negative and ER positive separately with two-sided t-tests. Cochrane-Armitage trend tests were performed to test for an association of increasing CIN70 quartiles with age, pathological complete response, size, lymph node, HER2 and ER status and to test for a trend of grade 3 versus grade 1 and 2 tumours [36]. We used Fishers exact tests for the comparison of proportions in 2x2 contingency tables. All data analysis and statistics was performed in the R statistical environment version 2.11.1.

5. Walther A, Houlston R, Tomlinson I. Association between chromosomal instability and prognosis in colorectal cancer: a meta-analysis. Gut. 2008; 57:941-950.