βIII-Tubulin: A novel mediator of chemoresistance and metastases in pancreatic cancer

Pancreatic ductal adenocarcinoma (PDA) is a devastating disease that ranks as the fourth leading cause of cancer-related death in Western societies, with a 5-year survival rate of 6-7% [1-5]. This poor prognosis is due to PDA’s propensity to acquire resistance to chemotherapeutic agents and metastasize [8, 9]. The result is that our current chemotherapeutic treatments only extend patient survival by ∼8–16 weeks [10]. These statistics highlight the imperative to identify effective therapeutic targets for this devastating disease.

The tubulin/microtubule network is recognized as a key player in cancer chemoresistance [11]. Microtubules are tube-like assemblies of α-and β-tubulin heterodimers, that form part of the cell cytoskeleton and play critical roles in regulating mitosis and intracellular transport [11]. β-tubulin has seven different isotypes (βI, βII, βIII, βIVa, βIVb, βV, βVI) that exhibit distinct tissue expression profiles [11]. Notably, all of the β-tubulin isotypes share a high degree of homology and are distinguished by their unique carboxy terminal tail which is subject to post-translational modifications [11]. The importance of microtubules as therapeutic targets for cancer is highlighted by the clinical use of tubulin binding agents (TBAs) which target β-tubulin. At high concentrations these agents induce mitotic arrest and cause cell death [12]. However, therapeutic applications of TBAs are often marred by resistance, which is often correlated to differential expression of specific β-tubulin isotypes [11]. Clinical studies have reported high expression of βIII-tubulin in several cancers including lung, breast, prostate, gastric and melanoma [13-18]. Under non-pathological conditions βIII-tubulin expression is primarily restricted to neurons, and sertoli cells in the testis, and at low levels in other tissues [19, 20]. Interestingly, its upregulation in cancer cells has been correlated to decreased progression-free or overall survival and resistance to chemotherapeutic agents [21]. Functional studies have confirmed the importance of βIII-tubulin in regulating sensitivity to chemotherapeutic agents in non-small cell lung cancer (NSCLC), ovarian cancer and prostate cancer cells [22-25].

Up-regulation of βIII-tubulin has been observed in advanced PDA patient tissue specimens and cell lines [26]. Interestingly, aberrant βIII-tubulin expression in PDA cells was associated with activation of kRAS (oncogene commonly associated with PDA) and appeared to be progressively upregulated in pancreatic intraepithelial neoplasias (PanIN) 1 to 3, the precursor lesions of PDA [26]. Despite this strong correlation, no functional role for βIII-tubulin has been established in pancreatic cancer. Using a gene-silencing approach we silenced βIII-tubulin expression in pancreatic cancer cells and determined its role in regulating chemosensitivity, cell growth, tumorigenesis and metastases. We report for the first time that silencing βIII-tubulin in pancreatic cancer cells in vitro 1) decreases clonogenicity; 2) decreases anchorage-dependent and independent proliferation; 3) increases apoptosis and anoikis; and 4) increases sensitivity to chemotherapy drugs including gemcitabine and the TBAs paclitaxel and vincristine. Notably, we demonstrate the importance of βIII-tubulin in regulating tumor growth and metastases in a clinically-relevant orthotopic pancreatic cancer mouse model. 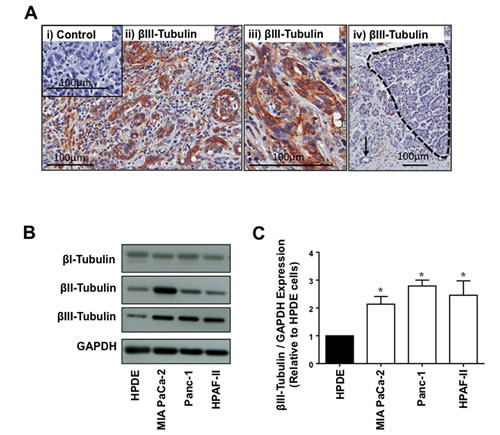 Potent and specific knockdown of βIII-tubulin in pancreatic cancer cells 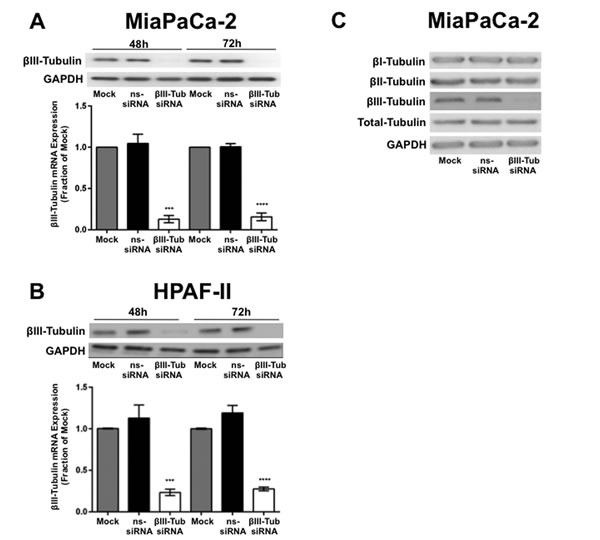 Next, we examined whether the increased sensitivity of pancreatic cancer cells to TBAs (paclitaxel and vincristine) following silencing of βIII-tubulin was due to increased disruption of mitosis. MiaPaCa-2 and HPAF-II cells were transfected with βIII-tubulin siRNA and then treated with increasing concentrations of paclitaxel (microtubule-stabilizing agent) or vincristine (microtubule-destabilizing agent) and their cell cycle measured. We observed increased accumulation of both control (ns-siRNA) and βIII-tubulin-siRNA treated cells in G2/M phase, along with a corresponding decrease in G0/G1 phase with increasing concentrations of paclitaxel (Figure 4C) and vincristine (Figure 4D). However, βIII-tubulin knockdown did not markedly affect cell cycle distribution, relative to controls (ns-siRNA; Figure 4C-D), suggesting that the decreased clonogenic potential of βIII-tubulin knockdown cells in the absence or presence of TBAs was not due to enhanced disruption of the cell cycle. 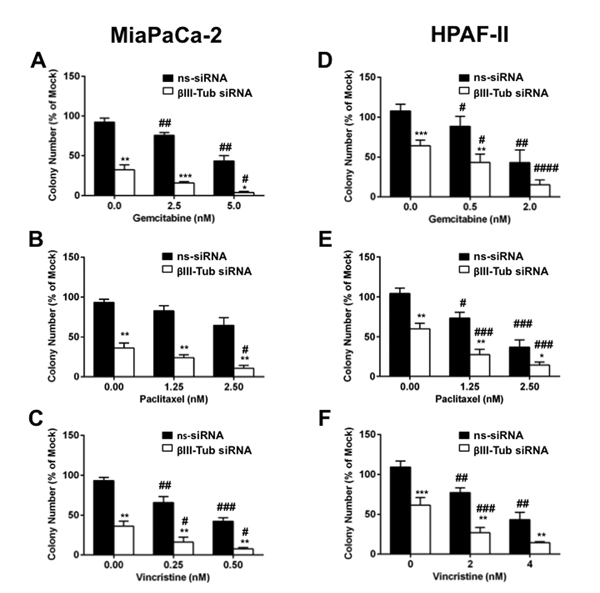 FIGURE 3: The effect of βIII-tubulin silencing on pancreatic cancer cell clonogenic capacity. A-C) Bars represent the number of MiaPaCa-2 colonies (mean±s.e.m. as a % of mock) that formed from low density seeding following transfection with mock, control siRNA (ns-siRNA), or βIII-tubulin siRNA (βIII-Tub siRNA) and 72h culture in titrations of Gemcitabine (A), Paclitaxel (B) or Vincristine (C). D-F) as per A-C, except experiments were carried out with HPAF-II cells. Asterisks indicate significance relative to ns-siRNA of the same drug dose (*** p≤0.001, **** p≤0.0001; n=5). Hashes indicate significance relative to 0 nM drug concentration of the same siRNA (# p≤0.05, ## p≤0.01, #### p≤0.0001; n=5). 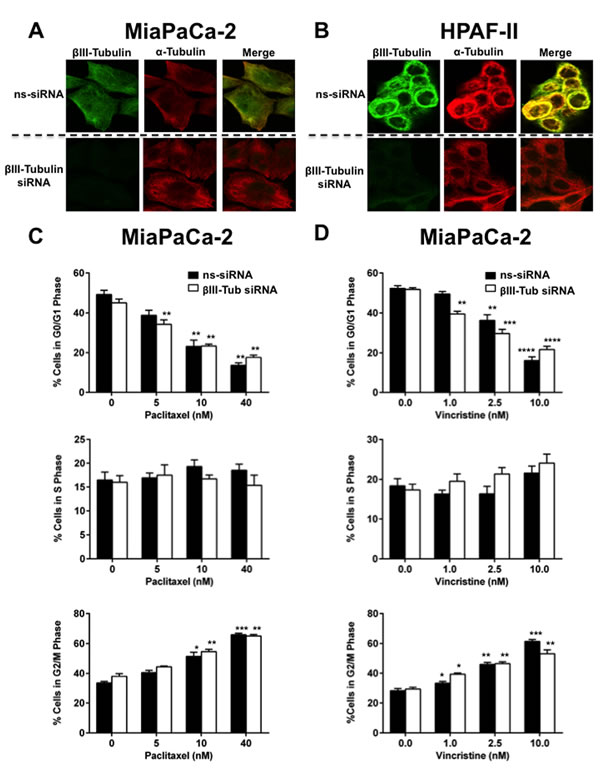 FIGURE 4: The effect of βIII-tubulin silencing on pancreatic cancer cell morphology and cell cycle. A) Confocal microscopy for α-tubulin and βIII-tubulin in MiaPaCa-2 cells transfected with control siRNA (ns-siRNA) (top panels) or βIII-tubulin siRNA (βIII-Tub siRNA; bottom panels). Overlaid fluorescence images are shown in the far right panel of each row. B) as per A, except HPAF-II cells were used. C-D) Cell cycle distribution was analyzed by propidium iodide staining and flow cytometry. Bars represent % of MiaPaCa-2 cells in G0/G1-phase, S-phase, or G2/M-phase (mean±s.e.m.). 72h post-transfection with either ns-siRNA or βIII-Tub siRNA cells were incubated for eight hours with Paclitaxel (C) or Vincristine (D). Asterisks indicate significance relative to the no drug control of the same siRNA (* p≤0.05, *** p≤0.001, **** p≤0.0001; n=5).

To investigate whether apoptosis was responsible for the reduction in the number of pancreatic cancer cell colonies, MiaPaCa-2 cells were transfected with βIII-tubulin or control siRNA (ns-siRNA) and then treated with or without chemotherapy drugs. βIII-tubulin suppression in pancreatic cancer cells induced a marked increase in apoptosis (Annexin V and 7AAD) in the absence of chemotherapy drugs (Figure 5A-F). This was echoed by a significant increase in caspase 3/7 activity, in βIII-tubulin knockdown cells (Figure 5D-F). Furthermore, the increase in apoptosis was sustained in the presence of chemotherapy drugs (Figure 5D-F). These data suggest that the decreased clonogenic potential in pancreatic cancer cells is mediated via increased apoptosis. To the best of our knowledge this is the first report to demonstrate a role for βIII-tubulin in regulating cell survival in tumor cells in the absence of chemical and /or environmental stress. 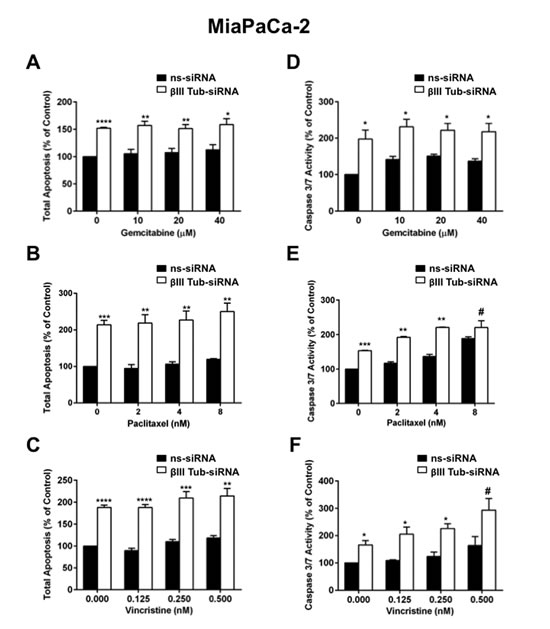 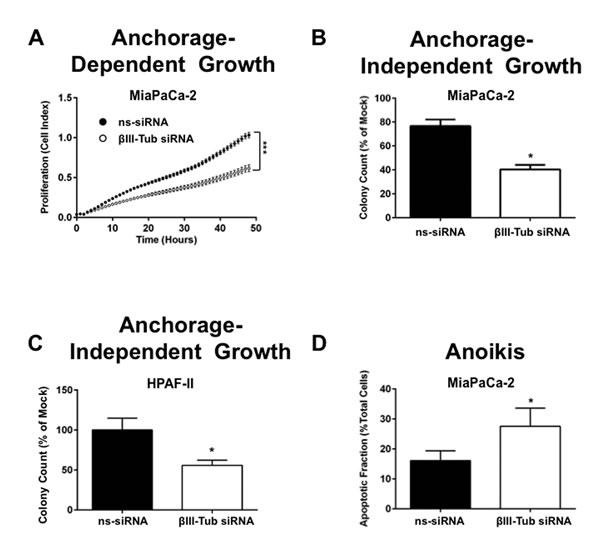 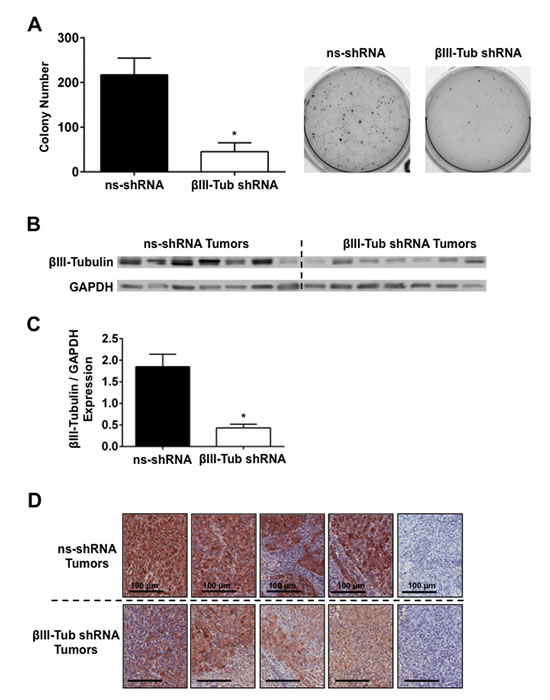 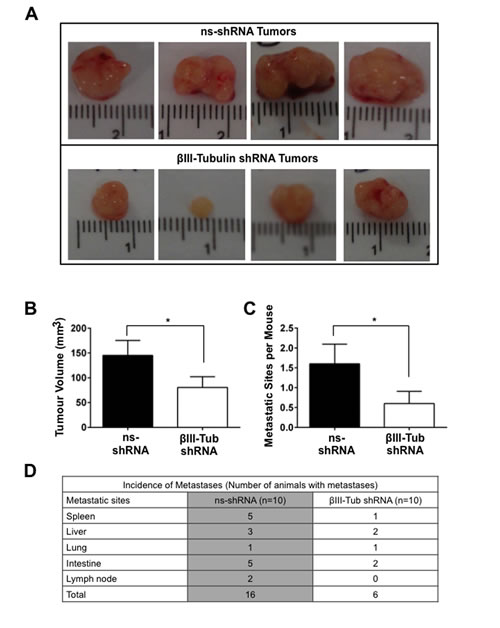 In health, βIII-tubulin expression is restricted to neuronal tissue and testicular sertoli cells [19, 20]. However, clinical studies report high levels of βIII-tubulin in different tumors including breast, lung, ovarian, gastric and melanoma [13-18]. Recently, high βIII-tubulin expression was reported in prostate cancer, and was linked to high Gleason grade, advanced tumor stage and local metastases [31]. In this study we demonstrated that βIII-tubulin was expressed at high levels in pancreatic tumor cells, while absent in the acinar and normal pancreatic ducts in tissue specimens collected after surgical resection. We also showed increased expression of βIII-tubulin in pancreatic cancer cell lines compared to primary cultures of HPDE cells. Our results are in accordance with a study by Lee et al. [26], which reported βIII-tubulin expression in advanced PDA tissue samples. However, prior to the present study, there have been no studies to elucidate its functional role.

A role for β-tubulin isotypes in regulating chemosensitivity in tumor cells has been described. Gan et al. [22] showed that silencing βIII-tubulin in NSCLC cells reduced their clonogenic capacity in the presence of chemotherapy. This finding was extended to an in vivo setting by McCarroll et al. [24], which reported that stable suppression of βIII-tubulin in NSCLC cells increased survival in mice when treated with cisplatin. More recently, βIII-tubulin was shown to be involved in regulating docetaxel sensitivity in castrate-resistant prostate cancer cells [31]. Interestingly, Gan et al. [28] reported that suppression of βII- or βIVb-tubulin in NSCLC cells increased sensitivity to only one class of chemotherapy drugs known as Vinca Alkaloids. These studies reinforce the concept that individual β-tubulin isotypes may have specific functional roles in tumor cells, with βIII-tubulin appearing to be important in regulating sensitivity to broad classes of chemotherapy drugs. However, despite the increasing number of studies that highlight the importance of βIII-tubulin in tumor cells, its mode of action has yet to be fully determined.

Collectively, this work has identified a novel role for βIII-tubulin in promoting pancreatic cancer growth and survival. Identification of βIII-tubulin as a therapeutic target has the potential to refine personalized medicine for patients with this malignancy. The relatively limited impact of chemotherapy in this malignancy does require identification of agents with alternative anti-tumor activity. Drugs targeting this system would be predicted to have limited effects on normal tissues. Therefore they lend themselves to prolonged use, such as in the adjuvant setting. In particular the anti-metastatic effect shown in vivo encourages exploration of their use in the adjuvant setting and in conjunction with or sequential to chemotherapy.

24h post-transfection with siRNA, cells were seeded onto glass chamber slides and allowed to adhere for 48h. The slides were fixed in 4% paraformaldehyde and immunofluorescence staining was performed as described [22, 43, 44]. Primary and secondary antibodies used were, anti-βIII-tubulin (1:500), anti-α-tubulin (1:500), anti-goat AlexaFluor-488 or AlexaFluor-555 (1:1000). Images were captured using a Leica confocal microscope.

48h after siRNA transfection, pancreatic cancer cells were treated with culture medium containing cytotoxic drugs for 24h. Cell death was measured using the Annexin V-PE-7-AAD-FITC reagent (Millipore) as described [41, 45, 46]. Caspase 3/7 activity was analyzed using a Caspase-Glo luminescent based assay as previously described [24, 41]. Briefly, pancreatic cancer cells were treated with siRNA as above and seeded into a 96-well white opaque plate and a corresponding clear 96-well plate. 24h post-cytotoxic drug treatment, cells in the white opaque plate were incubated with caspase 3/7 reagent for 2h at room temperature and luminescence measured with a luminometer (PerkinElmer Victor 3). Cells in the clear 96-well plate were incubated with CCK-8 reagent for 1h at room temperature and cell viability was determined by measuring absorbance at 450nm. Caspase 3/7 activity was then normalized to these values.

MiaPaCa-2 and HPAF-II cells were seeded in 0.33% agar in X2 growth medium on a 5% agar layer in 6 well plates, 48h post-siRNA transfection. Colonies were allowed to grow over 3 weeks, after which plates were stained with MTT and visualized on an ImageQuant LAS4000 luminometer (GE Healthcare). Colonies were counted as described [24].

1 ml of 12 mg/ml poly 2-hyroxyethyl methacrylate (Poly-HEMA) in 95% ethanol was added into each well of a 6-well culture plate and left to dry overnight. 24h after siRNA transfection MiaPaCa-2 cells were seeded into the Poly-HEMA-coated wells. Cell death was measured 48h later by annexin V-7AAD staining.

6-8 week old BALB/c nude mice were used. All animal experiments were approved by the Animal Ethics committee, UNSW (ACEC 12/7B). MiaPaCa-2 cells (1X106) were implanted into the tail of the pancreas of mice as described [41, 46]. After 8 weeks, mice were sacrificed and pancreatic tumors, spleen, liver, kidneys, Intestines, heart and lungs and any enlarged lymph nodes/other organs with signs of metastases were collected. Primary tumor size was measured using microcallipers as described [24, 43]. Metastases were confirmed by macroscopic observation, post-harvest individual organ ex-vivo bioluminescence on the Xenogen IVIS Lumina, as described [47].

No potential conflicts of interest to disclose.