Therefore, on the basis of these results, the analysis of circulating HMGA2 specific mRNA might be considered a very promising tool for the early diagnosis of EOC.

Ovarian cancer has the highest mortality rate of all gynecologic neoplasms and is the fifth leading cause of female cancer death in western countries [1]. The high mortality rate of Epithelial Ovarian Cancer (EOC) is associated with a late diagnosis because over 70% of women have advanced stage of disease at first diagnosis [2]. Moreover, even after optimal debulking surgery and response to systemic therapy, the risk of recurrence is high and long-term survival remains poor [3].

Therefore, the rapid progression of ovarian cancer and the high mortality rate associated with advanced-stage disease underlines the need of identifying biomarkers that could allow to diagnose the disease in preclinical or presymptomatic phases.

Several studies aimed to detect molecular markers demonstrated that ovarian tumorigenesis is a sophisticated, multifactorial process that involves abnormalities in many gene families including HMGA2 [4–6].

HMGA2 is a member of architectural chromatin High Mobility Group A (HMGA) protein family. These proteins bind the minor groove of AT-rich DNA sequences through three short basic repeats, called ‘AT-hooks’, and are able to interact with several proteins including various transcription factors. Through these mechanism the HMGA proteins regulate the expression of several genes involved in a wide range of biological processes, such as cell growth, differentiation, apoptosis, and tumorigenesis [7–9]. HMGA2 overexpression has been detected in several human malignancies, in particular pancreatic [10], lung [11], thyroid [12], and ovarian cancer [13, 14] representing a very useful biomarker of malignancy. In particular, we have previously shown that HMGA2 overexpression positively correlated with the body mass index suggesting that the combined evaluation of HMGA2 expression and obesity can be considered a marker of poor prognosis in patients affected by ovarian carcinoma [15].

Previous studies have identified free circulating HMGA2 mRNA in the plasma/serum of patients affected by breast cancer [16, 17] and leukaemia [18]. Therefore, based on our previous findings that indicated HMGA2 as a promising biomarker for ovarian cancer, the aim of this study has been to investigate whether cell free HMGA2 mRNA could be detected in the peripheral blood of patients with ovarian cancer.

Here, we report that HMGA2 specific mRNA was found in 85.1% of the plasma from ovarian cancer patients, but not in the healthy donors, and its detection correlates with the expression of HMGA2 protein in the ovarian carcinoma sections of the same patients.

Therefore, these results allow us to propose the detection of circulating HMGA2 mRNA as a valid non-invasive tool for the early diagnosis of ovarian cancer.

We first analysed the expression of the GAPDH housekeeping gene by RT-PCR in the plasma of the ovarian cancer patients. As shown in Figures 1–2, GAPDH-specific 109 bp amplicons was detected. Then, we evaluated HMGA2 mRNA presence in the plasma of 47 patients and 23 healthy donors. The clinical features of the recruited patients are summarized in Table 1.

First, RT-PCR was performed using a primer pair that amplified a 77 bp-fragment spanning parts of the first and second exons of HMGA2. Representative results of this analysis in EOC patients and healthy donors are shown in the Figures 1A and 1B, respectively. A faint, but specific band, corresponding to the 77 bp HMGA2 fragment was detected in the plasma of 40 out of 47 patients but in none of the healthy controls. 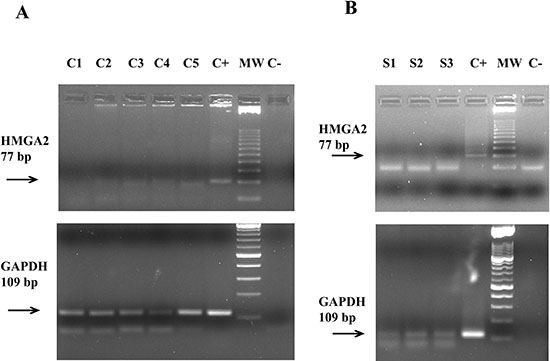 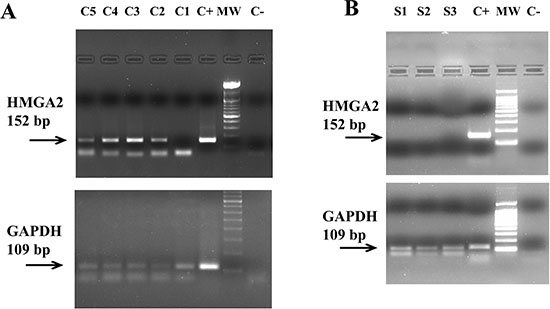 Given that the high RNA fragmentation determines, as a consequence, that different regions of the same transcript might be represented differentially, we investigated another region of same gene. In particular, we designed a primer pair to amplify a 152 bp fragment corresponding to a region of the fourth HMGA2 exon. Representative results are shown in Figure 2A, for cancer samples, and in Figure 2B, for healthy samples. The results obtained with both primer pairs are perfectly overlapping and they are summarized in Table 2. Overall, 40 out of 47 (85.1%) of patients with EOC resulted to be positive for HMGA2 mRNA expression in peripheral blood.

Subsequently, we analysed the expression of HMGA2 protein in paraffin carcinoma sections from 44 patients out of 47 with EOC, enrolled for HMGA2 mRNA detection in the plasma, by immunohistochemistry using antibodies raised versus the N-terminal portion of the HMGA2 protein. Three samples could not be evaluated for technical reasons. 91% of the EOC tissues were strongly immunoreactive for HMGA2 (Table 3), whereas no HMGA2 protein was detected in the normal ovarian tissue surrounding the tumor (Figure 3) and in the Fallopian tube tissue with normal epithelium that was used as negative control. As shown in Table 4, all cases found positive for HMGA2 mRNA in the plasma showed HMGA2 expression at the tumor level. Only 3 out of 7 cases in which we could not detect HMGA2 mRNA in the plasma were positive for HMGA2 expression at the tumor level.

Therefore, these results support the potential use of HMGA2 mRNA detection in the plasma as a promising diagnostic biomarker for EOC.

The aim of our study has been to evaluate the expression of circulating HMGA2 mRNA in the plasma of patients affected by EOC in order to have a new tool for the early diagnosis of ovarian carcinoma. Indeed, it is known that HMGA2 is abundantly expressed in ovarian carcinomas [5] but not in normal ovary tissue. Moreover, even though HMGA2 is highly expressed during embryogenesis [20, 21], it is not expressed in adult tissues [22], whereas its expression is abundant in several human malignant neoplasias [23, 24]. Therefore, the detection of HMGA2 specific mRNA in peripheral blood may indicate the presence of cancer cells.

First, we have developed an extraction protocol in the attempt to obtain a good yield using very small amounts of plasma, since low RNA quantity, high molecular fragmentation and degradation are a major hurdle in the analysis of extracellular RNA and the extraction of nucleic acids from plasma requires copious amounts of starting plasma. Subsequently, we investigated HMGA2 mRNA expression through RT-PCR. We designed two pairs of primers mapping into distinct regions of the HMGA2 gene, because of high RNA fragmentation. One pair of primers amplifies a region between the first and second exon common to both known variants of HMGA2, the other pair amplifies a fragment of the fourth exon of the variant 2 of HMGA2 lacking the 3’UTR.

Despite RNA fragmentation, the results obtained by analysing the expression of the fourth exon of HMGA2 variant 2 were perfectly consistent with those obtained by amplifying the fragment common to both variants of the gene and showed the detection of HMGA2 mRNA in the plasma of the vast majority (85.1%) of patients with EOC, but not in the plasma of the healthy donors.

Therefore, the detection of circulating HMGA2 specific mRNA might be an excellent tool for the diagnosis and the monitoring of patients affected by EOC. Indeed, this method is a non-invasive, because it requires only a peripheral blood sample, cost effective, very simple and can also be performed long after a collection, then, allowing large-scale retrospective studies and, therefore, could make possible to screen populations at risk for asymptomatic diseases such as EOC.

Table 4: Correlations between the expression of HMGA2 mRNA in peripheral blood and the protein in ovarian cancer tissues

We collected peripheral blood samples before resection from a cohort of 47 patients with EOC (see Table 1), and from 23 healthy donors. Patients were enrolled into the study between May 2008 until December 2011. Informed consent for the scientific use of biological material was obtained from all patients. All patients were clinically staged according to FIGO (International Federation of Gynecology and Obstetrics) criteria. Patient diagnosis was made according to the WHO 2003 (World Health Organization) classification [19].

After collection EDTA blood samples (5 ml) were immediately placed on ice. Blood samples were centrifuged twice at 1700 rpm for 20 min at 4°C and plasma was collected in cryovials for storage at −80°C until use. After thawing an 75 μl aliquot of plasma was added to 2 ml of TriReagent (Sigma Aldrich) and passed through a 20 gauge-needle for about 10 times. Then, proteinase K (Qiagen) was added to each sample with a final concentration of 0.05 mg/ml and samples were digested for 45 min at 56°C. Following incubation, each sample was passed through a 20 gauge-needle for about 10 times and centrifuged at 4000 rpm for 10 minutes at 4°C.

RNA extraction was then performed through the Qiagen RNeasy mini kit according to the manufacturer instructions. RNA was eluted in 30 μl of RNase free water.

To assess RNA integrity 1 μl of total RNA was analyzed through the Agilent 2100 Bioanalyzer and the RNA 6000 Pico LabChip, according to the manufacturer instruction. Electropherograms showed trace of RNA samples that could not be quantified, characterized by high fragmentation.

All primers for PCR amplification were designed through the Primer3 tool (http://biotools.umassmed.edu/bioapps/primer3_www.cgi). Primers sequences, together with amplicon size, are listed in Supplementary Table 1. Target gene sequences amplified by the primer pairs were evaluated with the BLAST software in order to check for secondary structures at the site of primer binding. Specificity of PCR products was checked through gel electrophoresis and DNA sequencing.

First, to eliminate possible genomic DNA contamination, 12 μl of RNA template was digested with DNase (Qiagen) for 10 min at 42°C and then used for the RT-PCR reaction. cDNA was synthesized using the Quantitect ReverseTrascription Kit (Qiagen) according to the manufacturer instruction. Next, we performed a PCR for the GAPDH gene (NM_002046.4), as an endogenous control, with the primer pair shown in Supplementary Table 1, at the following conditions: 94°C 2 min, 94°C 20 sec, 60°C 10 sec, 65°C 30 sec (40 cycles) and 65°C 2 min. The 109 bp PCR product was analysed through ethidium bromide staining following electrophoresis on a 2% agarose gel.

The amplified HMGA2 products were extracted and purified using the QIAquick Gel Extraction Kit (Qiagen) and sequenced through the Applied Biosystems 3730 DNA Analyzer Apparatus at the Molecular Biology Service (SBM) of the Stazione Zoologica “A. Dohrn” in Naples. Sequences were automatically aligned using ClustalW and hand-checked through the Bio Edit Software v. 7.0.5.3.

All analyses were performed on cancerous ovarian tissue and its normal counterpart, which were resected from patients at time of surgery and blood collection. Informed consent for the scientific use of biological material was obtained from all patients. 4 μm thick sections from paraffin-included ovarian cancer specimens were deparaffinised, cleared and antigens were retrieved by microwave irradiation. Slides were treated with a 3% solution of hydrogen peroxidase in methanol to block the endogenous peroxidase activity and then washed in a phosphate buffer solution before immunoperoxidase staining. Slides were then incubated at 4°C overnight with the primary antibody against HMGA2 (anti-rabbit, BioCheck, INC.) diluted 1:300 in a phosphate buffer solution. In the negative controls, the primary antibody was either omitted and replaced with pre-immune serum, or sections were pre-incubated with the HMGA2 control peptide before being challenged with the anti-HMGA2-specific antibody. Tissue sections were incubated with biotinylated anti-rabbit immunoglobulins, and then stained with streptavidin labelled with peroxidase; the signal was developed by using DAB the chromogen as substrate. After chromogen development, slides were washed, dehydrated with alcohol and xylene and mounted with cover slips using a permanent mounting medium.