Copyright: © 2022 Chiba et al. This is an open access article distributed under the terms of the Creative Commons Attribution License (CC BY 3.0), which permits unrestricted use, distribution, and reproduction in any medium, provided the original author and source are credited.

Background: Although HOXB9 induces tumor proliferation and chemoresistance in several cancer cells, little is known in pancreatic ductal adenocarcinoma (PDAC). In the present study, increased expression of HOXB9 in PDAC was associated with the induction of angiogenic factors and poor overall survival through the TGFβ pathway. Taken together, these results suggested that HOXB9 expression in PDAC could be a surrogate marker in clinical treatment.

Methods: In vitro, angiogenic factors, TGFβ signature, Epithelial Mesenchymal Transition (EMT) marker, and chemoresistance were examined in PDAC cell lines by HOXB9 knockdown system. And the reverse effect was confirmed by using TGFβ1 recombinant. Furthermore, in clinical specimens, the correlation between HOXB9 expression and TGFβ signature was analyzed, and the relationship with clinical outcomes were investigated.

Conclusions: In conclusion, HOXB9 expression could mediate angiogenesis, EMT, and cancer stemness through the TGFβ pathway, thereby resulting in chemoresistance and poor overall outcomes in patients with pancreatic cancer. Our results suggested that HOXB9 may clinically serve as a novel surrogate biomarker.

HOXB9, a member of the class I homeobox (HOX) genes, regulates various cellular signal transductions, including epithelial-mesenchymal transition (EMT), angiogenesis, and the maintenance of cell fate [1]. An increasing number of studies demonstrate that the HOXB9 gene is associated with cancer progression and resistance to chemoradiation [2, 3]. HOXB9 controls erythroblastic leukemia viral oncogene homolog (ErbB), TGFb pathway, and angiogenic factor, resulting in EMT, as well as tumor proliferation and chemoresistance; however, little is known about the expression of HOXB9 in pancreatic ductal adenocarcinoma (PDAC).

PDAC is the fourth-leading cause of cancer death and is known that five-year overall survival rate is about 5% [4]. Pancreatic cancer has invasion to surrounding organs at an early stage, causing distant metastasis [5]. Therefore, various pathological and molecular efforts have been made to improve postoperative progression and prognosis of PDAC.

In this study, it was clarified that the expression of HOXB9 causes enhancement of angiogenic factors and chemoresistance in patients with PDAC, and as a result, contributes to poor prognosis. HOXB9 could upregulate angiogenic factors and TGF signatures in vitro, and induce EMT and chemoresistance, upon reversal of effect by TGFβ recombinant. Taken together, these results suggested that HOXB9 expression in PDAC could be a surrogate marker in guiding clinical treatment.

The HOXB9 expression was examined in the samples from 102 patients with PDAC who underwent curative resection at our institute. HOXB9 mRNA was highly expressed in approximately 46% of the patients (Figure 1A). Specific patients’ data including clinical and pathological factors was showed in the Supplementary Table 1. Increased HOXB9 expression was significantly associated with poor disease-free survival (p < 0.001) (Figure 1B) and the prognosis for overall survival (p < 0.001) (Figure 1C), as previously reported for hepatocellular carcinoma [6]. Moreover, a positive correlation was significantly observed between HOXB9 expression and several TGFβ signatures (Figure 1D). 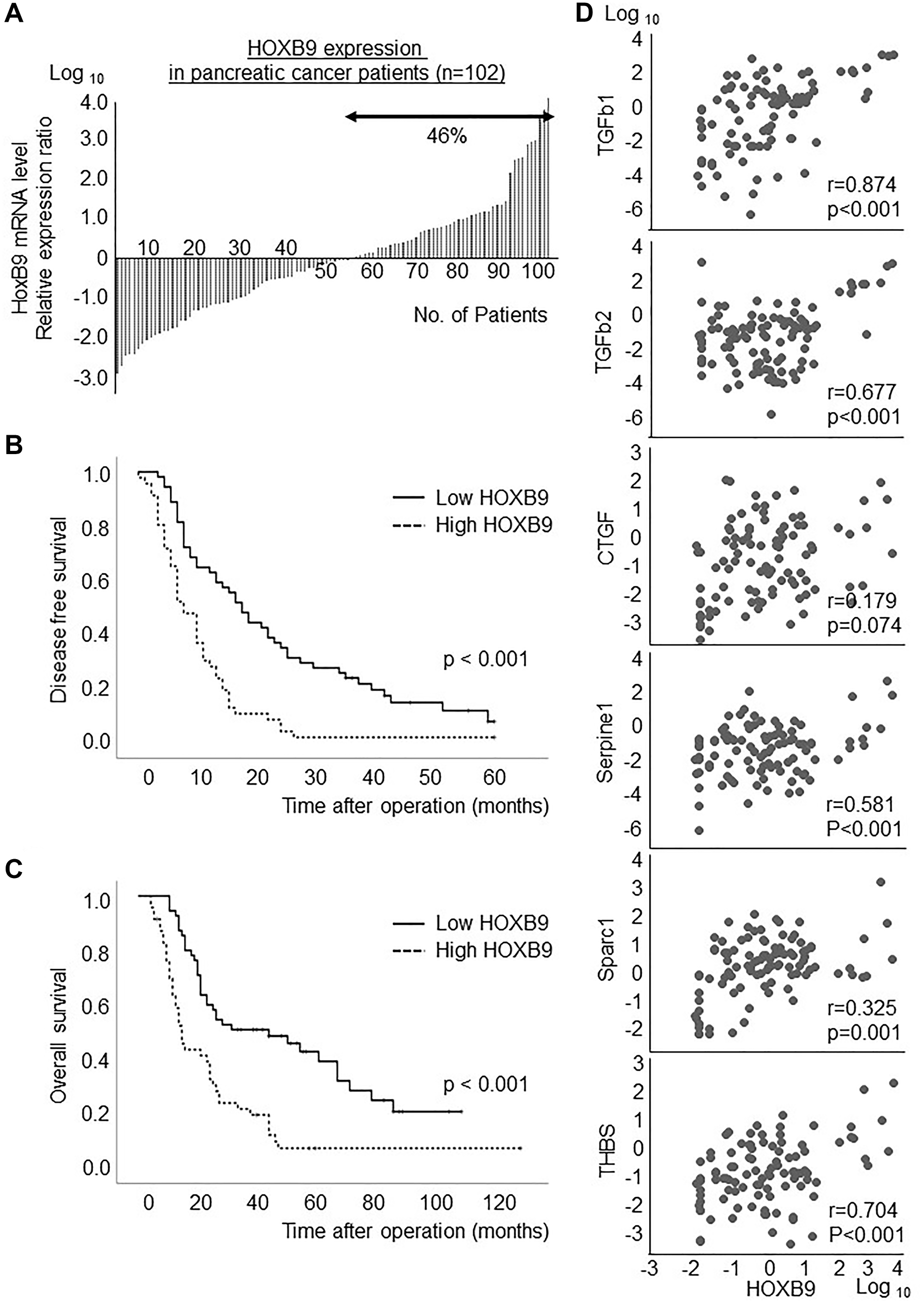 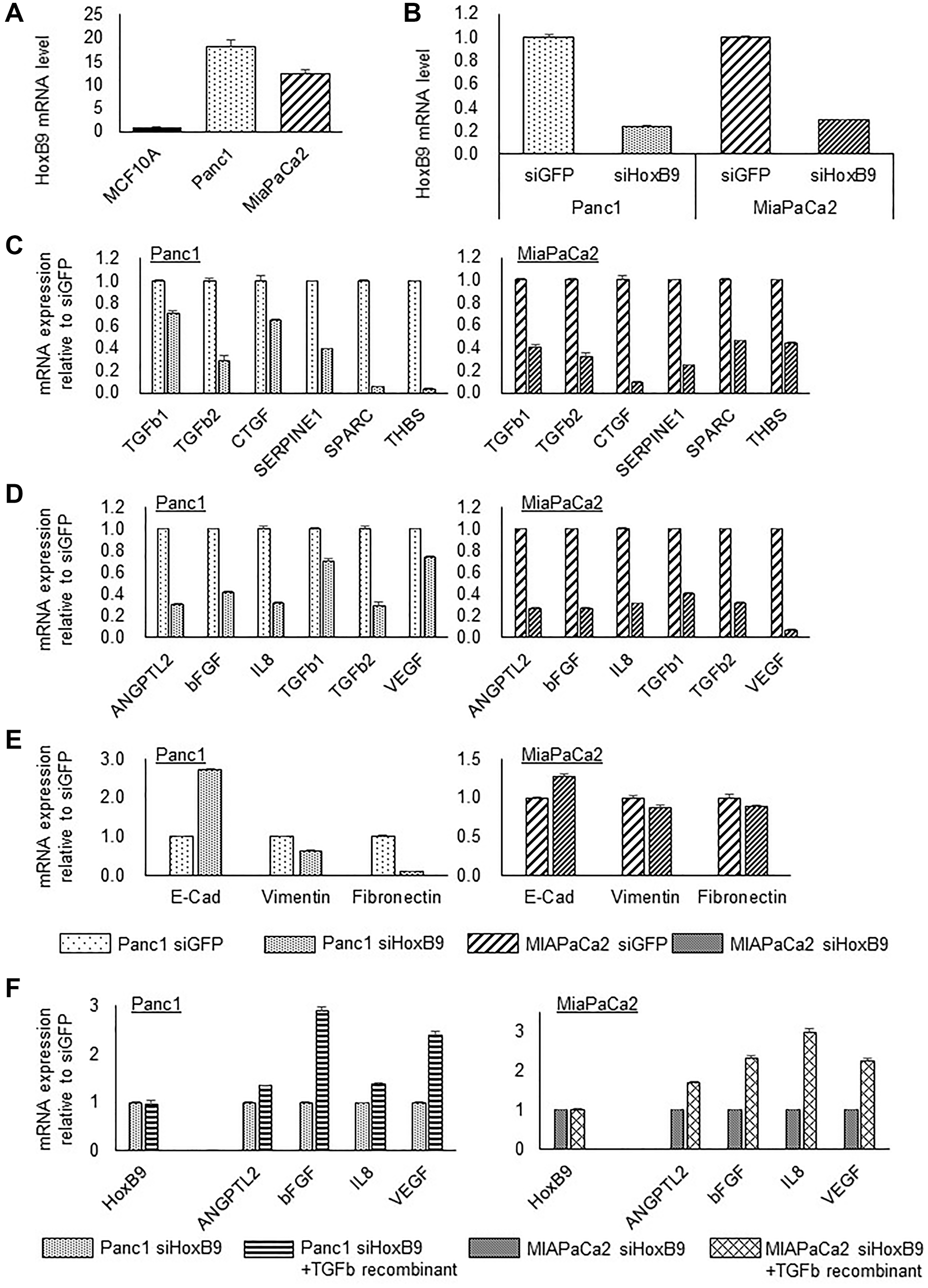 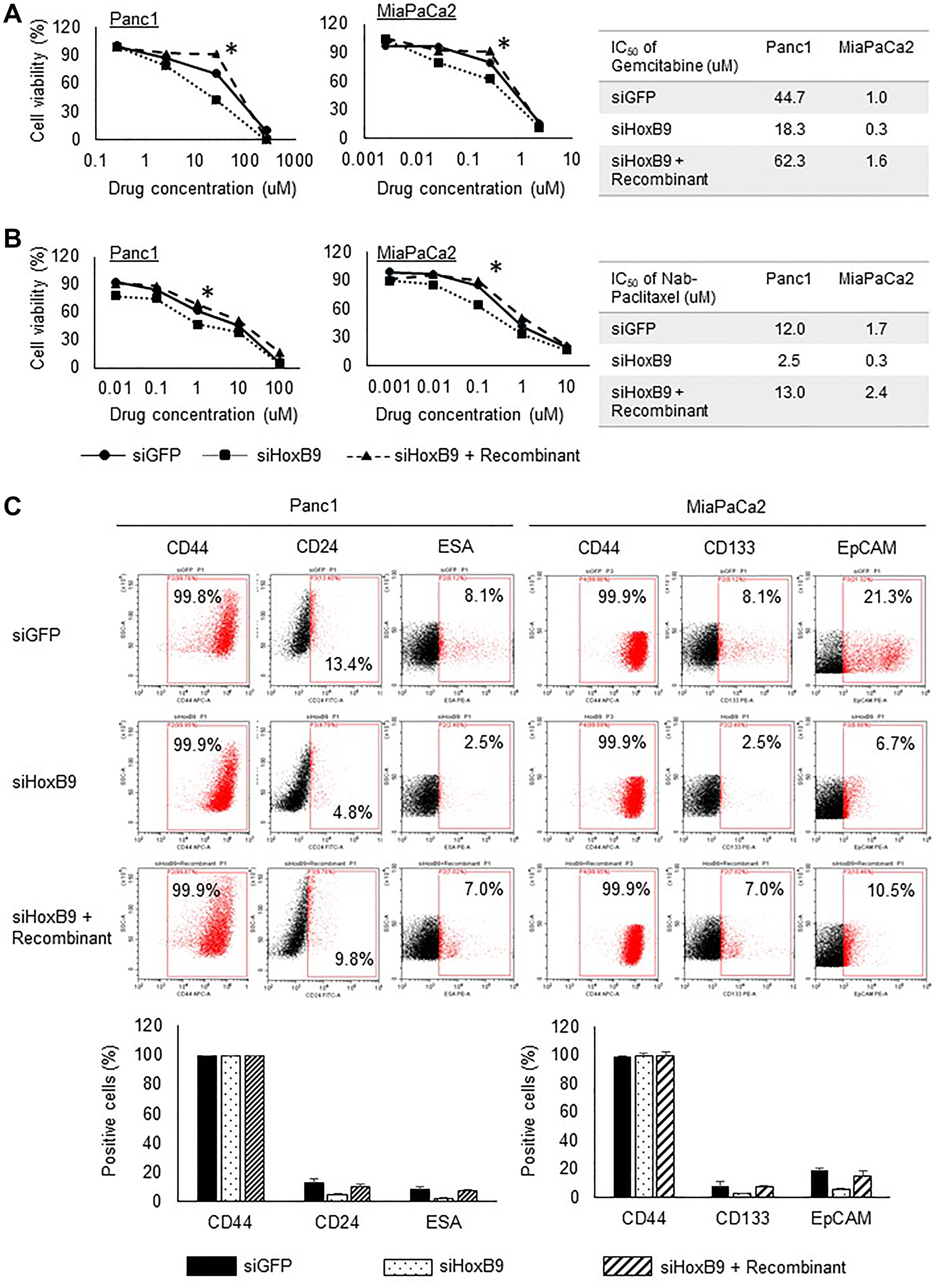 HOX family of proteins function as monomers or homodimers and regulate the transcription of downstream genes directly, thereby controlling various cell functions, including differentiation, apoptosis, cell motility, and angiogenesis [7, 8]. In particular, as a member of the HOX family of transcription factors, HOXB9 is crucial for thoracic skeletal element specification and mammary gland development [9, 10]. In addition to regulating important developmental functions, HOXB9 has been reported to be elevated in various tumor cells, including colorectal cancer, breast cancer, and hepatocellular carcinoma, wherein increased HOXB9 expression is a predictor of poor outcomes [2, 3, 6, 11, 12]. From a biological perspective, HOX-Biding site is known to exist in the promoter region of angiopoietin-like 2, IL8, TGF-β2, VEGF, and bFGF. AREG, ERG, VEGF, and bFGF. In the present study, we demonstrated that HOXB9 could promote the expression of angiogenic factors and EMT in pancreatic cancer through the TGFβ pathway. Signaling through the TGFβ cascade plays a critical role in the development of pancreatic cancer and may lead to tumorigenesis, EMT, enhanced stemness in cancer cells, and poor overall survival in patients with pancreatic cancer.

In this study, the hypothesis is that TGFβ signaling is an important signaling component related to the HOXB9 gene functions; all experiments were performed accordingly. TGFβ triggered an increase in the expression of mesenchymal markers and a concomitant decrease in that of the epithelial markers. TGFβ also constructs a preferential environment for the phenotypic transition and induces invasiveness in cancer cells. TGFβ stimulation causes the phosphorylation of Smad2 and Smad3 on the SSXS motif in the C-terminal residues, which results in the formation of a complex with the Smad4 common mediator and subsequent nuclear translocation [13]. The results showed that HOXB9 could strongly up-regulate the TGFβ cascade in the human pancreatic cancer cell lines, and the TGFβ recombinant induction contributed significantly to the reversal of trends observed in the siHOXB9 experiments. Thus, the regulation of TGFβ signaling in HOXB9 may be an important pharmacological pathway underlying the invasion and metastasis of pancreatic cancer cells.

Gemcitabine and nab-paclitaxel are widely used as first-line chemotherapeutic agents for the treatment of patients with pancreatic cancer. However, Various factors are intertwined in the mechanism of chemoresistance, and it is very difficult to understand clearly. Recent reports suggest that the tumor microenvironment plays a very important role in chemoresistance, wherein TGFβ signaling is important for the maintenance of healthy cells and it may regulate cancer invasion and metastasis, as well as chemoresistance through EMT [16, 17]. Our data suggested that TGFβ signaling induced by HOXB9 expression resulted in chemoresistance in pancreatic cancer cells through EMT.

We did not perform in vivo experiments but instead used the data obtained from resected specimens. The TGFβ signature and surgical outcomes were examined in clinical specimens. In vivo verification is also required in the future, however, we believe that the results from the clinical specimens substantially support the in vitro findings.

In conclusion, HOXB9 expression could mediate angiogenesis, EMT, and cancer stemness through the TGFβ pathway, thereby resulting in chemoresistance and poor overall outcomes in patients with pancreatic cancer. Our results suggested that HOXB9 may serve as a novel biomarker for selecting patients with pancreatic cancer who are more likely to benefit from chemotherapy and surgery.

The human PDAC cell lines, Panc1 and MiaPaCa2, were purchased from the American Type Culture Collection (ATCC, Manassas, VA, USA). The identity of all cells was independently confirmed by short tandem repeat genotyping in Sep 2021. Cell lines were cultured in RPMI 1640 medium (Sigma Chemical, St Louis, MO, USA) supplemented with 10% fetal bovine serum (FBS) at 37°C in a normoxic humidified atmosphere with 5% CO2. The cell lines were confirmed to be pathogen-free. The BIONIX-3 hypoxic culture kit (Sugiyama-Gen, Tokyo, Japan) was used to be cultured with hypoxic conditions.

Stealth™ RNAi siRNAs purchased from Invitrogen were used to knockdown the endogenous gene expression. Two siRNAs with different sequences of HOXB9 were independently transfected into cells at a final concentration of 100 nM using Lipofectamine RNAiMAX (Invitrogen). In the subsequent experiments, the siRNA sequence that could effectively suppress the target gene expression was used. siGFP was used as a negative control. These knockdown systems were verified by qRT-PCR. The sequences of all the primers used have been described previously [6, 18].

Frozen tissue specimens containing cancerous and correspondingly matched normal pancreas specimen were obtained from 102 patients who underwent surgical resection for pancreatic cancer between September 2008 and December 2013 at the Tokyo Medical University Hachioji Medical Center. All protocols were performed following the guidelines of the ethics committee of Tokyo Medical University.

The expression ratio (cancer to normal pancreatic cells surrounded by cancer cells) was examined using qRT-PCR. RNA was extracted from cells using the RNeasy kit (Qiagen, Valencia, CA, USA). Conditions for semi-quantitative amplification of cDNA were as follows: 95°C for 2 min, followed by 25 cycles of 95°C for 30 s, 56°C for 30 s, and 72°C for 60 s, with a final extension cycle of 72°C for 10 min. RT-PCR analysis was performed in triplicate for each sample on the Light Cycler 480 Real-Time PCR System using SYBR Green 1 Master Mix (Roche). The following program was run: pre-incubation for 5 min at 95°C, amplification for 45 cycles (10 s of denaturation at 95°C, 10 s of annealing at 57°C, and a 10-s extension at 72°C), for melt-curve analysis. These procedure of qRT-PCR is similar to that previously described articles [6, 18]. The mRNA levels of the target genes were normalized against the mRNA levels of GAPDH, which was used as an internal control. The sequences of all the primers used have been described previously [6, 18].

Cells were seeded on a 12- or 24-well culture plate or 10 cm2 dish and cultured for one day. TGFβ1 recombinant (H8541, Sigma-Aldrich, Germany) was transfected into the cells 48 h before extraction of mRNA and protein. The concentration of DMSO was finally adjusted to be 0.05% or less.

Cells in the 96-well plates were treated with gemcitabine or nab-paclitaxel at final concentrations of 0.001–1000 μM for 72 h. Next, the MTT reagent (Sigma, St. Louis, MO, USA) was added, and the cells were cultured for 4 h before the absorbance was measured at 450 nm. Cell viability was calculated as the amount of MTT converted relative to the control cells without chemo reagent treatment.

Bars represent the mean ± standard error of the mean. Comparisons between groups were made using a two-tailed t- or U-test for continuous variables and the Fisher’s exact test for comparison of proportions. Correlations were calculated using the nonparametric Spearman coefficient. All calculations were performed using the SPSS software (SPSS 24.0). Overall survival (OS) curves were plotted according to the Kaplan–Meier estimates and compared for significance using log-rank tests. Statistical significance was set at P < 0.05. These statistical processing is the same as in the previous articles [6, 18].

The study was approved by the ethics committee of Tokyo Medical University.

This study was approved by the patients` consent of publication.

This research was funded by a JSPS KAKENHI Grant-in-Aid Scientific Research (C) (number 25861217 and 21K08694) and by the Tokyo Medical University Cancer Research Foundation.